Not since the legendary Servicar, which happened to be the longest-running production Harley-Davidson model (1932-1973) rolled off the assembly line, has the Motor Company manufactured a factory-produced trike. 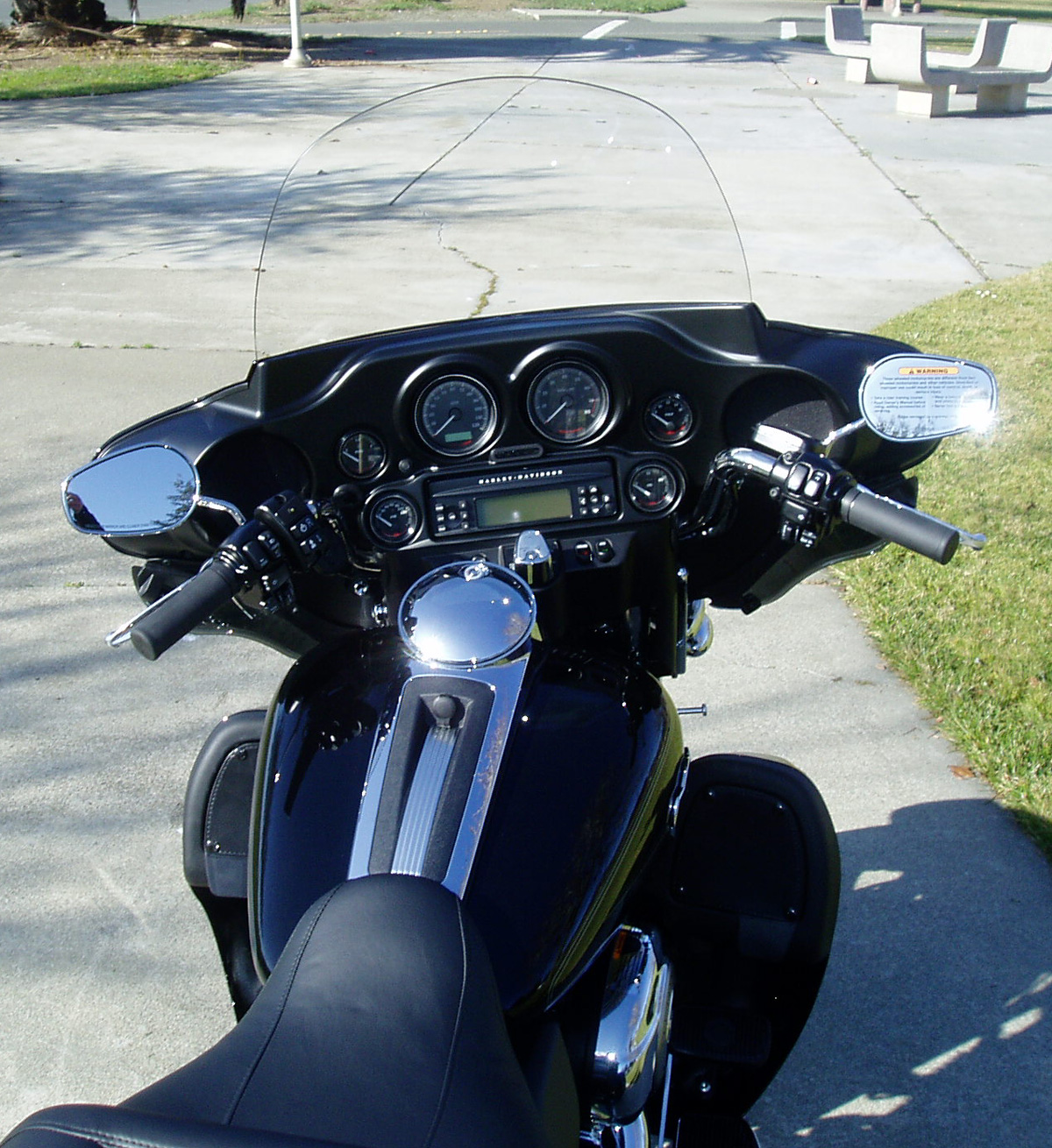 In appearance, the new FLHTCUTG Tri Glide looks like an Ultra Classic Electra Glide from the front to the back trailing edge of the 103 cubic-inch motor -- and it actually is, except for a few nuances such as the rake angle, front stabilization damping strut and braking set-up.

The Tri Glide Ultra Classic is not a production afterthought, but rather is based on a new chassis that has been specifically designed for a three-wheel application, while providing the same classic styling and touring capability of Harley-Davidson's Ultra Classic Electra Glide.

In developing the Tri Glide, the H-D engineering folks set about creating a frame and associated chassis structure designed to specifically handle the steering force loads and overall increased weight of a three-wheeler.

A new rear-axle assembly was designed for the Tri Glide, utilizing an aluminum center section with steel axle tubes. High-strength and low-maintenance advantages of belt final drive are retained, along with the smooth operation of a rubber-cushioned, compensated rear drive. The rear suspension features dual air-adjustable rear shock absorbers. 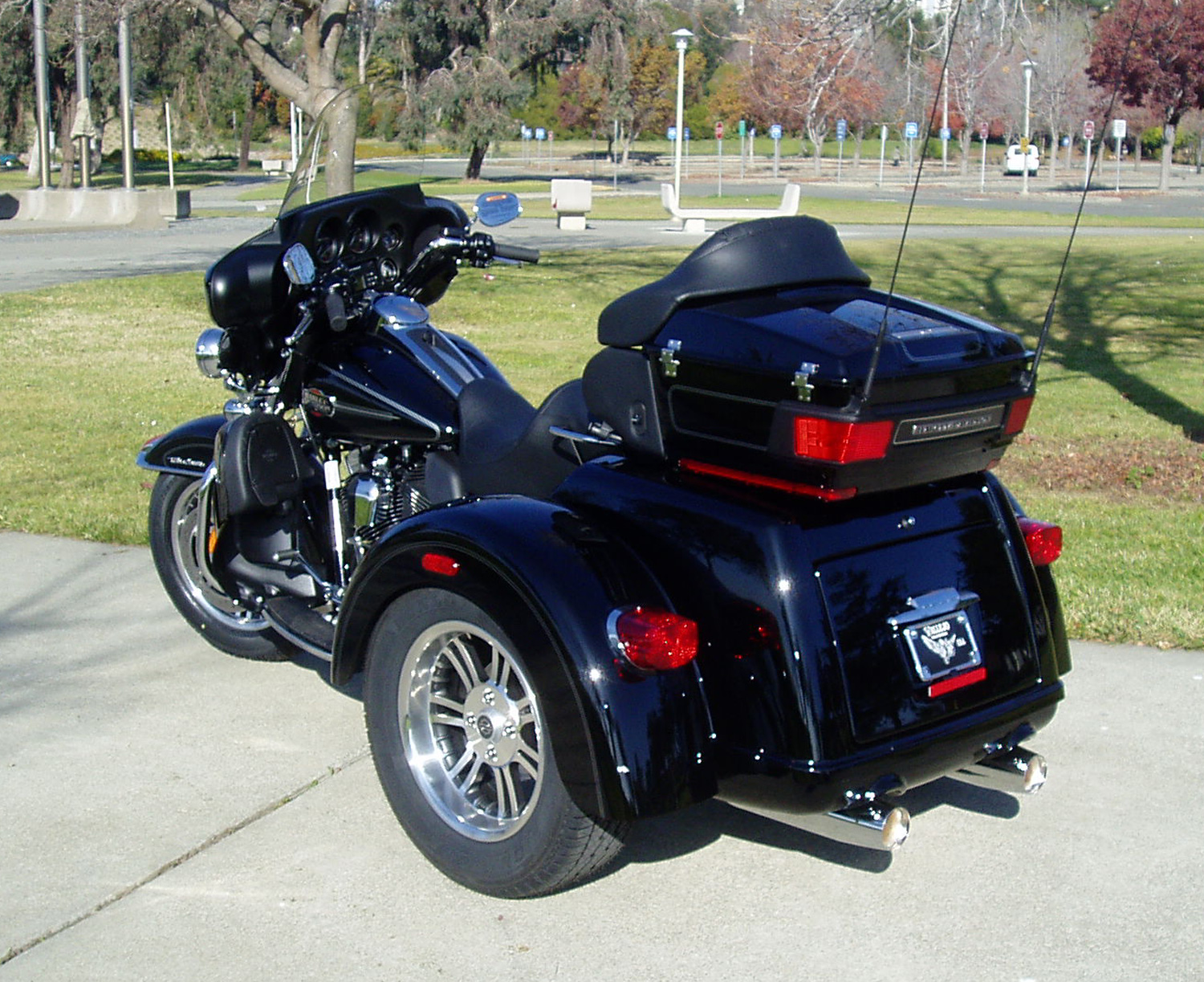 Power for the Tri Glide comes from a Twin Cam 103 V-Twin engine with Electronic Sequential Port Fuel Injection. The motor is Black powder-coated with a chrome treatment, and delivers 101 lb.-ft. of torque. It mates to the same 6-speed Cruise Drive transmission used on Harley's other touring bikes. Two-into-One-into-Two Dual mufflers with tapered end caps exit below the trunk.

An optional electric reverse is available for an extra $1,195 and is integrated with the rear differential assembly, which is engaged with a handlebar-mounted reverse module. Bringing the Tri Glide to a halt are Brembo dual front disc brakes and a Hayes Brake dual-disc rear brake system with a lever-actuated, integrated park brake. Throttle control is electronic.

The Tri-Glide rides on matching front and rear black and machined seven-double-spoke cast aluminum wheels. Up front is shod with a H-D Dunlop MT90B16 tire, while the 15-inch rear wheels are 5 inches wide and are fitted with P205/65R15 tires.

My test Tri Glide Ultra Classic was finished in Vivid Black with Silver striping. The base price was set at $29,999, but my test unit also featured the optional electric reverse and Smart Security System, which along with dealer prep and handling bumped the price to $31,794.

SUMMARY: The FLHTCUTG -- pronounced "flat-cuty-gee" -- just kidding; the traditional Harley-Davidson model coding isn't really a word, it simply stands for the new three-wheeled 2009 Tri Glide Ultra Classic. I'm not a big fan of trikes, but this one is by far, one of the best non-traditional motorcycles, since it was engineered from the outset with its specific purpose in mind, rather than being an aftermarket modification that results in a trike.

The Tri-Glide provides great stability over traditional two-wheeled transport. In other words, you don't have to put your feet down when stopped. There's also no counter-steering involved. Passengers tend to feel considerably more secure on a trike, since it obviously doesn't lean.

The bigger, 103-inch motor is a definite plus over the basic Ultra Classic's 96-incher, due to the significant weight increase. The Tri Glide tips the scale at 1,139.6 pounds dry, rendering it exceptionally stable and pleasurable when traveling in a straight line, but it is a force to be reckoned with should one have to make a sudden turn. In fact, turning even under ordinary conditions requires more force than a conventional bike, and leaning won't help. The Tri Glide is essentially for the more casual tourer at heart.

The Tri Glide is an extraordinary three-wheeler if you want or need a three-wheeler. The electric reverse gear is a bit quirky and "clunky" in operation, but it certainly beats no reverse at all when you're pushing a rig that's over half a ton. It is certain to fill an important niche in the marketplace.