In case you haven't noticed lately, nearly all sportbikes tend to look alike. Try picking out a manufacturer's bike on a racetrack for example; it's nearly impossible to tell them apart as they whiz by at triple digit speeds. It's even difficult to differentiate sportbikes from a distance of 50 feet when they're stationary. 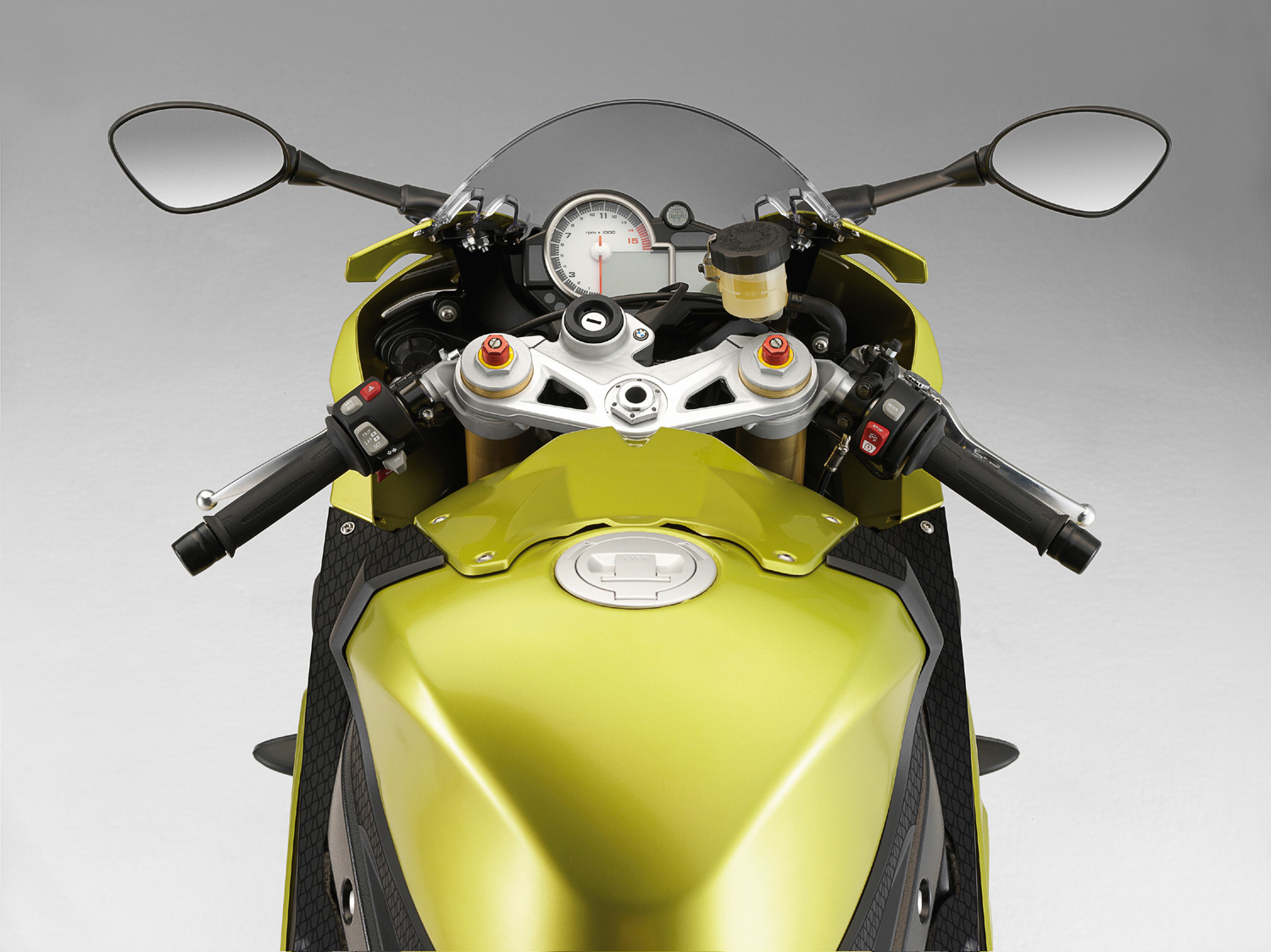 Obviously, to stand out in a crowd, there has to be something different to set one bike apart from another. So what's the solution? How about an asymmetrical superbike. BMW's S 1000 RR is such a bike, developed to compete for the first time, representing BMW Motorrad in the World Superbike Race competition. Why? To attract a younger, more affluent consumer base that is drawn to the superbike genre.

The BMW S 1000 RR is a highly technical motorcycle engineered to do battle on some of the world's most challenging race tracks, competing with existing players such as Aprilia, Ducati, Honda, Kawasaki, and Suzuki.

The S 1000 RR is BMW's very first superbike, representing a whole new world of pure power, inspired by BMW's F1 auto racing expertise. The engine is a 999cc, 16-valve, liquid-cooled, transversely mounted in-line four-cylinder with BMS/KP electronic fuel injection that delivers 193 horsepower at 13,000 rpm, along with 83 lb.-ft. of torque at 9,750 rpm. The motor connects to a six-speed manual transmission with a dog-type shift that meters energy to the rear wheel via the final drive chain.

The BMW S 1000 RR doesn't look like every other super sportbike on the planet. It delivers an innovative and unique asymmetrical approach to motorcycle design. 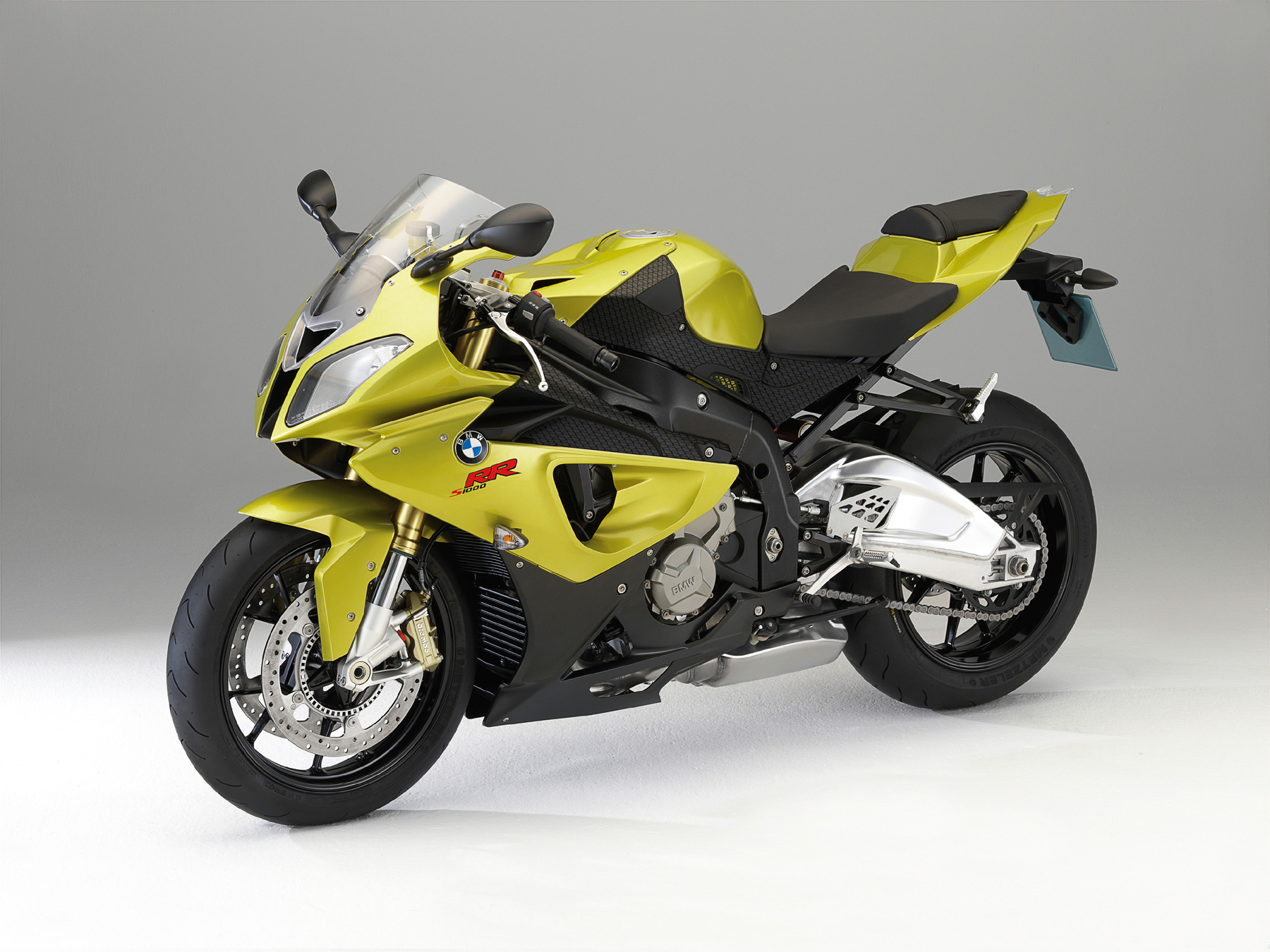 Both the right and left sides display a different look aside from having the exhaust on one side or the other (the S 1000 R's 4-2-1 stainless steel exhaust exits on the right side by the way). The headlights each receive a unique look: the right side light is round, while the lamp on the left side receives a trapezoidal or "cat-like" treatment. The low-slung fairing differs from side to side as well. On the right are slotted openings that appear "gill-like," and on the left, is a larger, trapezoidal singular opening. The taillight treatment, which caps of the high-jutting rear end, is stylishly different. It features a jewel-like affair that illuminates with red LEDs set behind a clear lens.

The production bike is the only super sports machine with race ABS and Dynamic Traction Control. The DTC system provides the rider with four different mappings: Rain, Sport, Race, and Slick.

The Rain setting's purpose is obvious while the Sport mode is intended for normal road conditions. The Race mode is for use on the track with treaded rubber, while the Slick mode is for track use with slick tires. All but the Slick mode may be selected via a handlebar-mounted switch. Activating the Slick mode calls for inserting a jumper plug into the engine management's black box. The Slick mode also enables the DTC system's "wheelie" control to be partially deactivated, making it possible to hold wheelies for up to 5.0 seconds. Slowing or bringing the bike to a halt is handled by Brembo dual-disc brakes up front and a single disc aft.

The S 1000 RR's frame is twin-spar aluminum alloy with a bolt-on, square-tube subframe, allowing the wheelbase to be adjusted by 1.8 inches, moving the rear axle forward or backward. The Sachs made suspension consists of a double-sided aluminum alloy swingarm with single rear shock and inverted cartridge front forks that feature color-coded adjustable compression damping, rebound damping and spring preload to eliminate confusion.

I was afforded the opportunity to view and to straddle preproduction versions of the S 1000 RR at the Miller Motorsports Track in Tooele, Utah, and to watch BMW superbike team members Troy Corser and Ruben Xuas compete in the World Superbike race on the 4.907 mile road course at speeds exceeding 200 mph on the long straight. Actual production units won't become available in the U.S. until very late this year, with the international press launch likely taking place at a F1 track in Portugal. Pricing will begin at $13,800 for a base model, and considerably under $20,000 for a fully loaded bike with Race ABS, DTC and gearshift assist.

The BMW S 1000 RR promises to deliver on BMW's quest for a share of the world market its first-ever superbike, which represents a visually pleasingly and refreshingly different approach to the growing motorcycle category.