The three-wheeled 2010 Can-Am Spyder Roadster is a little bit roadster, part convertible sports car, but is a motorcycle -- at least in spirit and concept. The Spyder comes with its two wheels forward and the single wheel trailing aft, which acts as the drive wheel. 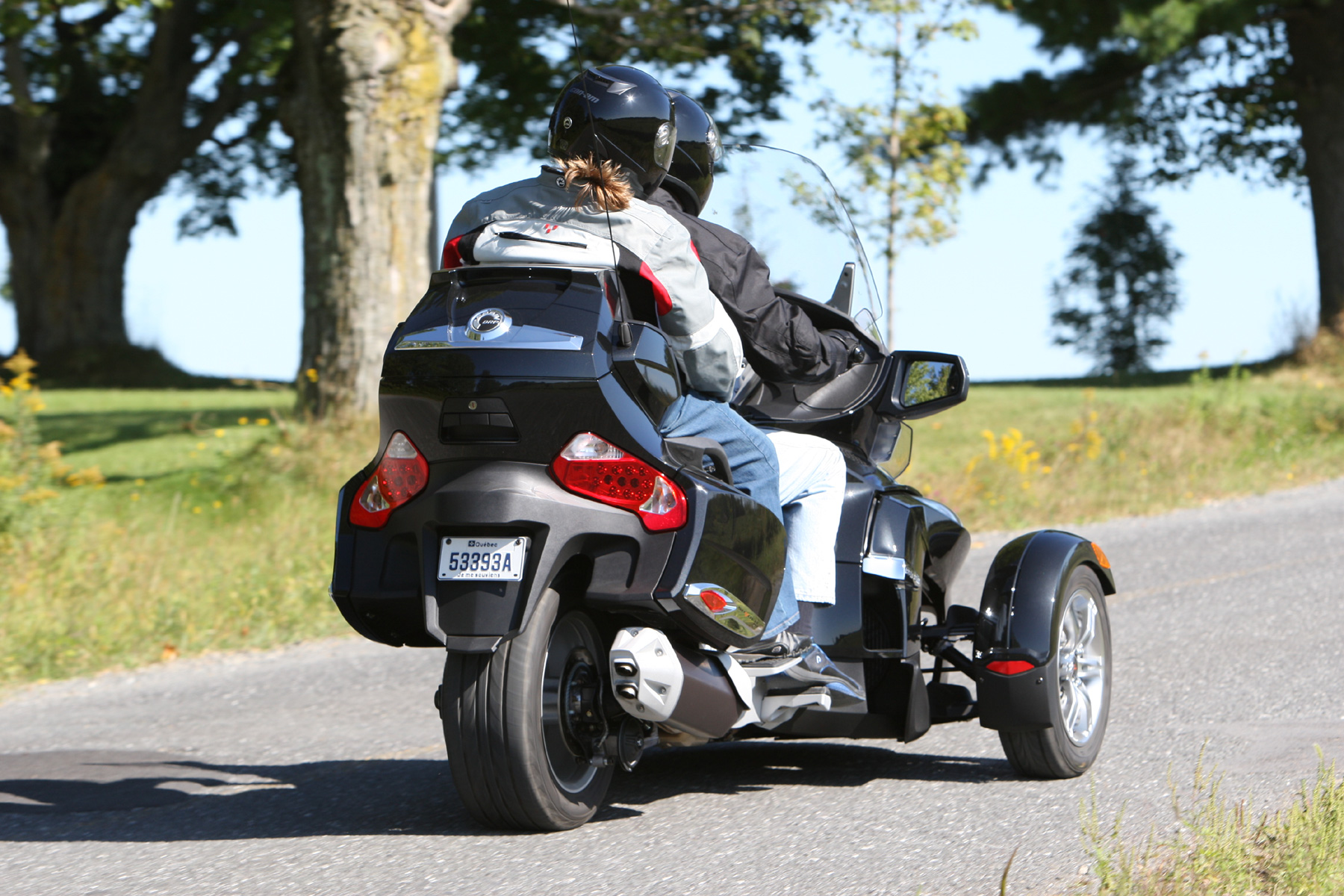 The Can-Am Spyder RT Roadster's styling and design is edgy, contemporary and futuristic all in one. It is radically different from everything else on the road. It doesn't look like a motorcycle, car or trike. It may best be described as a "rider-active" vehicle with a large streamlined, watertight trunk located in the nose, combined with a rear trunk and integrated and damped side bags that may be opened with the passenger still comfortably seated.

Power for the Can-Am Spyder Roadster comes from a Rotax 991 cc, DOHC, 8-valve V-Twin, liquid-cooled motor, with electronic multi-point fuel injection. Exhaust is two-into-one, with a catalytic converter. The motor mates to either a sequential five-speed manual (SM5), or an optional, electronically controlled, clutchless five-speed semi-automatic (SE5), which still requires shifting up through the gears. 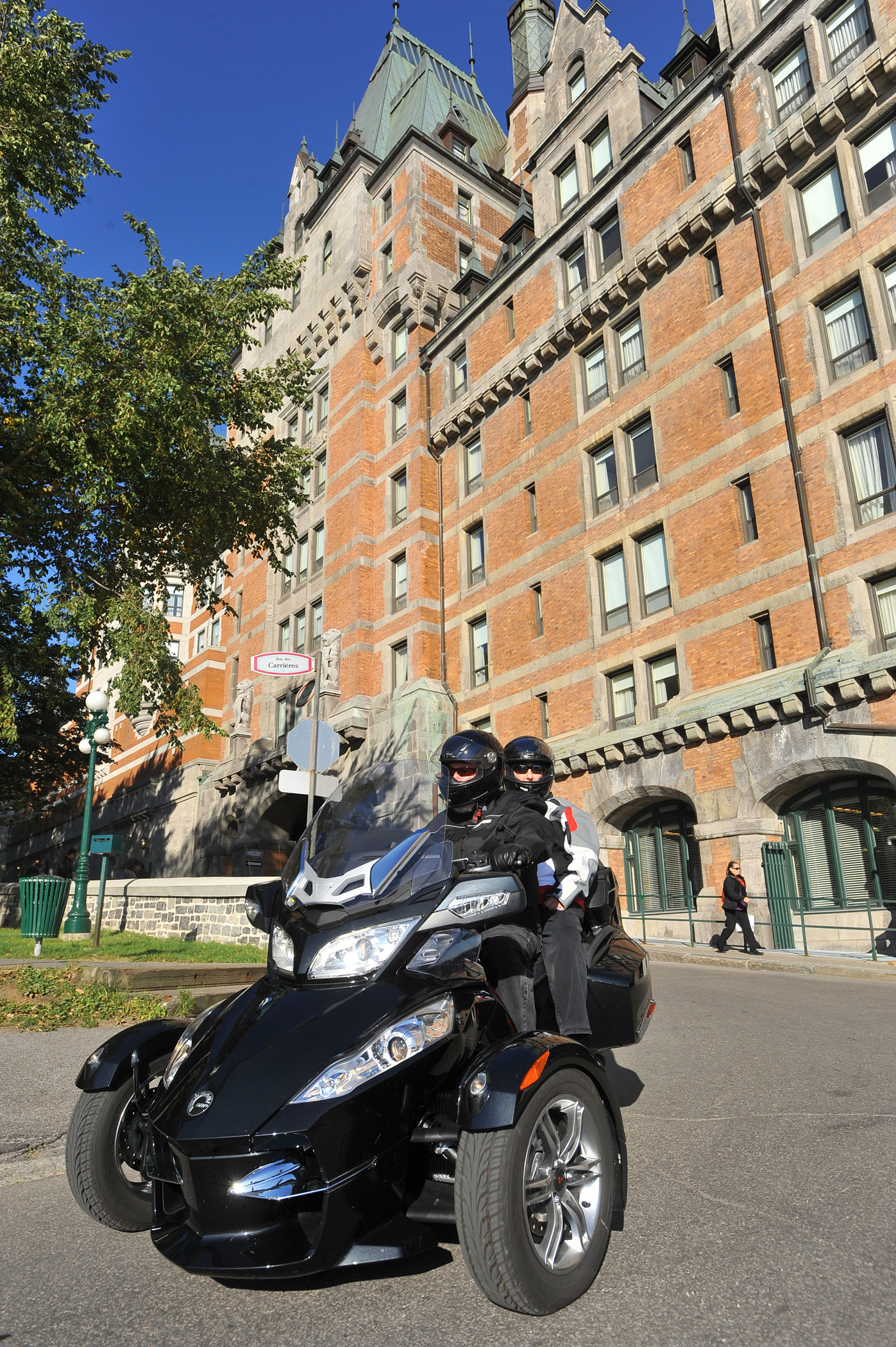 The Can-Am Spyder Roadster runs on regular fuel and can travel from 0-60 mph somewhere north of 5 seconds, with a top speed determined by load, but pushing over 90 mph.

The unique 991cc Rotax motor mounts in a steel frame, utilizing Surrounding Spar Technology, which contributes to its stability. The front suspension consists of a double A-arm with adjustable cam, anti-roll bar and 5.67 inches of travel, while the rear suspension features a single swing-arm with mono-shock, electronically adjustable cam with self-leveling and 5.71 inches of travel. The front wheels are not articulated and do not lean into turns.

The tires are produced by Kenda specifically for the Spyder -- 14-inch in front and 15-inch for the rear -- mounted on attractive three-double-spoke alloy wheels. There is no traditional hand brake on the Spyder, instead, there's a foot-actuated, fully integrated hydraulic 3-wheel braking system with dual discs forward and a single disc aft, handling halting the three-wheeler.

Foot controls (brake and shifter) are mid-mounted on the manual gearbox version Spyder. Shifting gears on the automatic transmission equipped Spyders is accomplished by a toggle lever by the left-hand grip. 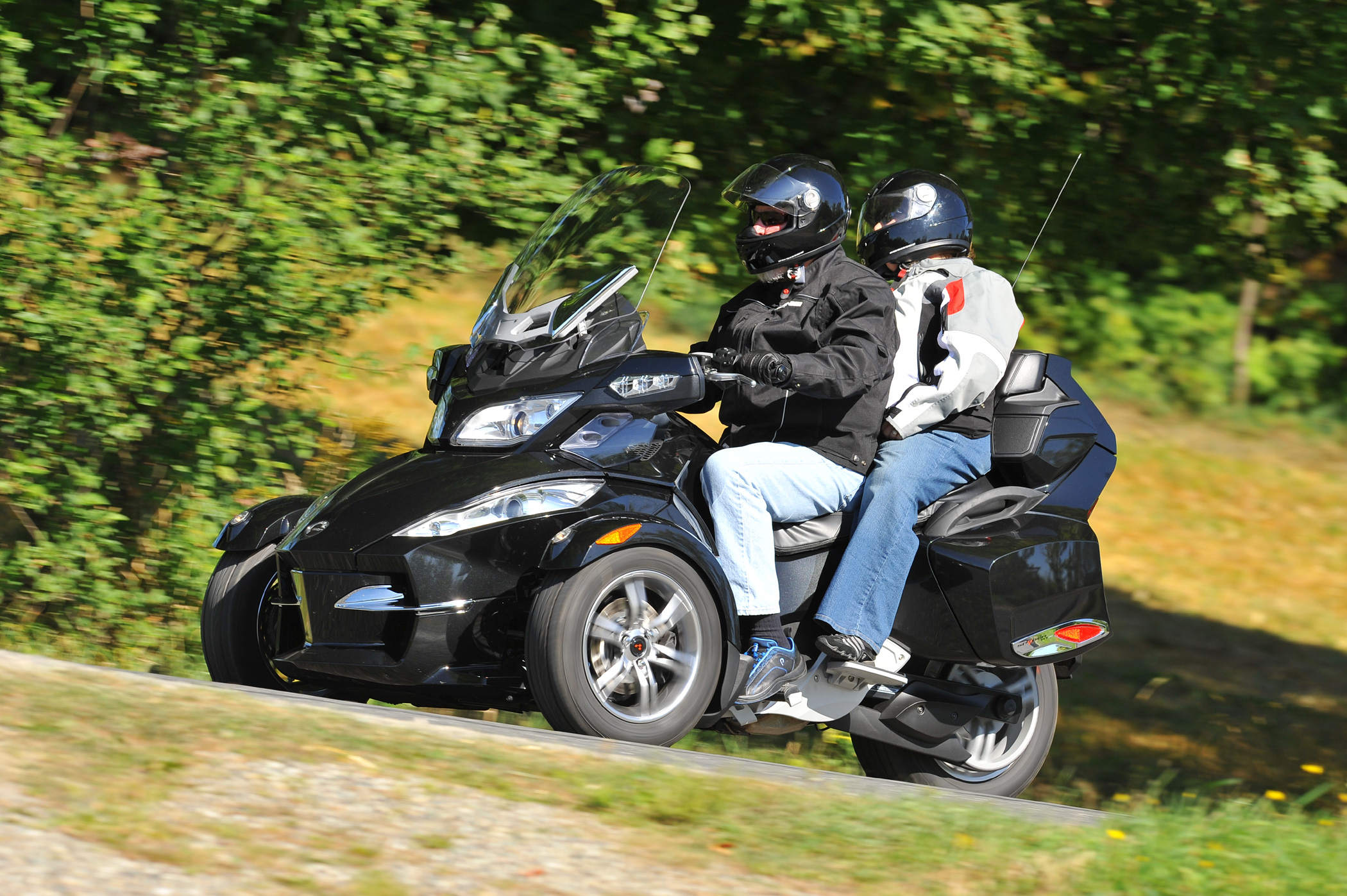 My test Spyder Roadster was an RT-S model with the manual transmission. It definitely fills the bill for the bike-touring crowd. The RT Spyder has bars pulled back and rider pegs set forward for an optimum riding position. Passengers are provided with height adjustable, folding floorboards, a plush backrest ample side bolsters and side hand grips.

Non-bikers will have no problem learning to ride the Spyder Roadster. They may even have an advantage with nothing to "unlearn". Experienced traditional bike riders on the other hand, will have some adapting to do. Counter-steering is out the window, there's no hand brake and with the optional electronic shift version, there's not even a clutch lever. Another advantage offered by the Spyder is that you don't need to put a foot down when coming to a stop.

The Can-Am Spyder RT-S Roadster represents a near perfect balance between performance and peace of mind, having been built to become a part of both rider and passenger and designed to set them apart from the status quo.

The three-wheeler is quite comfortable, and should open the door to a simpler kind of "wind-in-your-face" motoring for many who were put off by the perceived potential hazards of two-wheeled cycling.