The Burgman from Suzuki has been around a few years now, available as both a 400 and a 650 model. What is a Burgman you might ask? It's a high-end scooter made by Suzuki. 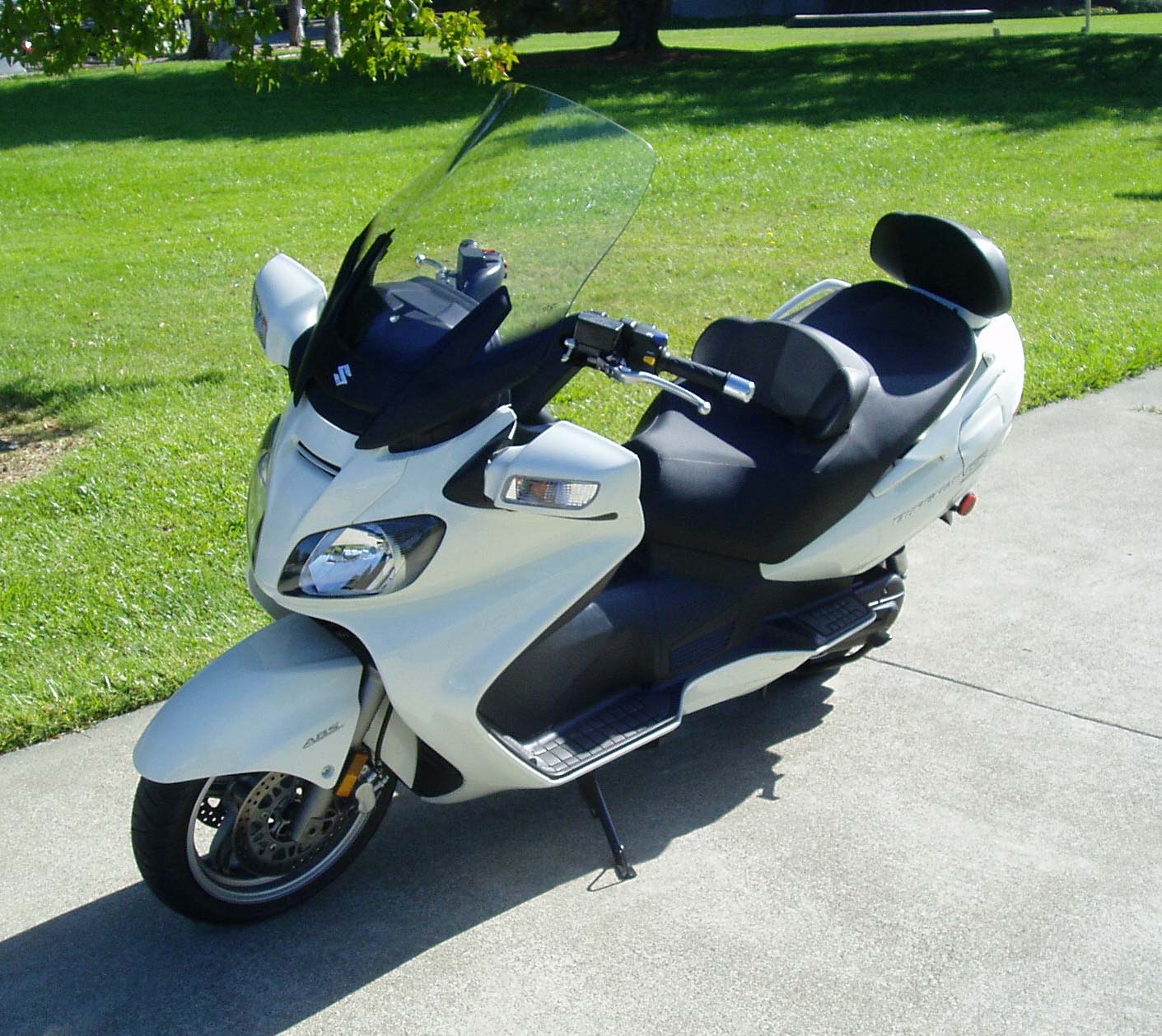 Burgman seems like an unlikely name for a Japanese-produced two-wheeler, so I asked how did it get that name? I was informed it originated from the German term "Burg" which stands for a town or village governed by a leading man. Huh? I don't see what it has to do with the price of rice in China (oops, Japan).

The Suzuki Burgman viewed from the front looks for the entire world like a sport bike, but in profile, it definitely takes on the persona of a scooter, with no visible engine and a traditional step-through mounting.

The headlights are widely-spaced "cat-eye" affairs, and the rakish windscreen add to the purposeful sport bike appearance up front, creating a smooth air flow over the rider, while the updated taillights wrap deeply into the body sides for a clean effect. 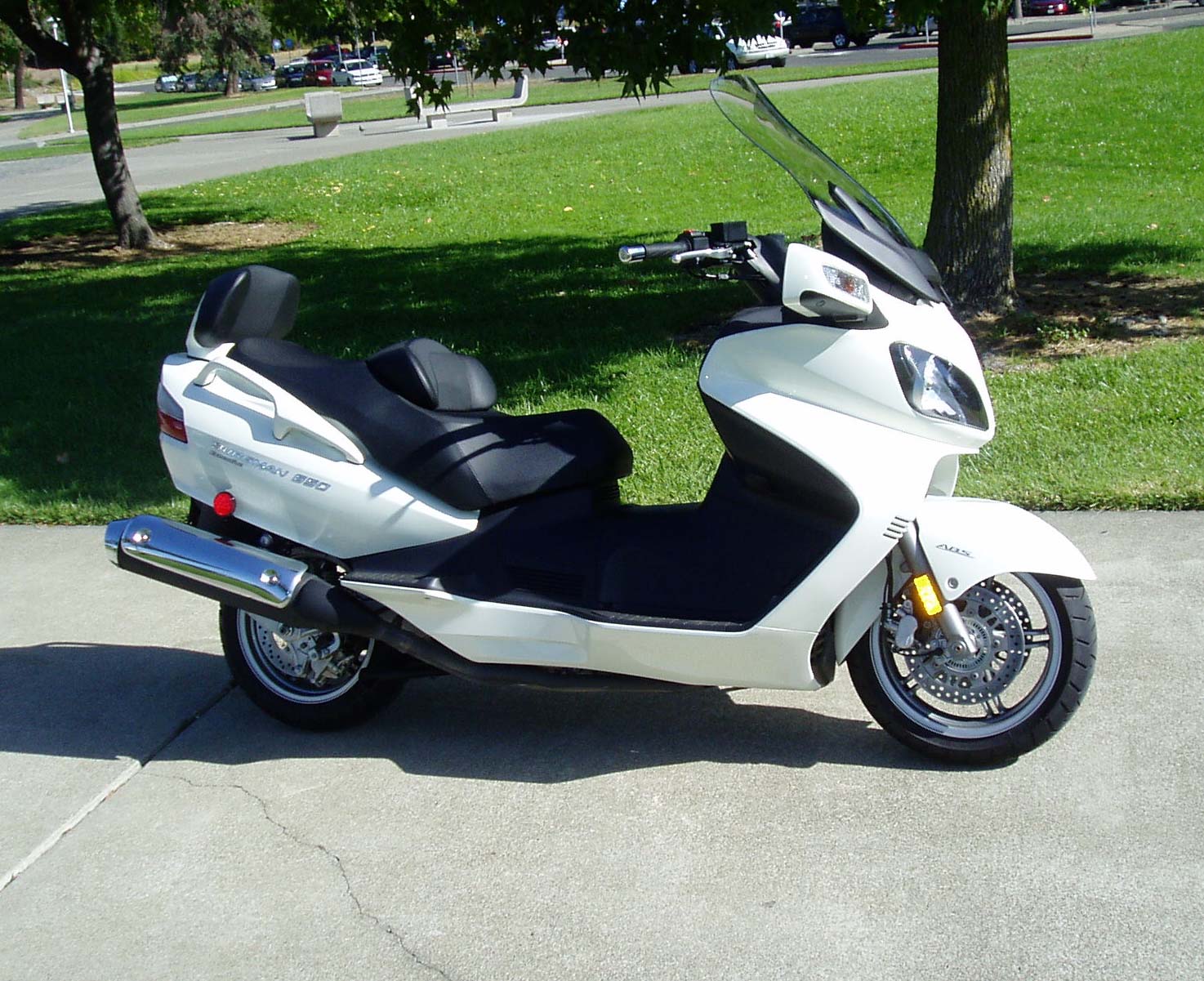 Motive force for the Burgman 650 Executive comes from a 638cc four-stroke, liquid-cooled, DOHC, 8-valve, twin-cylinder with electronic fuel injection. Power is delivered to the rear wheel through Suzuki's Electronically Controlled Continuously Variable Transmission via a final gear drive, that at first appears to a shaft drive assembly. The 4.0-gallon fuel tank allows for a satisfying range that consistently measures in excess of 150 miles, even when cranked up near the limit.

The Burgman 650 rides on Bridgestone Battlax tubeless rubber (15-inch up front and 14-inch in the rear), mounted on 5-swirl-spoke alloy wheels. Front suspension consists of telescopic forks with coil springs and oil damping and 4.3 inches of travel. The rear suspension is of a swing arm, link-type configuration, also with a coil spring, oil damping and adjustable pre-load. Rear suspension travel is 3.9 inches. Bringing the Burgman 650 to a halt is handled by hydraulic dual discs forward, and a single disc aft.

Wheelbase of the Burgman 650 measures 62.8 inches, with the overall length registering 89.0 inches. It weighs in at 611 pounds dry and the stepped dual seat (which is designed to carry both rider and a passenger in comfort), height is 29.5 inches.

The riding position is exceptionally comfortable aboard the Suzuki Burgman 650 Executive, with plenty of room to stretch out the rider's legs. The ignition switch features a tamper-resistant magnetic cover, along with a special cut-away section that allows for the use of a chain-type lock for securing the frame and bodywork to an immovable object. There's also a fork lock. 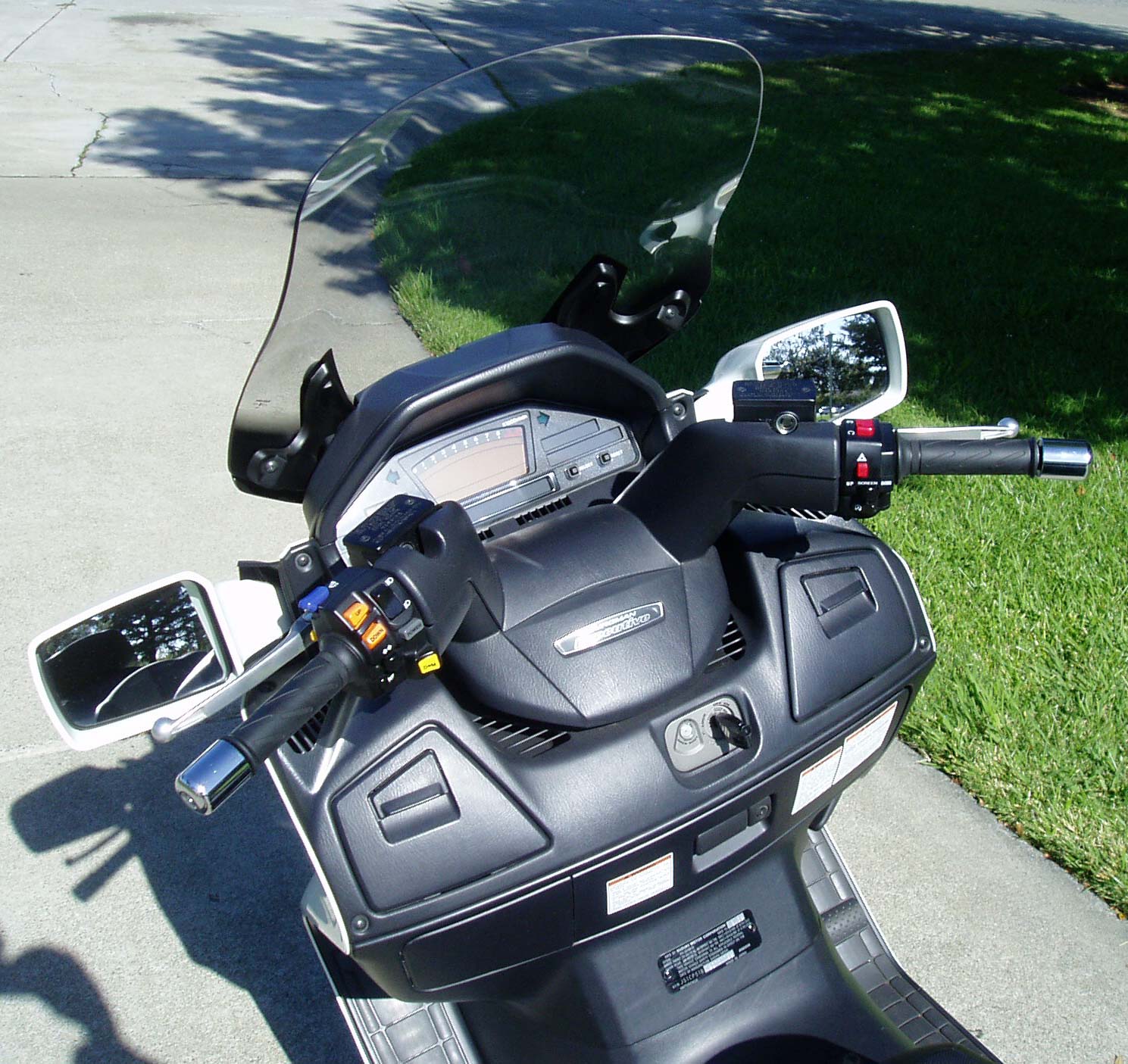 My test scooter sported Diamond White metallic bodywork with black upholstery. The base price was set at $9,799 while dealer prep and handling elevated the final total by another $500 to $10,299.

Obviously, there are lots of testosterone loaded male riders who shudder at the prospect of being seen aboard a scooter of any size, shape or form, but there's nothing wimpy, or to be ashamed of when riding the Suzuki Burgman 650 Executive. Okay, so there's no big V-twin exhaust note, but the fuel economy delivered by the Burgman is a heck of a lot better, and neighbors won't be annoyed when you fire up to take off on an early Sunday morning ride.

The balance is superb and the ride quality is smooth, despite the fact that I didn't adjust the rear suspension pre-load. Had I done so, I'm sure the ride would have been even smoother. Acceleration is rapid even in the automatic mode, and the 650 Executive is comfortable cruising at 70 or 75 mph, with more room to roll on more throttle.

If manly men can get past the sissy notion of riding a scooter, then I think they'd be pleasantly surprised. It's actually a lot of fun, and has more power to offer than many motorcycles, and it's more comfortable and more economical to operate as well.