The 2011 Victory 8-Ball lineup consists of the Vegas 8-Ball, the Kingpin 8-Ball, the Hammer 8-Ball and at the head of the pack, the Victory Vision 8-Ball. 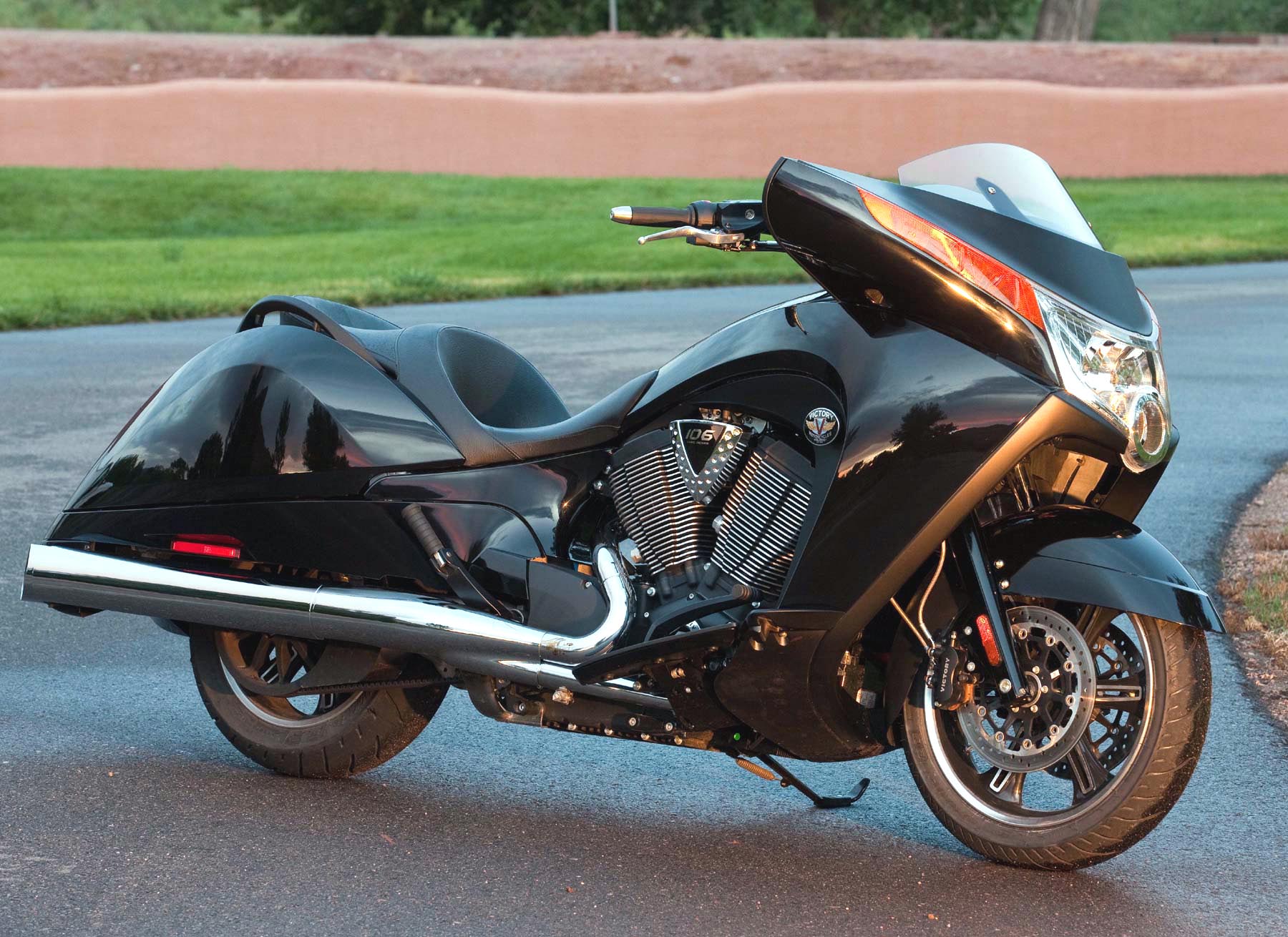 The first three models are powered by the new 97 horsepower Freedom 106/6 Stage 2 V-Twin. The motor mates to a new and improved six-speed constant mesh overdrive transmission, capable of cranking out up to 97 horsepower, along with 113 lb.-ft. of torque.

The biggest bike in the 8-Ball lineup is the Victory Vision 8-Ball, also powered by the new Freedom 106/6 V-Twin, but in stage 1 form producing 5 horsepower and 4 lb.-ft. of torque less than the smaller bikes with the Stage 2 version.

All of the bikes come in solid Black with no graphics and feature blacked-out components such as handlebars, exhaust (except the Vision 8-Ball which has chrome exhaust pipes), wheels, belt guards, frames, bodywork, side stands and more. The Vision 8-Ball also lacks ABS as standard fare.

Visually, the center character line runs the entire length of each bike from the front composite fender, through the headlamp and fuel tank, and continuing through the rear fender to the stylized "V" taillight of the Vision example. The streamlined, extended tank also features a distinctive side sculpting, as do the contoured, composite, lockable hard sidebags. The fuel filler cap is positioned to the right of the centerline of the otherwise uncluttered tank top -- the only non-symmetrical styling cue on the bike. 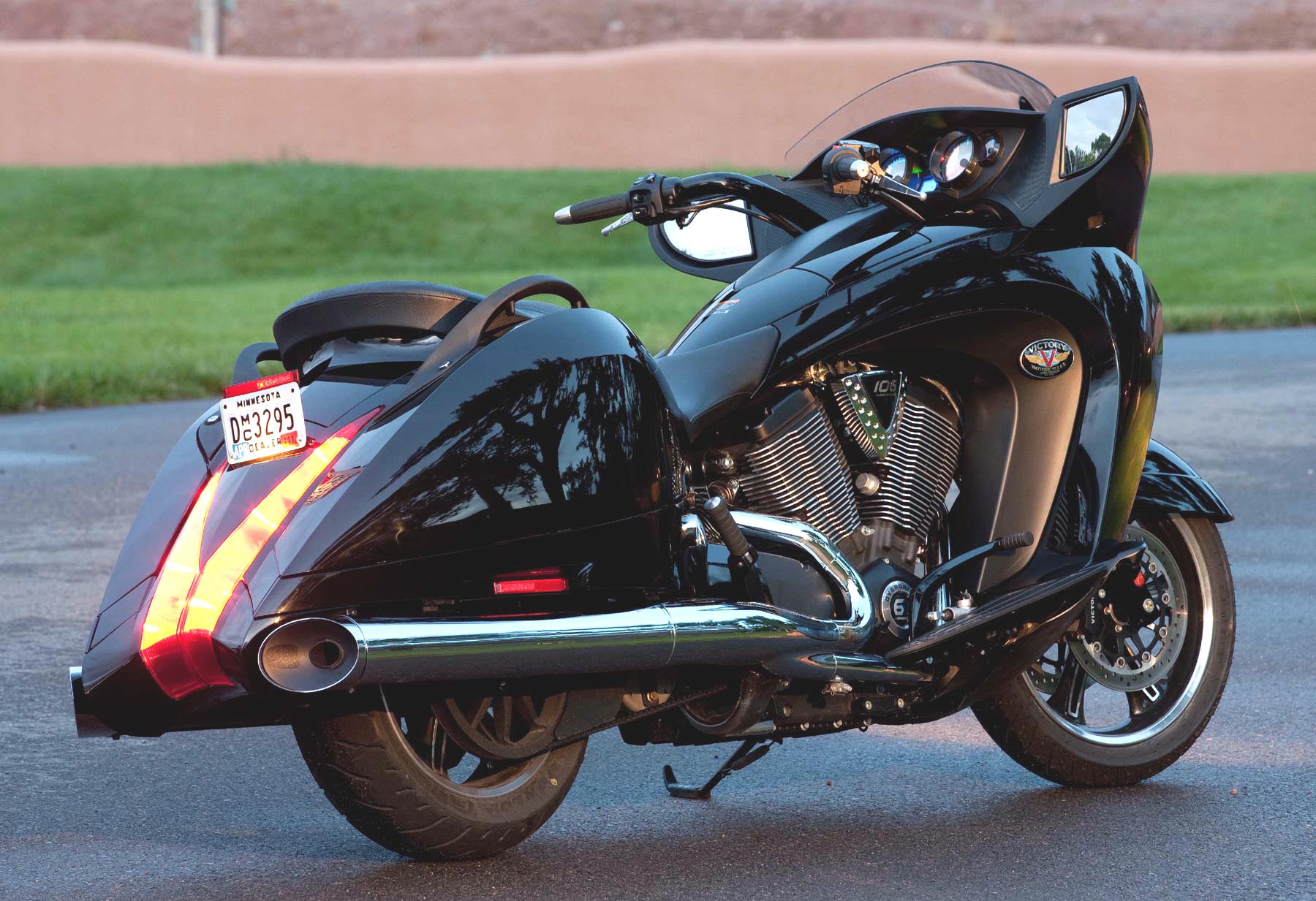 The seat is a low (24.5 inches), comfortable one-piece affair, with a stepped up passenger pillion and a strap grip for the passenger. Dimensionally, the Vision 8-ball has both a long wheelbase and overall length than many Harleys, yet it weighs in at less than the Harleys thanks to the use of composite materials in the bodywork.

My test Victory was the 2011 Vision 8-Ball model. The base sticker was set at $17,999. The 2011 Victory Vision 8-Ball displays a dramatically pleasing visual presence, with styling cues rivaling the appeal of a custom Harley, but in sinister black theme.

All the angles and contours flow harmoniously, with the 106 cubic-inch motor displayed in the frame as a jeweled focal point. The motor not only looks good, it also hauls one's bootie with gusto. If there were a downside at all, the pleasing stock exhaust note would be better with a little more of a thunderous roar.

The riding position is particularly comfortable and well-balanced. Vision 8-Ball is an extremely satisfying touring machine where everything works well from the handlebar and floorboard positioning to the well-padded seat. The suspension travel smoothes out rough road surfaces for more pleasant, long distance rides, and the new modified six-speed gearbox is definitely smoother and quieter. 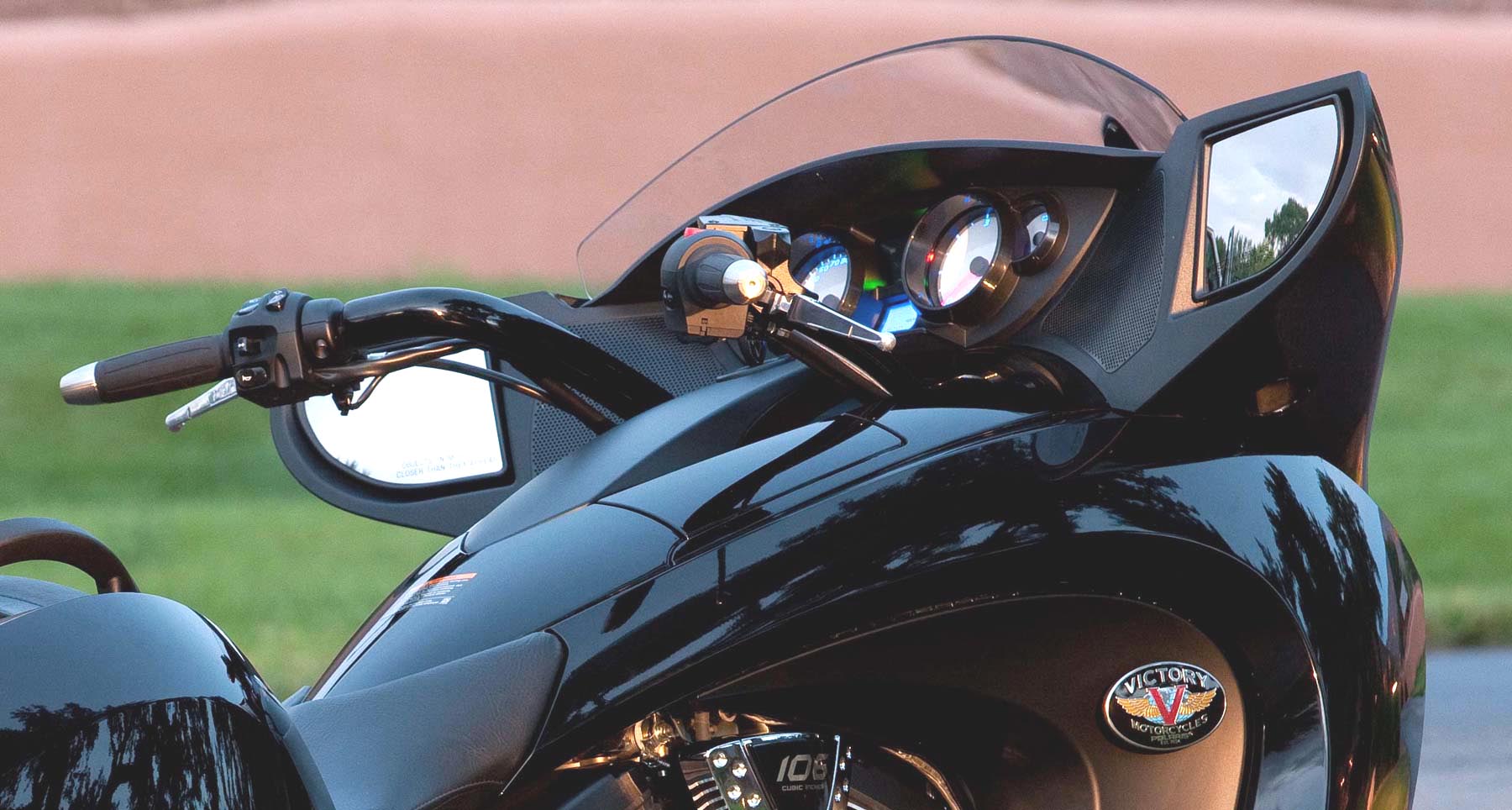 The positive Neutral finder is a nice touch, unless you actually don't want to find Neutral, which happened to me on more than one occasion. There's plenty of power on tap with a very broad torque range in case you don't want to do a lot of shifting of gears.

The national press launch, took riders from the Gateway Canyons Resort (about 60 miles out of Grand Junction, Colorado) to Mountain Village, above Telluride (about 100 miles) and back. The ride took us along a river, through towering red cliffs that served up a remarkably picturesque scenario.

On the return leg, the ride became less pleasant, rolling through thunder and lightning joined by a torrential and soaking downpour that failed to make for the most enjoyable riding conditions, but the bike soldiered on with stability, making the best of a negative scenario. The balance was superb as was acceleration and braking.

The company's tagline "Fuel It" refers to fueling one's passion for hitting the road on two wheels, and in the final analysis, Victory's new 2011 Vision 8-Ball provides a custom look right off the showroom floor in a lineup that now offers a wide selection of models that has something to satisfy nearly every Cruising and Touring rider. The New American motorcycle should continue to forge ahead in popularity.