BMW has long powered many of its automobiles with an inline six-cylinder engine, particularly roadsters, so it seemed only prudent that the smoothness provided by such an engine configuration would be a natural application for a luxury touring motorcycle, since both share open air motoring. 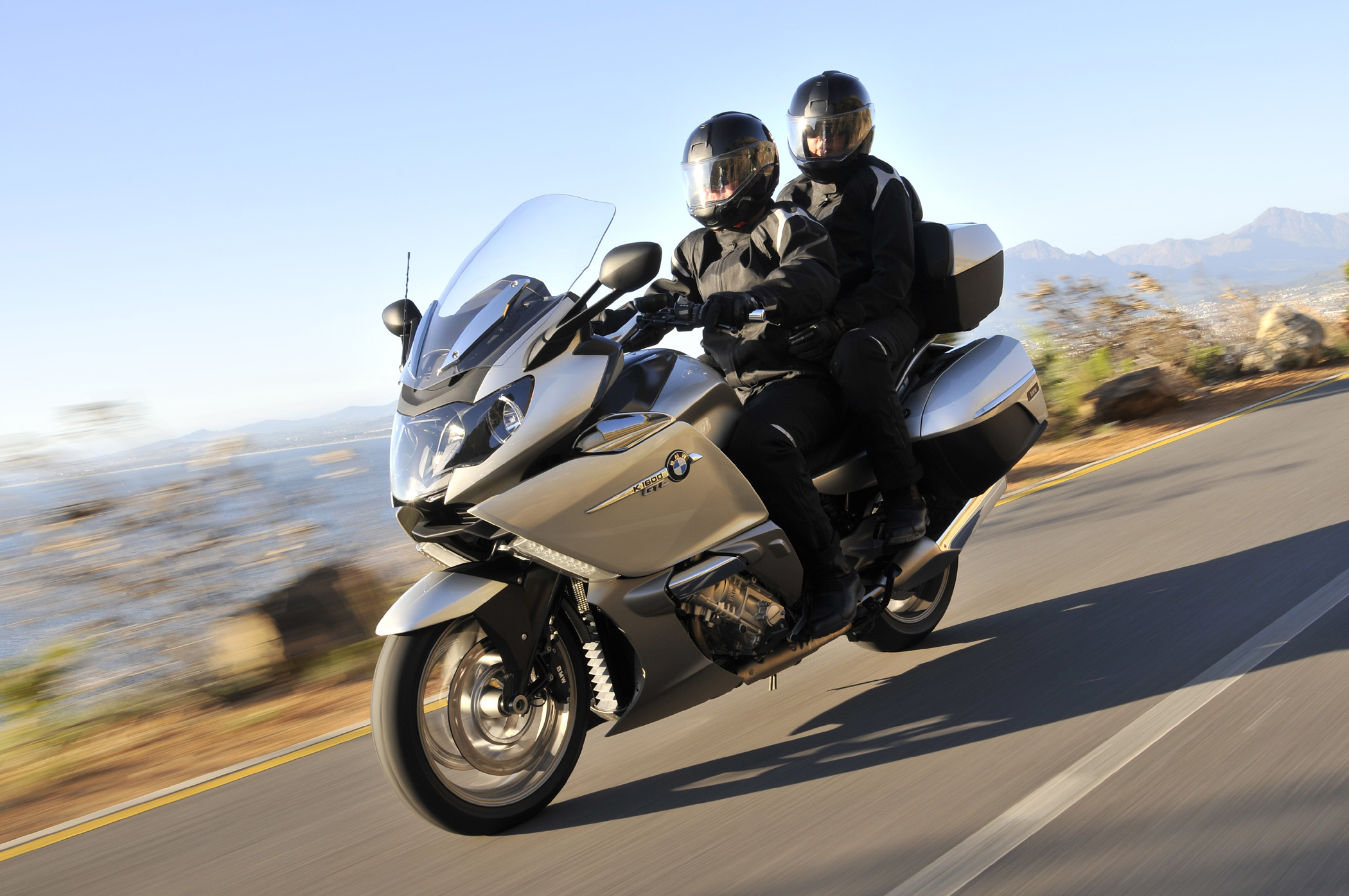 Manufacturer photo: The 2012 BMW K 1600 GTL has set a new benchmark for grand touring motorcycles by offering the world's most advanced technology available on two wheels

At first glance, the 2012 BMW K 1600 GTL is somewhat intimidating due primarily to its size and overwhelming technological content, but actually riding it sets aside any issues of intimidation. It comes with more features than many cars, and while it isn't inexpensive (base price is $23,200), this BMW bike delivers an impressive inventory of features and equipment for the money.

The K 1600 GTL's technology, performance capabilities and characteristics combined, are more than likely to set a new benchmark in the luxury touring motorcycle category. Available extras include a Premium Package that adds: Dynamic Traction Control; a full audio system including iPod connectivity; a central locking system for the saddlebags; anti-theft alarm, ESA II (Electronic Suspension Adjustment), which adjusts suspension settings. With all the extras, the bike's total as we tested it came to $25,845.

Riding the new 776-pound K 1600 GTL instantly bolsters one's confidence and sense of security, giving way to a feeling of superior riding skills on the road. It is incredibly smooth and precise in every aspect across the board, including acceleration, shifting, handling and braking. Despite its mass, this latest Bavarian tourer is truly dreamlike to ride with near perfect balance in virtually every riding scenario. It is exceptionally composed at speed, whether traveling in a straight line or when cornering. 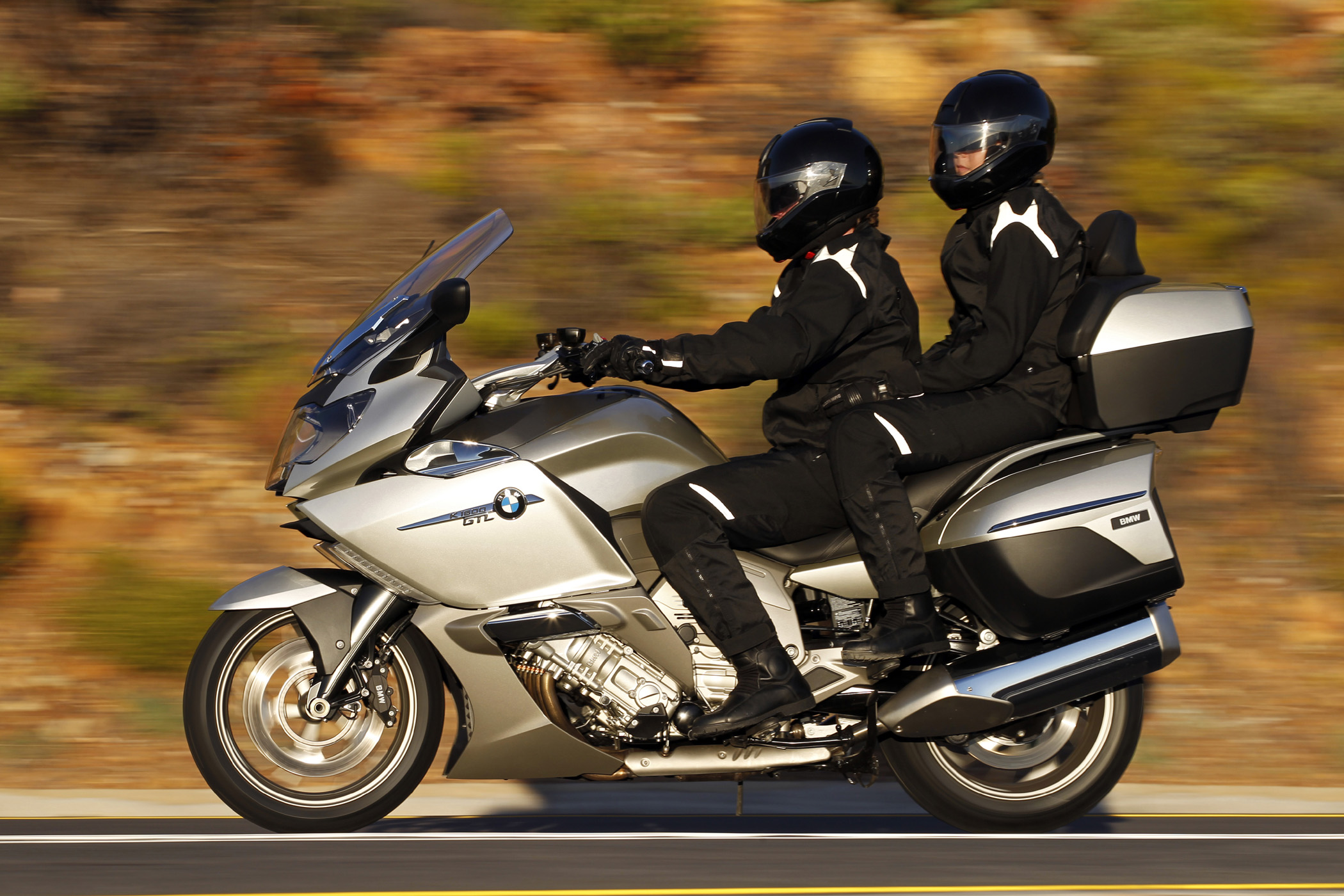 The power curve and torque delivery is incredibly linear, making it possible to accelerate from slow speeds (below 1,000 rpm) in sixth gear to bullet-train fast, without downshifting. Essentially, the bike is always at the ready whether riding solo or two-up with luggage that's fully packed with gear. The bike revs to a redline of 8,500 rpms -- not unusually, or impressively high, but the sound that emanates from the six individual exhaust outlets (three per side) borders on Indy car or Formula One audible notes. The bike actually seems happiest above 6,000 rpm.

The engine is the world's lightest and most compact six-cylinder motorcycle engine in serial production today, weighing in at 226 pounds (including the clutch, gearbox and alternator) and measuring less than 22 inches wide. It is comparable in size to existing four-cylinder powerplants. It is slightly undersquare in terms of stroke/bore, with a ratio of 67.5 to 72 millimeters (0.938) with a relatively long stroke and very small cylinder center distance spacing of 77 millimeters. The distance between the cylinder sleeves is a mere 5 millimeters.

The GTL version K-bike delivers a more compliant and smoother ride quality than the GT model, providing a more upright riding position and a lower and more forward placement of the broader surfaced foot pegs. The aluminum handlebars are more swept back and the stock seat height measures 29.8 inches. An optional 1.2-inch taller seat is available at purchase for no additional cost, which can be raised even more by inverting the frame mounts.

The 2012 BMW K 1600 GTL is nearly the perfect motorcycle for luxurious, long range cruising. It tends to steer with a much lighter feel than many sportbikes at cruising speeds, but it can also be pushed hard with more than satisfactory results. Its overall load capacity may not seem overwhelming at 438 pounds, which is less than Kawasaki's Concours 14, but it's more than that of Honda's Gold Wing. Shifting gears is smooth and easy, either up or down.

In terms of potential improvements for the K 1600 GTL, a reverse gear might prove to be a nice addition, along with wider spacing in the passenger hand grips, which would allow for a more substantial grasp, since the wide seat and side bolsters of the backrest tend to interfere with the grip's ergonomics. 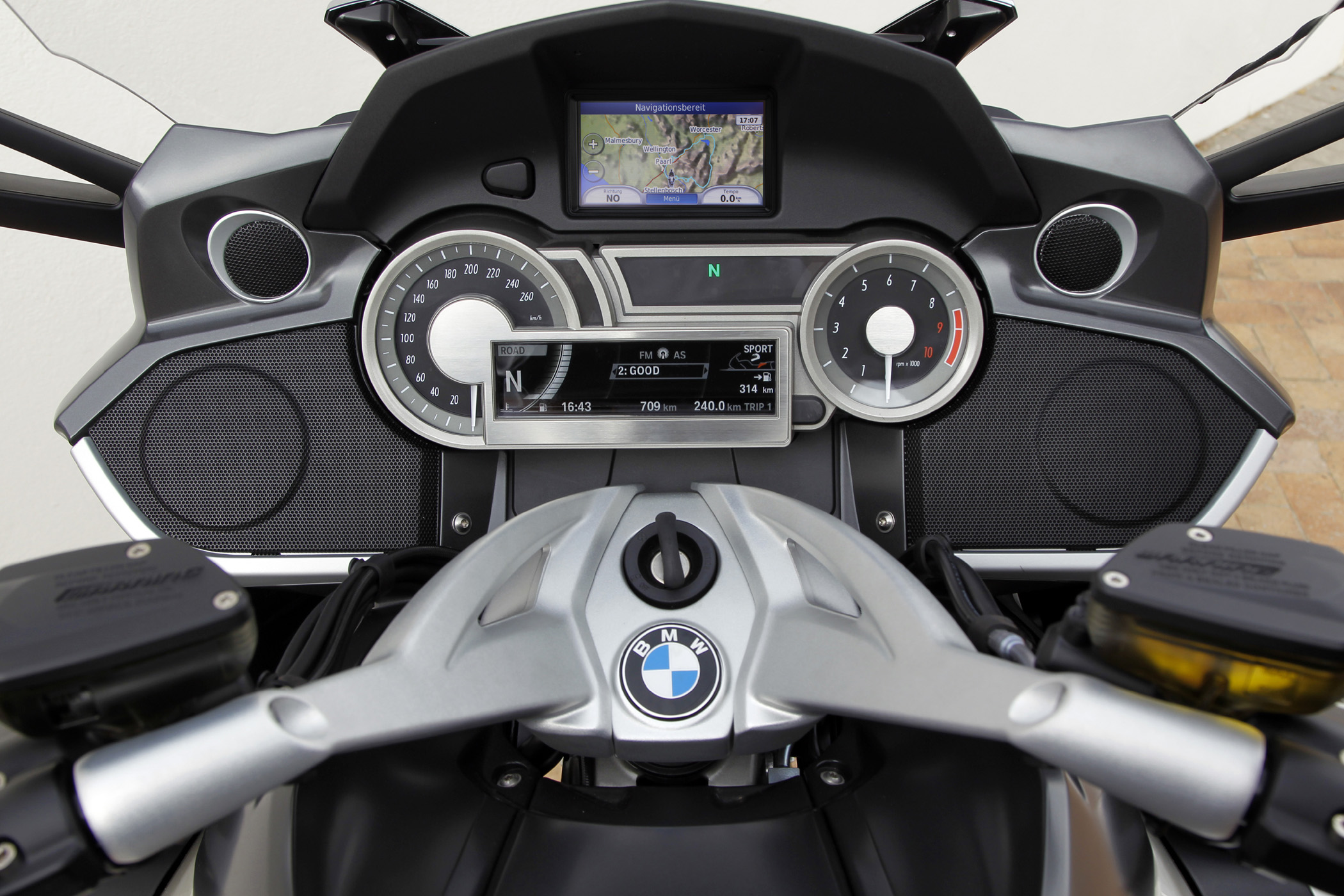 This newest luxury tourer and technology showcase from BMW is a work of art, as well as ranking as a phenomenal motorcycle that may be properly considered to be both a luxury tourer and sport tourer in one. Will it appeal to and pull loyalists from other brands in the same category? Only time will tell, but we definitely think so.