Indian Motorcycles debuts an iconic Indian Scout for 2015, marking the return of the legendary small American cruiser which first appeared in 1920. With the addition of the Scout, Indian now offers a stable of six motorcycles. 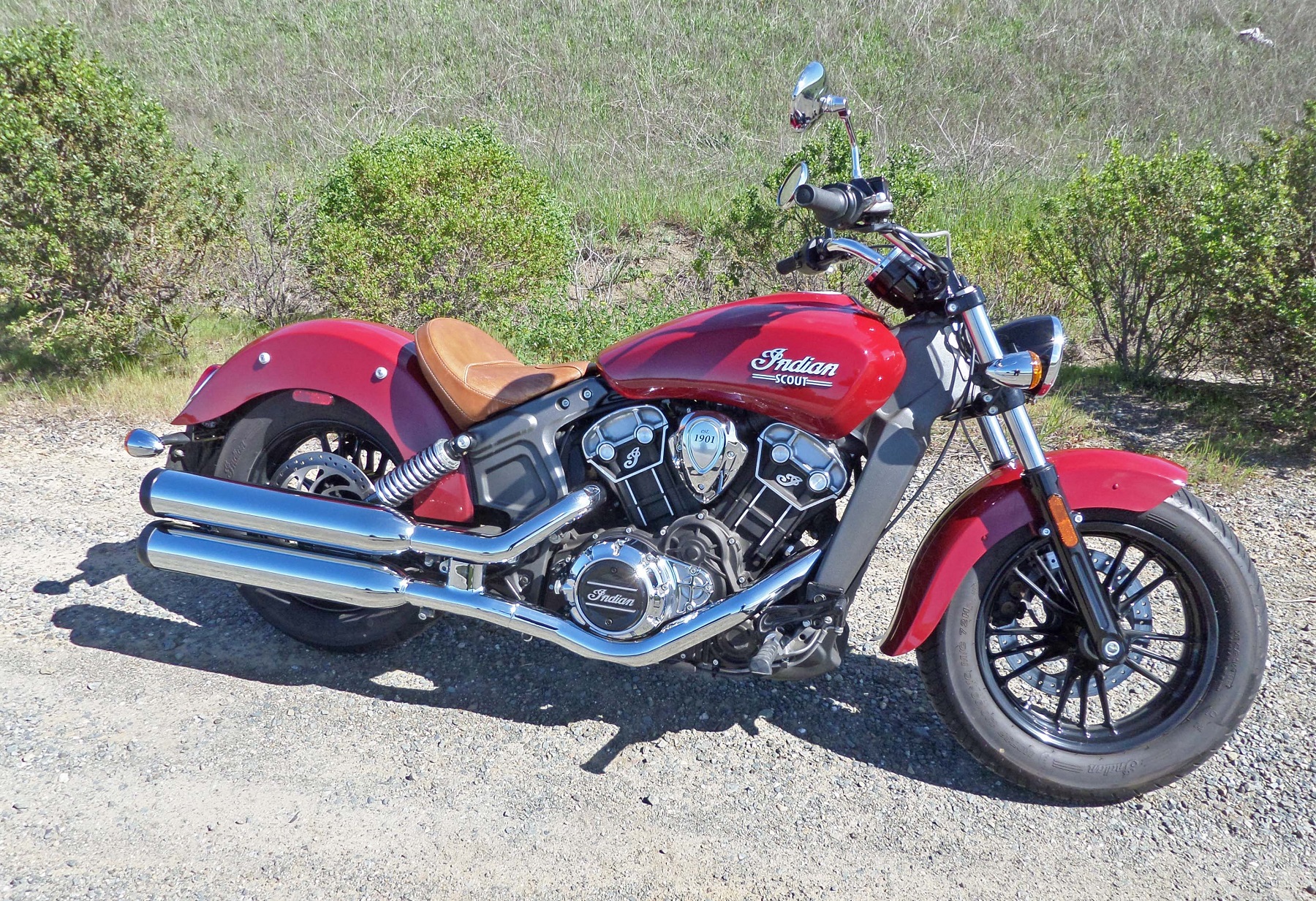 Visually, the Indian Scout serves up a retro flavor, but with a more modern flair. The updated chassis reflects how the original 1920 Scout might have evolved over the years to match today's standards. In the past, there were several models or trim levels of the Scout; this latest iteration Scout is a singular model.

The new 2015 Indian Scout is liquid-cooled rather than air-cooled, which is a highly visible non-conventional departure from its predecessors, while the suspension is basically conventional fore and aft. The base Indian Scout starts at $10,999.

From a personal point of view, the base model Indian Scout best portrays the currently popular retro small cruiser trend -- it's also the most affordable. A fully loaded Scout adds considerably to the bottom line, but will still run just under $15,000.

Motive force for the Scout comes from a 1123cc (or 69-cubic-inch), first-ever liquid-cooled Indian V-Twin with closed-loop electronic fuel injection, a 60mm bore, and split dual right-side exhaust with a crossover. Horsepower is rated at 100, with 72.2 lb.-ft. of torque at 5,900 rpm. A six-speed sequential manual transmission gears the engine's output to the rear wheel through a gear-drive wet-clutch Primary Drive to the final left-side belt drive. 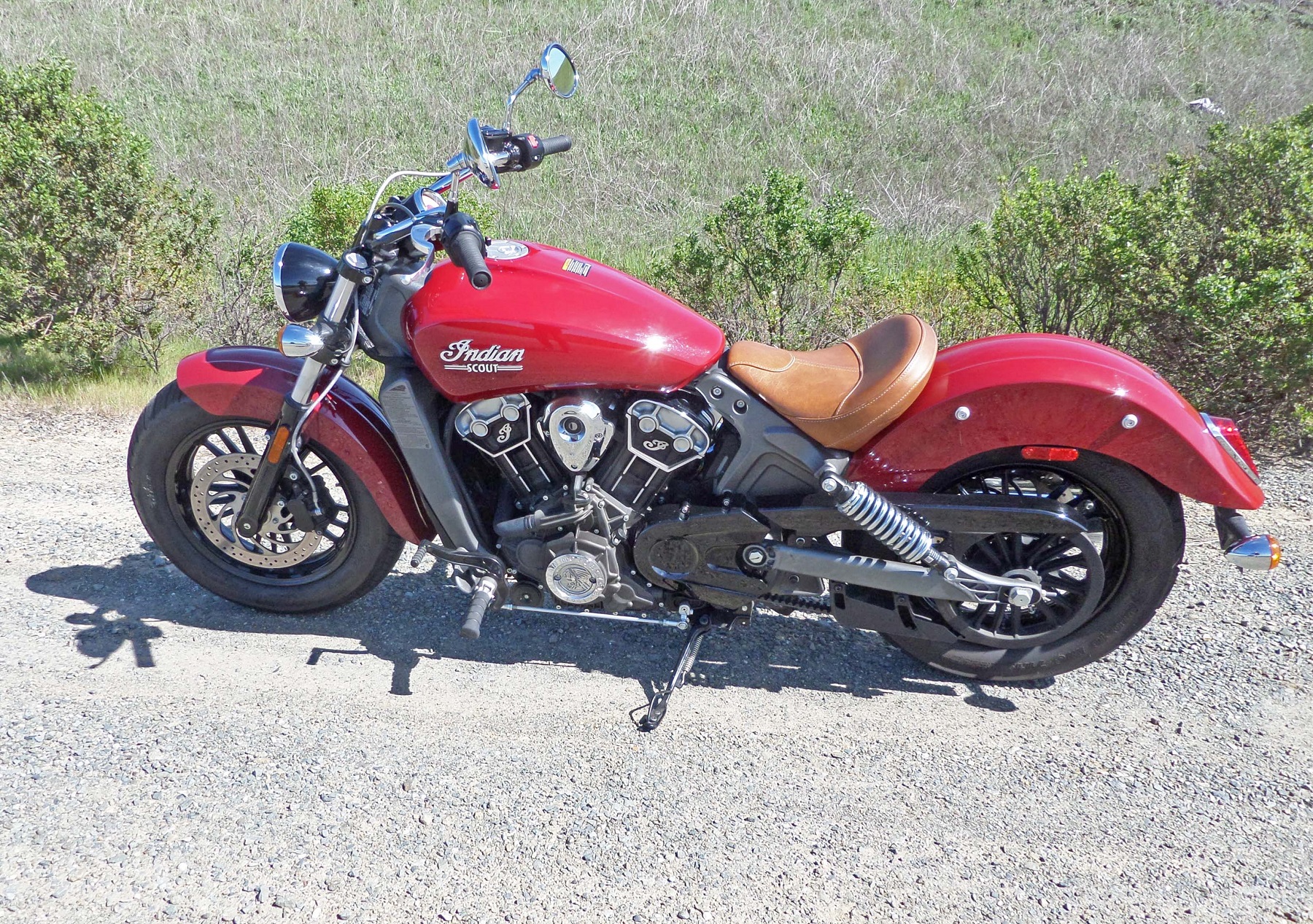 Up front, the suspension setup consists of 41mm telescopic forks with 4.7 inches of travel; in the rear, dual adjustable coil-over shock absorbers with 3.0 inches of travel are set at an exaggerated rake, paying homage to the 1920 Scout's hardtail look.

My 2015 Indian Scout wore an Indian Red finish on its bodywork, which featured hard edge lines on the fuel tank and front and rear fenders. Other colors include black, silver and flat black. The solo "old school" seat was done in durable, weather-resistant Desert Tan leather. The final sticker totaled out at $13,249. Dealer handling and prep may vary.

When viewing the Indian Scout for the first time in person, it appears relatively small. It sits low and displays a rather austere retro image. It wears no faux cooling fins on the engine, but instead has structural ribbing that matches other aluminum-toned accents.

The new Scout is designed to be a solo rider, drawing from its early heritage. Foot controls are set forward and the handlebars are well positioned and reach back to the rider, all making for a really comfortable riding position. The seat is small but surprisingly comfortable with its 25.3-inch height. An optional windshield is available, and an optional passenger pillion and pegs are also available, as are saddlebags, but why spoil the look? Granted: added comfort, convenience, and functionality may trump appearance and may not be a bad thing. Optional chrome crash bars, for instance, would provide relief for tall riders on long rides, but would tend to elevate the "bling" level, which doesn't fit this bike for my taste.

Extended-reach accessories can help riders better fit the bike thanks to a seat that moves the rider back an inch, foot control mounts that position feet forward an inch, as well as handlebars that move the hands forward an inch. These accessories are part of a dealership display, and make it easy to tailor the bike for the right fit.

The Scout is exceptionally well balanced with its low center of gravity, which allows for easy, fluid handling at all speeds, and the lean angle is enough to bolster confidence in high-speed cornering. All in all, the 2015 Indian Scout is a lot of cool bike for the money.