The Fiat 500 has been absent from the North American marketplace for more than 25 years. It likely disappeared due to dependability issues and the premise that FIAT was an acronym for "Fix It Again Tony."

This North American version of the Fiat is based on the globally popular Fiat 500, first launched in 2007, with over half a million sold in more than 80 countries around the world. It was named the 2008 European Car of the Year, while garnering 60 other international awards.

With our country's getting-back-to-basics movement, the new iteration of the 2012 FIAT 500 serves to fulfill the current minimalist attitude, while providing state-of-the-art, eco-friendly technology, packaged in an appealing and stylish vehicle.

Overhangs are short and the bodyside consists of several superimposed layers, topped by a shell-like roof. Up front, the signature "whiskers and logo" face incorporates new projector headlamps and lower park lamps. The front fascia tapers outward toward the pronounced wheel arches, displaying a wide, road-holding stance. Wheel arches are flared and the body-side A-line slopes from the clean clamshell hood to fender cut. 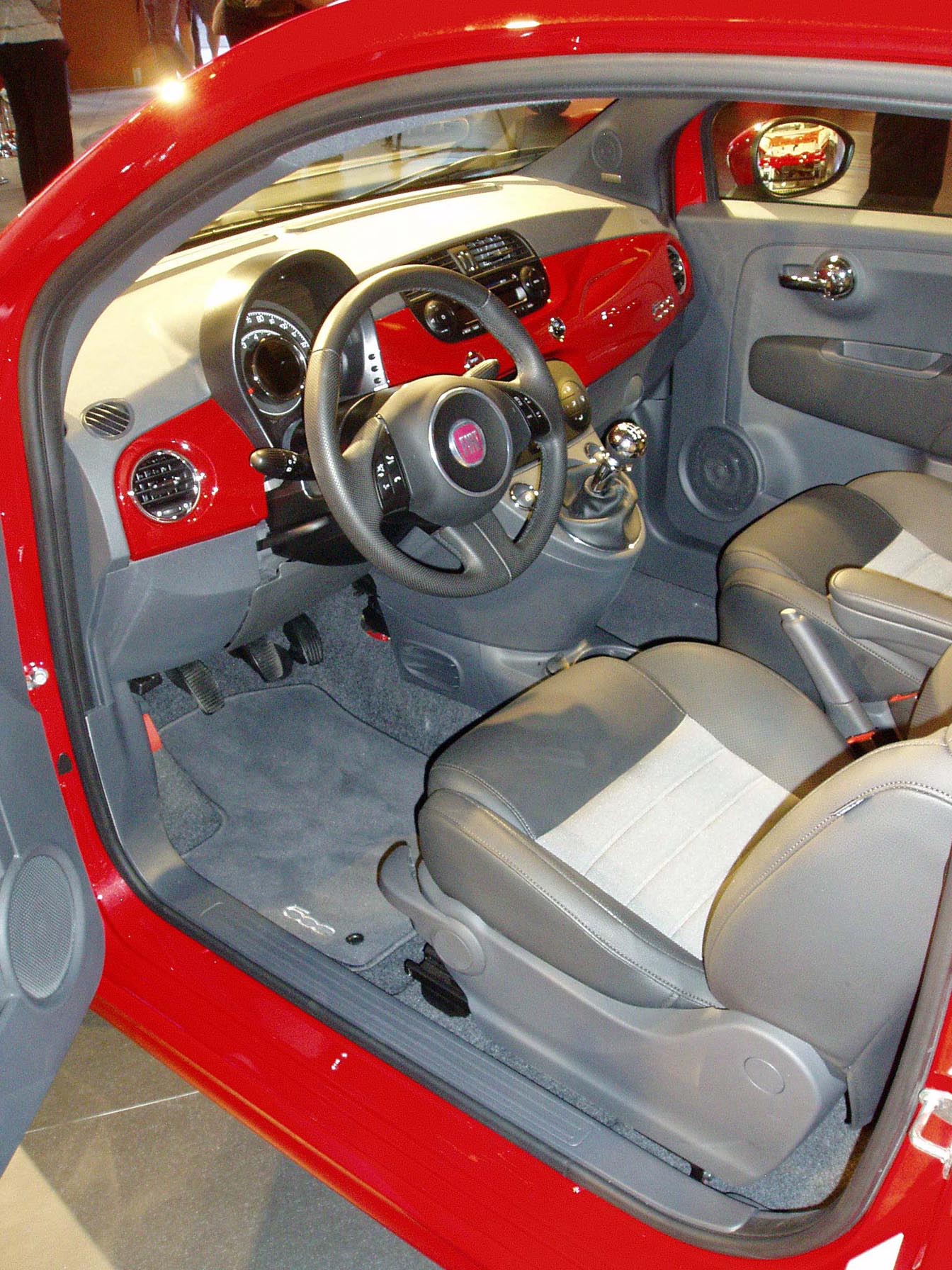 The interior styling and design cues are as simple and appealing as those of the exterior. Controls are logically placed for easy and intuitive use. The gearshift is positioned conveniently in the center stack. Features such as the concentric instrument cluster-containing speedometer, tachometer and trip computer were inspired by the original 500.

The 2012 Fiat 500 is available in three trims: a well equipped Pop model; the appropriately named Sport version; and upscale Lounge model. There are 14 exterior finishes and 14 interior treatments to choose from across the lineup.

The Fiat 500 is powered by a 1.4-liter, 16-valve MultiAir inline 4-cylinder engine. The innovative new engine delivers 101 horsepower at 6,500 rpm along with 98 lb.-ft. of torque at 4,000 rpm. Weighing a mere 250 pounds, the engine resides transversely up front, with either a five-speed manual gearbox, or 6-speed automatic transmission with a manual model, metering the driving force to the front wheels.

Driving the 2012 Fiat 500 is a hoot. The models tested were all pre-production units and tended to vary in fit, finish and performance. Issues such as clutch engagement and shift linkage were different in different vehicles -- nothing dramatically negative, just different, which took some getting used to. All Fiat models feature a dash-mounted sport button that improves the throttle mapping and engine response. Normal operation is an Eco-mode, which is not as responsive, nor is it as much fun. I engaged the Sport mode and thoroughly enjoyed the spirited characteristics.

Acceleration is surprising with only 101 horses available, but then, the car only weighs 2,363 pounds (add 71 pounds for the automatic transmission). The ride quality in the Sport model with its larger, 16-inch wheels and tires was noticeably firmer than the other two models with their 15-inch donuts.

The 2012 Fiat 500 is great fun, is really cute (normally I avoid this description, but it fits) and attracts lots of attention. It is reasonably priced, allowing buyers to spend only what they want, and it is eco-friendly as well.