The entire stable of CR-V models from Honda delivers SUV versatility and functionality with a stylish and refined presence. The 2011 Honda CR-V represents a desirable vehicle lineup in its base form at a reasonable and affordable price. 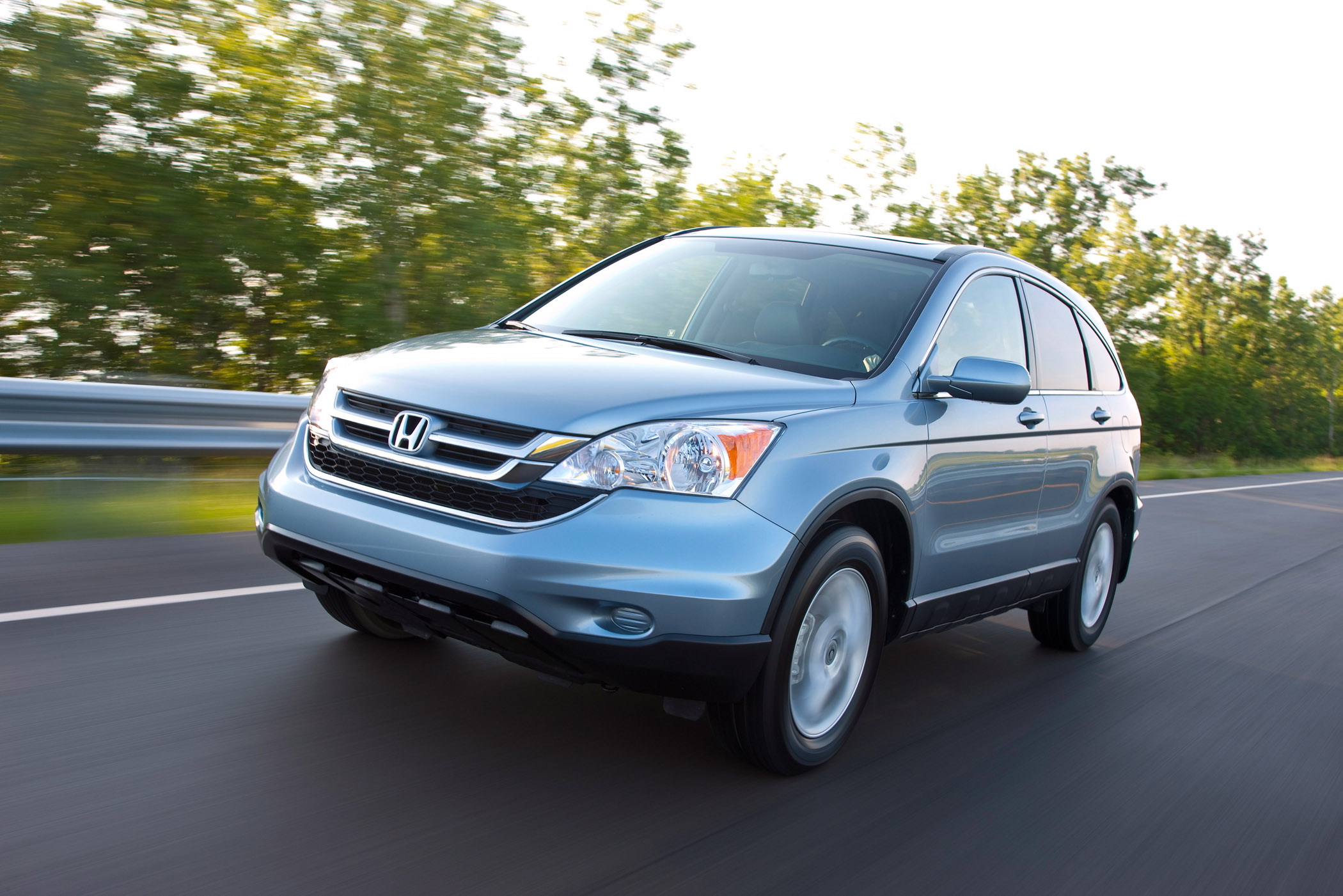 Manufacturer photo: The 2011 Honda CR-V is a versatile and accommodating crossover SUV package with space for up to five passengers and a versatile cargo area for utility

The motor is positioned sideways up front and drives either the front wheels or all four wheels via Honda's Real Time 4-Wheel Drive system. Measures of power are metered through a five-speed automatic transmission with an active torque converter. EPA-estimated fuel-economy ratings are 21/28 miles per gallon city/highway for 2WD models and 21/27 mpg for models equipped with 4WD.

Visually, the CR-V displays a dynamic forward cabin, a two-tiered grille and a distinctive side profile that expresses this Honda's emphasis on upscale style and design. My test 2011 Honda CR-V was the EX-L trim in the Real Time 4-Wheel Drive set up with the navigation system. The exterior was sprayed Tango Red Pearl metallic, while the interior was executed in charcoal and Gray tones. 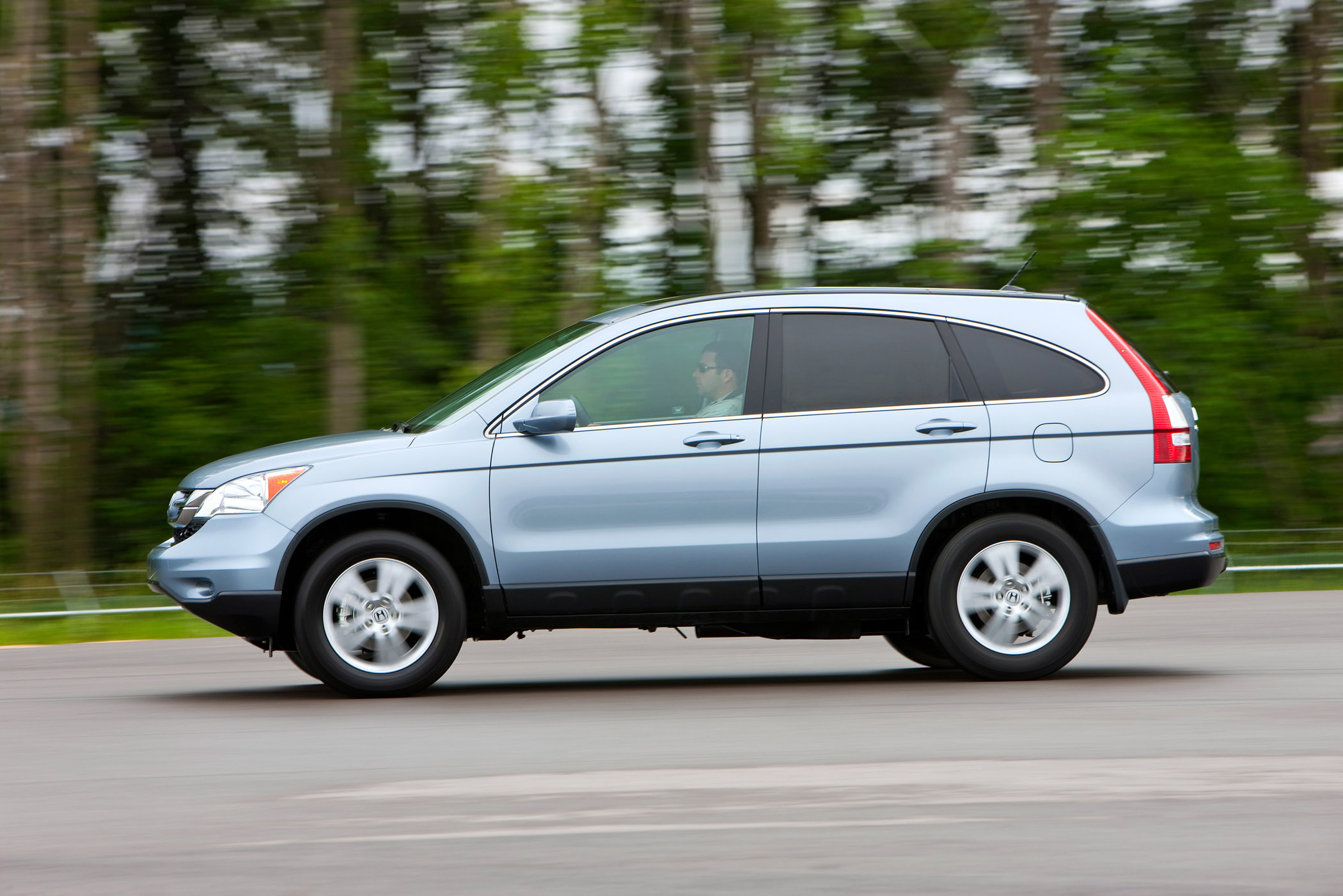 The 2.4-liter i-VTEC four-cylinder delivers more than enough power and acceleration to fulfill its mission. The ride quality is more like that of a sedan than an SUV, and in terms of its handling prowess the CR-V features a tight turning circle of 37.8 feet. This kind of sedan-like maneuverability in a 4WD configuration is not usually the case in the class. And, the steering provides positive feedback with good on-center feel for nimble response. The seating accommodations are really comfortable and supportive and switchgear is logically placed for optimum user friendliness.

The CR-V appears to be compact on the outside while it is actually quite accommodating on the inside, with the interior providing a maximum passenger volume of 103.8 cu-ft., plus an accommodating cargo volume of 35.7 cu-ft. behind the rear seats.

The five-passenger interior's focus is on functionality and style. The front-row storage areas are designed to accommodate items such as a handbag or briefcase between the seats. For enhanced comfort, there are driver's and front passenger's center-folding armrests, and a center console replaces the retractable center tray table on the CR-V EX-L with navigation.

Maximum possible cargo volume measures 72.9 cu-ft. with approximate floor dimensions of 51 inches long by 39 inches wide (at wheel wells). Potential storage behind the rear seat is enhanced by a dual-deck cargo shelf that can strategically facilitate items like a folded baby stroller on the lower level and grocery bags on the upper level.

The EX-L trim with Navigation is at the top of a very successful model line, while even the base model comes with an impressive inventory of equipment and features as standard issue. The 2011 CR-V is a solid choice for consumers looking for practicality in an attractive package that also delivers reasonable fuel economy.