The 2012 Cayman R Coupe represents a radical departure from other Cayman models with its fixed rear wing, special 19-inch light alloy wheels, carbon fiber sport bucket seats, lack of a radio (it's optionally added), air conditioning and interior door handles (a woven cloth strap is used to open the doors from the inside).

The Cayman R cranks out more 330 horsepower at 7,400 rpm with a torque rating of 273 lb.-ft. at 4,750 rpm. The engine is a 3.4-liter, 24-valve, horizontally-opposed 6-cylinder with electronic fuel injection, VarioCam Plus and high performance exhaust manifold.

Cayman R comes with a six-speed manual gearbox with dual mass flywheel as standard fare, while a DPK dual clutch automatic is optionally available. The centered twin exhaust outlets are finished in black and emit a truly exotic note, which may be further enhanced by Porsche's optional Sport Exhaust system (highly recommended).

The concept behind the Cayman is really quite simple: maximize performance through minimized a power-to-weight ratio. The Cayman R weighs 2,855 pounds, is 0.79 inches lower than the other Cayman models and rides on a retuned sport suspension. 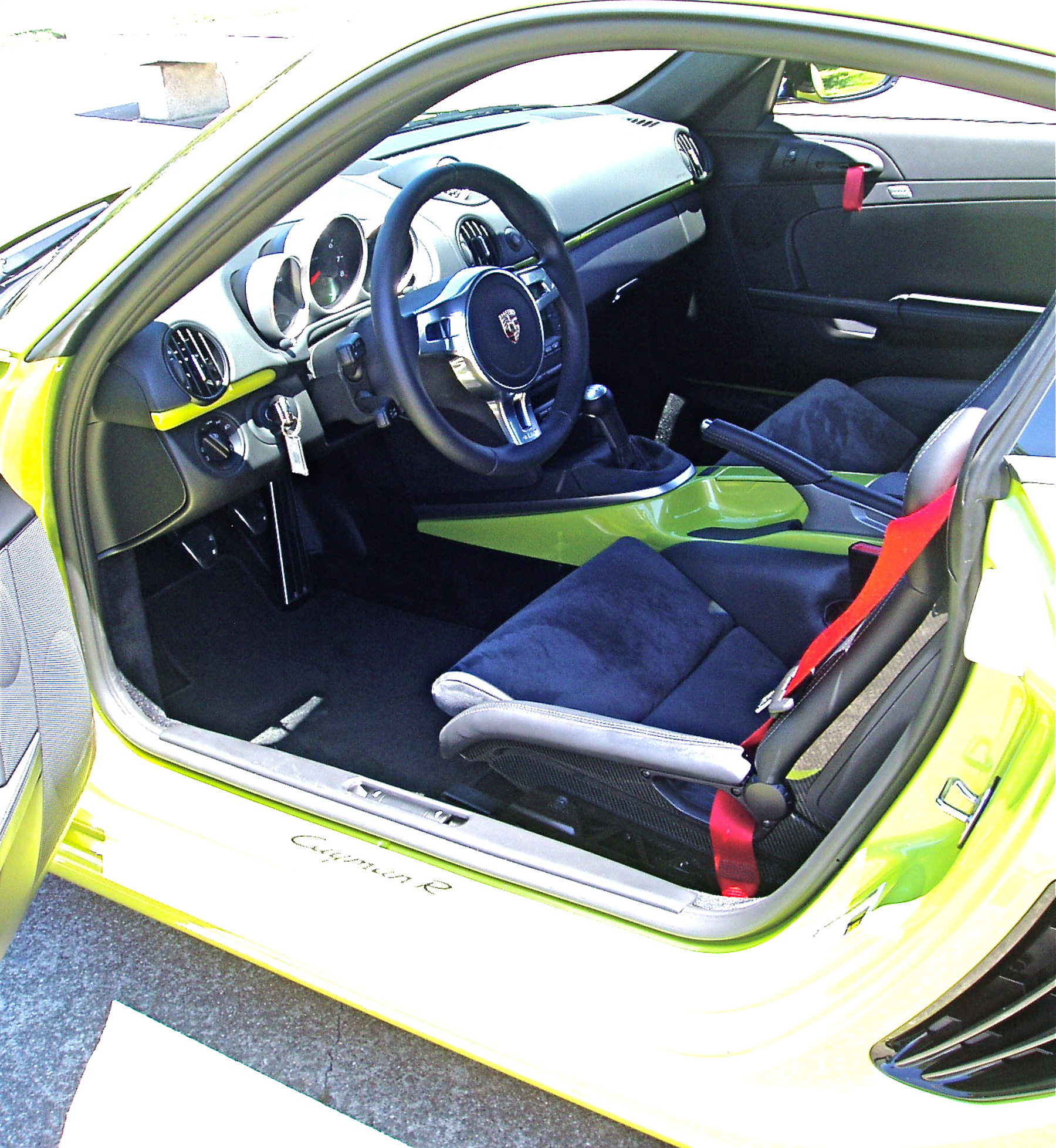 My test 2012 Porsche Cayman R Coupe came with the standard Peridot metallic exterior finish (other colors are available) and a black interior with Alcantara seating surfaces. It was also fitted with the six-speed manual transmission. The base price was set at $66,300. Options included: ceramic composite brakes; sound package plus with storage; sport chrono package; black-painted alloy wheels; sports exhaust system and destination charge, which kicked the final amount to $81,685.

The 2012 Porsche Cayman R Coupe delivers the same non-conformist, non-conventional attitude as the Boxster Spyder. Individualism is key here, coupled with an unbridled level of performance. The tilt/telescopic three-spoke steering wheel aids in achieving a comfortable driving position -- that is, after actually getting into the car, which is not easy if you're much over 6 feet tall, given the rigid seat edges and exceptionally low entry level.

Once settled in however, the seats are highly supportive and pretty comfortable. Turn the ignition key, fire up the engine and press both the Sport and Sport Exhaust buttons to produce what may well be the ultimate driving experience. The thunderous exhaust tone and added throttle response are totally exhilarating.

The acceleration rate is most gratifying when pushing the pedal to the metal. The Cayman R is also quite pleasing in more docile scenarios, such as boulevard cruising. Around town, there seemed to be no need for anything above third gear, and actually, first and second gears worked very well -- not the best for optimum fuel economy. EPA estimates are 19 miles per gallon city and 27 mpg highway.

Handling is nimble and responsive with positive steering feel and the ride quality is surprisingly comfortable, despite the extra tuning in the sport suspension. It's exceptionally firm and stable, yet not in the least harsh. The Cayman R with the manual gearbox scoots from 0-60 mph in 4.7 seconds. Bringing the Cayman R to a halt is equally impressive with the Ceramic composite brakes. 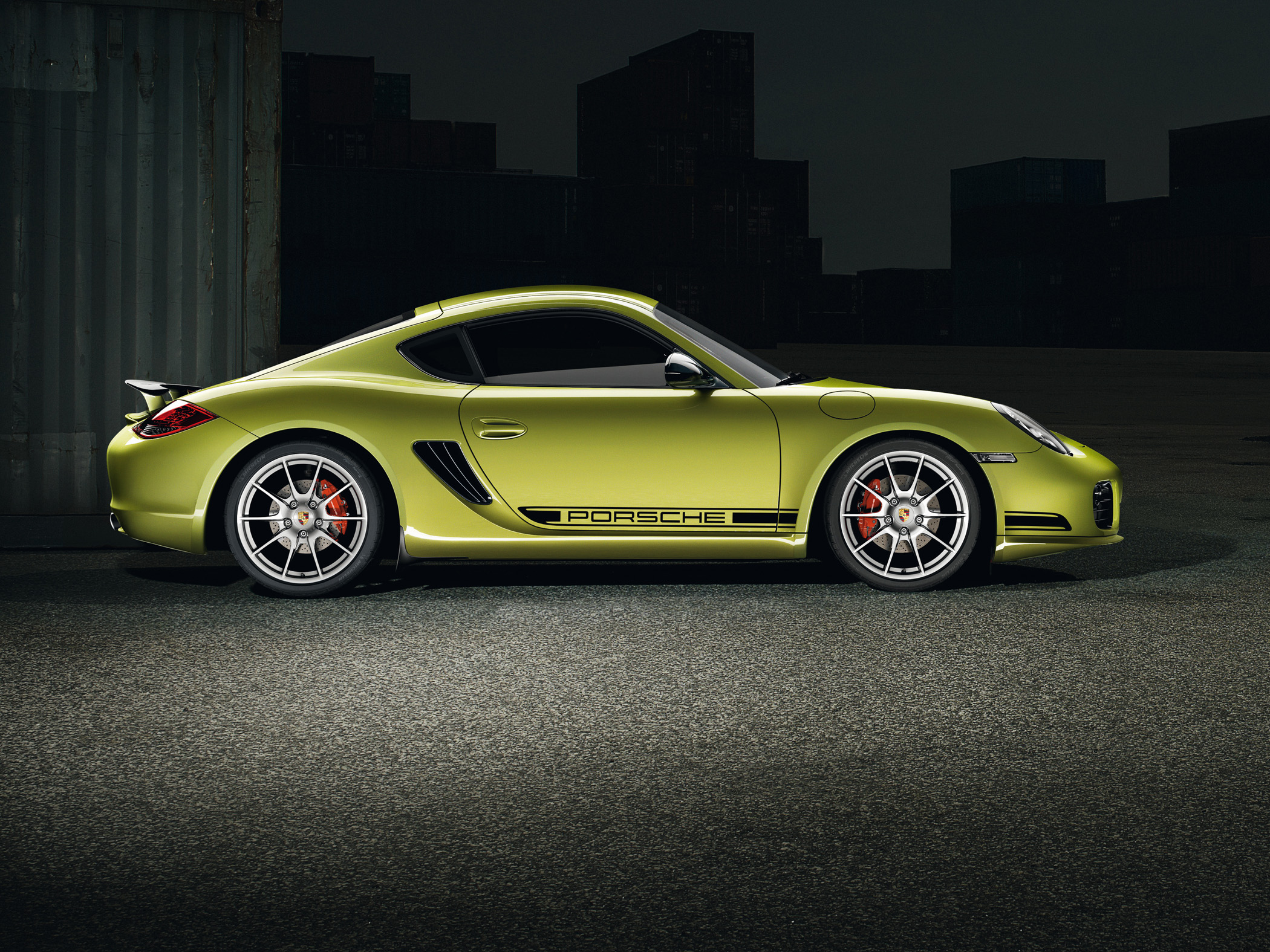 The bottom line is the Cayman R is a stellar two-seat coupe with phenomenal capability. The only quibble I can think of is that there's no open-air Cayman model -- and if it were a roadster, it would be the ideal sports car.