Called the "gateway" to the Mercedes line of Sport Utility Vehicles, the entry-level GLK350 is the smallest SUV in the Mercedes-Benz stable. For 2013 the restyled GLK boasts over 1,000 new parts. 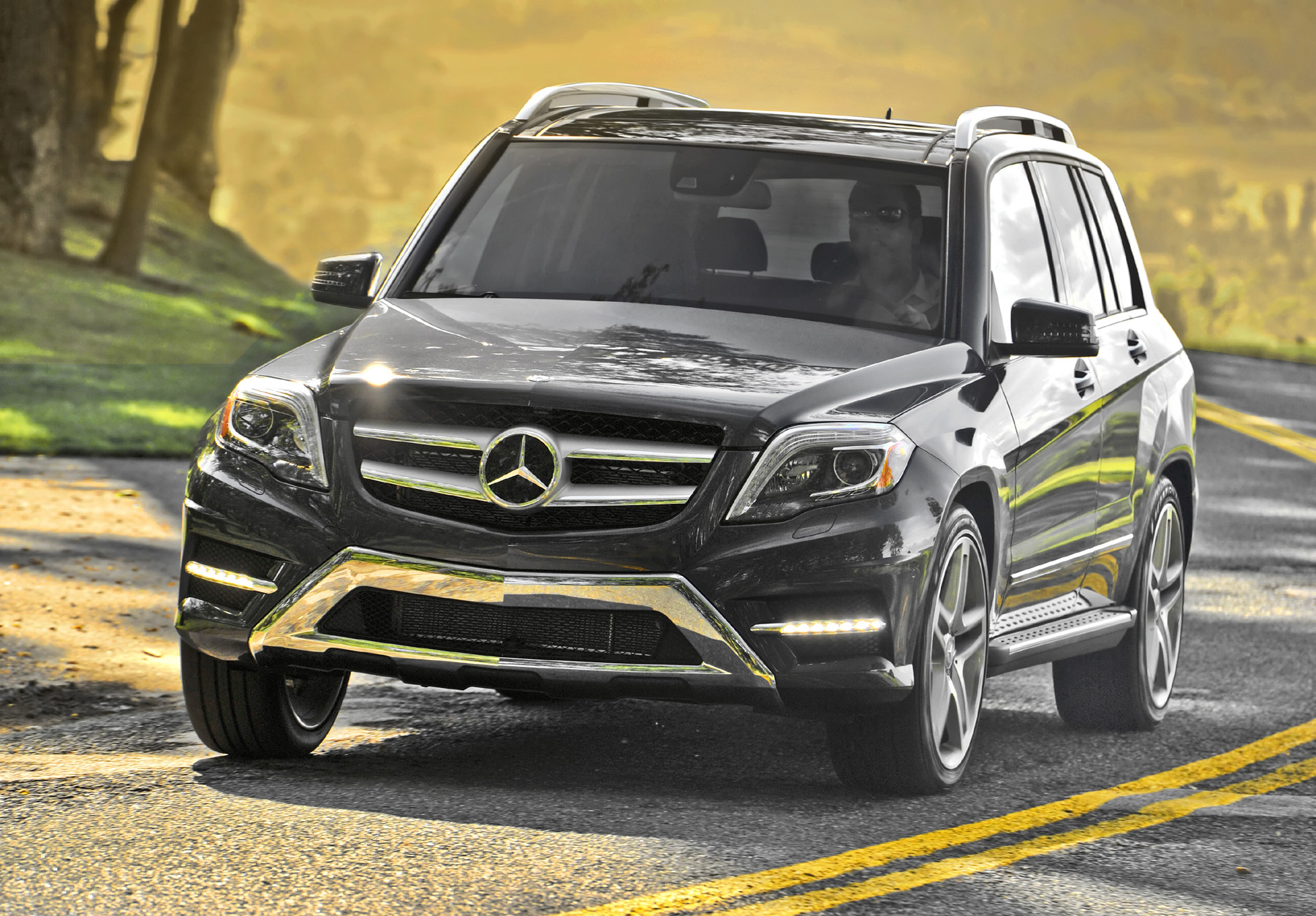 Manufacturer photo: The Mercedes-Benz GLK is redesigned for the 2013 model year, with bolder exterior styling, a dramatically restyled interior, and crisp driving dynamics

The Mercedes DNA on the new 2013 GLK350 is readily apparent up front with the iconic trapezoidal grille wearing a prominent circle-star logo in the center of the horizontal two-bar grille. The windshield is more upright, with less rake and the roofline slopes to the rear, as a strong character line rises toward the beltline. An integrated spoiler trails off the edge of the roof and dual rectangular chrome exhaust tips float in a bright rear diffuser.

The interior is equally impressive with a new look and comfortable seating that's restyled for five adults (as long as the three passengers in the rear are on the diminutive side). Both front seats feature eight-way power adjustments. The three-spoke leather-wrapped steering wheel contains multi-function switches facing sporty, easy-to-read analog gauges nestled beneath a curved, hooded pod.

There is a 5-inch color display for navigation and all basic vehicle functions positioned at the top of the center stack, which contains switchgear for redundant functionality. A center console provides split storage access and the gear selector has been relocated to the right side of the steering column with the cruise control stalk is positioned further from the directional signal stalk. The leather interior appointments are accented by brushed aluminum finish trim elements.

A revised V-6 engine is introduced on the 2013 GLK350: a 3.5-liter 24-valve V-6 with electronic Direct Fuel Injection and magnesium two-stage resonance intake manifold that now delivers 302 horsepower instead of the previous 268. 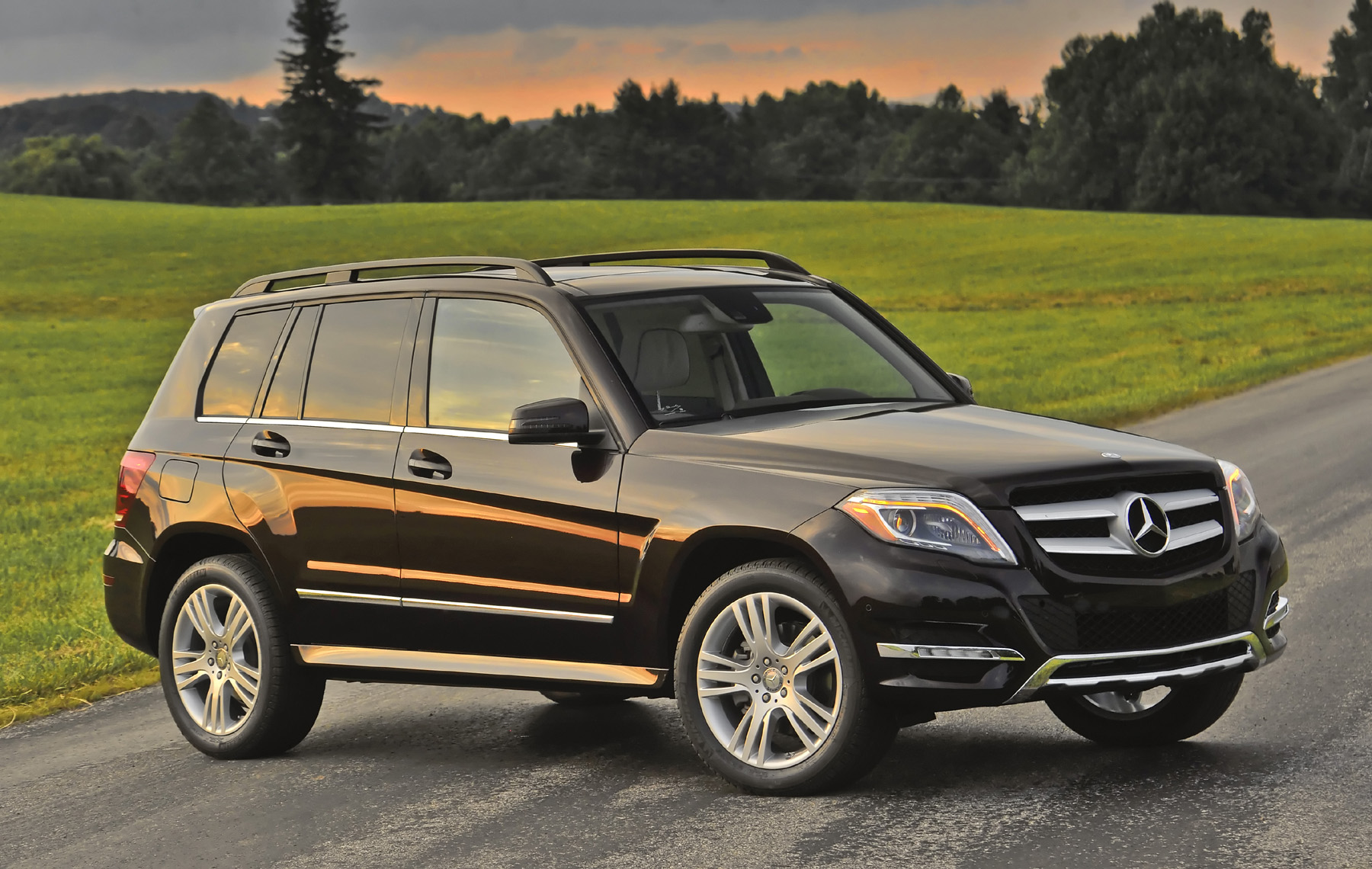 The transmission is an enhanced seven-speed automatic with Touch Shift manual shift control. The engine resides up front in a longitudinal orientation and routes power through the transmission to either a RWD setup or the optional 4MATIC full-time AWD system. Towing capacity is 3,500 pounds.

My test 2013 GLK350 was a 4MATIC version with an exterior finished in Steel Grey metallic and the interior in Black MB-Tex with aluminum trim accents. The GLK350 4MATIC is not only the right size for many families, it also comes in a most attractive package that is certainly more affordable than other luxury SUVs in the Mercedes-Benz family. Pricing starts at $37,090 for a rear-wheel drive model and $39,090 for the 4MATIC all-wheel drive system version.

The 3.5-liter V-6 provides a satisfying level of performance -- acceleration is healthy, shifting is smooth, and handling characteristics border on sporty, with a positive feedback. The ride quality is on a par with many luxury sedans. The GLK350 is capable of traveling off the beaten path, though it is not a serious off-road machine.

It is also one of the most efficient SUVs in the Mercedes lineup, delivering 16 miles per gallon city and 23 mpg on the highway. Less expensive SUVs, while they may deliver higher mileage ratings, fail to deliver the class and equipment inventory of the new GLK.

The only issue that I noted is the relocation of the shift lever to the right side of the column where you would normally find the wiper controls, which prompted several of my test drive companions to inadvertently shift into Neutral while underway when intending to activate the windshield wipers. Not really an issue when living with the GLK every day.