Two, Six, Four-Zero. If Hyundai were playing the numbers, then it would come up a winner. The all-new 2013 Elantra Coupe should win over buyers with its sleek two-door style, efficient six-speed gearbox and 40 miles per gallon highway fuel economy. 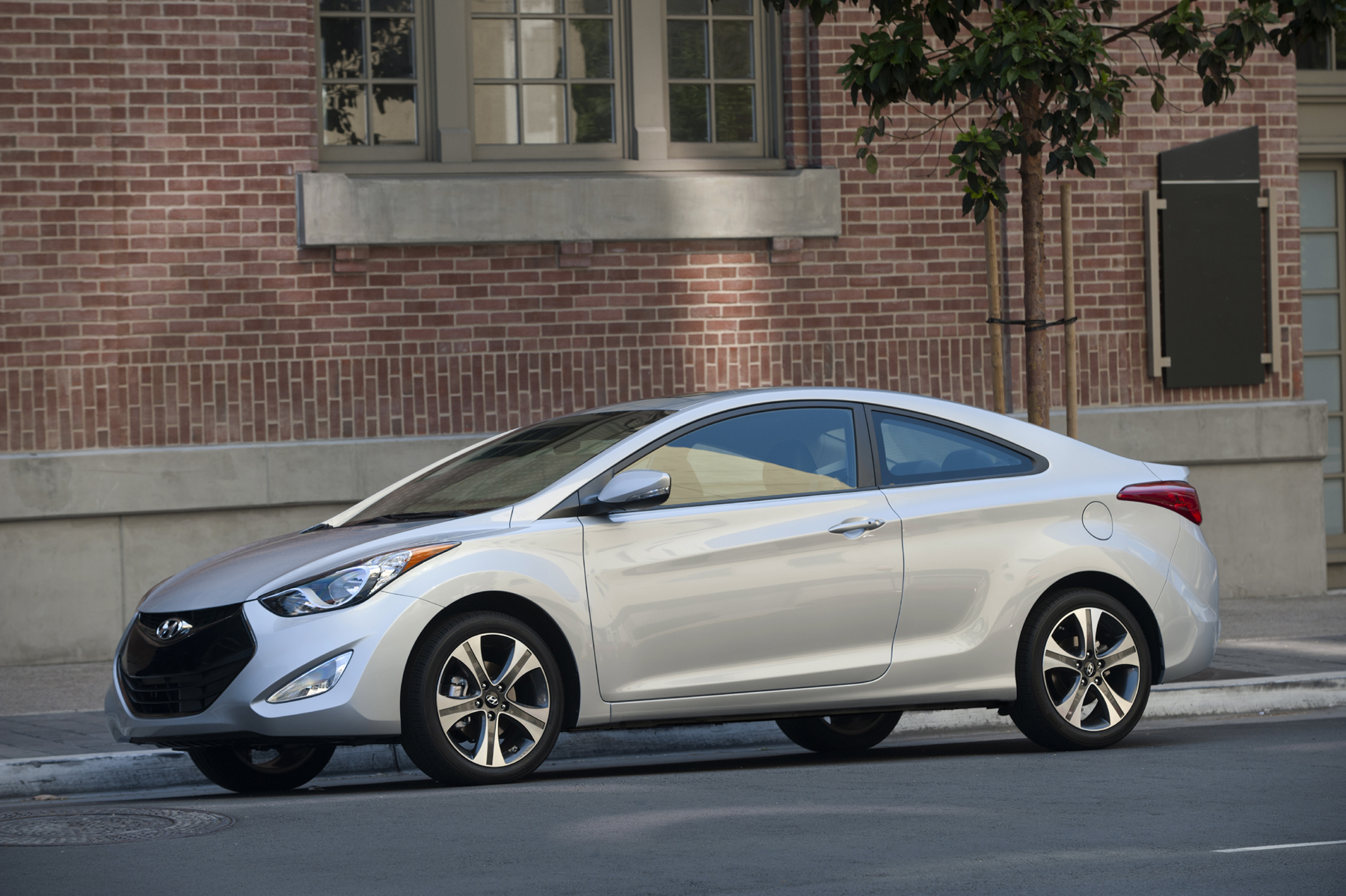 On the outside, the Elantra Coupe is a sweet swoop of surprisingly sophisticated design that borrows some cues from its four-door sibling, but strikes out on its own path, with more edgy foglamps, and a tick more length. Although the front blacked-out grille looks a bit clunky, with a lower lip overhanging just a few millimeters too much, the headlamps and taillamps are sleek, jeweled slits angling toward the car's midsection.

Sculpting carves out aerodynamic-looking lines across the side panels, which are punctuated by pronounced wheel arches front and rear. The back end is slightly upturned and higher than the front, which gives this runabout a Speedy Gonzales look, along with an integrated decklid spoiler on the SE trim and chrome-tipped exhaust pipes.

The Hyundai Elantra Coupe is available in two trim levels: GS with the six-speed manual transmission and the SE priced at $19,745.

Under the hood is a 1.8-liter inline four-cylinder shared with the Elantra sedan; it delivers 148 horses and 131 lb.-ft. of torque. Matched to the motor is a standard six-speed manual transmission; an automatic six-speed also is available. Technologies such as electronic throttle control help boost responsiveness and fuel economy, which is 29 mpg city/40 mpg highway with the manual transmission and 28/39 with the automatic. 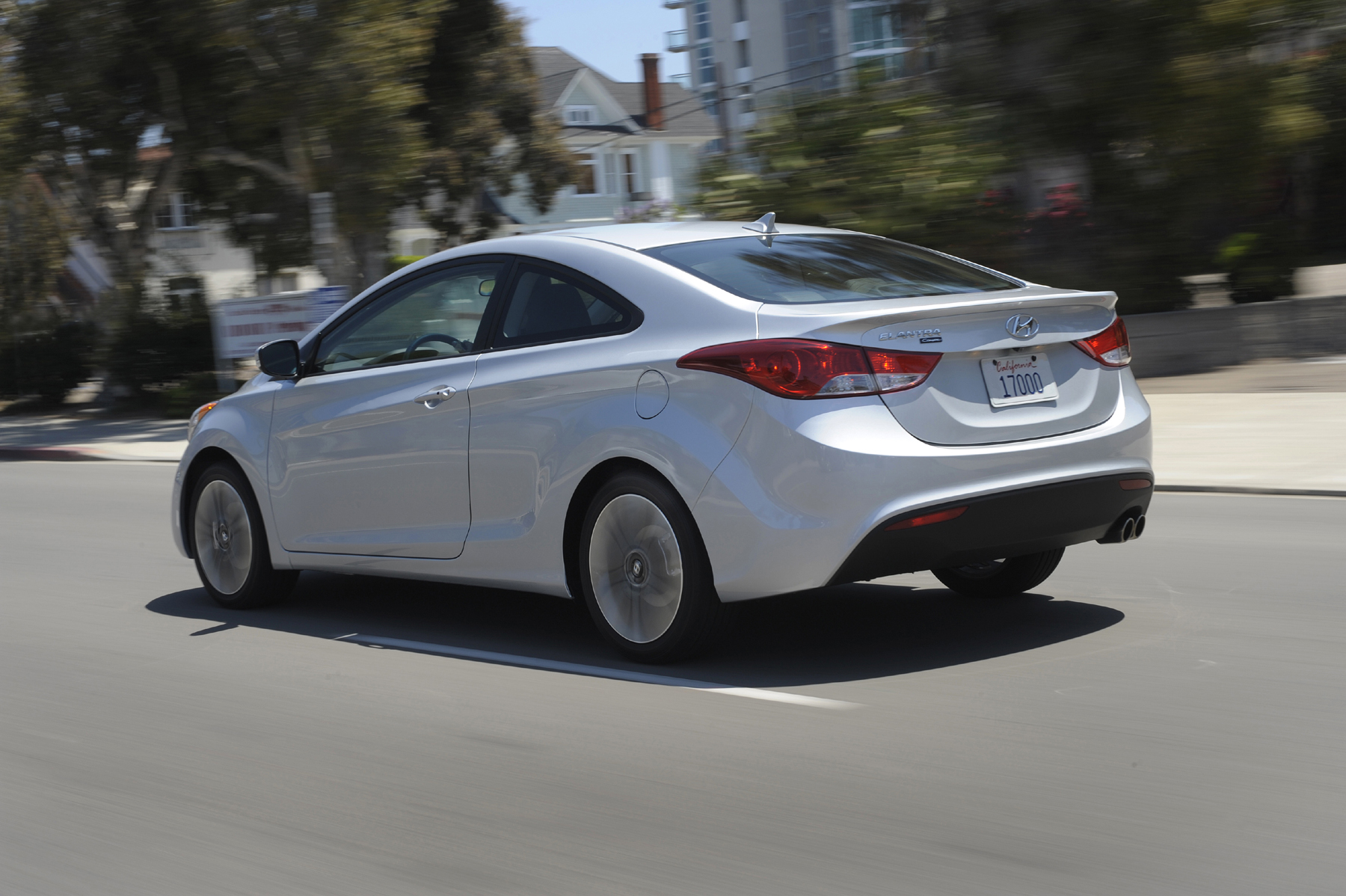 On the road, it's clear this coupe was tuned for a sportier and firmer road feel than the sedan version. MacPherson strut front suspension, with coil springs and gas shock absorbers is matched with a lightweight coupled torsion beam rear suspension design, creating steering stability.

We drove the SE version that is engineered with slightly different suspension geometry for an even sportier ride. Our drive included a variety of roads and different road surfaces and we enjoyed the coupe's handling in the corners, with little body roll and the ability to cut in and out of traffic with ease. We appreciated the gearing in the automatic transmission and the ability to shift gears on our own using the Shiftronic system, but didn't get to try the manual, which would be a great choice in this car.

Notable features are the crisp power steering feel that comes from the motor-driven power rack-and-pinion steering and good brakes. Stability control is standard, as are four-wheel disc brakes with ABS, electronic brakeforce distribution and brake assist. We also liked the aluminum pedals that come on the SE version that adds another sport touch. Although the coupe is designed to seat five riders, four passengers would be a smarter choice, especially for the climb and tumble into the back seats.

Inside, the coupe is surprisingly spare and modern-looking, with a thoughtful layout and easy-to-access knobs and buttons. There are a collection of nice touches like standard heated seats, cruise control, air conditioning, power windows, a Bluetooth hands-free calling system with voice recognition, a tilt/telescoping steering wheel and deeper side bolsters on the seats than those on the Elantra Sedan for a more supportive driving experience.

The standard audio system is a 172-watt AM/FM/satellite radio/CD/MP3 set up with six-speakers and iPod/USB/auxiliary input jacks. Touch-screen navigation is available; it includes a high-resolution, voice-activated 7-inch screen. The system also integrates a rear-view camera. 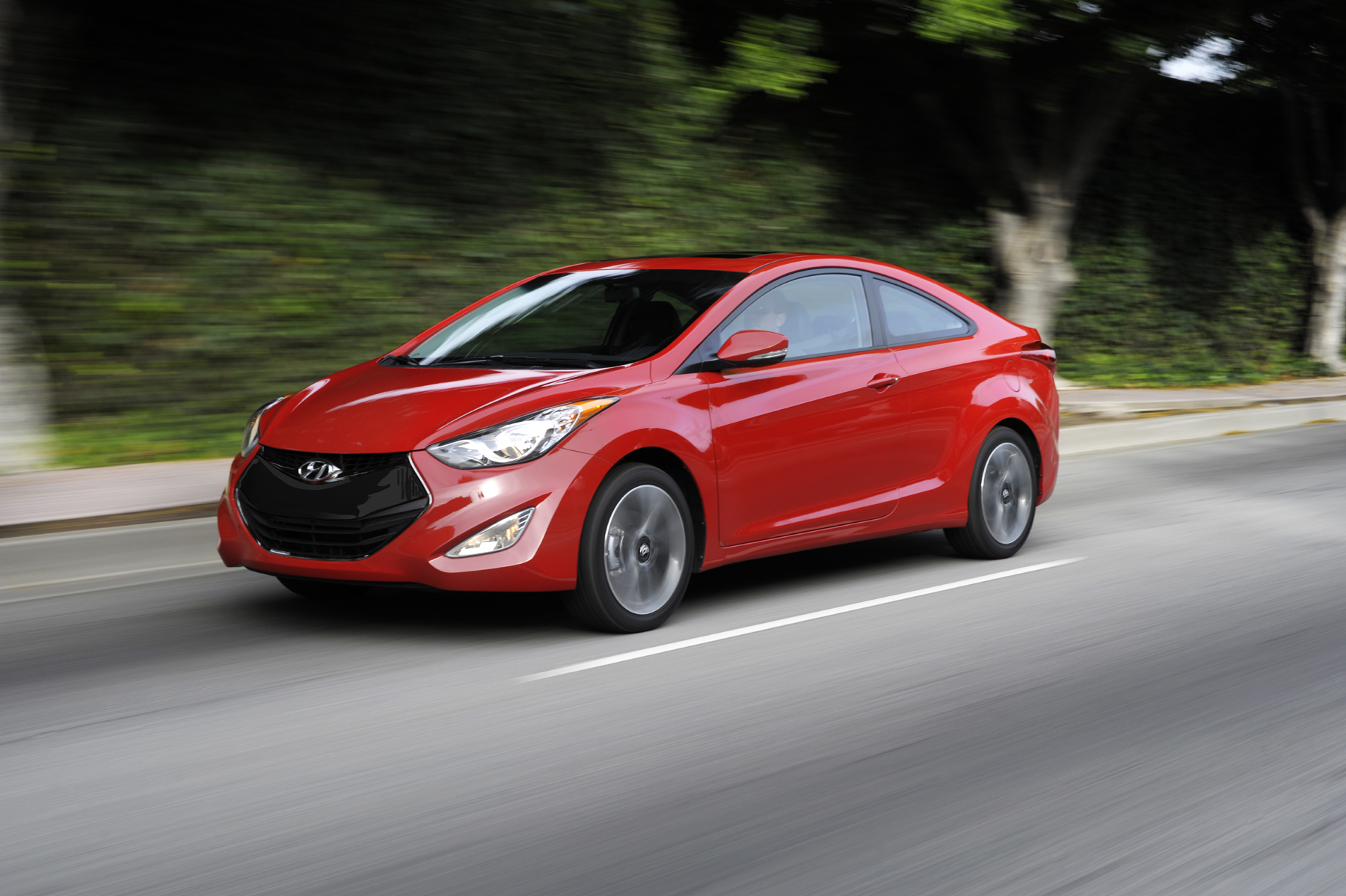 Wrapped in a stylish small package, this front-wheel-drive sports machine may not be a pocket rocket, but it's a quick ride that sips gas and delivers a lot of fun on the road.