The 2013 Chevrolet Sonic hatchback with its youthful and aggressive design is destined to seriously challenge the likes of Ford's Fiesta, the Honda Fit and Toyota Yaris. 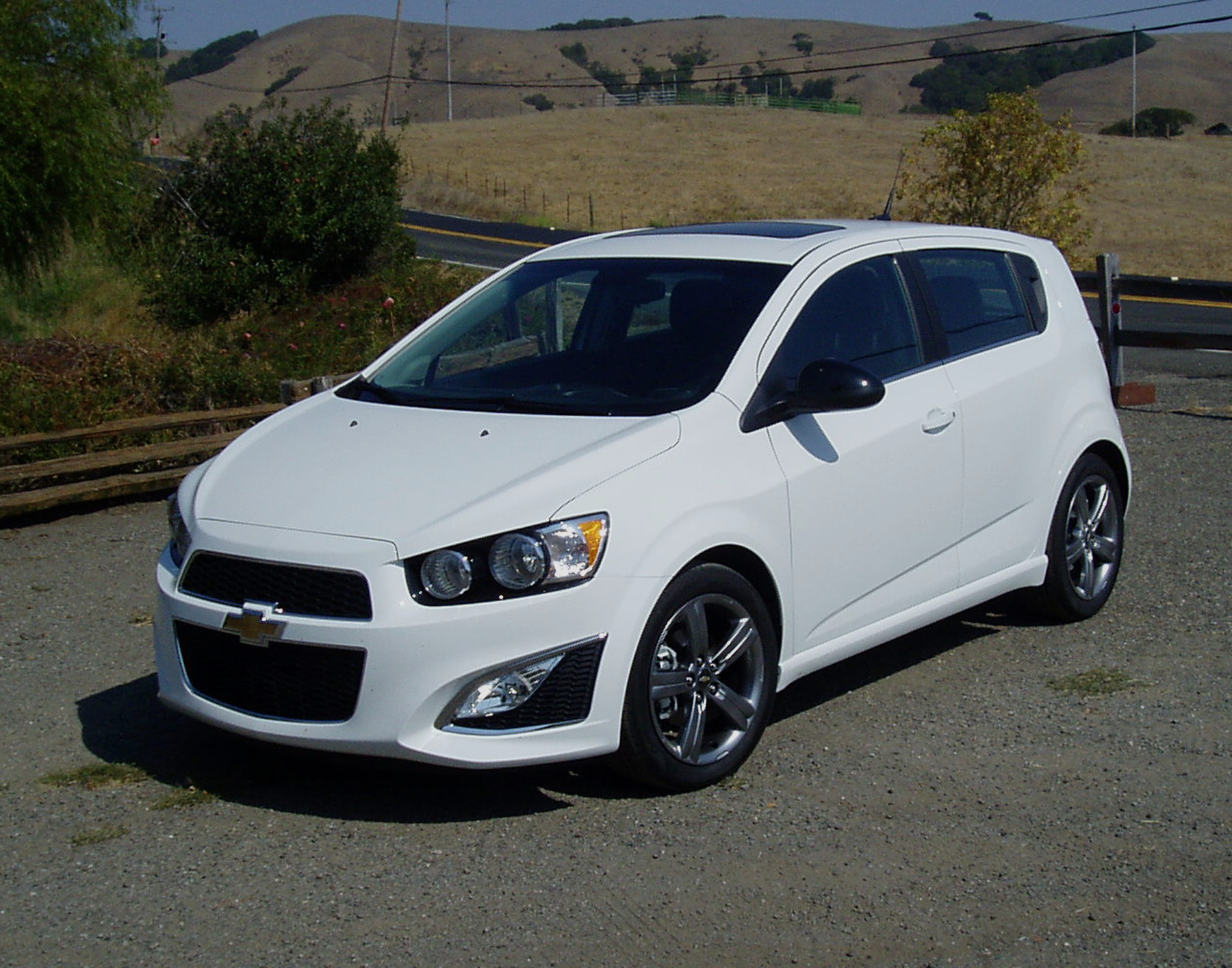 Sonic is offered in two body styles: the sedately styled four-door sedan and the much sportier, performance oriented Sonic five-door hatchback. Now enters the Sonic RS -- an even sportier five-door hatch for 2013.

Two engines will see duty in the Sonic: a standard Ecotec 1.8-liter four-cylinder 130-horsepower engine paired with either a five-speed manual or six-speed automatic transmission; or an optionally available 1.4-liter turbocharged engine that delivers 138 horses along with 148 lb.-ft. of torque. Sonic's turbocharged 1.4-liter is the same engine used in Chevy's Cruze, but in a smaller, lighter package, and with a considerably more pronounced performance feel.

My 2013 Sonic RS tester came with the 6-speed manual transmission in an exterior finish of Summit White and a two-tone gray interior. The base sticker was $20,995, while the sunroof and destination charge elevated the final total to $21,845.

In my opinion, the form and structure of the 2013 Chevrolet Sonic RS are more advanced and visually appealing than both the Ford Fiesta and Honda Fit. Though I didn't find the sedan as appealing as the hatch, surprisingly a small focus group of young women actually overwhelmingly preferred the sedan, finding it more sophisticated and mature and less "boy-racer." 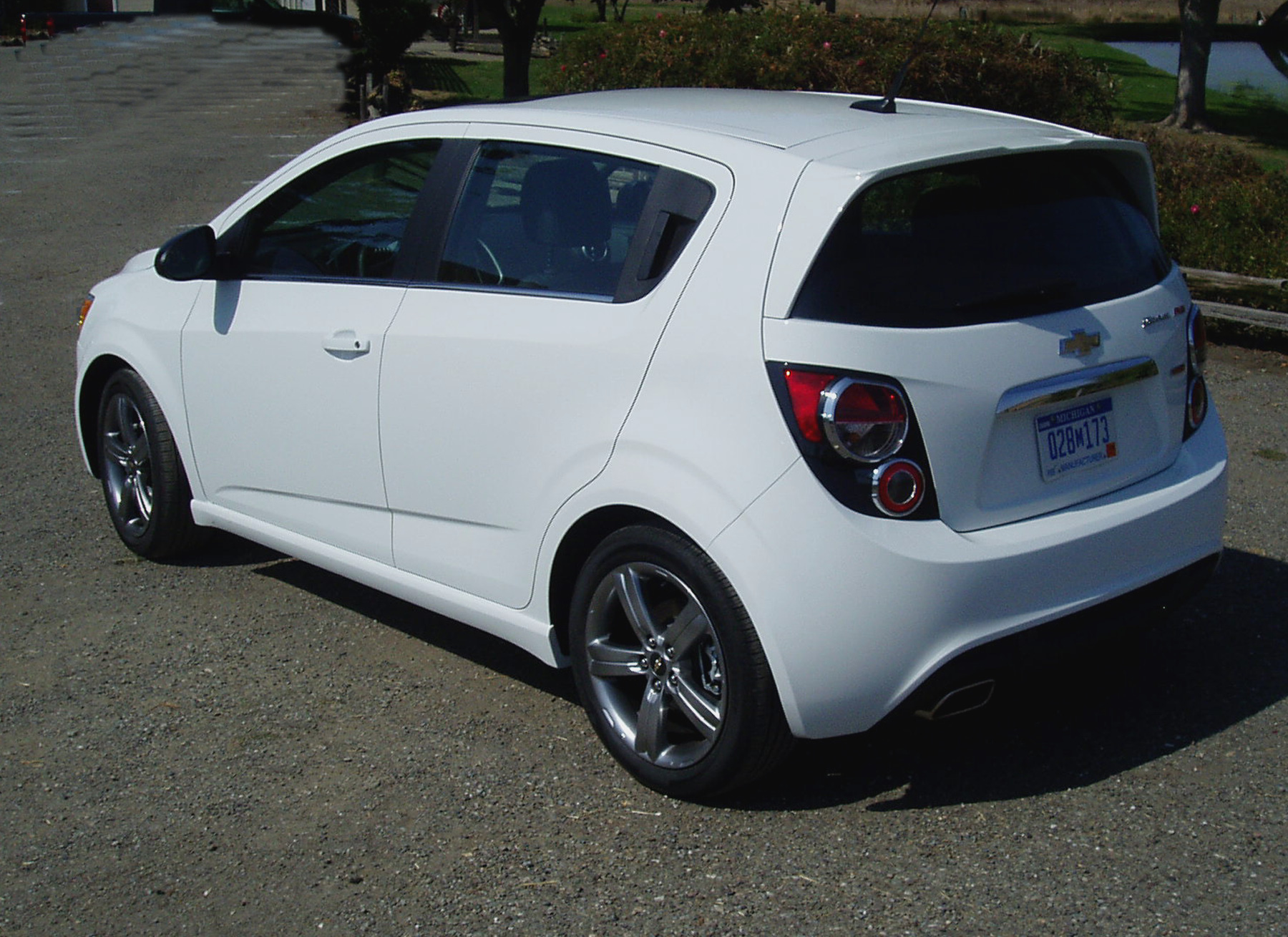 The turbocharged 1.4-liter delivers instantaneous throttle response with virtually no noticeable turbo lag. Fuel economy is rated 27/34 mpg. The ride quality though firm was not harsh or uncomfortable. Handling performed positively and quickly through the electric power steering. The 10 mm lower ride height and unique ride and handling package of the Sonic RS delivers an exceptionally stable and planted feel for a supremely heightened fun factor.

The Sonic projects a sense of strength, stability and refinement from virtually every angle. Its stance is wide and planted and the sharply raked body lines suggest forward motion even when parked. Up front is a dual element grille, while in the rear are motorcycle inspired round taillamps.

Though sharing the same basic DNA, the Sonic sedan and five-door models are distinctively different. The Sonic RS five-door comes in a tight, two-box shape with sporty, aggressive lines, while the sedan's "notchback" profile displays a more sophisticated and mature presence.

Moving to the inside, the cabin of the Sonic RS continues with the exterior's motorcycle-inspired theme, featuring a large, round analog tachometer set within an asymmetrical LCD readout, including a large digital speedometer display. The automatic shift knob displays a "cobra head" design, while the manual shifter has a chrome-ringed knob. The interior features user-friendly controls in an uncramped ambience with a sporty, yet functional flavor. 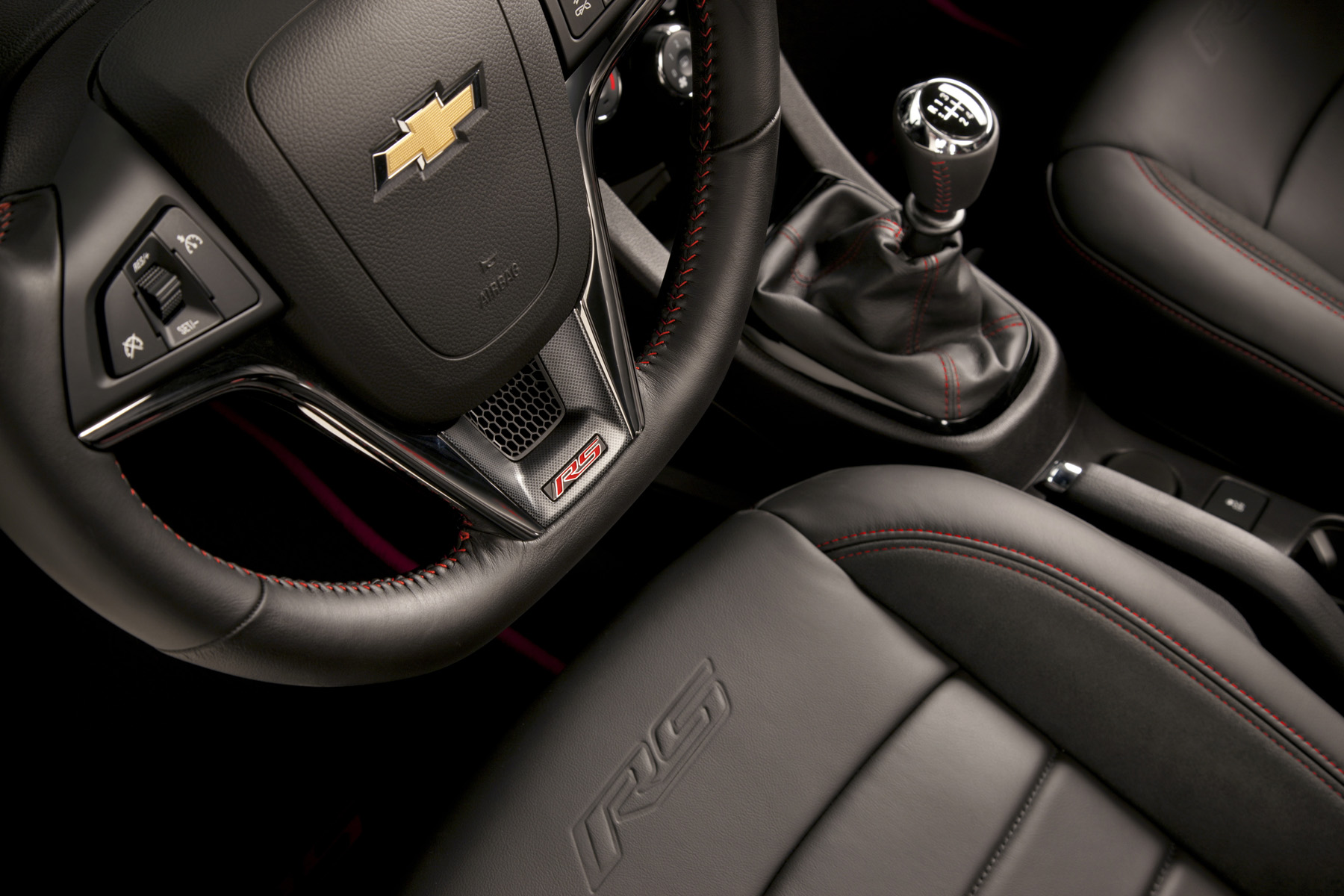 The new 2013 Sonic RS promises to take its place in the winner's circle and is my pick of Chevy's subcompact litter. The Sonic RS showcases a sinister, performance-oriented aura compared to another new runt in the Chevy litter: the Spark with the cute and practical persona.