Ford is committed to and focused on accelerating its fuel economy leadership with two 2013 C-MAX models: C-MAX Hybrid and C-MAX Energi Plug-in Hybrid. Both new models employ the next generation of Ford's powersplit technology that allows electric mode operation at speeds higher than any other competitive vehicle. 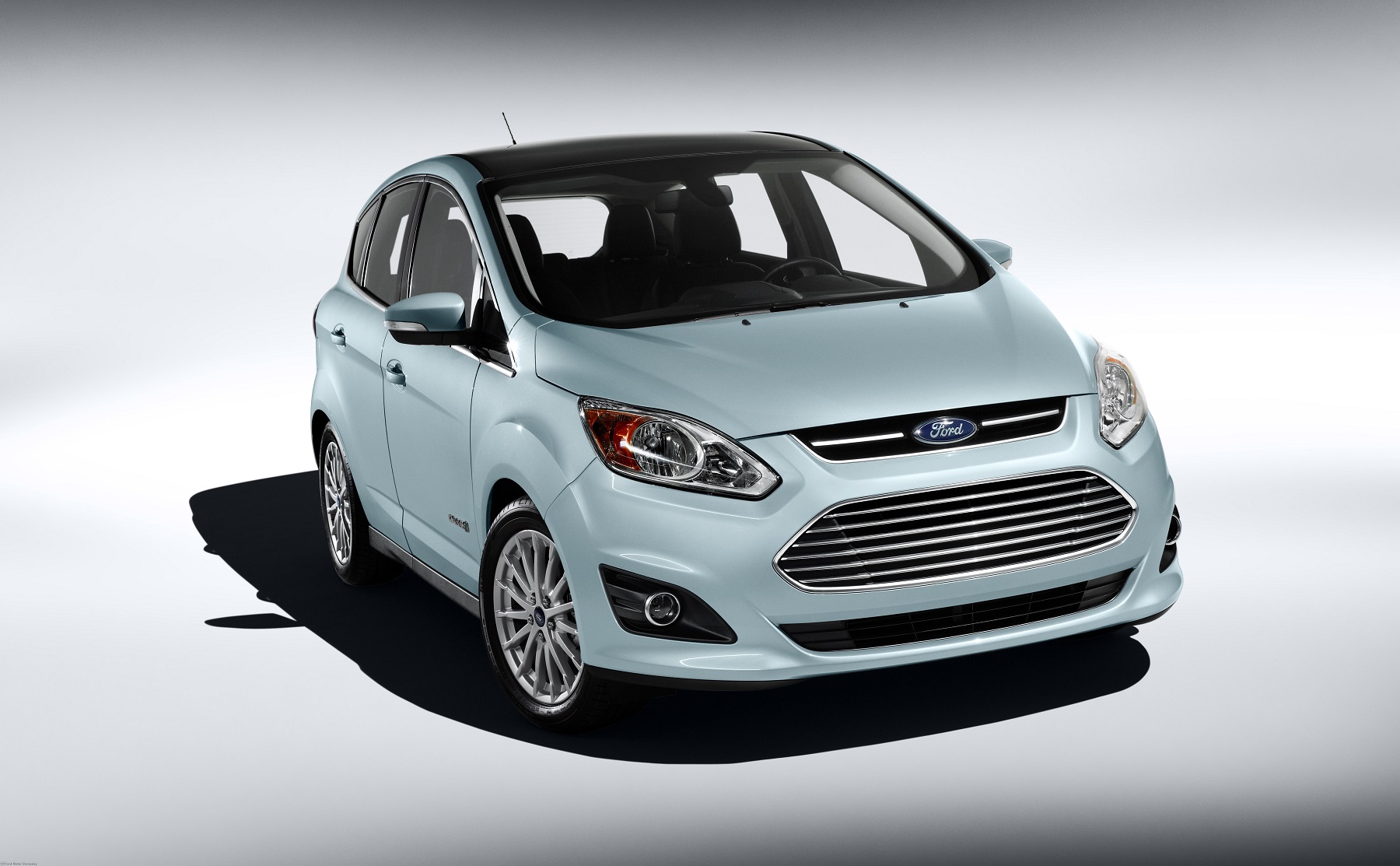 Manufacturer photo: The 2013 C-MAX Hybrid provides drivers with plenty of interior versatility and flexibility along with the urban maneuverability of a smaller vehicle

C-MAX vehicles headline Ford's transformed model lineup, a third of which will feature a model designated 40-mpg or more. Both C-MAX Hybrids are the automaker's first dedicated hybrid vehicle line.

We'll focus here on the 2013 C-MAX Hybrid, which starts at $25,200. It is powered by a 2.0-liter 16-valve inline four-cylinder Atkinson cycle engine. Horsepower is rated at 141 with torque rated at 129 lb.-ft. The gasoline engine is paired with a Permanent Magnet AC Synchronous motor that delivers 118 horsepower and 117 lb.-ft. of torque. The combined system's total power output is 188 horsepower and its EPA fuel economy is rated at 47 miles per gallon in both city and highway driving.

My test Ford C-MAX Hybrid came in SEL trim with the exterior finished in tinted Ruby Red metallic and Medium Light Stone leather seating. The base price was set at $28,200. Not only is the 2013 Ford C-MAX Hybrid an exceptionally good looking vehicle, it's also exceptionally fun to drive. It comes loaded with connectivity and technology, as well as an impressive inventory of safety features.

The C-MAX Hybrid is extremely versatile, with reconfigurable seating and cargo arrangements. In terms of performance, it may be driven in a modest and economical fashion or it may be prodded with gusto. The latter scenario delivers a healthy and pleasing growl from the gas engine -- which was unexpected from a hybrid vehicle. Acceleration is brisk and the handling characteristics of the C-MAX register in the sporty column. Ride quality is satisfying as well, with accommodations for five to travel in comfort.

Ford's powersplit architecture allows the electric motor and gasoline-powered engine to work together, or separately, to maximize efficiency. The engine also can operate independently of vehicle speed, charging the batteries or providing power to the wheels as needed. The motor alone can provide sufficient power to the wheels in low-speed, low-load conditions and work with the engine at higher speeds.

The C-MAX Hybrid is visually pleasing in a five-door hatch configuration that comfortably seats five with a split fold-flat second row seat and appears as a sort of mini-wagon, which Ford refers to as the MAV (Multi Activity Vehicle). The C-MAX line leads off with Ford's new signature grille and features a high roof design that delivers a higher command-style seat position instead of a cockpit-type.

The C-MAX features Ford's innovative hands-free liftgate that allows quick and easy access to the cargo area without ever needing to fumble for keys. A gentle kicking motion under the rear bumper opens the liftgate when used in combination with a key fob the driver keeps nearby that tells the car it's OK to engage. The liftgate may be closed in the same manner.

The new Ford C-MAX Hybrid may appear small at first glance, but it's definitely big on delivering the amenities and performance often only found in larger, more expensive vehicles, and the fact that it is a hybrid only adds to its overall appeal. Sure, Ford offers larger vehicles if needed, but the C-MAX Hybrid delivers outstanding fuel economy and a lot of value in an affordable package.