The 2014 BMW 2 Series Coupe raises the bar for subcompacts for dynamic driving ability, aesthetic design, and emotional appeal. It's a distinctive concept with a two-door body in a classic three-box design, seating for four, rear-wheel drive, a choice between a pair of engines and a chassis with the focus squarely on sporting ability. 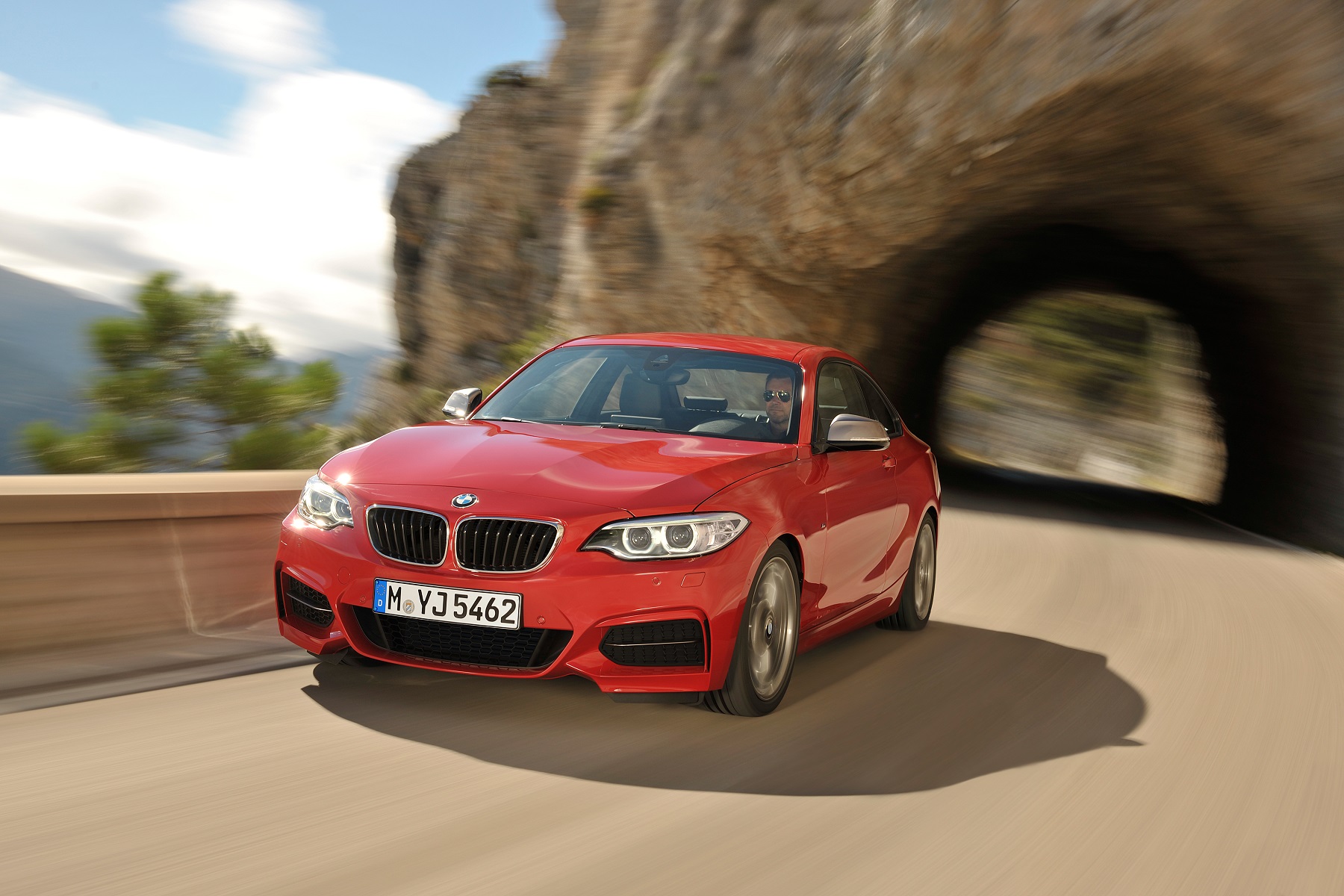 The BMW M235i is the most powerful gasoline-driven BMW M Performance Automobile with its motive force delivered by a unique M Performance 3.0-liter inline six-cylinder with TwinPower Turbo technology that cranks out 320 horses in a range from 5,800-6,000 rpm, while generating 330 lb.-ft. of torque from 1,300-4,500 rpm. The high-performance M235i also features M-specific chassis tuning, which includes M Adaptive suspension, M Sport Braking system, variable sport steering, and Michelin Pilot Super Sports tires. The exhaust has even been specifically tuned for the M235i.

The 2 Series Coupe is available with either a six-speed manual gearbox or an eight-speed automatic transmission, with the M235i offering a Sport version. 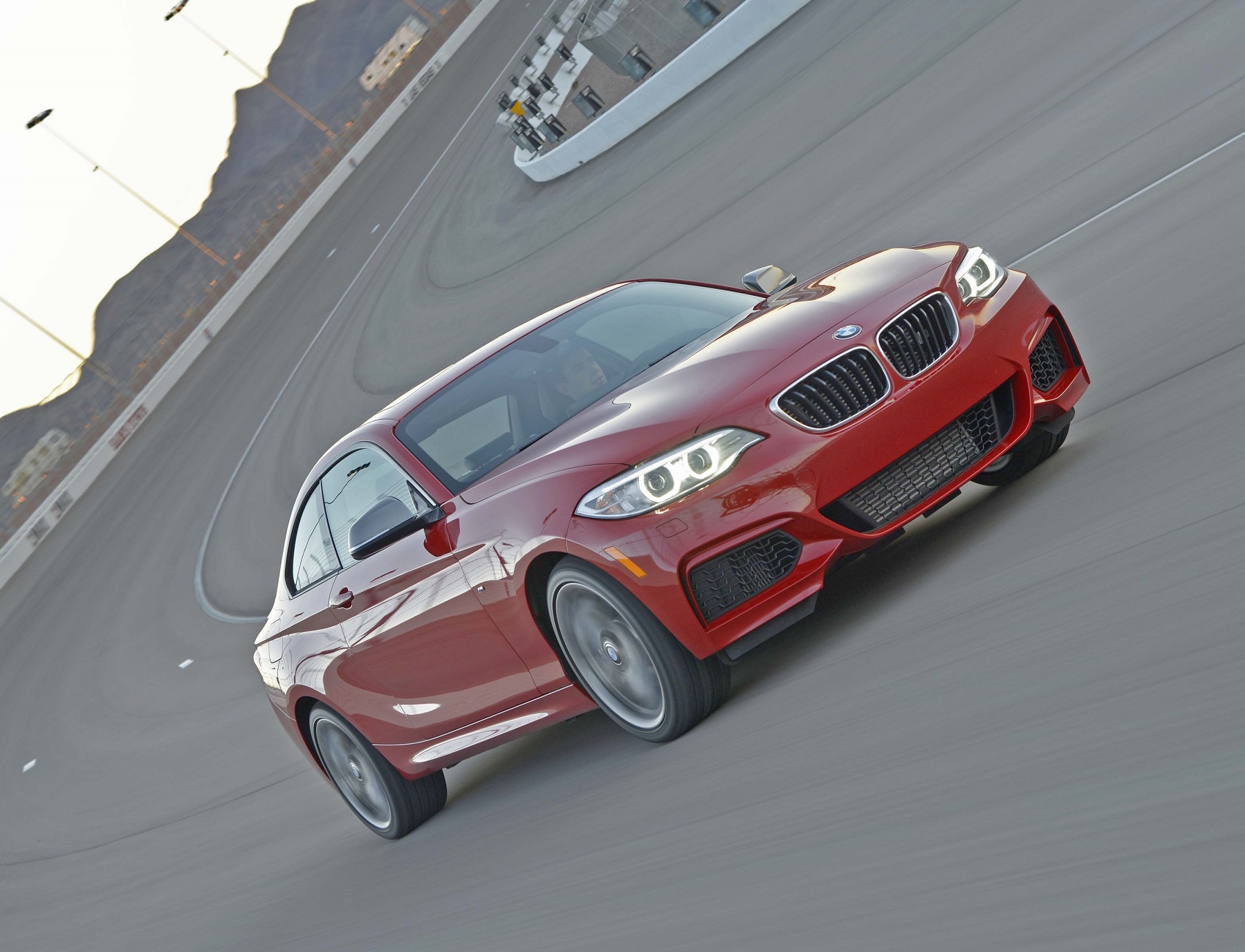 The BMW 2 Series Coupe displays a sporting presence and athletic agility combined with an evocative and emotional exterior design. The defining elements of its interior include a driver-focused cockpit design with BMW's contemporary functionality.

Inside, the Coupe is fitted with the BMW iDrive operating system, featuring a freestanding onboard monitor in flatscreen design. A 6.5-inch display is standard. Adding navigation enlarges the screen to 8.8 inches and adds a touch-sensitive surface to the controller on the center console, which allows the driver to more easily input characters.

My test BMW 2 Series coupe was an M235i with the eight-speed Sport automatic. We were afforded the opportunity to put the 2014 BMW M235i Coupe through its paces in normal, everyday driving scenarios, as well as on the high-speed banked oval of the Las Vegas Motor Speedway.

It goes almost without saying that the 3.0-liter, turbocharged, inline six-cylinder engine is an incredible force -- a potent motor in a subcompact, rear-wheel drive vehicle that is indeed indicative of BMW's "Ultimate Driving Machine" slogan.

The M235i is truly a driver's car that may be piloted in either a docile around-town cruising mode, or in all-out "pedal to the metal" fashion. The automatic transmission may be operated in a normal Comfort mode, Sport mode, or in an invigorating Sport Plus mode. It may be operated in a fully automatic state, or gears may be selected manually via either steering-wheel-mounted shift paddles or the console-positioned stalk, but it is pleasing in either format and every mode. The Sport and Sport Plus modes deliver elevated performance and response levels as well as more evocative engine and exhaust notes. 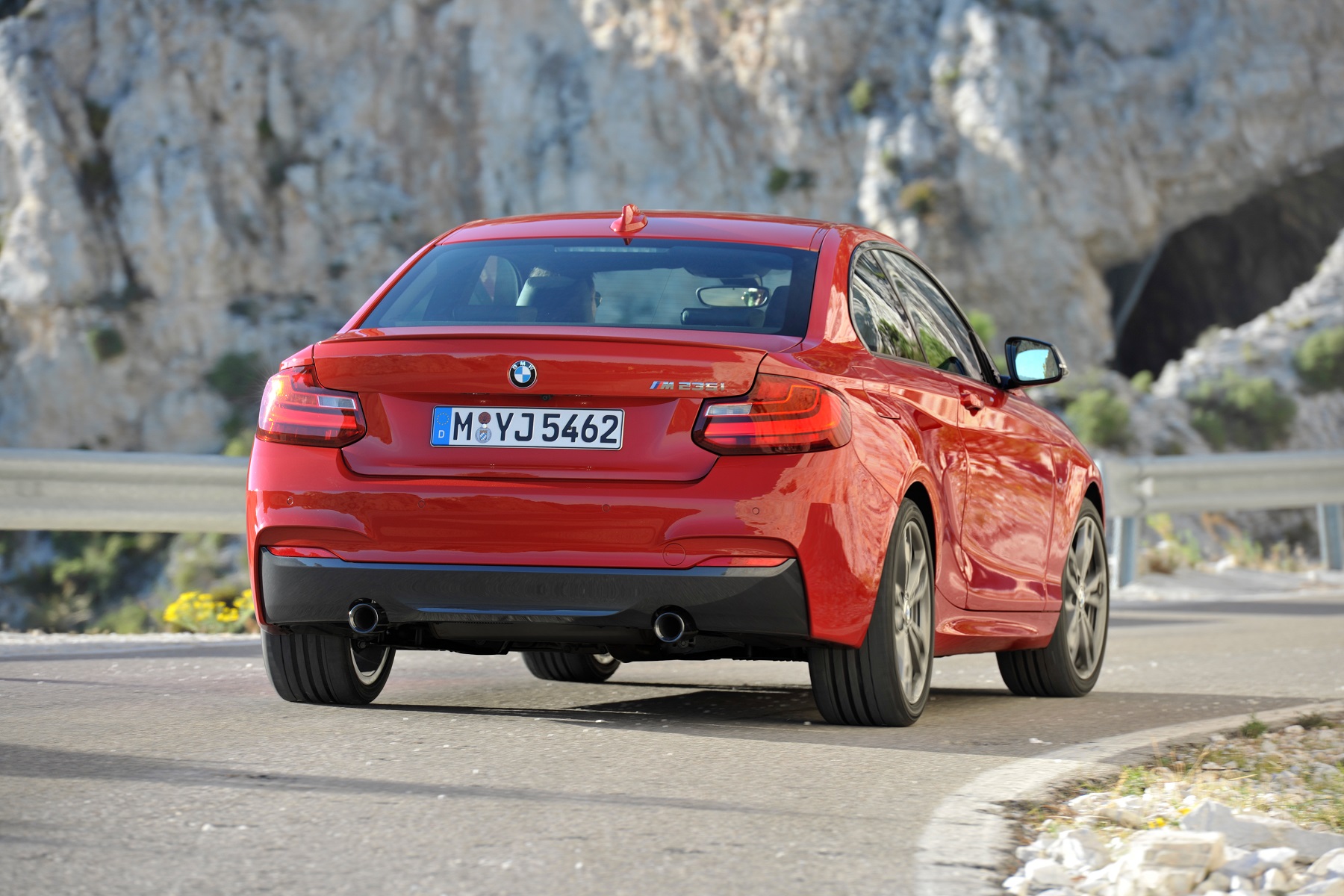 Traction and stability systems may be switched off for more spirited driving maneuvers by highly skilled drivers, for a thrill ride, or a drifting experience on track. Acceleration is stellar, handling characteristics are superb, and the ride quality may be adjusted to suit boulevard cruising or hot lapping. The high speed oval provided us a rare chance to drive on an extremely banked track, where we were limited to following a lead instructor vehicle at a top speed of 125 mph, though it was clear the M235i clearly had more to give, without even breathing hard.

The 2014 BMW M235i Coupe displays a highly emotional, bold, and muscular image with power and performance to spare along with a reasonable operational efficiency capability. It is definitely a top player on the subcompact performance coupe field.