We'll admit Jaguar produces a luxurious and highly desirable lineup of vehicles, but certainly nothing more alluring and capable than its F-Type Roadster. That was the case until we drove the newest entry to the Jaguar stable: the two-passenger F-Type Coupe. 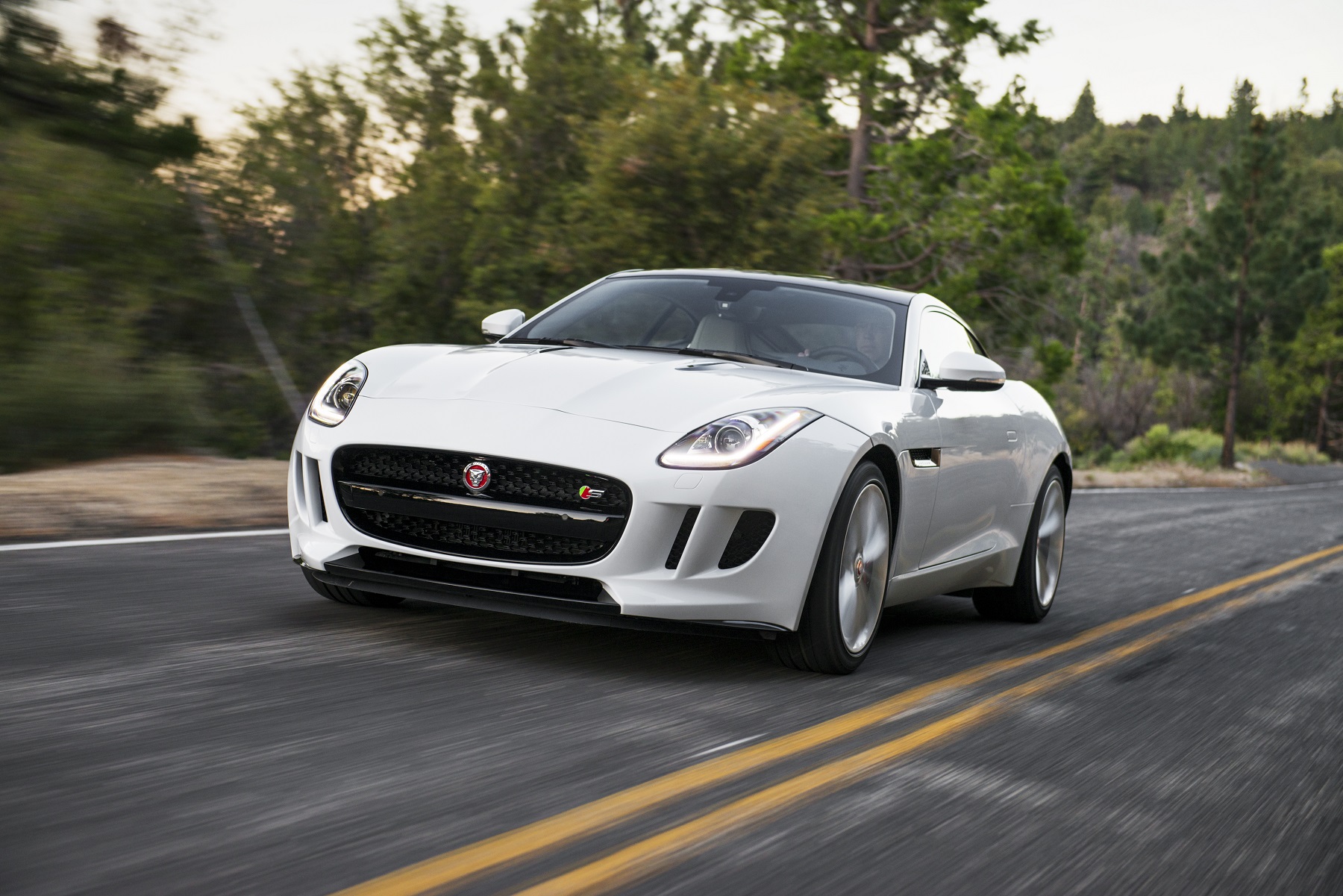 Manufacturer photo: The Jaguar F-Type represents a return to the company's heart: a two-seat sports car focused on performance, agility and driver involvement

It comes in three variants starting at $65,000: the base F-Type Coupe and the F-Type S Coupe, both powered by V-6 engines; and the F-Type R Coupe with V-8 power. All F-Types have supercharged engines.

The base F-Type draws its energy from a 3.0-liter V-6 that produces 340 horsepower along with 332 lb.-ft. of torque. Next up is the F-Type S model, also powered by a specially tuned 3.0-liter V-6 that pumps out 40 additional horses for a total of 380, while boosting the torque level to 339.

At the top of the rear-wheel-drive F-Type lineup, is the V-8-powered R, which delivers a more-than-substantial 550 horsepower while generating an impressive 460 lb.-ft. of torque. 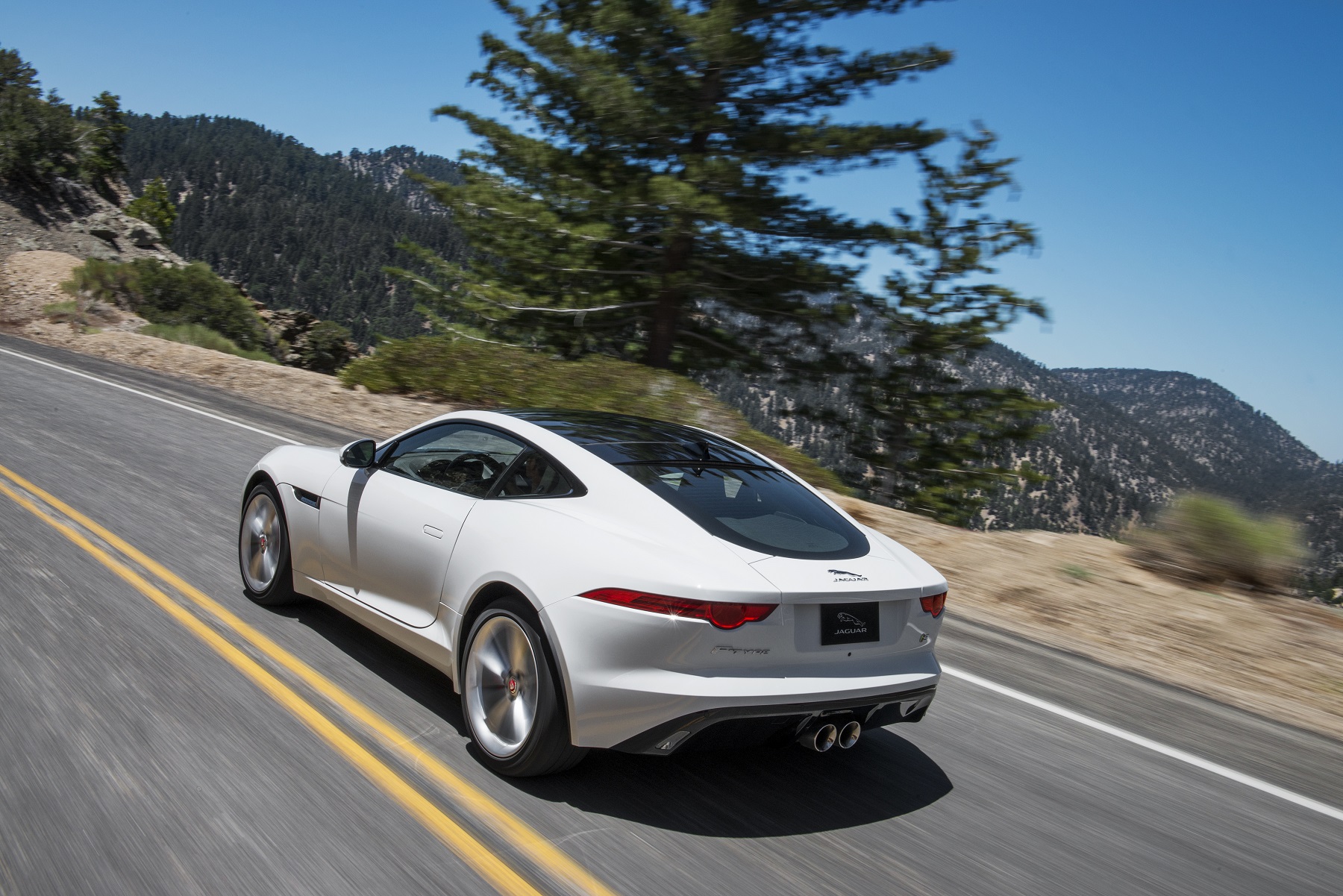 Six-cylinder F-Types feature a centrally located dual exhaust that pays homage to the E-Type introduced in 1961, while the V-8 R model F-Type rids itself of exhaust gasses through outboard, twin-dual (quad) exhaust tips.

While I am generally a fan of open vehicles, the F-Type Coupe seems to be the preferred model by most admirers, including its chief designer. Visually, the 2015 Jaguar F-TYPE Coupe is seductive from virtually every angle, continuing Jaguar's sporting bloodline that reaches back more than 75 years.

Exterior door handles pop out, activated by touch or fob and retract to a flush position when the car is in motion. Inside, the 1+1 cockpit is unashamedly driver-focused in terms of controls and switchgear positioning. The dashboard is low, and provides optimum visibility.

A deployable center vent atop the dash disappears from view along with control icons when the ignition is off. The purposeful, bronze accented toggle switches below the three dual-purpose rotary knobs, and paddle shifters along with the substantial three-spoke steering wheel contribute to the sporty persona of the F-Type that is not unlike the feel of a jet fighter cockpit.

During the national press launch, I drove the F-Type S and F-Type R Coupes in freeway driving, twisting back road scenarios, on a racetrack, and on a wet skid pad setup at Willow Springs Raceway in southern California.

In a word, the 2015 Jaguar F-Type coupes are "F-nonmenal" both in terms of styling and performance. The technology level is phenomenal as well.

The F-Type R Coupe is fitted with an Adaptive Dynamics system that actively manages the vehicle's handling, performance, and suspension. The Configurable Dynamic Mode allows the driver to select which elements of the Dynamic Mode are desired; for instance, steering feel, gear changes, and throttle response may be sharpened while allowing the ride on models with Adaptive Dynamics to remain unchanged. The system is controlled via the 8-inch central touchscreen, and allows the driver to save vehicle settings.

Acceleration is awesome and braking is positively confidence-inspiring thanks to the oversized carbon ceramic rotors. The ride quality and stability renders the car solid and totally planted, but without any harshness. The steering input is positively spot-on, with instantaneous response. In fact, every response from the steering to transmission shift points, throttle response, braking and suspension has been finely tuned to deliver the most connected, accurate and involved driving experience possible.

The driver's environment is emphasized through an asymmetrical cabin layout with all the controls placed naturally to hand and logically grouped, allowing for maximum attention on the driving experience. A grab handle sweeps down the center console on the passenger side, delineating it from the driver's position and wrapping around the center console.

The F-Type S certainly delivers more than satisfactory performance (all I can handle and then some) and its exhaust note seems more velvety. On the other hand, the F-Type R, despite its more raucous and raw exhaust tone generates considerably more power for not that much more expense when comparably equipped, and it may even offer a better resale value.

The F-Type marks Jaguar's serious return to offering a true sports car that reflects its heritage, but in a most modern and elegant way.