Hyundai introduces the second-generation Sonata Hybrid -- plus the first-ever Sonata Plug-in Hybrid for 2016. 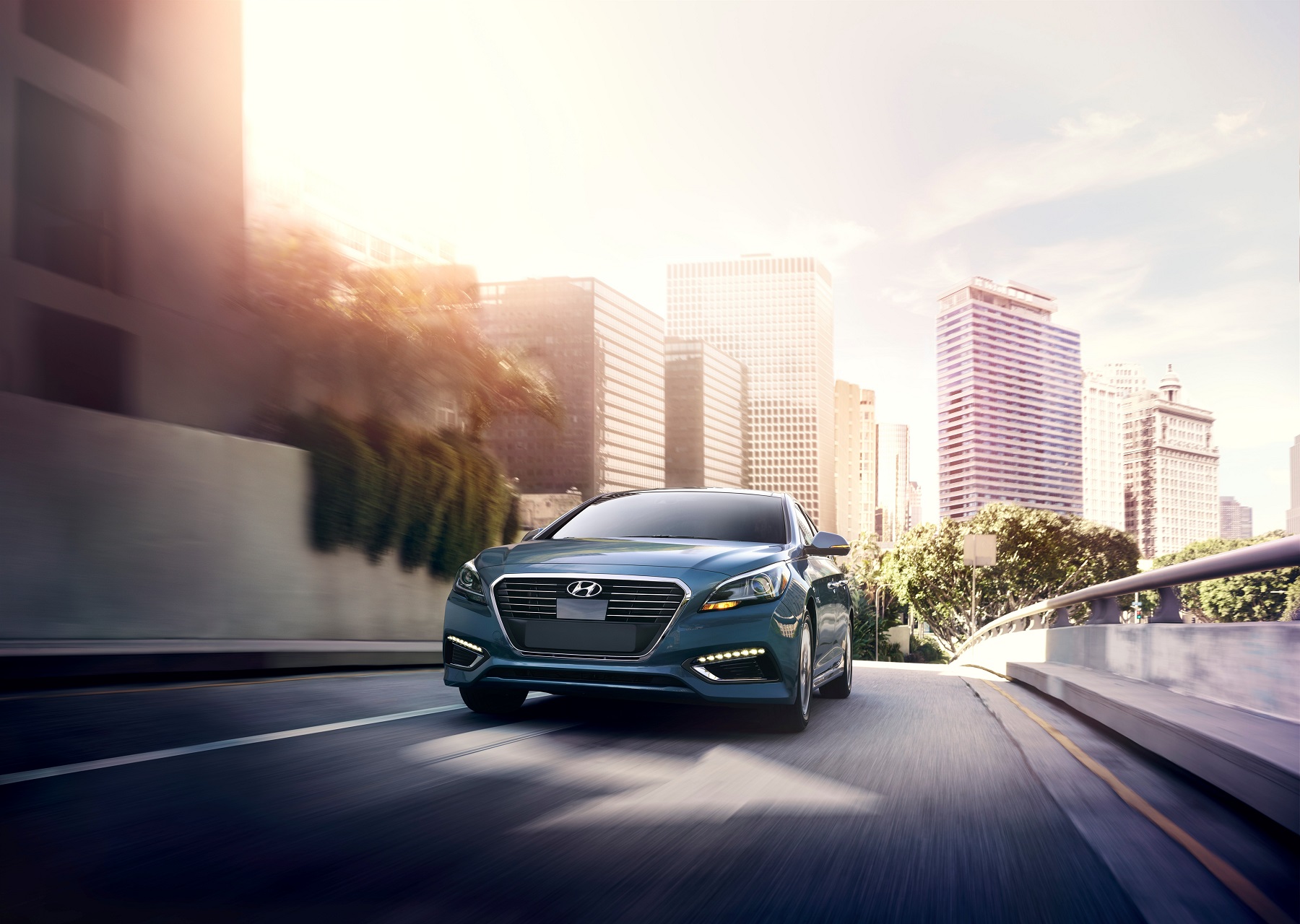 Hyundai's award-winning design of the 2016 Sonata Hybrid continues with the automaker's "Fluidic Sculpture" theme, but is enhanced by a series of functional changes to the front and rear fascia highlighting its efficiency and the advanced technology beneath its skin.

These visual changes were instrumental in lowering the coefficient of drag to a low 0.24; the lowest in its class and identical to the Tesla Model S. Visual enhancements to the Hybrid's exterior include a unique larger grille, front and rear bumpers, front fenders, front and rear lights, chrome side sill moldings, Hybrid badging, and new eco-spoke alloy wheel designs. 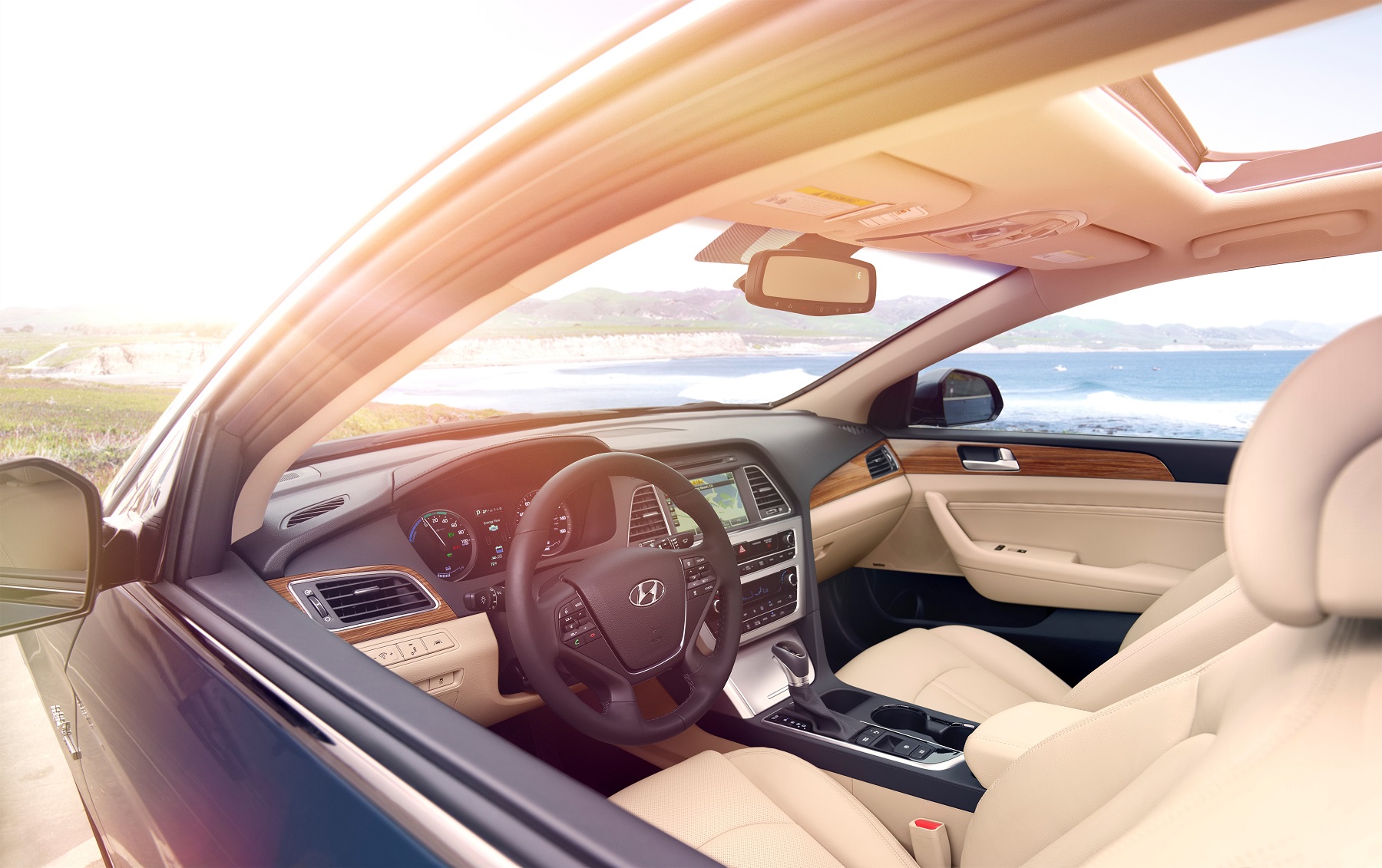 The Sonata Plug-in Hybrid electric motor cranks out 16 more horsepower than the regular Hybrid, thanks to its 370-volt motor and larger battery. The combined net horsepower is 9 horsepower more than the base hybrid.

This modular layout offers Hyundai a number of advantages: Most importantly, the TMED configuration provides flexibility to mix and match different-sized electric motors and transmissions to suit different vehicles. For example, Hyundai has several different six-speed automatic transaxles in its portfolio, any of which could be utilized in a hybrid application.

The Direct Hybrid Blue Drive System is supported by a 2.0-liter four-cylinder engine that delivers 154 horsepower along with 140 lb.-ft. of torque paired with a 270-volt Maximum Interior Permanent Magnet Synchronous Electric motor that produces 51 horsepower and 151 lb.-ft. of torque. The combined gas/electric net horsepower is 193 -- an 11-hp increase over its predecessor.

The Sonata Plug-in Electric Hybrid motor produces 67 horses and joins with a 2.0-liter four-cylinder engine to produce a combined net horsepower of 202. The Lithium polymer battery output for the plug-in version is 12kW higher than the standard Sonata Hybrid, offering a full-electric range of 24 miles on a complete charge.

The system transfers energy through a six-speed automatic transmission without a lock-up torque converter. Regenerative braking plays an important role in recovering kinetic energy lost during braking and storing it for future propulsion.

I had time behind the wheel of both models, and both the 2016 Hyundai Sonata Hybrid and Sonata Plug-in Hybrid receive high marks. The performance level is admirable, with more than satisfactory acceleration and braking. The steering and overall handling characteristics are positive, but not necessarily sporty, and the ride quality and comfort are both very nice -- neither too firm, nor too soft.

The cars are visually the same except for specific badging, though the plug-in version also boasts a left-side front-fender charge port door that's not required on the regular hybrid. Internally, the plug-in hybrid comes with a selectable drive mode feature that allows for Eco, Normal, and Sport mode with manual-shift capability.

The 2016 Hyundai Sonata Hybrid ranks right at the top of the list for attractive, economical midsize hybrid sedans. The Sonata Hybrid performed beautifully, and one is hardly aware of its Hybrid operation, which is virtually seamless except for the gas engine shutting down when the car comes to a complete stop.