The 2017 Honda Ridgeline returns following a two-year hiatus, and it now takes on a more traditional truck-like appearance. 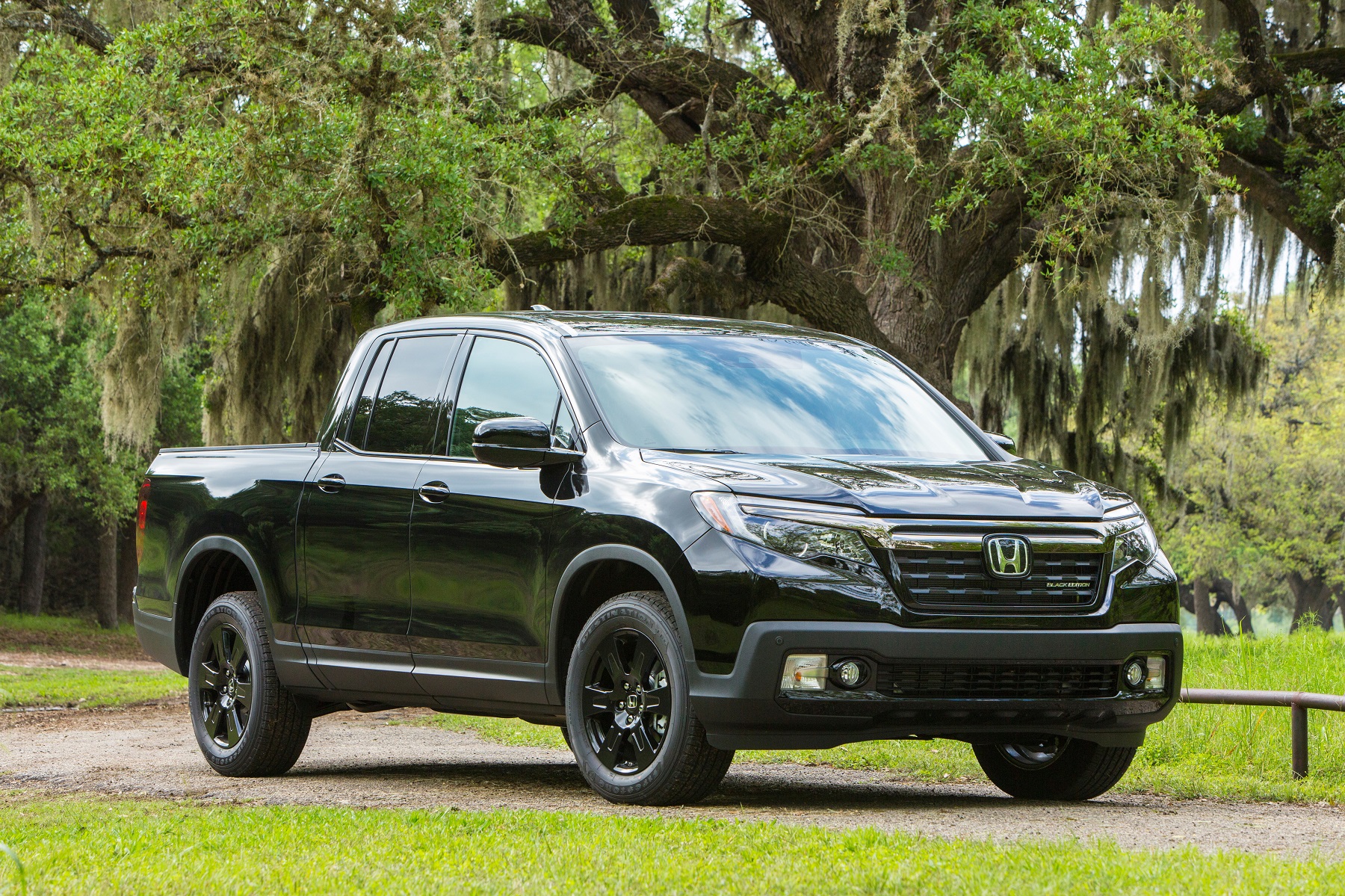 This latest Ridgeline comes in only one four-door, crew-cab form, with one bed size, one available engine, and with only one transmission offered. It is, however, available in several trims: RT, RTS, Sport, RTL, RTL-T, RTL-E, and a Black Edition, which is in essence, a gussied-up version of the RTL-E, appearing in what else? All black.

Exclusive 245/60 R18s Firestone Destination LE2 tires wrap one of three wheel designs. Buyers may choose from either front- or all-wheel drive with i-VTM4 Torque Vectoring. Base pricing ranges from $29,475 to $42,870; add a $900 destination charge for all trim levels.

Power is supplied by a transversely mounted, normally aspirated, 3.5-liter, direct injection V-6 engine with variable cylinder management, drive-by-wire throttle, and Eco-Assist system. The V-6 pumps out 280 horsepower at 6,000 rpm while developing 262 lb.-ft. of torque at 4,700 rpm and energy reaches the driving wheels through a six-speed automatic transmission. EPA mileage estimates are 18 mpg city and 25 mpg highway, and the fuel capacity is 19.5 gallons.

Visually, the new unibody Ridgeline displays a more modern aerodynamic profile while maintaining a traditional truck form with integrated spoilers at the top rear of the cab and tailgate. The hood slopes dramatically down toward the nose offering a clear view of the road surface ahead -- a big plus for off-roading. 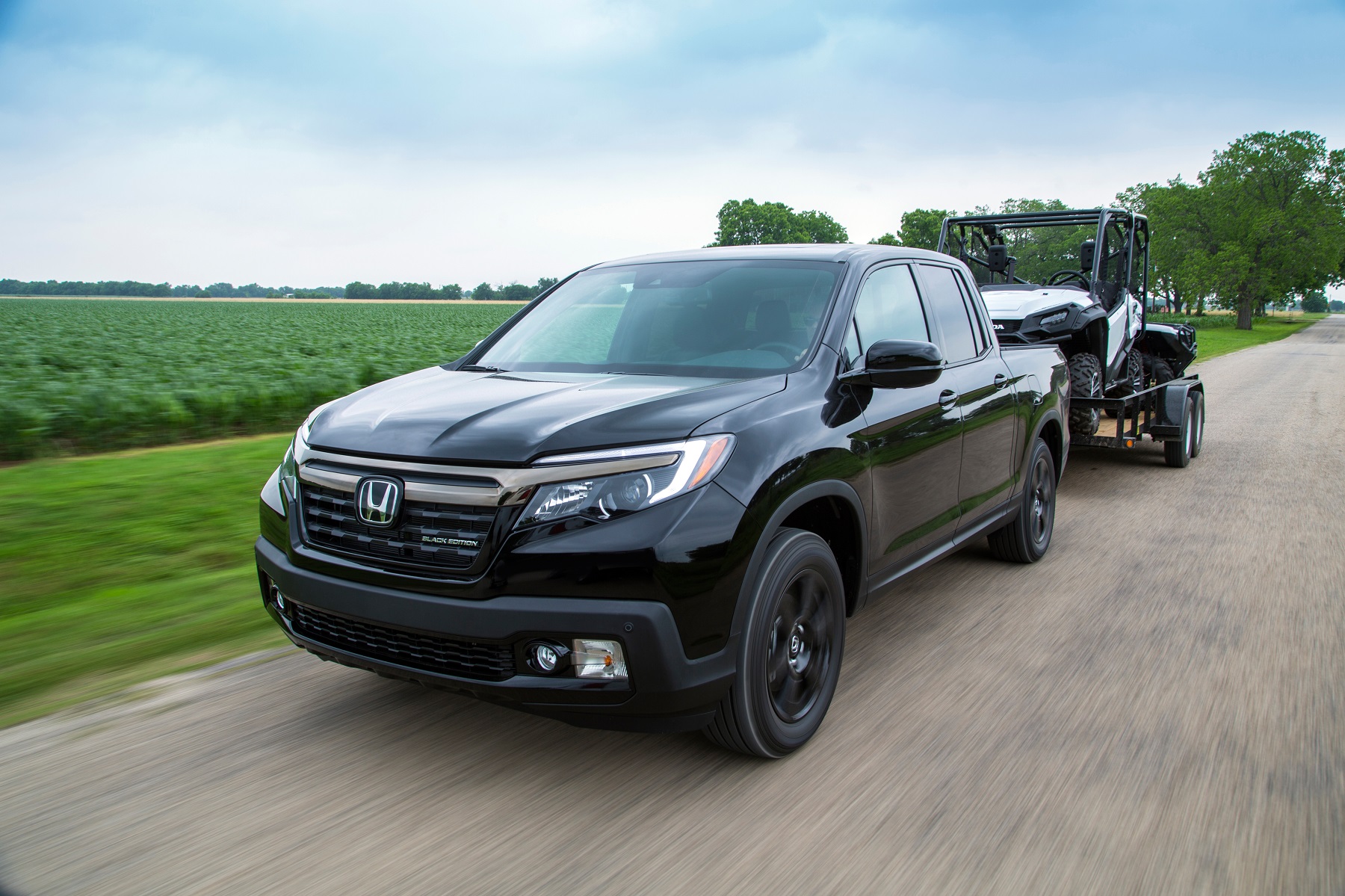 Projector beam headlamps are standard fare, with LED lamps as an option. Signature daytime running lamps and taillights are LEDs. In profile, the windshield is sharply raked aft, and a bright chrome trim surrounds the glass area of the cabin, which, with the blacked out B-pillar, gives the cab a coupe-like effect.

The Ridgeline's bed is made of a tough sheet-molded compound (plastic) that is impervious to wear and tear. Repeated loads of river rock, each weighing from 8 to 20 pounds, were dropped into the bed with no ill effect. The bed measures 5 feet 4 inches in length, 5 feet in width, and is 16 inches deep, and features tie-down hooks and an AC power outlet (up to 400 watts in upper grades or trims).

The lockable two-way tailgate folds traditionally down to offer molded-in seats, or opens out to the left for flexibility in loading and unloading. The bed's payload capacity is 1,584 pounds, and although only about 3 percent of Ridgeline owners will tow heavy loads, the towing capacity is 5,000 pounds.

An additional really cool and innovative feature is the in-bed audio system with hidden "audio exciters" rather than speakers behind the bed's side panels, where they are waterproof and protected from load damage. Sound system controls may be accessed with Apple CarPlay and Android Auto via smartphone.

My test Ridgeline was in RTL-E trim and an AWD configuration with a base price of $41,370, which came to a final total of $42,270 after factoring in the destination charge.

The 2017 Honda Ridgeline RTL-E drives and handles like a car, while possessing the ability to perform the duties of a truck. During the product launch program on the Rio Cibalo Ranch in Marion, Texas, we put it through its paces and subjected it to a variety of scenarios including freeway driving, backroad driving through Texas Hill country, towing and hauling exercises, a dynamic ride and handling course, and a challenging off-road course where it was pitted against competitive trucks in its class, out-performing them all.

Ride comfort is more car- than truck-like, and the handling characteristics border on sporty, especially on a twisty portion of the off-road course where the i-VTM4 AWD system's torque vectoring and adaptive, speed-sensitive, electronic power assisted steering came into play. The Intelligent Traction Management allowed dialing in the appropriate setting for such surface conditions as Normal, Snow, Mud, and Sand.

The 2017 Ridgeline is better looking and more capable than before, and a host of Honda accessories -- such as a custom tent and more -- are available for added convenience and versatility. What could use improvement? The rear doors would benefit from a wider opening for easier ingress and egress, manual shiftability would offer an added advantage, as would a slightly longer bed to better accommodate some ATVs (for instance, some states do not allow operation with the tailgate down). The 2017 Honda Ridgeline is a solid choice and if one could have but one vehicle, it would be ideal.