The all-new Kia Niro is an urban hybrid that serves up a bold, athletic crossover design, combined with functionality and versatility, as well as outstanding fuel economy. 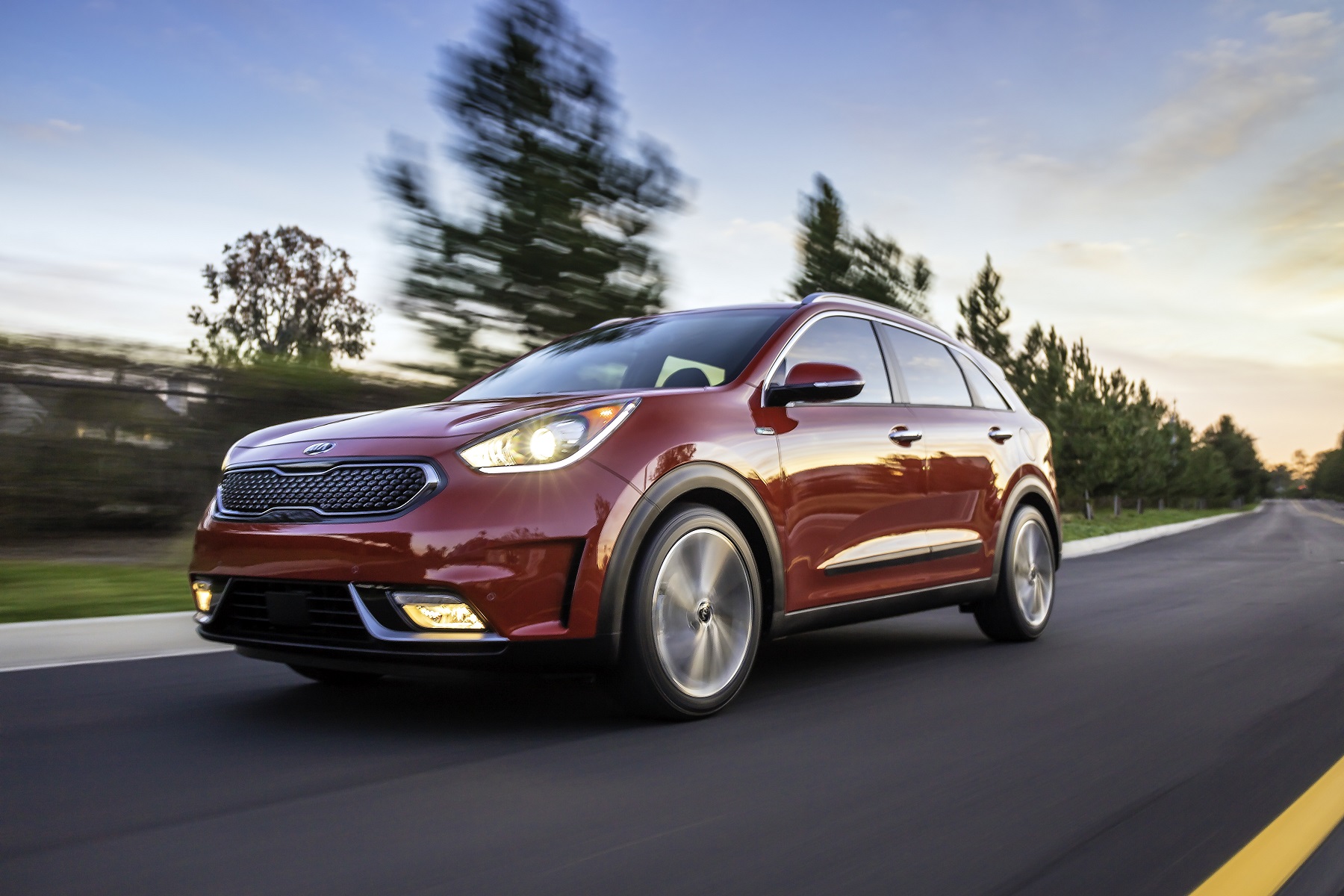 The new 2017 Niro is available in the FE, LX, EX, and Touring trim levels. The entry level FE starts at $22,890, while the top-of-the-line Touring with its impressive inventory of luxury, infotainment, and convenience features begins at $29,650. Add $895 for destination charges to all models.

The motive force for all Kia Niro models is provided by a 1.6-liter, 16-valve four-cylinder Atkinson cycle gasoline direct injection engine that delivers 104 horsepower at 5,700 rpm along with 109 lb.-ft. of torque.

The gas engine joins forces with a 240-volt AC synchronous permanent magnet motor producing 43 horsepower and 125 lb.-ft. of torque, which stores its energy in a compact and lightweight 1.56-kWh lithium-ion polymer battery located beneath the rear seat. And because the high-voltage battery is both power and energy dense, it is smaller and lighter than other hybrid batteries, allowing the engineers to downsize the gasoline engine to further maximize fuel economy and reduce emissions.

The combined hybrid system produces a total of 139 horsepower and 195 lb.-ft. of torque. Energy is geared to the front driving wheels by a six-speed dual clutch transmission with standard Sport mode to provide a dynamic and engaging -- and fuel efficient -- driving experience. 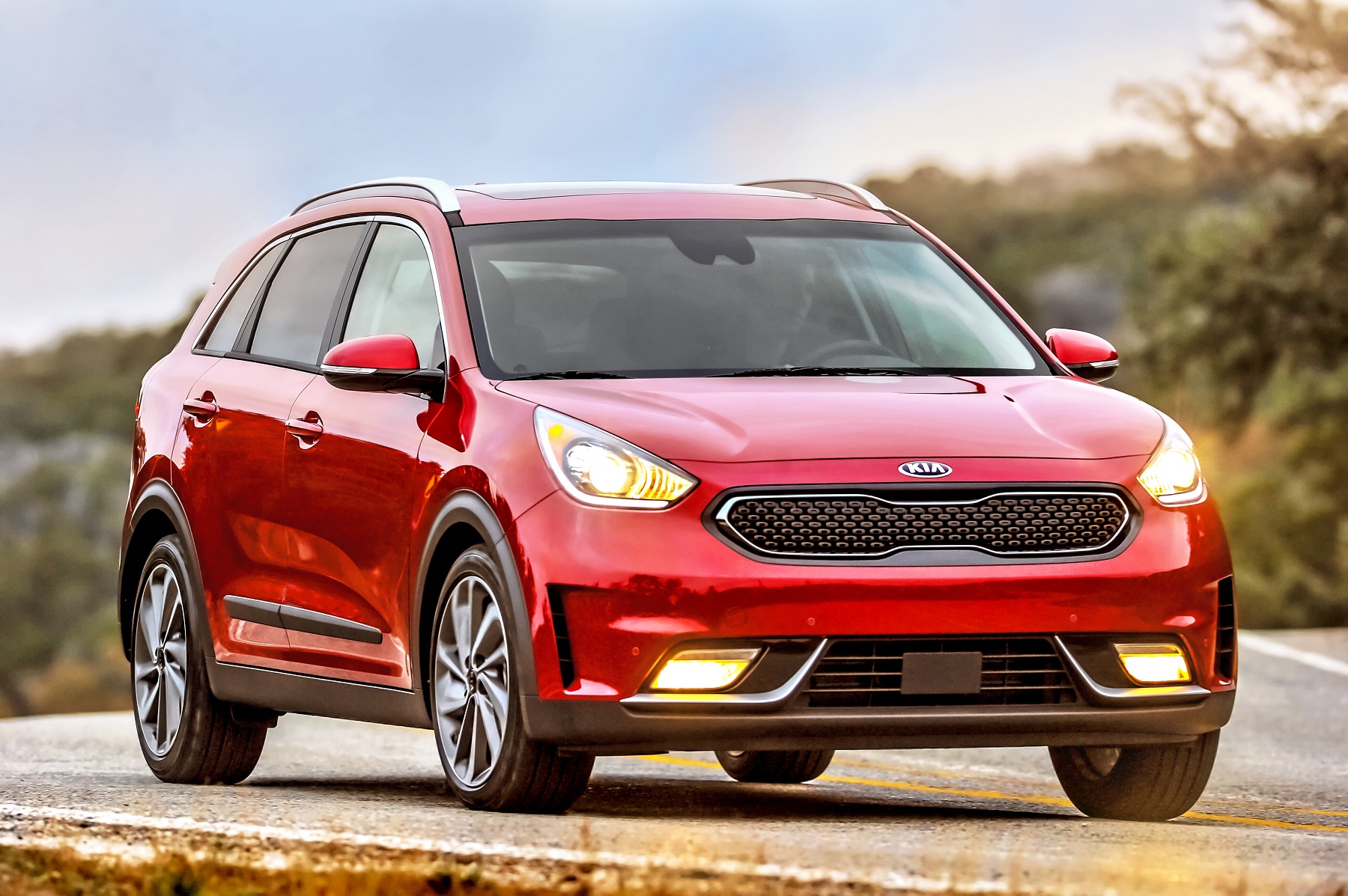 Visually, the Kia Niro is unmistakably recognizable as a member of the Kia family, with styling cues borrowed from the larger Kia Sedona and smaller Kia Soul. In many ways, it loosely resembles a reduced version of the Sedona's overall form, but with its own contemporary personality.

The Kia Niro doesn't mimic other hybrids in the marketplace: it features its own appealing design, delivering an appearance that is strong and athletic, as well as sculpted and modern.

The instrument panel is uncluttered and clean, with colorful and informative gauges at the forefront and perfectly positioned primary and secondary controls falling readily to hand. The utilization of traditionally simple, "old school" round knobs is a delight. It's well-equipped and features standard UVO3 connectivity with Apple CarPlay, Android Auto, and a 7-inch capacitive touchscreen.

Niro combines a 106.3-inch wheelbase with a wide stance and tallish body height to offer a roomy cabin with ample leg, head, and shoulder room. The packaging of the high-voltage battery underneath the rear seats assists in delivering a desirable driving experience and also increases cabin and cargo space and provides a flat load floor.

In addition to its spaciousness and comfort, ensuring a quiet interior environment was a key development focus for engineers. Noise and vibration countermeasures were employed to minimize sound invasion.

My test Niro during the press launch was a loaded Touring model with a base price of $29,650 and a final sticker of $30,545 after factoring in freight and handling charges. The exterior was sprayed Silky Silver metallic, with the interior done in charcoal and gray with blue accent stitching. I also tested a base model Niro FE, which began at $22,890 and came to a final total of $23,785; its exterior was done in Silky Silver metallic and featured a black cloth interior.

The Kia Niro serves up a very un-hybrid-like driving experience. The system is not obvious or intrusive. Acceleration comes quickly off the line and continues with a smooth delivery of power. Handling is sporty with spot-on steering feedback and instantaneous response.

Special attention was also paid to brake feel. Applying lessons learned through development of two generations of Optima Hybrids as well as the fully electric Soul EV, Kia engineers designed the Niro's regenerative system to seamlessly blend in hydraulic friction braking. Consequently, deceleration feels more consistent and linear than in most other hybrids.

An all-new Eco-Driver Assistance System features Kia's first application of Coasting Guide and Predictive Energy Control, which use the navigation system and analysis of the driver's route to improve driving efficiency. The Coasting Guide aims to maximize fuel economy by coaching the driver on when to coast and brake. Predictive Energy Control anticipates topographical changes on the road ahead while both ascending and descending to actively manage energy flow, determining when it's best to recharge the battery and when it's best to expend stored energy to optimize overall efficiency.

EPA mileage estimates for the Kia Niro Touring are 46 mpg city, 40 mpg highway, and 43 mpg combined. A plug-in hybrid powertrain will be added to the Niro's lineup later this year.

Bottom line, the 2017 Kia Niro is an eye-pleasing, compact, wagon-like, urban hybrid crossover that is not only affordable, versatile, and practical, it is also one of the most efficient hybrids available in today's marketplace.