The 2019 Jeep Cherokee gets a new turbocharged four-cylinder engine and sheds 150 pounds, both of which help improve performance and fuel economy. The Cherokee also gets new exterior styling and loses none of its legendary off-road prowess. The new Cherokee starts at $23,995 and tops out at $37,775. 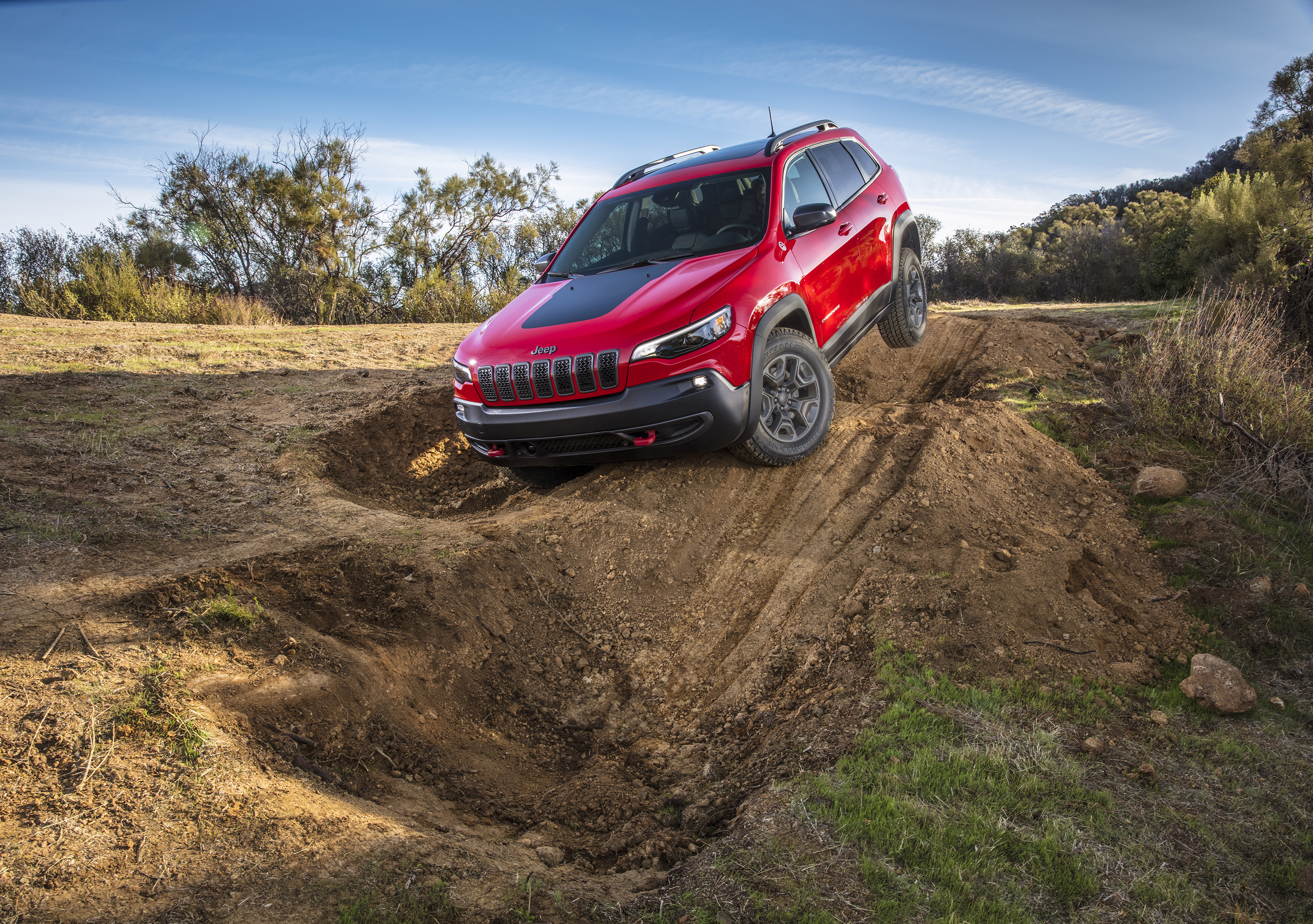 "It's a striking new appearance, but we've kept all of the Cherokee's capability," said Scott Tallon, director of the Jeep brand.

The new Cherokee is offered in five trims: Latitude, Latitude Plus, Limited, Overland, and Trailhawk. All are available in 4WD. The Trailhawk is the trail-rated version, which means the vehicle meets strict Jeep guidelines for off-road performance.

Engineers working on the 2019 Cherokee were told to change some elements, but not to sacrifice any of the vehicle's performance on or off road. "We weren't going to change the true essence of the car," said Jeep Cherokee Vehicle Line Executive Mike Downey.

New for 2019, the Cherokee has all LED headlights and fog lights, a capless fuel filler, more cargo room, and a hands-free liftgate that can be operated with a foot tap at the bottom. 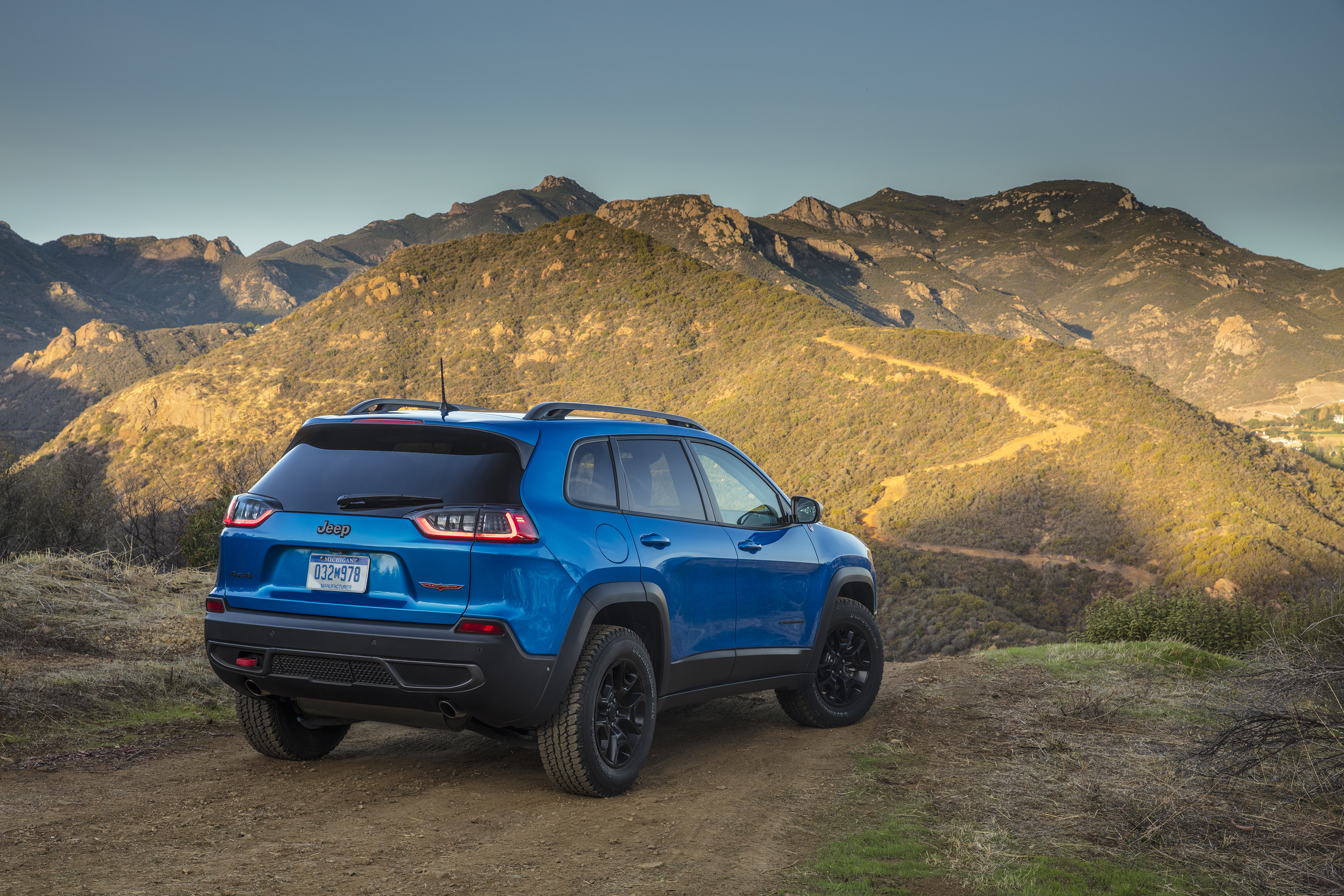 But the biggest development is the new available engine: The 2.0-liter direct-injection turbocharged four-cylinder develops 270 horsepower and an impressive 295 lb.-ft. of torque, giving the Cherokee the "fuel efficiency of a four-cylinder with the power of a six-cylinder," Downey said.

The standard engine in the Cherokee is a 2.4-liter naturally aspirated Tigershark engine that delivers 180 horsepower and 170 lb.-ft. of torque. A 3.2-liter Pentastar V-6 that kicks out 271 horses and 239 lb.-ft. of torque is also available. The engines are mated to a nine-speed automatic transmission.

Jeep keeps its off-road drive systems -- Active Drive I, Active Drive II, and Active drive with lockers -- as well as a neutral position for flat towing. Jeep's Selec-Terrain traction control system also remains with five settings for auto, snow, sport, sand/mud, and rock. Selec-Terrain also includes Selec-Speed Control with hill-descent control, both of which are like cruise control for off-roading.

The Trailhawk model delivers unmatched 4x4 capability with a 29.9-degree approach angle, a 22.9-degree breakover angle, and a 32.2-degree departure angle. The Trailhawk can ford water up to 20 inches deep and can tow up to 4,500 pounds. 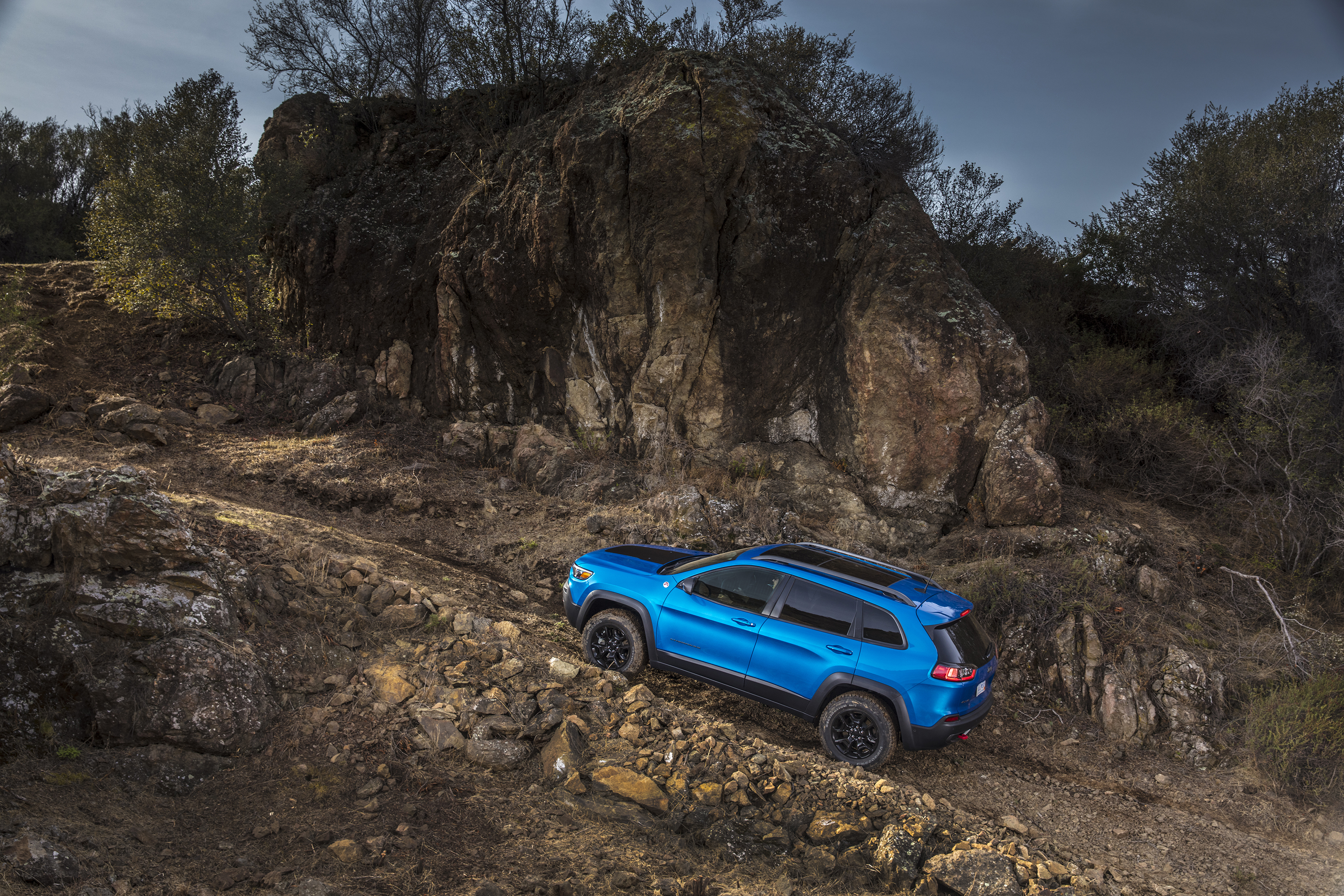 Inside the cabin, the Cherokee gets the fourth-generation Uconnect infotainment system, which supports Apple CarPlay and Android Auto. Uconnect is one of the most intuitive connectivity systems on the market today, with crisp and clear graphics on either a 7- or 8.4-inch touchscreen. The larger touchscreens offer pinch, tap, and swipe capability.

During my test drive in a 4WD Latitude Plus with the new 2.0-liter turbo engine, the Cherokee demonstrated spirited acceleration and surefootedness in the twisting mountain roads outside of Los Angeles. The vehicle remained relatively flat when diving into sharp curves and had precise, linear steering.

The previous generation of the Jeep Cherokee has done very well since it replaced the Jeep Liberty, tripling its market share. Jeep is looking for the new Cherokee to build on that progress, and from initial appearances, it should.