Unless you are an engineer or serious tuner addict, you probably haven't heard of the air-powered engine from the Scuderi Group. 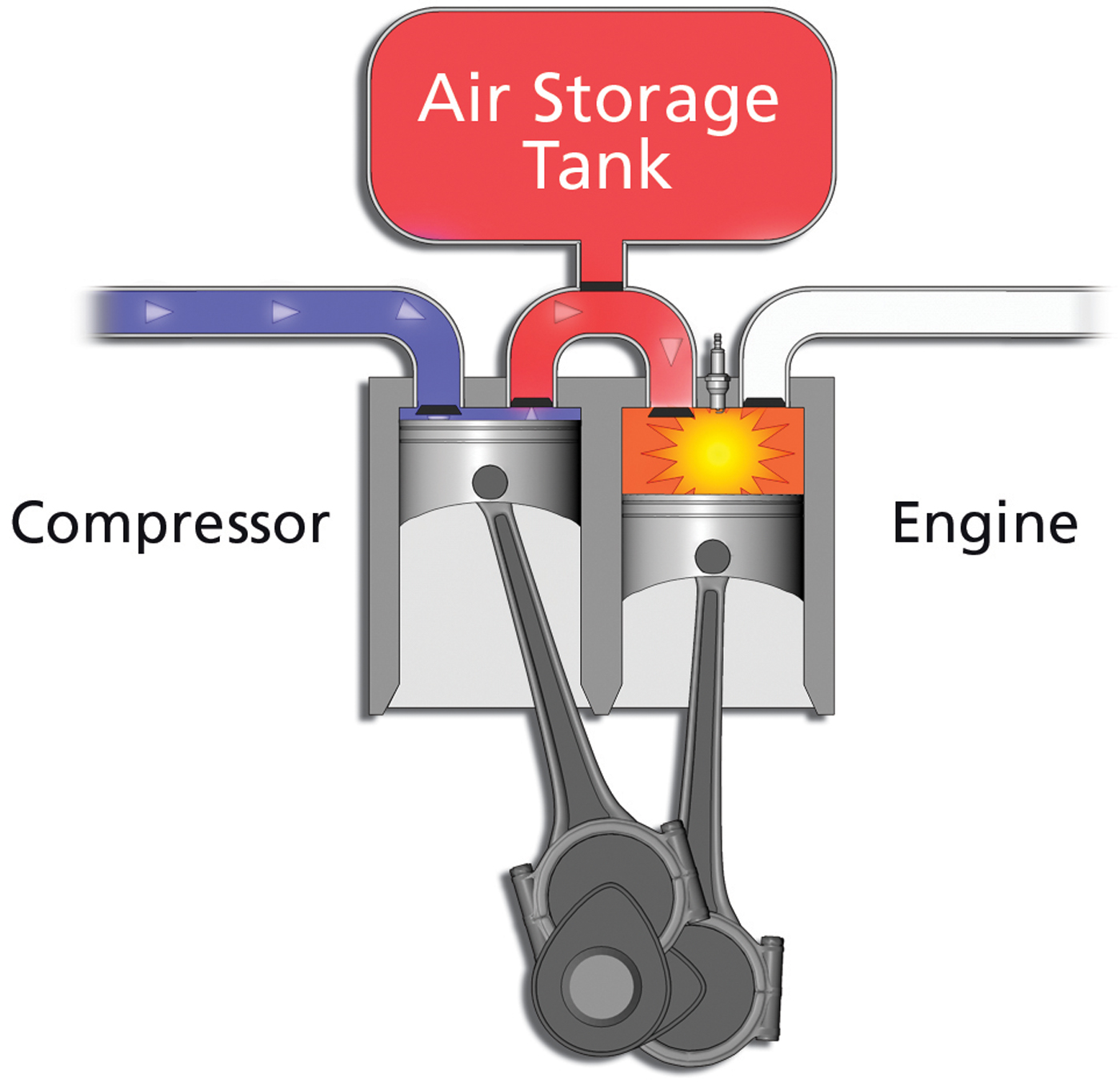 The Scuderi Air Hybrid Engine uses oxygen to supplement the combustion process, which improves its overall efficiency, squeezing up to 50 percent more power, torque and mileage out of the engine's other source of fuel: gasoline. And since air is the primary fuel, the engine runs cleaner than even the squeakiest clean of today's partial zero emissions gas engines. Scuderi claims its revolutionary design can reduce nitrogen oxide (NOx) emissions by 80 percent.

So what's the secret?

Despite a century plus of tinkering, today's engine is much the same as the four-stroke Otto cycle design developed by Nicolaus Otto, Gottlieb Daimler and Rudolph Diesel in 1887. The four strokes refer to intake, compression, combustion (power), and exhaust strokes as the pistons churn up and down at lightning speed. The four-stroke engine has the pistons working in unison -- all together up, all together down.

The Scuderi engine uses a "split cycle," meaning half the cylinders are sucking in air while the other half are firing, so there is no more waiting -- even a milli-second worth of waiting -- for your 4, 6 or 8 cylinders to recycle and re-ignite. That sounds more efficient to me, and I'm not an expert in thermodynamics and fluid mechanics like the military aircraft engineer who designed this engine, the late Carmello Scuderi (1925-2002). 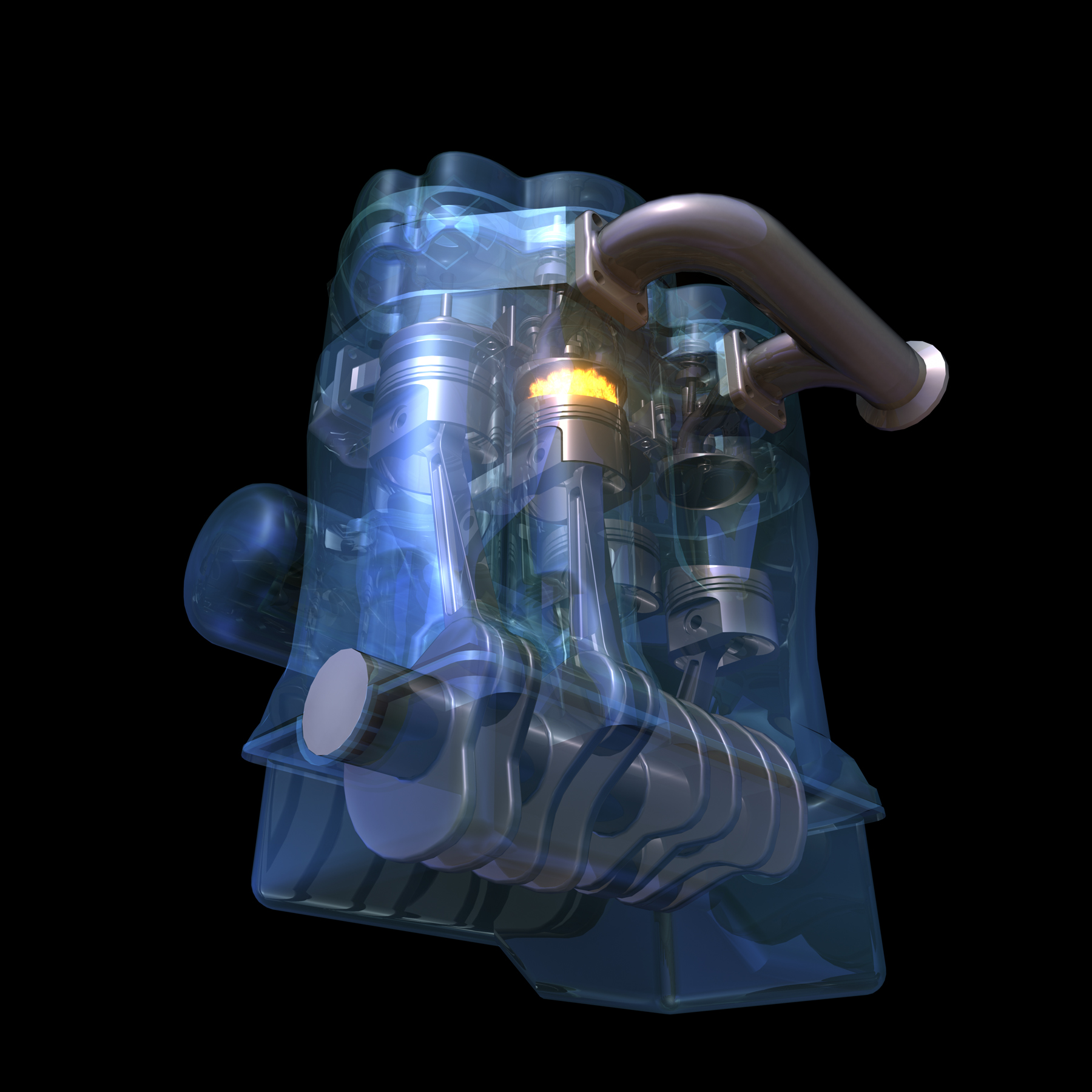 The century-old Otto-Daimler-Diesel design also has pistons firing at the very split second they reach the top of their cylinder chambers. The Scuderi engine fires them a blink after what's called "top dead center," four times faster than conventional engines, and pushes the super-heated air into a tank, which Carmello's son, Sal, described to me as a value-added extra.

This compressed air can be used, "the same way hybrids store battery power for regenerative braking and driving at low speeds up to 10 or 20 miles per hour." That reduces even further the amount of fuel needed to power the engine, and maybe even the need for the electric motor entirely, which will reduce both vehicle weight and its cost.

Another feature of the Scuderi design is that it can work with any non-air fuel: gas, diesel, ethanol or methane. "It's not fuel specific," Scuderi said, part of why manufacturers including Daimler, Fiat, Peugeot Citroen, Honda, Ford and Bosch reportedly are interested. Scuderi, based in West Springfield, Mass., has an office in Frankfurt and plans to open one in Japan to turbo-charge that interest.

Ah, yes, turbo-charging. Sal told me all that does is push more fuel into the chambers for more power, but it doesn't make the engine more efficient. The Scuderi engine potentially can double the power of an existing engine without turbo-charging. That means engines can be smaller, so cars can be lighter, further adding efficiency and reducing emissions.

Sal Scuderi says, "We can generate 40 percent more power out of our four-cylinder engine." Plus, it's 40 percent smaller and lighter than what he describes as "theirs". "Our engine can be in a car in 2012 without changing the car's design," he told me -- that's if he can convince carmakers to switch from something they've been using since 1887.

The Scuderi engine has been undergoing tests at Southwest Research Institute, an independent testing facility in San Antonio, Texas, which also conducts tests for NASA, and things look pretty promising. How appropriate in this 40th anniversary year of the Apollo moon landing that there's a viable new propulsion system for our four-wheel vehicles designed by an aeronautical engineer.

To listen to a podcast of the Scuderi Air Hybrid Engine visit scuderiengine.com.