Racing fans probably have not noticed it from the grandstands, but Indy cars are turning green. Not their colors, but their engines, which are now fueled by ethanol. And there's even a hybrid racecar.

The racetrack version of E85 is not the normal corn-based ethanol that flex-fuel models, such as GM's Chevy Tahoe sport utility vehicle and Buick Lucerne sedan can use. This is next-generation E85, a cellulosic ethanol made from wood waste that supporters hope can replace up to one-third of our fossil fuels by 2030, which also would significantly reduce CO2 emissions.

A statement from the Indy Racing League says, "the message shared by the ethanol industry and Indy Car Series was that ethanol not only was an ideal solution for high-performance Indy Car Series cars, but that consumers can expect improved performance and environmental benefits as well with ethanol-enriched fuel."

In July, I attended the Rexall Edmonton Indy in Canada, where all cars ran on 100 percent fuel-grade ethanol, which is 100 percent free of carbon emissions. George Klotz, team manager for Andretti Green Racing, told me he has noticed no performance difference between the racing-grade fossil fuel Indy used to use and the new cellulosic ethanol. The winner, Will Power, driving for the Penske Racing Team, clocked an average speed of 109.498 mph on the fossil-free fuel. 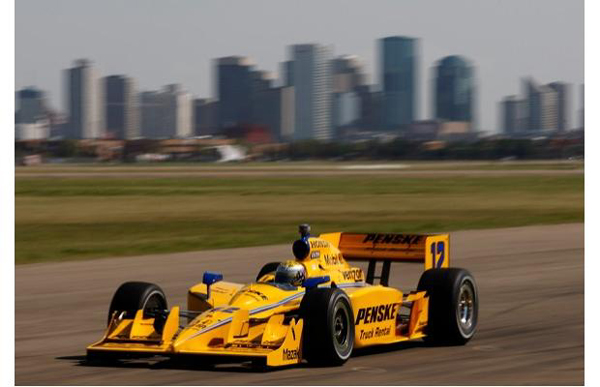 The American Le Mans racing program is actually testing the green E10 fuel, via the Michelin Green X Challenge, a revolutionary competition that grades manufacturers and teams on their overall performance and fuel efficiency at each race.

I'm both surprised and disappointed that the only hybrid racecar in the series is number six on the overall performance list, behind three open wheelers running on E10 and two diesels. The hybrid is a Corsa Motorsports Ginetta-Zytek 09HS, powered by a hunky 4.0-liter engine and a 140-volt lithium-ion battery, which captures energy normally lost to heat during braking, to power an electric motor.

This heat-capture technology is called Kinetic Energy Recovery System. It is similar to the hybrid configuration on prototype Formula One racecars, but different than the hybrid systems used in passenger hybrids such as the Prius. KERS also is next-generation technology that may start trickling down from the racetrack to the supermarket parking lot within the next few years. Ditto the lithium-ion batteries, which are far more expensive than the more conventional nickel metal hydride batteries used in most passenger hybrids. Mercedes-Benz is using similar lithium-ions to power its first hybrid passenger car, the S400 luxury sedan, being introduced this fall as a 2010 model.

The hybrid Corsa has been racking up some impressive racetrack finishes, including fourth in Salt Lake City and third at Lime Rock, Conn. The Corsa is able to drive at speeds up to 75 mph on its electric drive only, which also has some promise for "real life" hybrids.

A good deal of passenger car technology gets to our driveways from the racetrack, including traction control and carbon fiber brakes. So, too, will cellulosic ethanol and 75-mph all-electric car motors perhaps end up in consumer production cars.