The newest car manufacturing plant in the U.S. is also one of the oldest. It's taken two years and $550 million to transform Ford's sprawling Michigan Assembly Plant, just outside of Detroit, from churning out gas-guzzling Lincoln Navigators and Ford Expeditions into a lean, green production machine for Ford's new focus on small, fuel efficient cars. 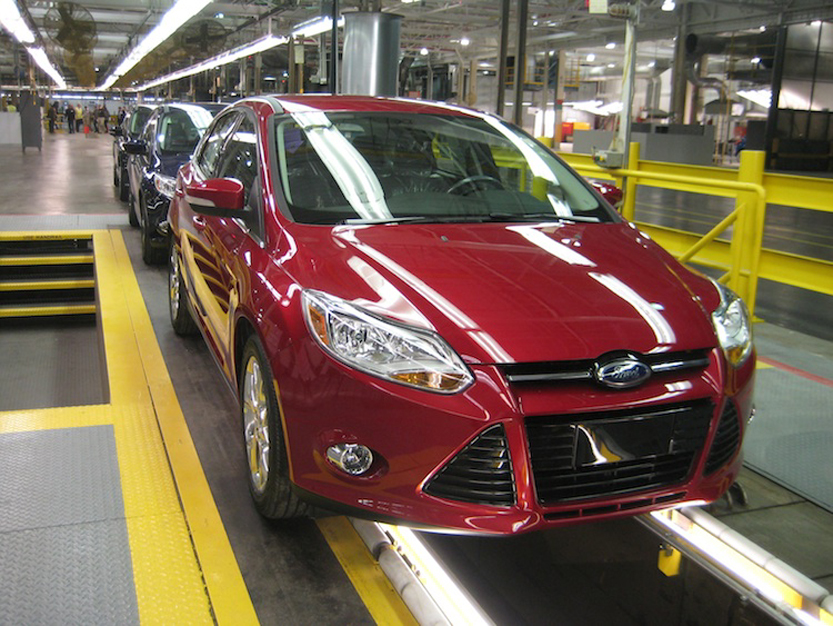 I was part of a group of journalists invited to tour the refurbished factory last month, and it is impressive, indeed. The new MAP is the world's first factory able to produce fuel-efficient gas-powered cars on the same production line with next-generation hybrids, plug-in hybrids and all-electric cars.

All these vehicles are variations of the Ford Focus, built on the company's global "C"-segment chassis. That helps lower costs, because many parts are the same no matter what the propulsion system, or whether the cars are built in Michigan, Germany or China.

The first Focus models to roll off the assembly line are traditional gas-powered models. The new Focus Electric zero-emission battery electric version goes into production late in 2011, followed by an all-new hybrid and an extended range plug-in hybrid in 2012.

More than 25 percent of new vehicles sold today are small cars, like the Focus and Ford's similarly small and popular Fiesta. Mark Fields, Ford president for the Americas, told me these models are bringing new customers to Ford, especially first-time buyers in the important 18-24 age group.

Ford is banking on the Focus, the best-selling small car in Europe. It is one of the most fuel-efficient cars on the road, with a 40-mpg highway rating. That's better than its competitors in this segment, the Chevrolet Cruze, Audi A3, Honda Civic and Toyota Corolla. And the hybrid and extended range plug-in hybrid versions will get closer to 60 mpg. By comparison, the Ford Fusion Hybrid is rated as the most fuel-efficient midsize sedan, with 41 mpg city, which is better than the Toyota Camry Hybrid.

The factory is 1.2 million square feet, the size of 22 football fields, and that doesn't include the paint shop in a separate, adjoining building. From start to finish, vehicles travel more than 3 miles inside the MAP, attended to by more than 3,200 employees.

Everything is computerized, of course, so parts arrive when and where they are needed in the complex production choreography. Most parts have barcodes, which are scanned and matched to the vehicle snaking its way through the line.

I watched several of the quality and safety tests done on every vehicle, like the so-called soak test, in which 100 nozzles spray high pressure water on different parts of the vehicle for three minutes, to test for water leaks. Ten cars are pulled out of the line at random each day for a 20-minute soak test. Workers strip the seals from the windows and remove the carpets, and sit inside with flashlights, checking for problems. If they find one, the line shuts down until the problem is fixed.

All the water used in these soak tests is re-used, which fits with Ford's design to make this a green factory producing green cars. The factory also is installing Michigan's largest solar power generation system, a 500-kilowatt system that will produce much of the energy needed for production.

The solar system is integrated with an energy storage facility that can store 2 million watt-hours of energy, which is enough to power 100 average Michigan homes for one year. The solar/storage system is expected to save more than $160,000 in energy costs a year. Now that's real green!