Car sharing is nothing new. Companies like Zipcar have been offering low-cost alternatives to renting or owning on college campuses and cities for several years. 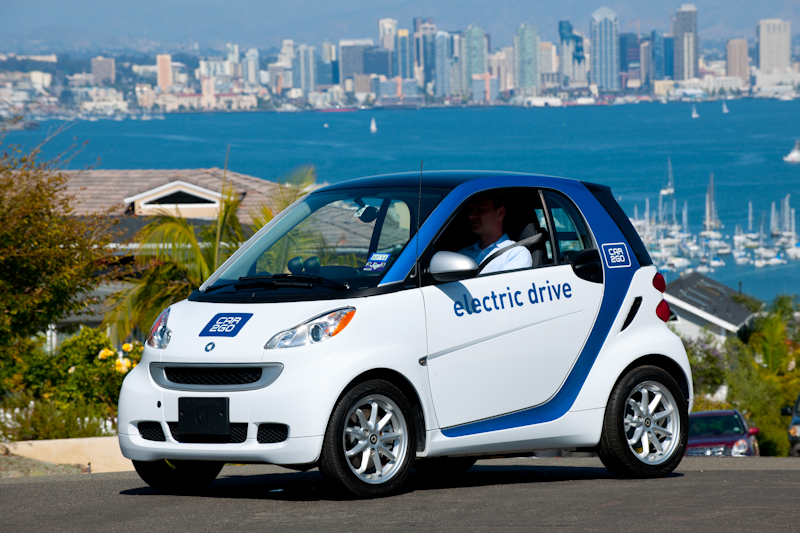 What's new is the Car2go program in San Diego, Calif., uses only plug-in Electric Vehicle cars from Smart. It's a partnership between Daimler (parent company of Smart), the city, local utility, and ECOtality, which manufactures charging stations.

The city of San Diego is the world's first EV-only car sharing program, and will have a fleet of 300 electric cars when it is fully operational early next year. I was one of a group of journalists invited to attend the launch and test-drive in July.

San Diego Mayor Jerry Sanders told us the city will set aside specific parking spots downtown for Car2go EV Smart cars, many with charging stations. Since Car2go pays for the electricity, these stations can be accessed only by car sharing members. 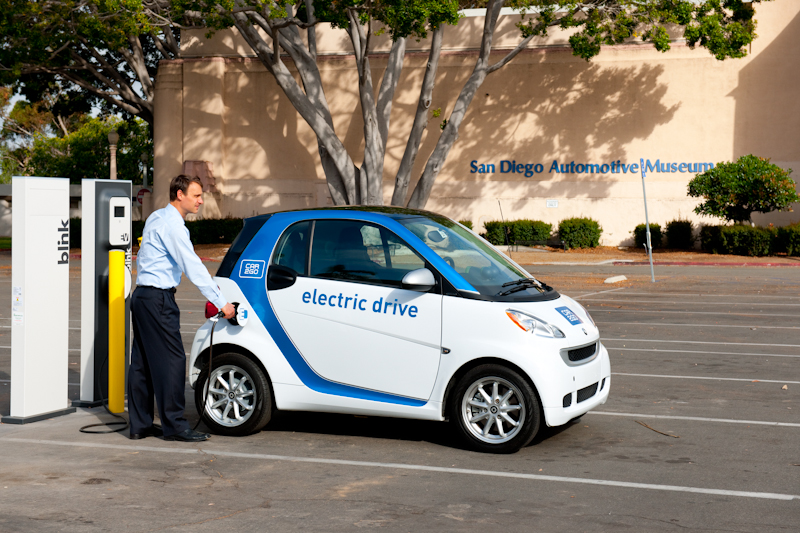 The city plans to install more than 1,000 charging stations for all the plug-in cars expected that its eco-friendly residents will be buying in coming years. Already, there are estimates that 10 percent of the sales of Nissan Leaf zero-emission electric cars are sold in San Diego. "We want to be ground zero for the electric car movement," Mayor Sanders said to me.

ECOtality president/CEO Jonathan Read informed me the public chargers will have both 220-volt and 110-volt capability -- the slower one for overnight charging. The company also manufactures wall-mounted units for home garages.

Car2go president Nick Cole says the EV Smart cars will be concentrated in the downtown area, so there's never more than a five minute walk to the nearest one, and members can choose a car with more or less battery reserve, depending on their need.

If the battery is low at the end of a sharing session, a user can simply park it at the most convenient spot, or at a charging station, and plug it in to get credit on future sharing uses.

The Smart car's electric drive has an 84-mile range. Cole said that since most sharing is one hour or less and users travel one mile or less, he expects the plug-in Smarts to go several days without needing recharging. And if there's a problem, then each vehicle is equipped with an SOS call button, with live assistance on the other end ready to help.

Car2go members get a membership card with a barcode. When you scan that on the special windshield panel, the doors unlock. Inside, you use the card again to unlock the little glovebox, which holds the keys. At the end of the share, you reverse the process. The same barcode membership card unlocks the electric charging station.

At the end of the rental, the dashboard navigation screen pops up a series of questions, including one about the vehicle's cleanliness. If it's rated as dirty, then the computer takes the vehicle out of service until it is cleaned.

Car2go is offering free membership in San Diego to help launch the EV program. Later, it will be a $35 fee to join. Vehicle usage costs 35 cents a minute, including insurance and electricity.

Car2go's Cole said the plan is to add Smart electric drives to its gas-operated fleets in other cities, and add attract new client cities with a mix of gas and electric models. The next city is expected to be Amsterdam, Holland, most likely with zero-emission EV models, which are more friendly to that city's famous bicycle riders. There are 40,000 Car2go members worldwide.