Mission Possible: BMW i3 and i8 Concepts to Reality

Two new standout concept cars are futuristic looking all-electric models from BMW, with barely a hint of chrome, except on the tire rims. 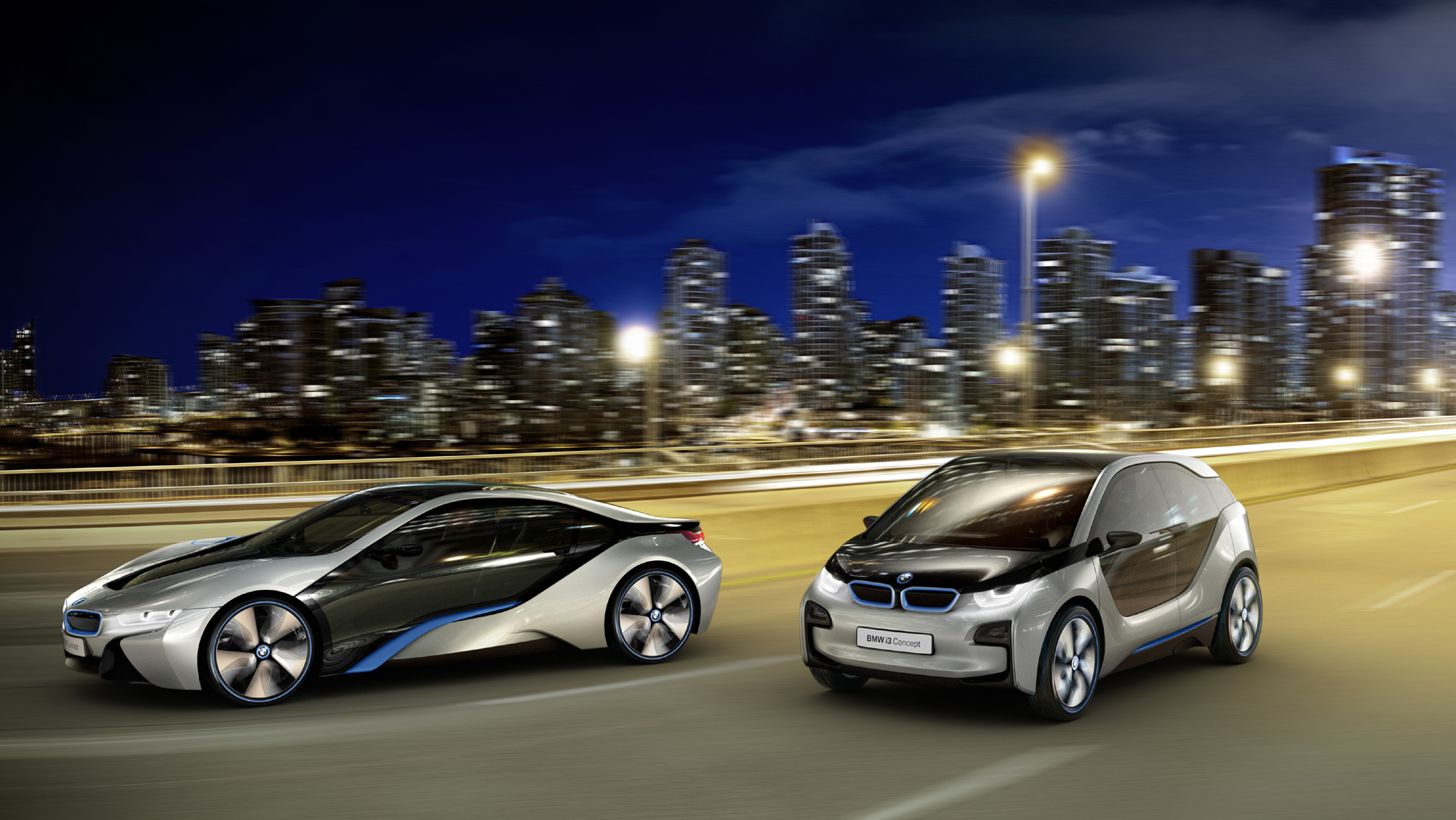 The BMW i3 city-sized compact and the larger BMW i8 sedan are constructed mostly of super light, super strong carbon fiber, which is 50 percent lighter than steel. Carbon fiber is also 50 times more expensive than steel, which explains why it's been used only on Formula One racecars, some super-expensive sports and in the aviation industry.

Both BMW i3 and i8 concepts are built on a lightweight aluminum chassis and topped with a carbon fiber shell, which BMW calls a "life module." The aluminum and carbon construction cuts as much as 650 pounds from vehicle weight, offsetting the added weight of the lithium ion batteries to power them.

The carbon fiber is strong enough to allow the i8 concept car to feature swing-up gullwing-style doors, connected to the frame by literally a thread. BMW has partnered with a German-based SGL Carbon to manufacture the high-tech material both in the U.S. and Germany. The interior is open and airy, with what BMW describes as a "lounge-style ambiance."

Even though the vehicles are still a couple of years away from the street, a pre-production model of the i8 concept is a guest star in the new "Mission Impossible 4 -- Ghost Protocol" action movie. You'll see it parked at the entrance of the over-the-top ship-shaped five-star Burj Al Arab resort hotel in Dubai. But since this i8 is too valuable for movie chase scenes, those feature a 2012 BMW 6 Series sedan. 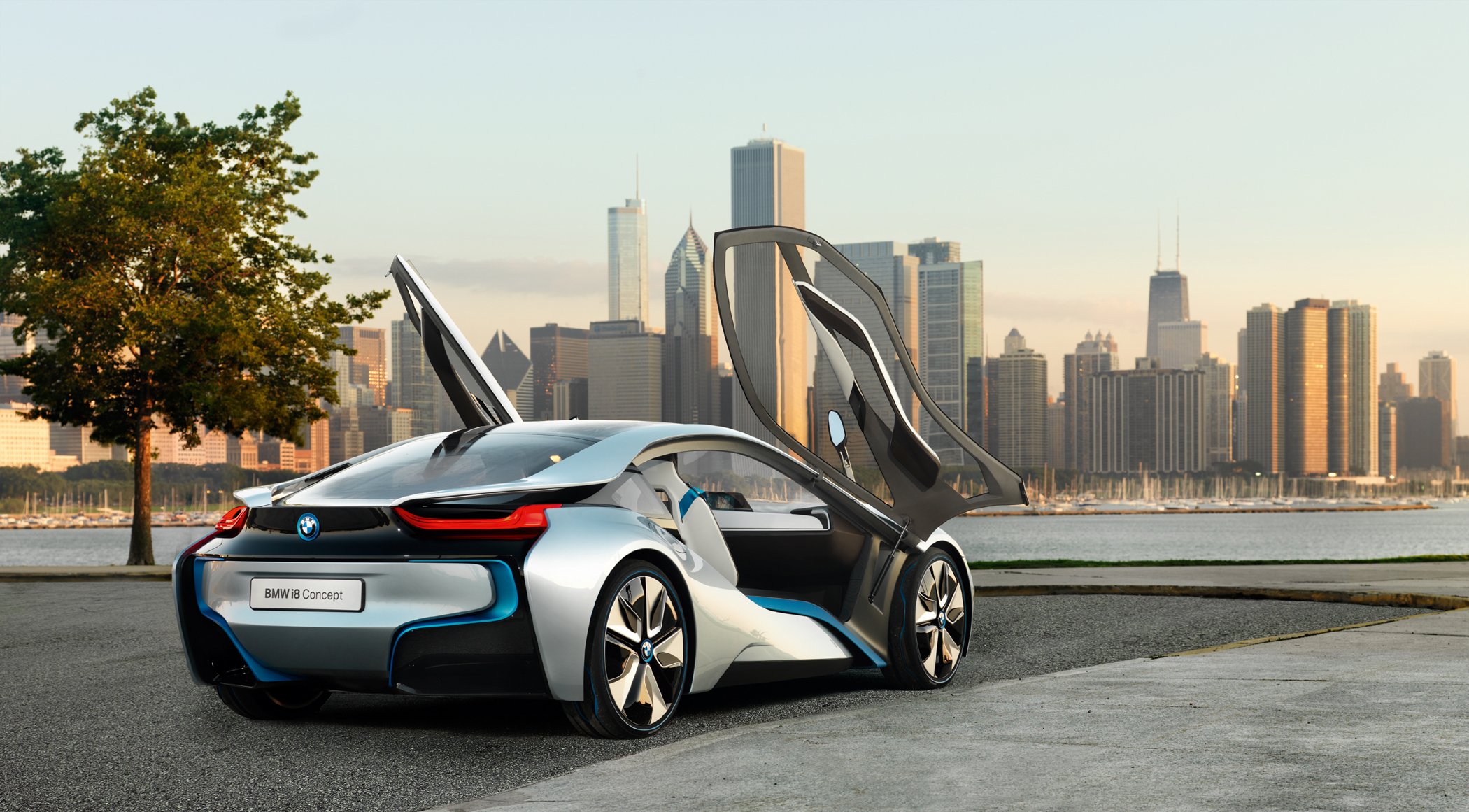 BMW's Henrik Wenders told me both vehicles have a "perfect 50-50 weight distribution and a low center of gravity," so drive dynamics will match that of conventional gas and diesel Beemers, including acceleration.

The smaller i3 city car is a pure electric vehicle, with a 125-kW motor over the rear axle that can accelerate the vehicle from 0-to-37 mph in under 4 seconds, and to 62 mph in less than 8 seconds. The i3 will have a top speed of 93 mph.

The BMW i8 is a plug-in gas-electric hybrid with a unique powerplant design. A turbocharged three-cylinder engine producing 163 horsepower powers the rear axle, and a 164 kW motor powers the front. BMW says the i8 can travel about 20 miles on electric power alone, which BMW calls eDrive. Acceleration is 0-to-60 mph in less than 5 seconds. This is similar to the high performance M3 sports car that has a top speed of 155 mph. And, the i8 will recharge fully in less than 2 hours.

Despite the size and power differences, both of these four-passenger concept cars have a driving range of up to 100 miles between charges. Wenders told me BMW is considering an extended-range version of the larger i8. In a nod to the past, both have bench-style seating in the front and rear seats.

The i3, introduced previously as the BMW Megacity Vehicle, is scheduled to be available at the end of 2013, followed by the i8 in 2014. There's no word yet on how much these vehicles might cost, either to buy or lease. They are both part of BMW's Vision Dynamics program, focusing on sustainable mobility (mostly plug-in electric and plug-in hybrid electric). BMW owns and manufactures the Mini Cooper brand, including the electric version, the e-Mini.

SGL's new carbon fiber production plant in Moses Lake, Wash., became operational just this past summer. It is powered completely by renewable hydroelectric power. However, the carbon fiber for the i3 and i8 cars will be produced in Germany, close to BMW's production facility in Leipzig. This newly expanded and updated assembly line also is powered by renewable energy.