Ford is the first auto company in North America to use the sophisticated heat-seeking cameras during both design and manufacturing. When police and the military use thermal imaging, it's done so to spot the bad guys. When Ford engineers use it, they're looking for microscopic air leaks that could cause noise during driving. 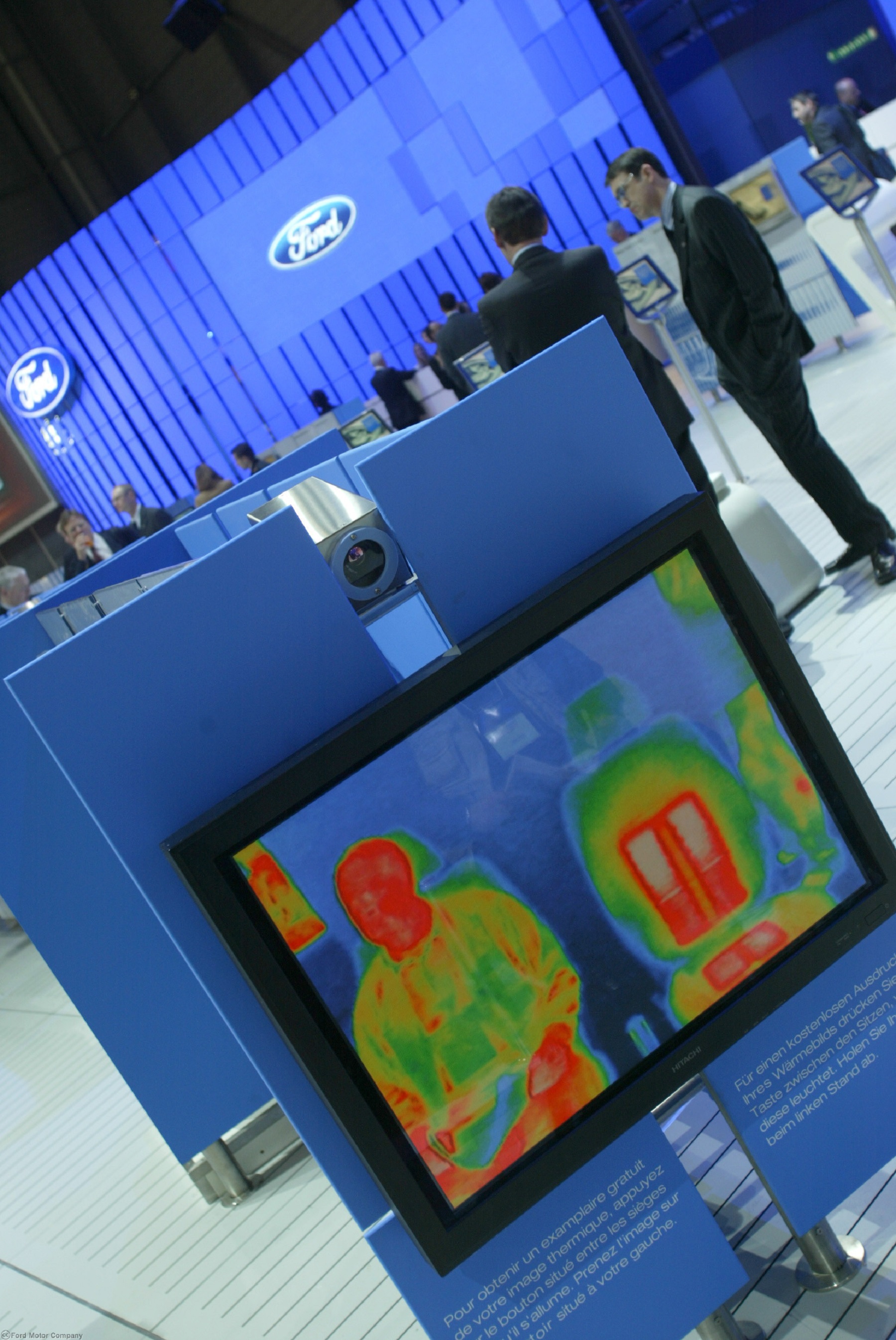 Manufacturer photo: Ford engineers are pioneering thermal imaging technology -- similar to what law enforcement agents use to track down criminals -- to find and eliminate air leaks in vehicle cabins

Thermal imaging technology allows police and the military to see through bushes and into dark alleys, as the cameras picks up body heat that shows where a suspect is hiding. Firefighters use it to look through smoke and debris to find people who have passed out from smoke inhalation, or perhaps a frightened child hiding under a bed or inside a closet. At Ford, engineers create virtual body heat by pumping hot air into the vehicle, so they can see the cooler spots that tell them there's a leak.

I watched a demonstration recently at Ford's Dearborn Development Center research facility as an engineer waved a camera back and forth over the driver side door panel at a distance of about 6 feet away from the vehicle. The camera, slightly larger than a point-and-shoot, is connected to a large flat video screen, which shows the image in psychedelic reds, oranges, blues and purples. It's also connected to a computer that's recording the data.

The demonstration showed a hot spot in the middle of the door. It was a small screw to hold the door panel in place, which had been removed to show me how the system works. In the real world, a leak in the dashboard, for example, would allow engine noise into the cabin. A leak in the glass liner of a moon roof could make it sound like it was still open when it was closed.

This is important stuff, since buyers and owners rate interior quietness as one of the most important aspects of customer satisfaction. Data from Ford show the 2013 Ford Fusion earned a 67 percent approval rating for interior quietness compared to 58 percent for the 2012 Toyota Camry.

The thermal cameras were put into service last year, and are used both during the design process and for spot checks on the assembly line. They can spot tiny holes and openings that previous methods can miss, so designers and engineers can change the design or insulation materials.

In addition to moon roofs, vulnerable spots for air leaks include window glass, door trim, trunk lids and liftgates and the base of the windshield, including where the wipers attach. In addition to reducing noise, sealing such leaks makes heating and cooling more efficient by reducing energy loss. That's similar to how sealing a home prevents wasted energy. Home or car, energy efficiency means saving money on fuel.

The windows on Ford's demonstration vehicle were blacked out for additional accuracy. Thermal imaging is different than night vision, which needs some ambient light to work. Mercedes-Benz, BMW and Audi offer night vision package options on their larger, more expensive models, to help drivers identify a pedestrian, cyclist, deer or other animal on an otherwise dark road.

I also visited the Rapid Prototype Lab, where huge 3D printing machines create parts for new vehicles in research and development, and changes to current models, including engines. It can take up to 36 hours to 3D print something as large as an engine block, which requires as much as 800,000 microscopic layers of composite. 3D printing allows designers to move from a 2D sketch to a 3D prototype in less time and with more precision than by traditional methods.