The VW Bus is Back -- and It's Electric

It's official. Volkswagen is bringing back the beloved and iconic Microbus as an electric vehicle in 2022. The announcement of the new I.D. BUZZ was made during the Pebble Beach Concours d'Elegance, one of the world's most prestigious auto events.

This recent announcement comes two years after VW first began showing that was then called the Budd-E concept at car shows, to great reviews by both auto journalists and the public. Unfortunately, its debut was just as "Dieselgate" hit the headlines, with charges that VW manipulated onboard software so its diesels would appear to get better mileage and fewer emissions.

The scandal, which spread to VW brands Audi and Porsche, was costly to the company, nearing $5 billion (yes, billion) in fines, as well as initiatives to promote zero emission vehicles in the U.S. Additionally, it was expensive for VW to either fix or buy back 475,000 2.0L TDI diesel vehicles.

Now that Volkswagen is back on its feet with new management, the focus can turn to introducing new models that are not diesels. The smartest choice VW could make was to start with the beloved and iconic Microbus, which Volkswagen stopped selling in the U.S. in 2003. VW has been talking on and off ever since about bringing out a new model.

I have fond memories from many years ago of driving one around Europe, North Africa, and the Middle East after college, in one of those once-in-a-lifetime trips before "real life" began. I slept in it, cooked in it, climbed on top of it for photo vantage points, even shipped it back home to New York City because I couldn't bear to part with it. But I sold it soon after, because it clearly was unhappy with life in a big city. 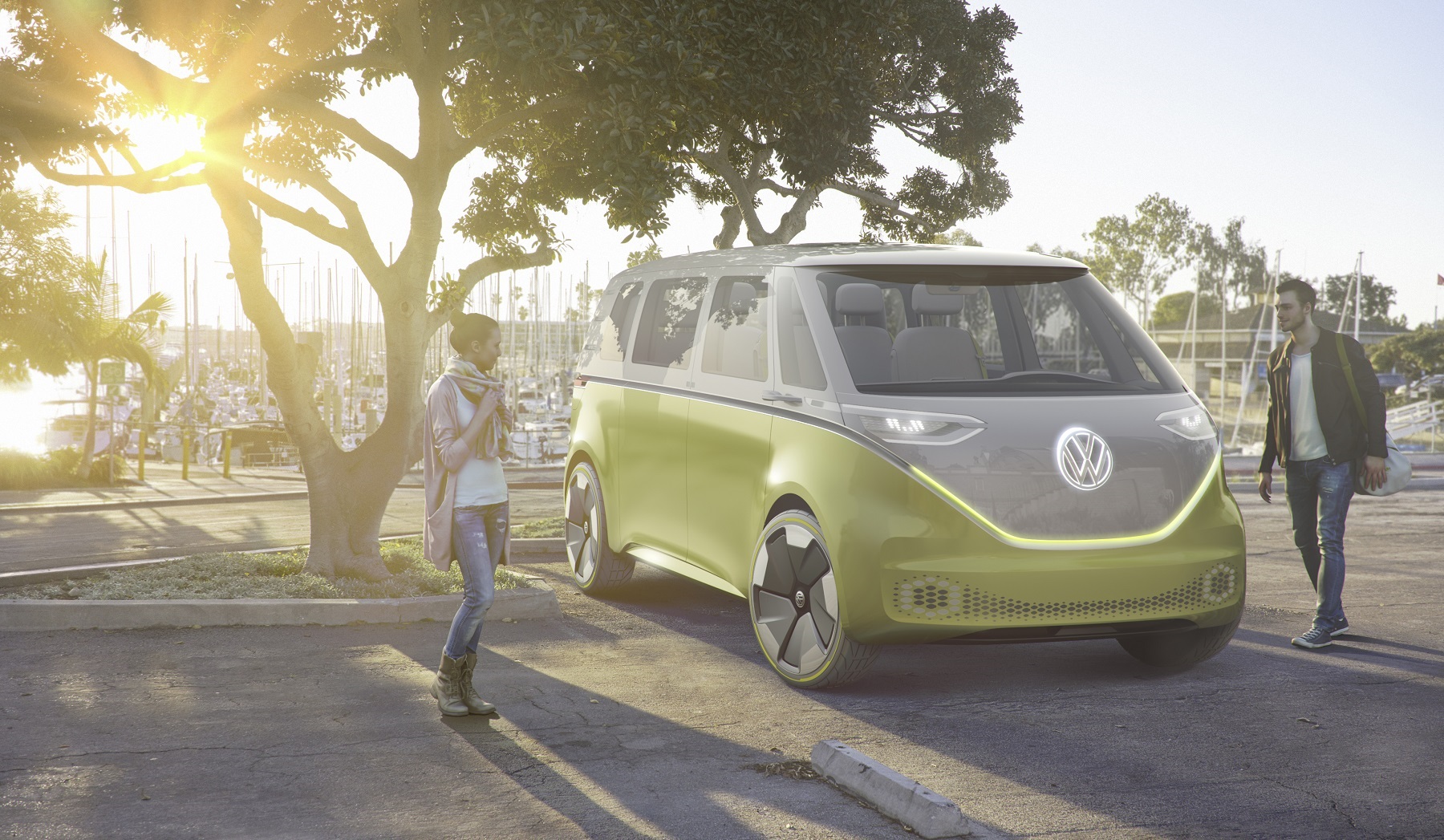 The first VW Bus sold in the United States in 1950 had all of 30 horsepower. The I.D. BUZZ, still being called a concept, sports 369 hp from electric motors on each axle that also provide all-wheel drive. The 111 kWh battery pack in the floor of the MEB chassis provides nearly 300 miles of estimated range. Using a VW fast-charge system, it can recharge about 80 percent of its energy in 30 minutes.

Although Volkswagen's oldest and newest Microbuses will be separated by more than seven decades, the I.D. BUZZ has the original's genes.

Unlike its predecessor, there are no door handles. Just wave, as you would to swipe on a smartphone or tablet. Sideview mirrors are replaced by tiny rear-facing cameras, as a number of manufacturers are placing on future models.

The new 21st century Microbus is being built on VW's new MEB electric platform, which will be used for additional models to come. Part of the design is a flat battery pack, along the undercarriage, which helps keep the center of gravity low. That means better handling, especially on turns, fixing an issue with the old Microbus, which always felt top-heavy.

The I.D. Buzz concept also offers a preview of the autonomous technology VW is developing for future models, namely its fully automated "I.D. Pilot" mode that could go into production by 2025. That includes a fold-away steering wheel, pop-up laser scanners in the roof, and a heads-up display that integrates augmented reality.

VW also is touting the new Microbus as a zero-emission urban delivery van, and plans to introduce a two-seater commercial cargo version at the same time as the passenger model.