The 2011 Boxster Spyder stands apart from the other roadsters in the mid-engine Porsche Boxster family with its unique, low and light, extended soft-top that protects driver and passenger from the sun's rays, wind and inclement weather. 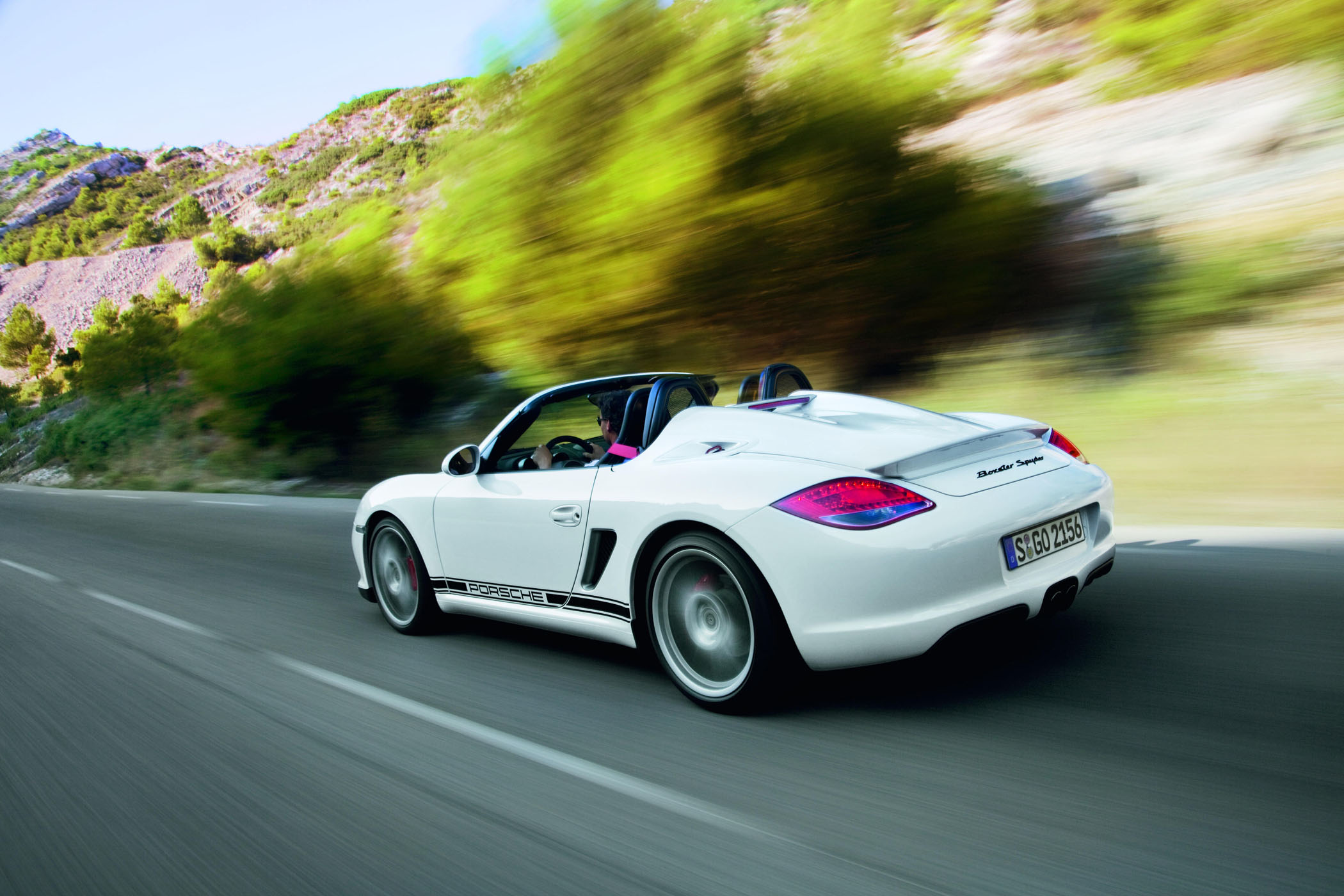 Power for the new Spyder comes from a 3.4-liter flat opposed six-cylinder with Direct Fuel Injection and Vario Cam Plus mounted ahead of the rear axle, that delivers 320 horsepower while generating 273 lb.-ft. of torque.

Two transmissions are available for metering power to the rear wheels -- a six-speed manual gearbox or Porsche's Doppelkupplung (PDK) automatic double clutch transmission with paddle shifters. Mate the PDK transmission with the Sports Chrono Plus Package, and the new Spyder, utilizing Launch Control, is capable of accelerating from 0-to-60 mph in 4.6 seconds.

Differentiating itself from regular Boxster and Boxster S, the Boxster Spyder sports a rear hood or deck lid with twin fairings incorporated with aerodynamic convex curves that taper in height and width from behind the headrests and ending just ahead of the fixed spoiler lip.

The chassis is lower and stiffer and there are revised camber settings fore and aft, with wider front wheels and lower tire pressures front and rear. The mechanically locking rear differential is now standard fare. 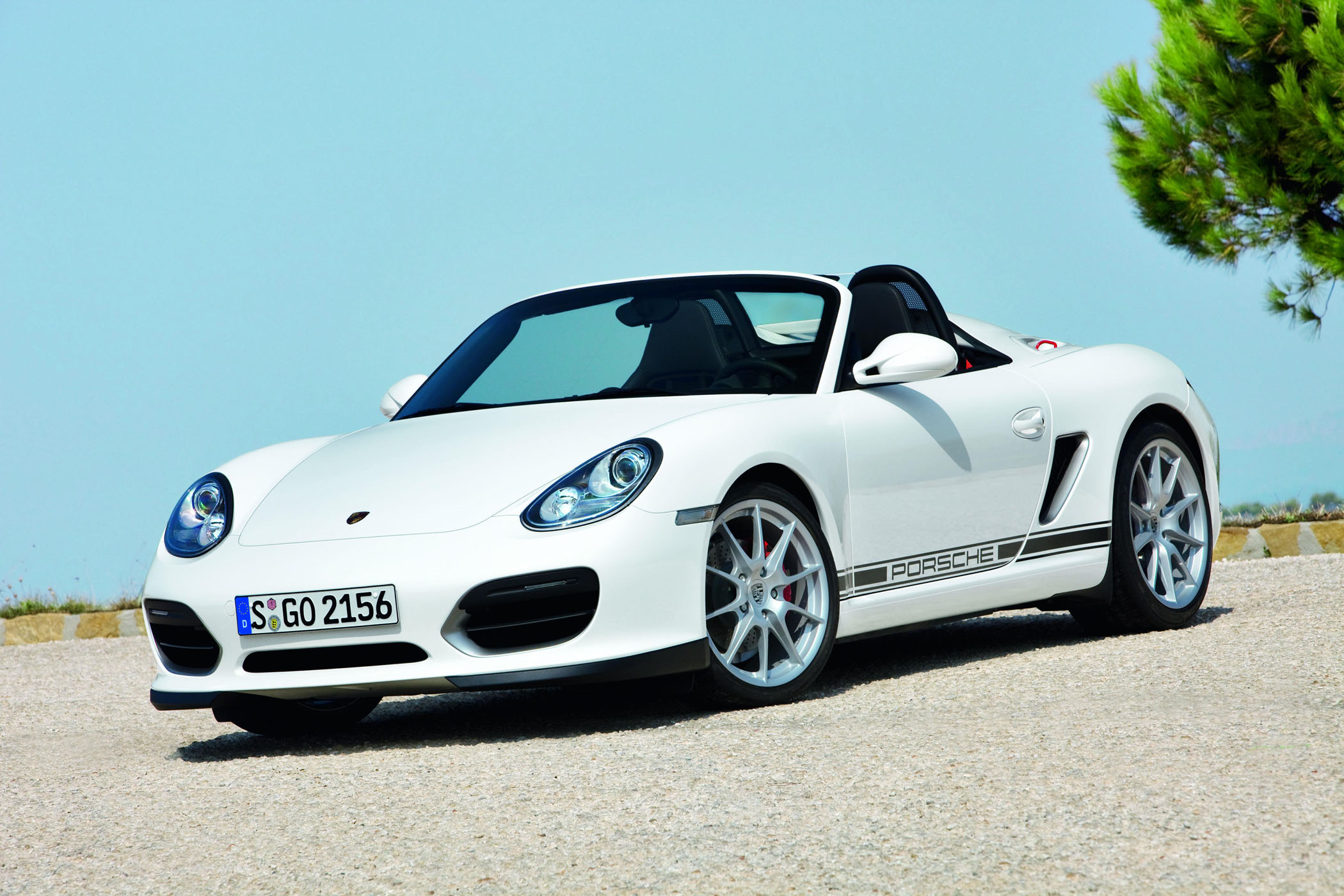 My test 2011 Porsche Boxster Spyder came with the 6-speed manual gearbox, wearing an exterior finish of Arctic Silver metallic and Black top and sported a Carrera Red leather interior. The base price was set at $61,200.

The 2011 Boxster Spyder is an incredible machine that begins as a basically stripped two-seat roadster, without radio, nav system, inside door handles, etc. The horsepower output is awesome for such a light car, and handling is spot-on. The ride quality is exceptionally firm over rough road surfaces, but that firmness results in the car's outstanding stability.

Entering the Spyder is a chore with the two-piece top in place. Raised hard cushion sides necessitate tall individuals like myself to place their backsides into the car first followed by swinging in legs and feet. Once inside however, the seats are actually comfortable and highly supportive. The seat back doesn't recline, but the steering wheel is both tilt and telescopic, allowing for a reasonable driving position, even for tall drivers.

The Spyder was developed primarily for open-air operation, and the top removal and replacement is a completely manual exercise. The top is typically Teutonic in its design and operation, consisting of roughly a dozen individual steps to remove and/or replace. My first attempt at removal took approximately 15 minutes, with the replacement taking about the same amount of time. I finally got the exercise down to about 5 minutes each way.

The Spyder is incredibly quick, and pushing the Sport Exhaust button allows for heavy notes to escape when the throttle is prodded in a spirited manner.

The two-seat roadster represents the epitome of a true purist, sports oriented vehicle. It is extremely agile and powerful, yet efficient, and, perhaps best of all, it is an open car.