The Ford Flex has styling cues actually taken from early 1940s Art Deco vacuum cleaners, such as the Electrolux, with its ribbed, aluminum sides. The result, believe it or not, is very appealing. 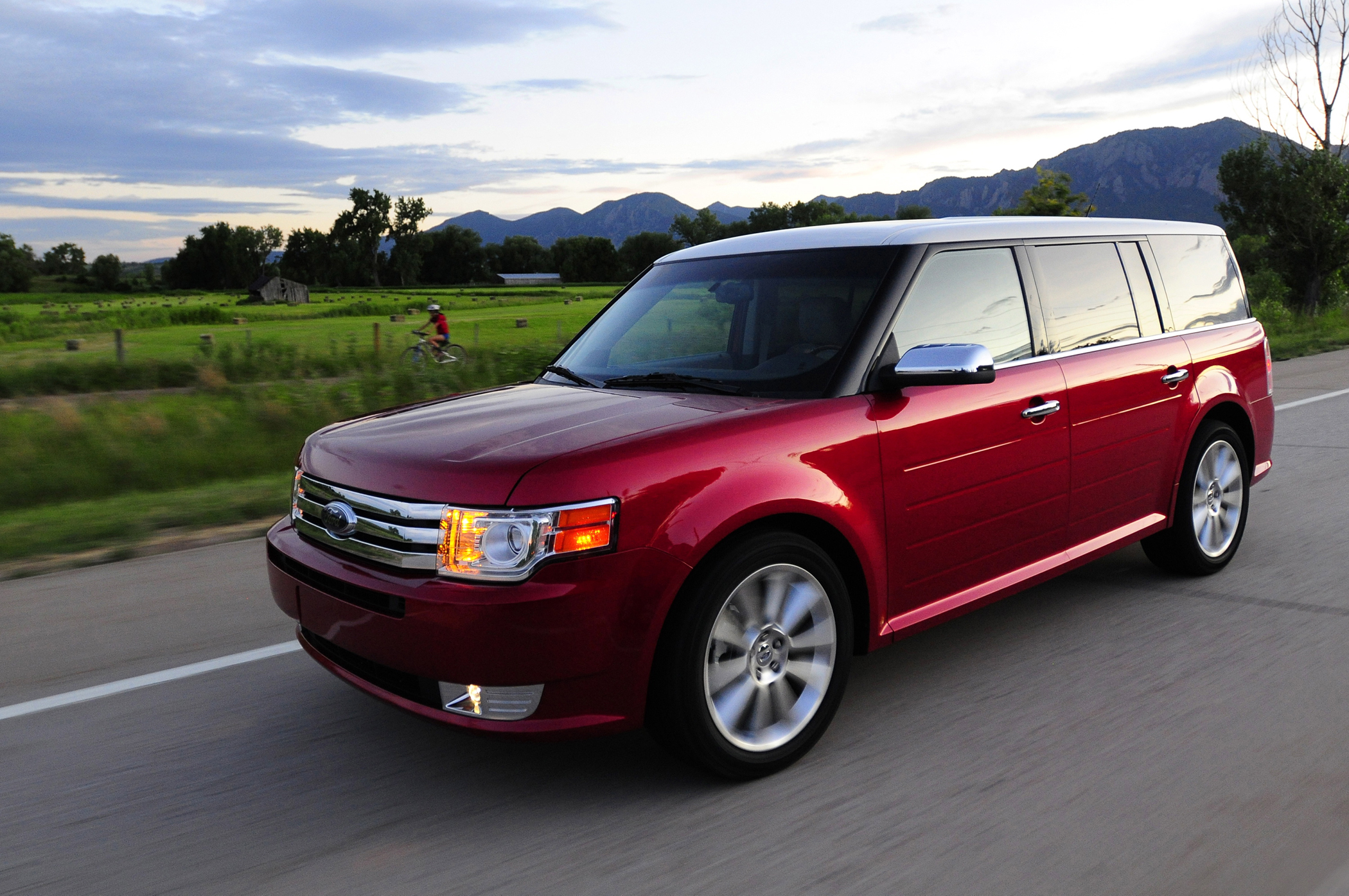 Flex has a long, low stance with a low roofline that appears to float above the cabin's extended glass area, thanks to the blacked out A-, B-, C- and D-pillars. The length of the vehicle is exaggerated by the horizontal side grooves that are repeated in the rear panel and reflect continuity of the bold three-bar chrome grille.

Flex variants include the well-equipped SE model; followed by a more upscale SEL model; and topped by the flagship Limited model. When first introduced for the 2009 model year, Flex drew its motive force from Ford's 3.5-liter Duratec 262-horsepower V-6 engine.

Now for 2010 there's a new engine choice: a 3.5-liter EcoBoost V-6 with Direct Injection that delivers 355 horsepower at a lower rpm (5,700), while generating 350 lb.-ft. of torque at 3,500 rpm. The EcoBoost engine provides the power of a V-8 engine, but with the economy and efficiency of a V-6. EcoBoost technology combines turbocharging and direct gasoline injection to improve fuel efficiency and lower CO2 emissions. 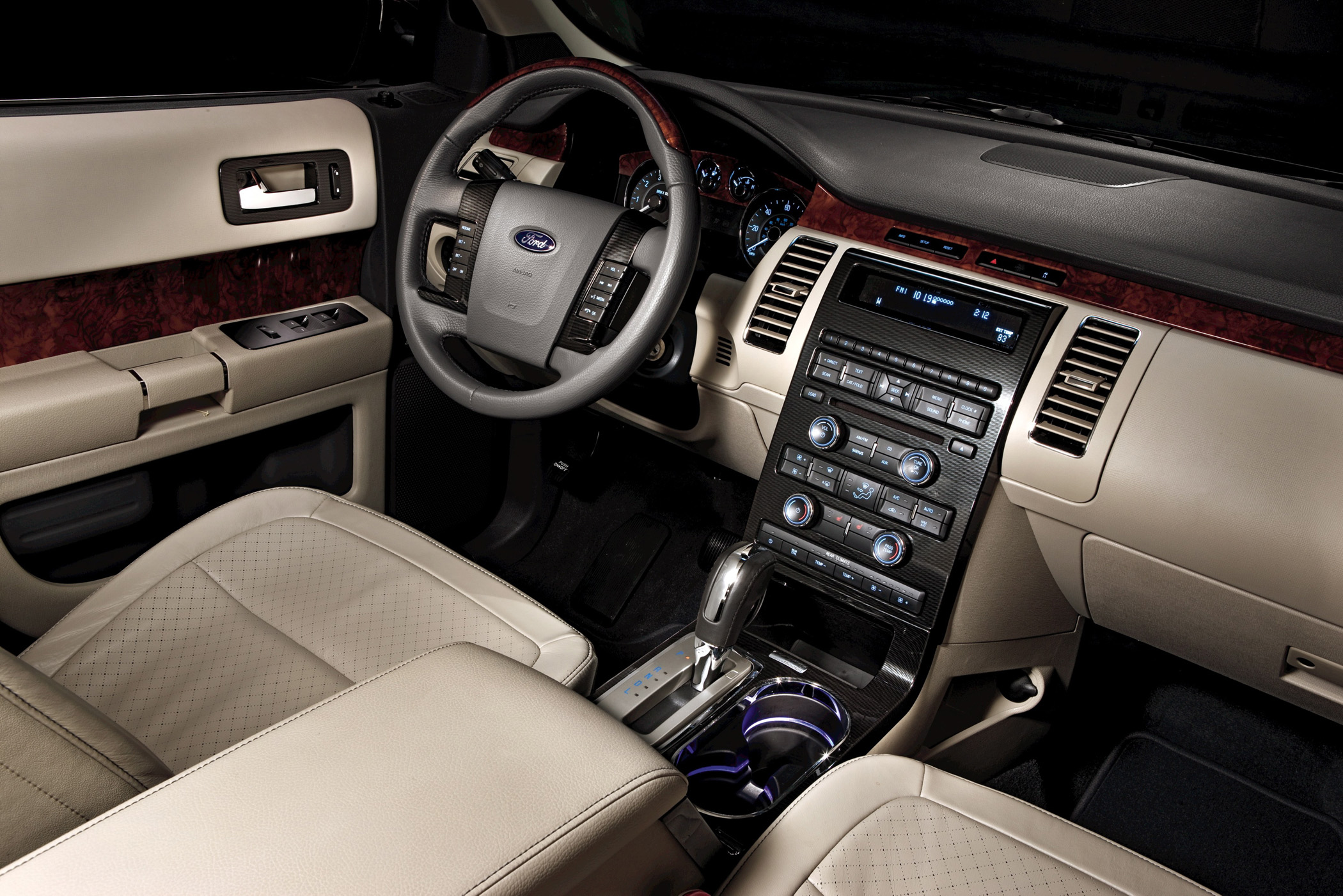 The 2010 Flex EcoBoost SEL AWD not only provides an innovative and refreshing styling execution, it also provides an enjoyable driving experience. With its power output the 3.5-liter EcoBoost V-6 delivers a V-8 power equivalent in terms of performance, with responsive acceleration, positive braking and smooth gear changes.

The intelligent all-wheel drive system constantly monitors and predicts traction, delivering torque to all four wheels, even before wheels begin to slip. The active, on-demand electronic center coupler is capable of allocating precise torque levels from front to rear (up to 100 percent to either axle) and when paired with standard AdvanceTrac with Roll Stability Control. The intelligent system is able to transfer torque from front-to-rear, as well as from side-to-side.

Flex is capable of seating six or seven passengers, depending upon the third-row configuration selected (50/50 split-bench and single bench are available). Seating versatility is key in providing flexibility for passengers and cargo solutions, with infinite stowage combinations that offer flat surfaces in partial or full doses. Access to the "Business-Class" seating is comfortable due to the low step-in height.

A Multipanel Vista Roof is available on Flex SEL and Limited models, providing four roof glass panels for natural light in all three seating rows. Panels include an operable front-row sunroof/moonroof and a large rear glass panel featuring individual frames in the Flex's headliner for second and third occupants.

Bottom-line, the Ford Flex with the EcoBoost V-6 presents itself as a refreshing change of pace for the Blue Oval team. It is not only innovative, it's attractive as well.