The all-new 2011 INFINITI QX56 displays a dramatic and dynamic presence, with styling cues that no longer make it simply a dressed up Nissan Armada. The Infiniti QX56 is a sophisticated, superbly luxurious full-size SUV that delivers state-of-the-art technologies and features, ensuring the ultimate in heightened levels of luxury travel. 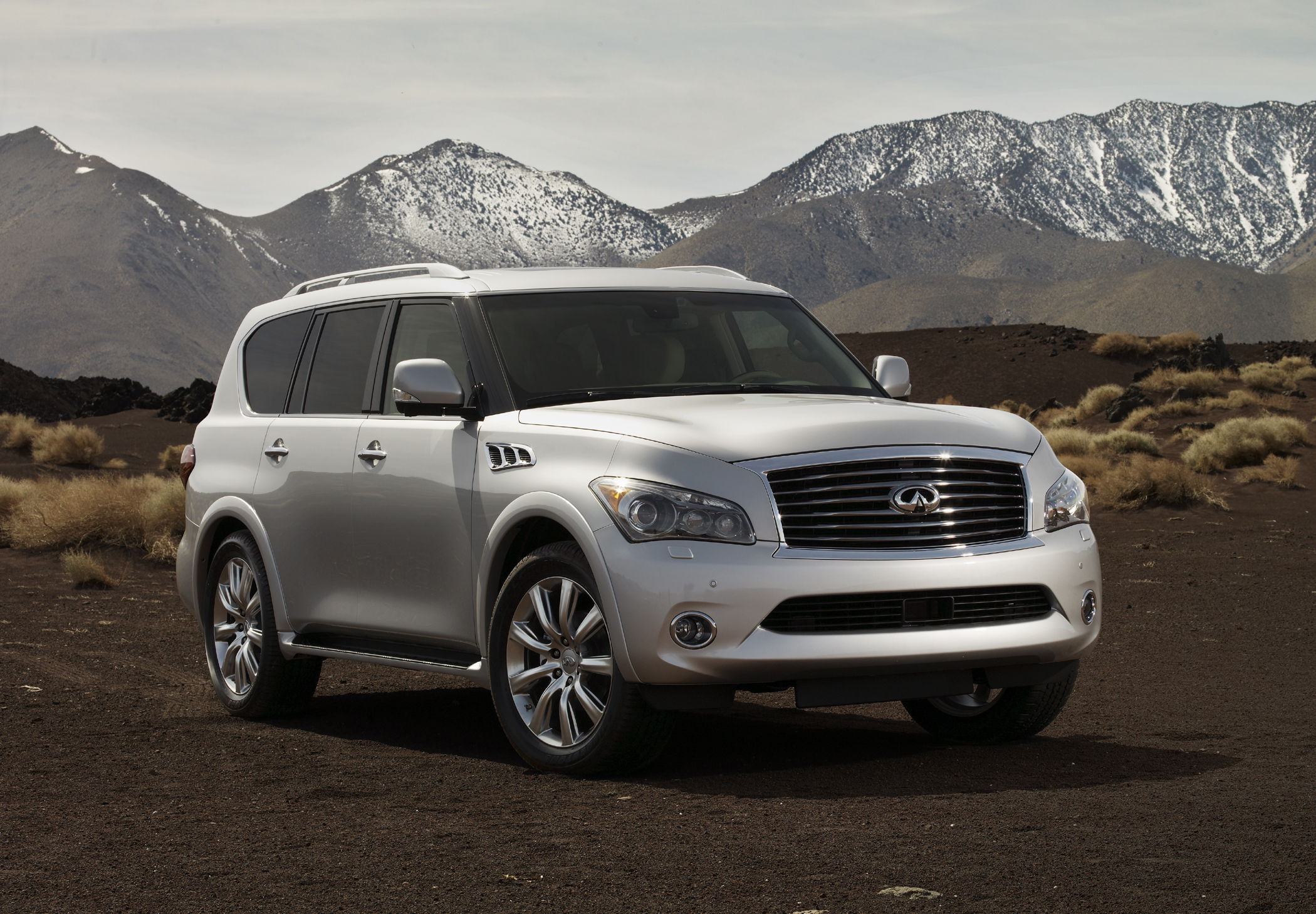 The bold presence of the QX begins up front with its prominent double-arch grille, flanked by low positioned, swept-back headlamps and domed, wave-like hood. Decorative side vents appear between the hood line and fender arch, just ahead of the front door's leading edge.

The driver's side vent is functional, providing engine air intake. Other functional design elements include the front and rear spoilers that enable zero lift, aiding in improved handling stability and the specially shaped exterior mirrors that reduce wind noise. The built-in running boards and low roof rails, along with the standard 20-inch wheels and tires add to the athleticism of the QX.

The inspired performance of the 2011 Infiniti QX is provided by a new 5.6-liter, 32-valve V-8 engine with Direct Injection. The engine produces 25 percent more power over the previous model for 400 horsepower along with 413 lb.-ft. of torque. Despite increases in horsepower and torque, fuel economy is 14 percent more efficient, with city driving yielding an additional 2-mpg at 14, while highway travel registers 20 mpg (up 2 mpg for 2WD models and up 3 mpg in 4WD models).

The V-8 engine couples to a new 7-speed automatic transmission with driver Adaptive Shift Control, a manual shift mode and Downshift Rev matching. The 4WD system is Infiniti's All-Mode 4WD, which in its automatic mode is rear-drive biased and continually adjusts power between front and rear wheels, delivering up to 100 percent in the rear and a maximum of 50 percent motive force up front. The 4High locks the center differential at 50:50 and is operational up to 60 mph. 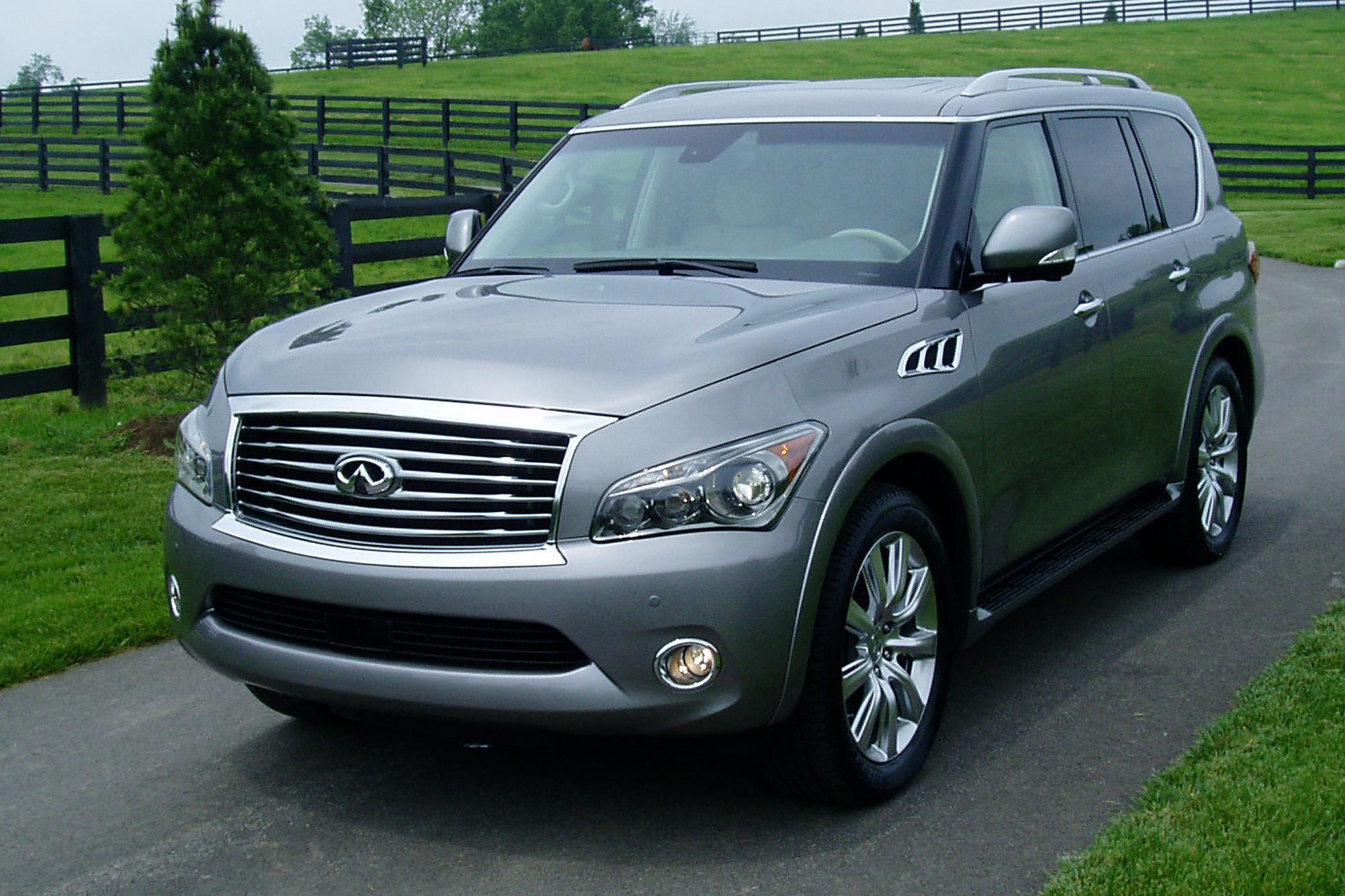 My test 2011 QX was a 2WD model that was loaded with virtually all of the available options. The base sticker read $54,756 while the addition of optional fare elevated the final tally to $64,550.

The 2011 Infiniti QX possesses a distinctively elegant look -- especially for a vehicle of its mass at 5,850 pounds. The lines are fluid and flow smoothly. Yes it's big, and yes it's an SUV, which are disdained by many, but it serves a definitive purpose: to transport up to eight occupants in sumptuous luxury and security.

The interior is not unlike that of an executive jet. The acceleration isn't as rapid as a jet, but it certainly more than fills the bill with sedan-like handling and stability. The QX stays flat under spirited maneuvering conditions on challenging roadways. The Premium Bose Sound System fills the cabin with superlative audio quality.

The list of standard features and equipment seems never ending, and when one throws in the full complement of available bells and whistles, the content of this second-generation QX borders on unbelievable. Even for those who are not fans of full-size V-8 SUVs, the 2011 QX56 makes a sound case for the continuation of such vehicles for those who wish to travel in opulence.