The 2011 Audi A8 quattro is bigger and better than ever before in both base form and in the extended wheelbase configuration, the A8L. 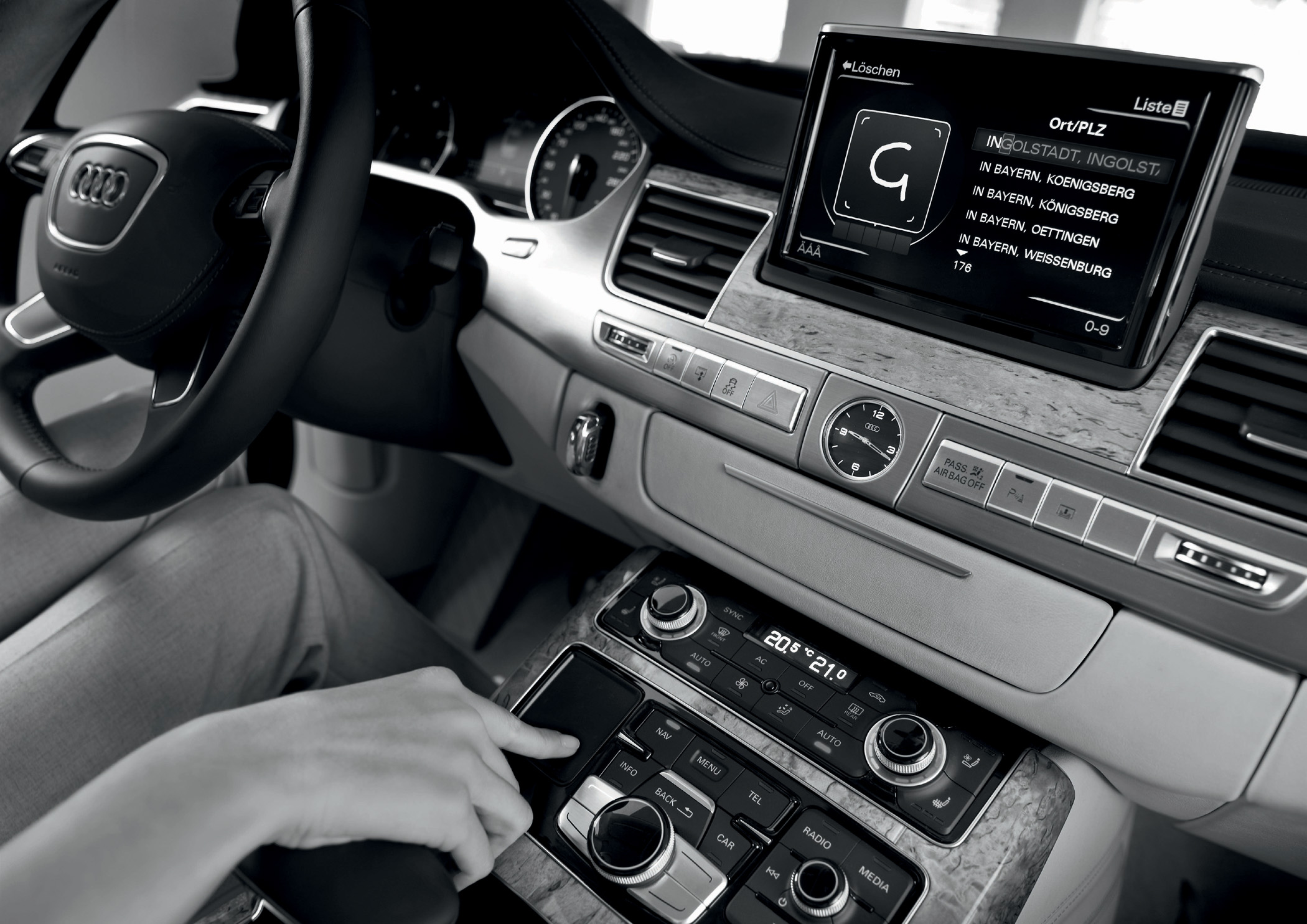 The 2011 A8 displays a more elegant presence, but with a bolder, more athletic persona. The grille is enlarged and pronounced, sporting 8 chrome horizontal bars positioned in a single frame trapezoidal surround. The grille is flanked by newly designed headlamps, LED running lights, directional signal light tubes, along with dual bar-covered air intakes and integrated fog lamps.

The nose is elongated with the hood flowing upward into the sharply raked windscreen. The greenhouse offers up a coupe-like effect with its blacked out pillars.

My tester was the regular wheelbase A8 with Quattro powered by a 4.2-liter V8 with variable intake-valve-lift system and mated to an 8-speed automatic. The engine generates 22 more horses -- 372 horsepower at 6,800 rpm. The torque rating is 328 lb.-ft. feet at 3,500 rpm. This 2011 A8 is capable of traveling from 0-60 mph in a mere 5.7 seconds -- pretty impressive considering the 2 tons-plus of mass -- while also managing to achieve significantly improved fuel economy of 17 miles per gallon city and 27 mpg highway.

The acceleration is instantly responsive and the handling characteristics provide a spot-on feeling of control. The ride quality is extremely compliant over all surfaces without being mushy. The variable ratio steering delivers the correct amount of input across the board as needed in every situation. The adaptive air suspension automatically tightens up and teams with the steering as speed increases, allowing the A8 to corner with the agility of a sport sedan. 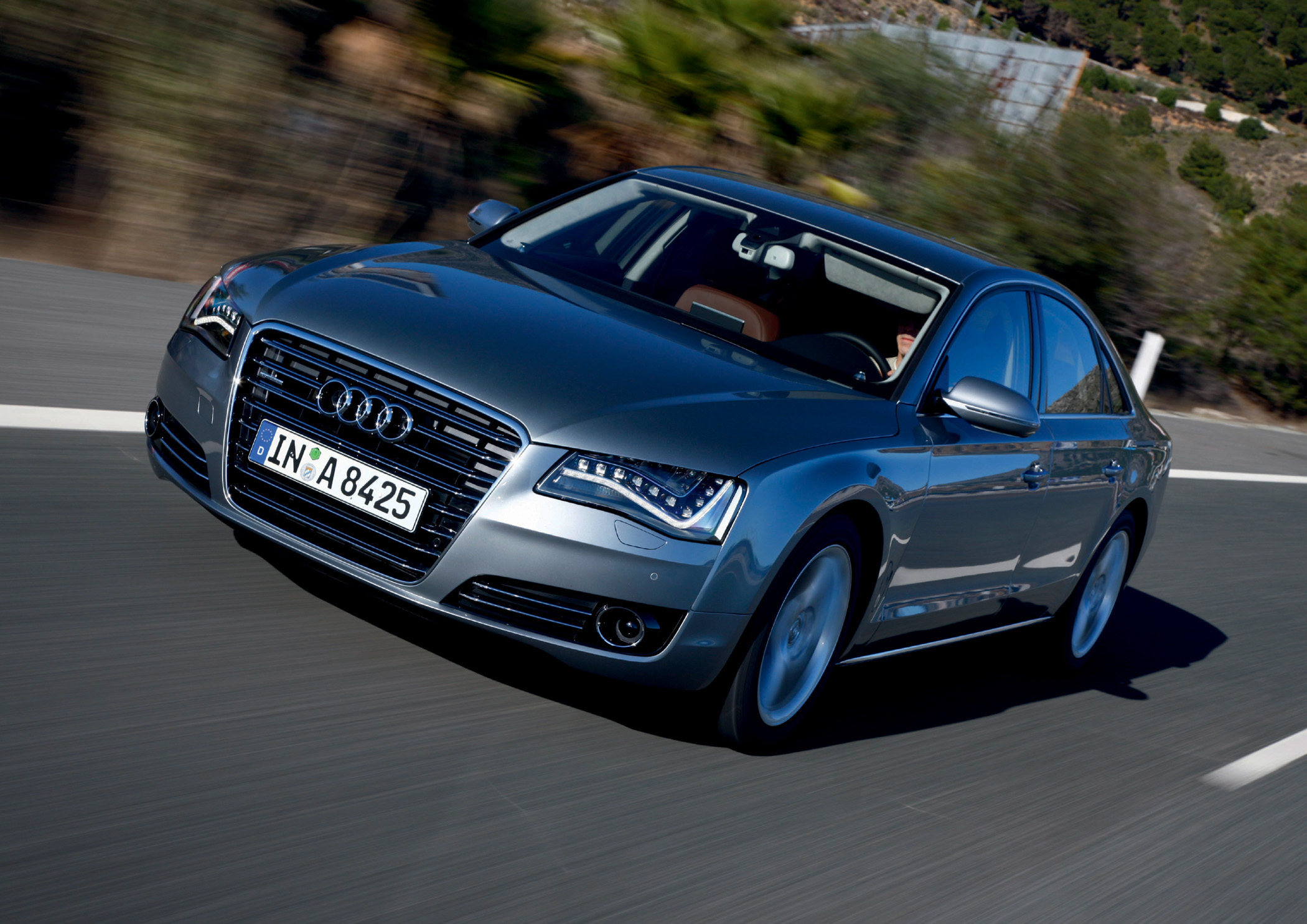 The Goodyear Eagle F1 rubber mounted on 10-slotted-spoke 20-inch alloy wheels help with traction and grip during more spirited maneuvers. If there's any misgiving with the new A8, it's that it is perhaps too quiet inside -- the pleasing notes of the engine and exhaust are muffled with the windows up, and even the horn sounds a tad weak. All are more noticeable with the windows down.

This fourth generation A8 sports a longer wheelbase, is longer overall, wider and taller than its predecessors. It has also gained a little weight at 4,436 pounds, but the added horsepower gained by the addition of Audi's variable intake-valve-lift system and reduced internal engine friction negates any extra heft.

The new interior reveals an enhanced and more luxurious atmosphere that is tastefully executed with several significant new nuances including: the beefy three-spoke steering wheel with functional controls and paddle shifters; the pop-up Bang and Olufsen dash speakers and info display screen; the t-shaped, putter-style gear selector; and Audi's Multi Media Interface with an updated touch pad control feature, which allows spelling out navigation entries by scrawling with one's finger directly onto the pad -- a totally cool and unique feature that is faster and easier than spelling out names conventionally.

An optional 22-way front seating adjustment allows one to achieve the optimum driving position despite their physical makeup. The quilted, sculpted and supportive seating surfaces provide heat and cooling, as well as five different massaging functions. Base pricing is about $79,000, while a fully optioned A8 such as my tester, may go as high as $95,000.

The 2011 A8 sedan is truly the new Lord of the Rings. Well okay, the A8L is bigger, so perhaps the A8 is only the heir apparent.