The all-new 2012 Chevrolet Sonic hatchback delivers a youthful and aggressive design that is destined to seriously challenge the likes of Ford's Fiesta, the Honda Fit and Toyota Yaris. 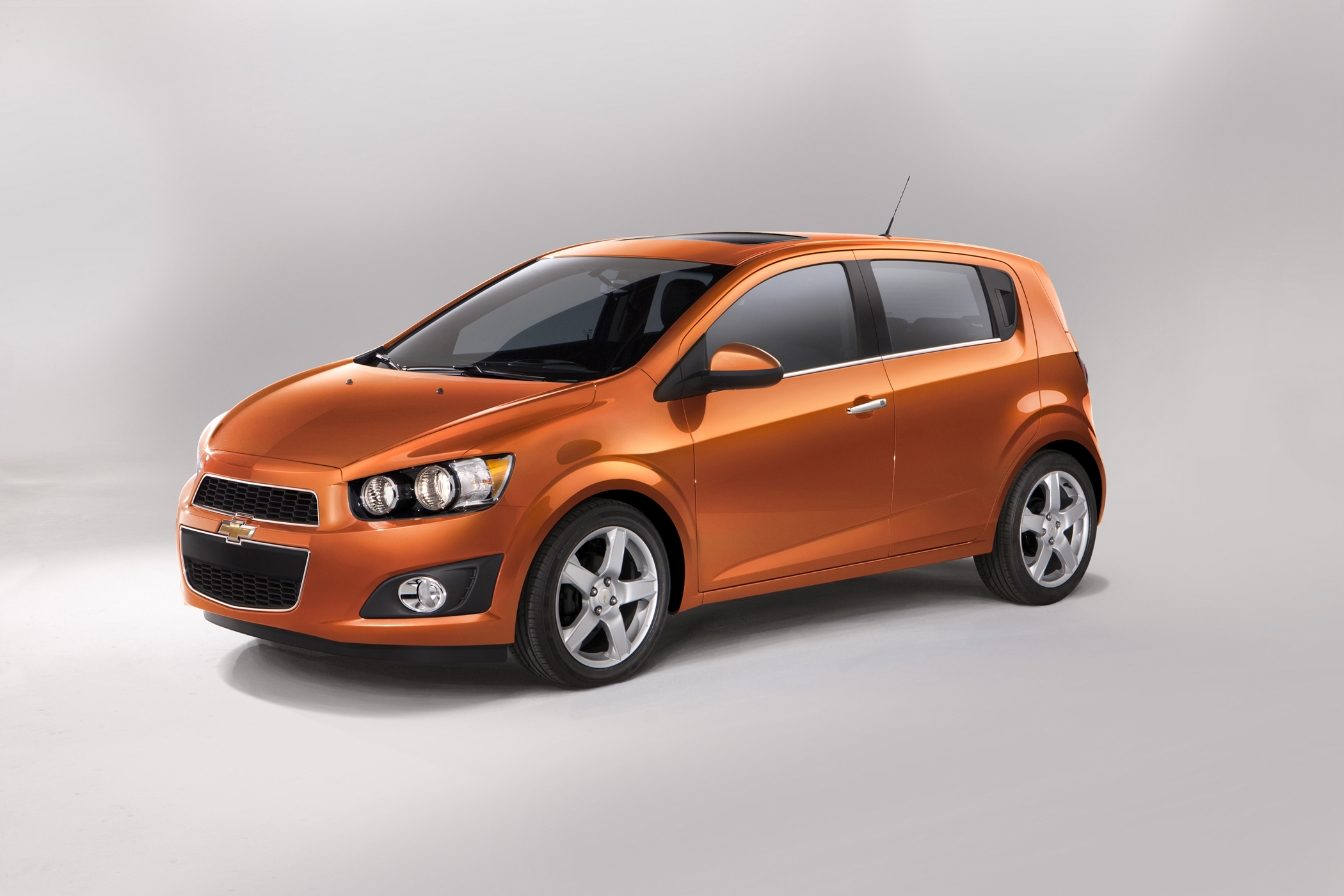 The Sonic is offered in two body styles when it goes on sale this fall with a starting price of $14,495 -- the sedately stylish Sonic four-door sedan and the sportier, performance-oriented Sonic five-door hatchback, which starts at $15,395.

Two engines will see duty in the new Sonic: the standard Ecotec 1.8-liter four-cylinder 130-horsepower engine paired with either a five-speed manual or six-speed automatic transmission; and an available 1.4-liter turbocharged engine that delivers 138 horses along with 148 lb.-ft. of torque.

At the 100th Chevrolet Anniversary program held at this year's Indy 500 race, Chevy's Sonic development team set up a challenging autocross course at the nearby Lucas Oil Speedway for a group of national automotive press. We were able to pilot several pre-production versions of the 2012 Sonic five-door hatchback, powered by the 1.4-liter turbocharged engine coupled to the six-speed manual gearbox.

Each driver was given a four-lap rotation on the closed-course in the Chevy Sonic, Honda Fit and Ford Fiesta. All three of my Sonic runs turned in quicker times that either of my Fit or Fiesta runs. From an objective point of view, the Fit felt great and seemed quick, while the Fiesta (the only automatic transmission in the mix) felt sluggish. 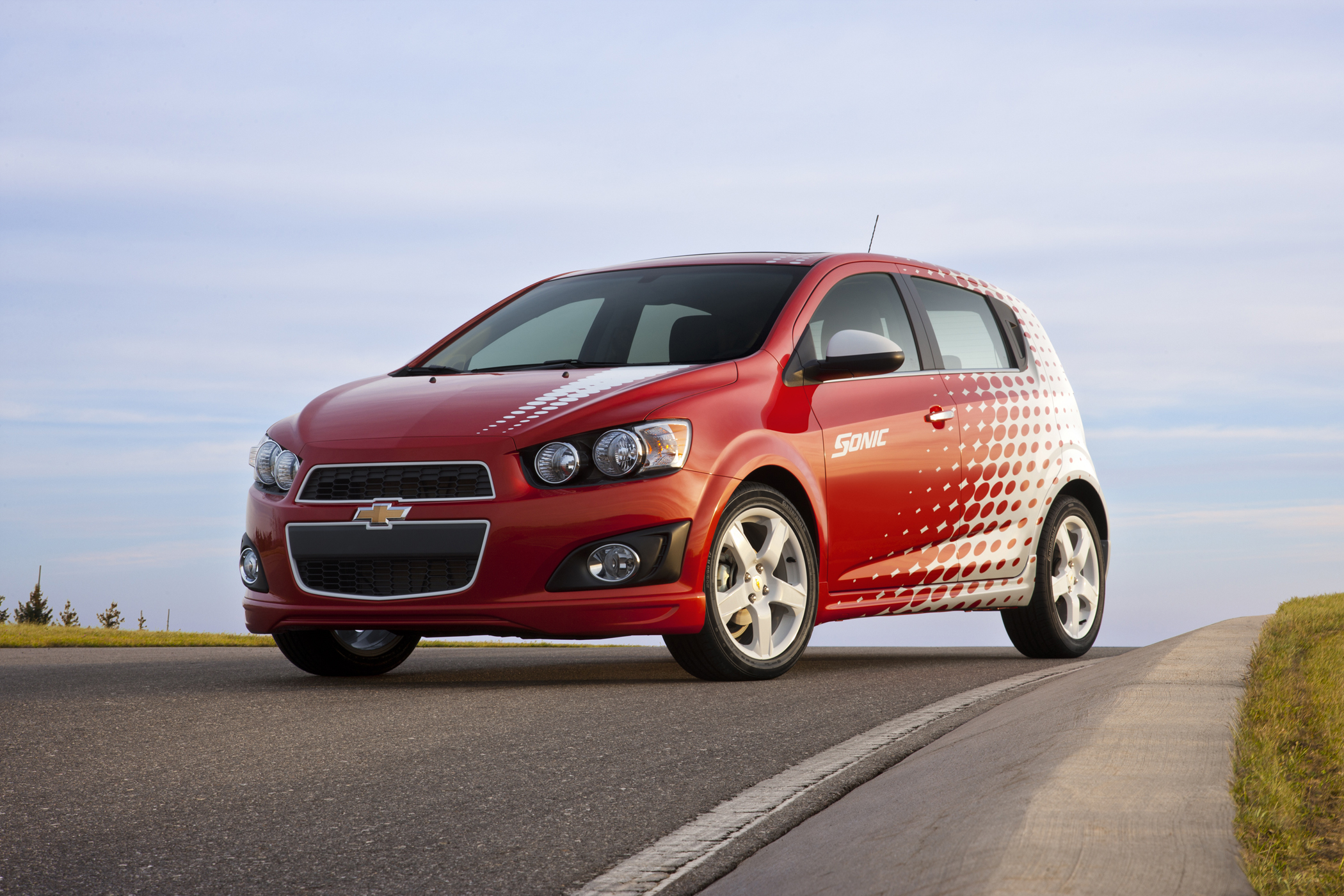 The Fiesta, however, fared much better when dropping the gear selector into Low and allowing the transmission to automatically shift into second gear when hitting the rev limiter. The Sonic's steering input initially felt somewhat benign, but the car managed to turn in better and more quickly than the Fit or Fiesta.

The turbocharged 1.4-liter delivered instantaneous throttle response with virtually no noticeable turbo lag. The ride quality was a bit stiff and firm, yet not harsh or uncomfortable. Handling, though initially feeling slightly numb, performed positively and quickly through the electric power steering.

The Sonic sedan and the Sonic hatchback are distinctively different. The five-door comes in a tight, two-box shape with sporty, aggressive lines, while the sedan's "notchback" profile displays a more sophisticated and mature presence. Personally, I found the five-door hatchback more appealing than the four-door sedan. At first glance, the five-door model appears to be a three-door hatch because the rear door handles are discreetly located in the C-pillar area.

The new 2012 Sonic projects a sense of strength, stability and refinement from virtually every angle. Its stance is wide and planted and the sharply raked body lines suggest forward motion, even when stationary. Up front is a dual element grille, while out back are motorcycle-inspired round taillamps.

Styling includes chrome grille surrounds and matte black honeycomb grille inserts on all models, with a range of large wheel sizes -- including 17-inch alloy wheels -- that attest to its sporty demeanor. The Sonic's interior cabin continues with the motorcycle-inspired theme, featuring a large, round analog tachometer set within an asymmetrical LCD readout, including a large digital speedometer display. The automatic shift knob displays a "cobra head" design," while the manual shifter has a chrome-finished knob. EPA fuel economy ratings will be released closer to the on-sale date this fall.