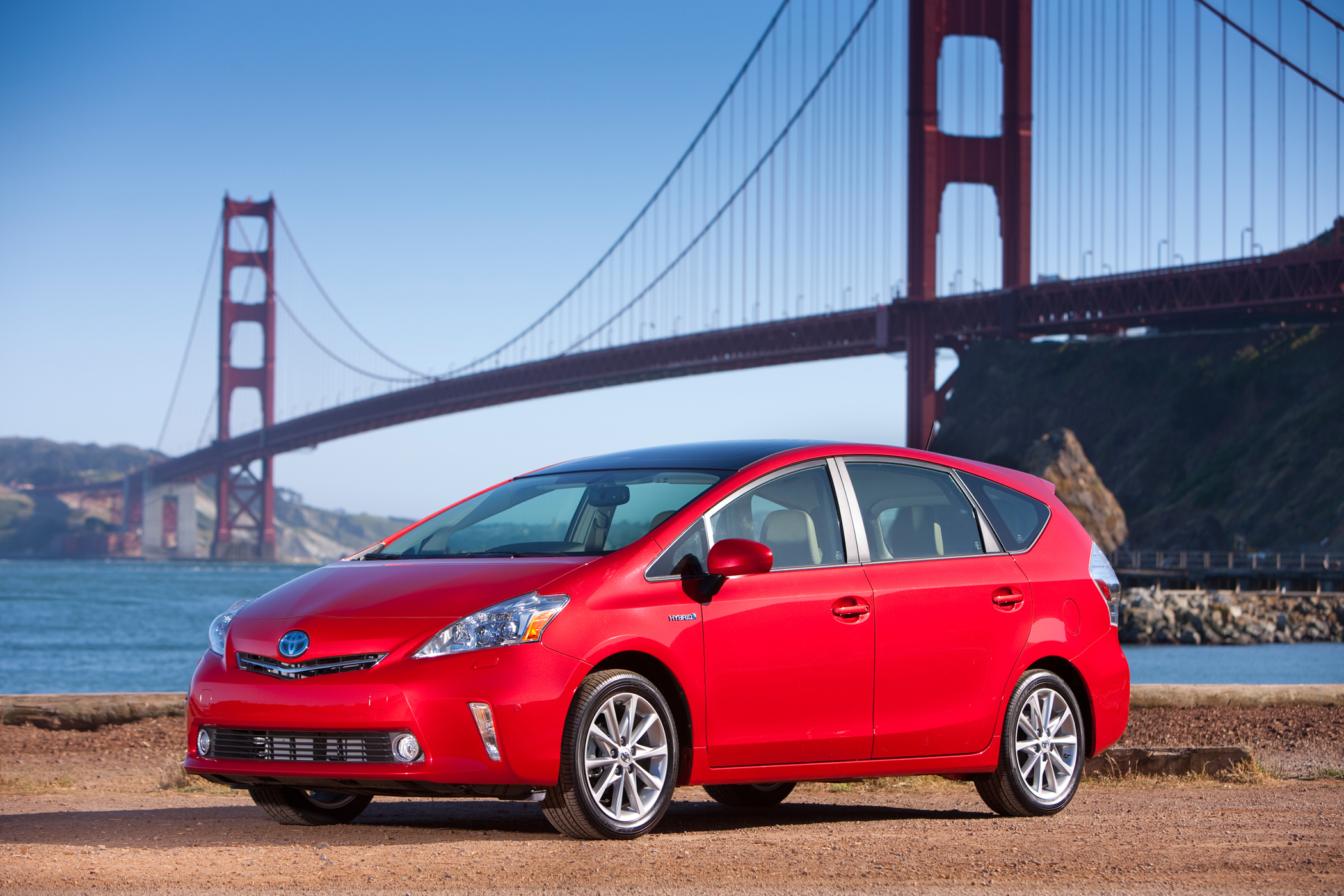 Manufacturer photo: The newest entrant in a growing Toyota Prius family of hybrid vehicles, the 2012 Prius v delivers a blend of versatility and fuel efficiency in a comfortable package

Toyota plans to launch 10 new models within the next 20 months, six of which will be totally new -- and by 2020, the plan is to have a hybrid option for every Toyota model.

In terms of its appearance, the 2012 Prius V wagon still looks like a Prius, but in a considerably more refined way, and in a more versatile and spacious wagon form. We think it actually now appears to be more balanced with better proportions.

The wheelbase for the V (for Versatility) is increased 3 inches to 109.4 inches, the length by 6 inches to 181.7 inches. Height is added by 3 inches and the width is increased by 1 inch. In our view, the Prius V wagon has sacrificed none of the sedan's earlier principles, while managing to evolve intelligently to a more spacious and more ecologically friendly vehicle. It is only slightly slower than the sedan (0-60 mph in 10.4), and performs well on the highway while delivering a comfortable ride.

The upper grille slot on the 2012 Prius V has been minimized to improve airflow over the body's upper half, while the lower grille opening below the bumper has been enlarged reducing air flow resistance and increasing cooling efficiency. The windshield rake angle has been increased, giving the cabin a sleeker image that flows into the raised rear with an integrated spoiler lip. 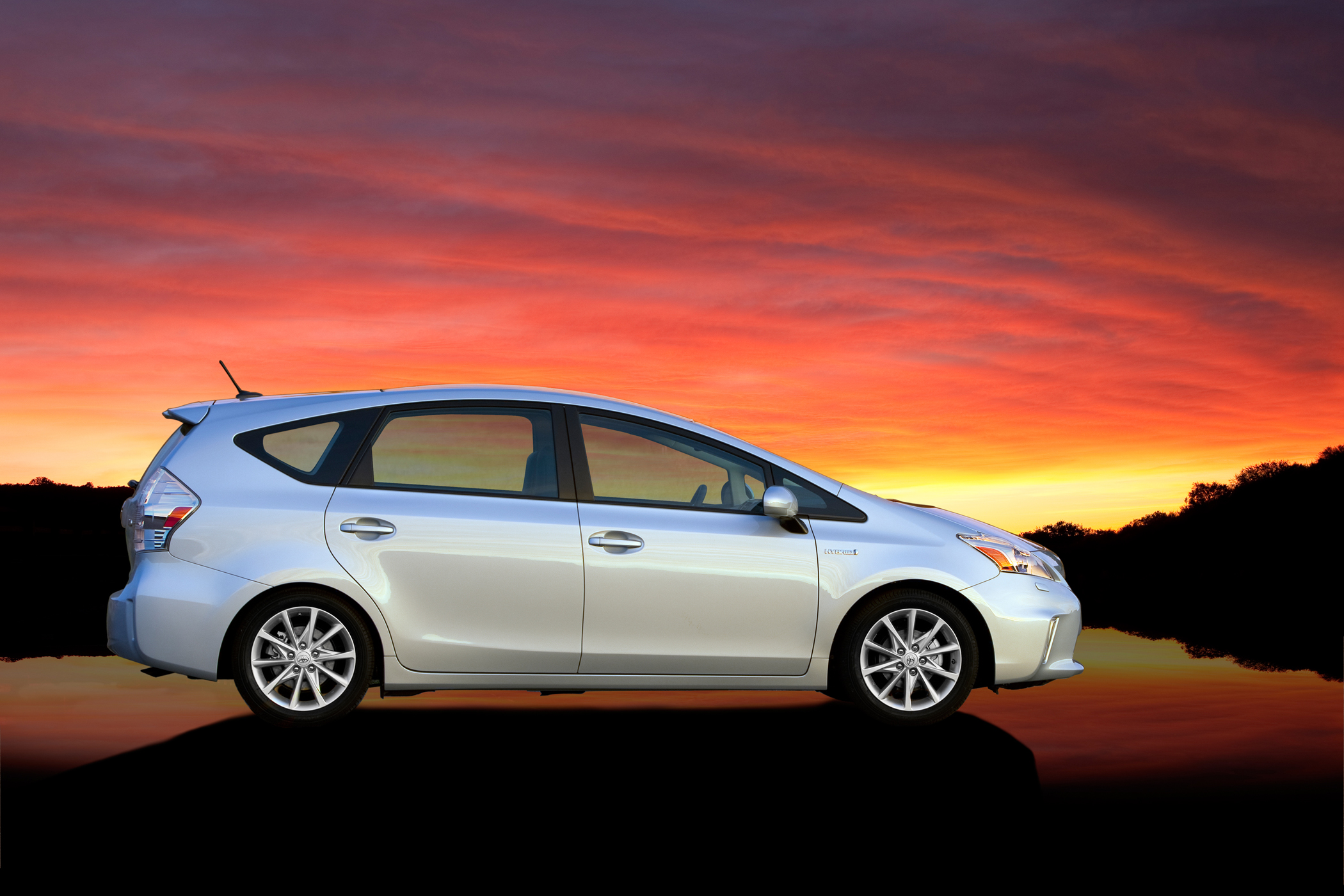 Starting at $26,400, there are three trims for the 2012 Prius V: Two, Three and Five. Our test vehicle was the loaded to the hilt Prius v Five model sporting a Dark metallic Blue exterior, with a two-tone gray interior.

The Prius V wagon drives and handles just like its sedan counterpart, but with greater versatility and more functionality. For the ecologically conscious, there are four operational modes: Normal, Power, EV and ECO. The EPA mileage estimates are 44 miles per gallon city and 42 mpg highway. Hyper milers will certainly be capable of doing considerably better.

The Atkinson-cycle engine moved from 1.5-liters to 1.8-liters. Toyota's Hybrid Synergy Drive System consists of the 1.8-liter Atkinson cycle 4-cylinder plus a Permanent Magnet Synchronous Motor. The Hybrid system delivers a net 134 horsepower, while the gasoline engine generates 98 horsepower and 105 lb.-ft. of torque. Motive force is delivered to the front wheels through an electronically controlled, Continuously Variable Transmission.

The hybrid battery pack is now more compact -- a contributing factor to the increase in interior volume -- along with the bumping up of physical dimensions.

Inside, the gauging format is revised, while still providing a wealth of operational feedback, with the surrounding panel and seat inserts executed in a leaf vein pattern. Rear seat room is increased offering greater rear passenger comfort. The 60/40 split rear seats both recline and fold flat. There are rear cargo bins, a stowable tonneau cover and the center console features a removable tray. In all, cargo space has been increased by 38 percent.

For the most part, controls and switchgear have been simplified for optimum user friendliness. Soft touch materials add to the interior's ambience. Technology abounds in the Prius V, with an impressive multi-media system with EnTune, a smart key, seven standard airbags, backup camera and a pre-collision system.

If you're a fan of the Prius sedan and are looking to move up to more space and features, then you'll like the value and versatility in the new Prius V wagon.