Toyota continues to evolve the iconic Prius hybrid with the introduction of new model variants. Enter the all-new 2012 Prius c. The "c" designation stands for "city". 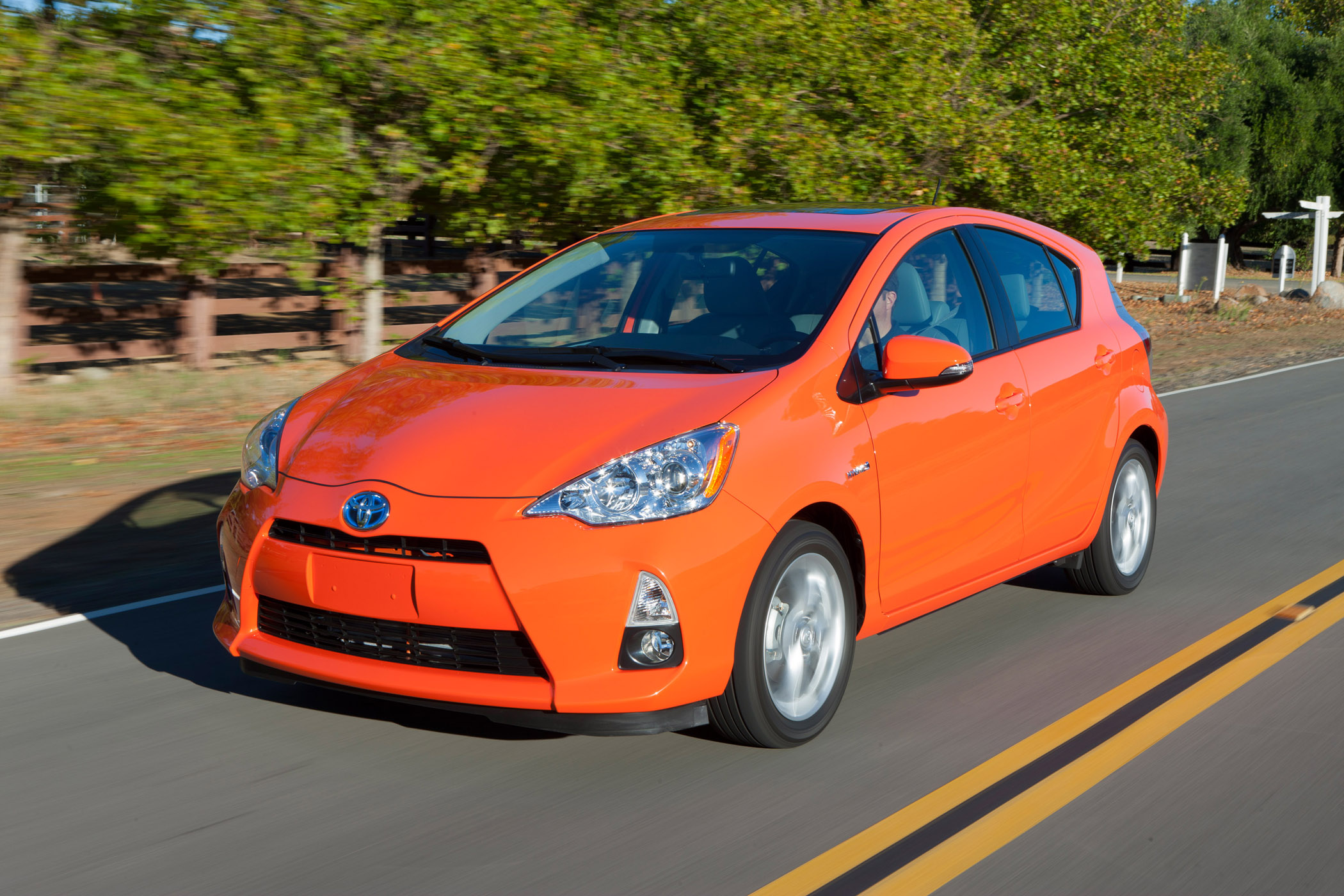 With a price point starting at $18,950, the Prius c is a four-door subcompact hatch that now serves as the entry-level hybrid in Toyota's fuel-efficient stable of vehicles. The 2012 Prius c promises to deliver the highest-rated city fuel economy of any vehicle currently on the market -- without an electrical plug -- with city EPA ratings of 53 miles per gallon.

Visually, the 2012 Prius c displays a sleek, youthful and sporty image, with its aerodynamic form, athletic, low, wide stance and smaller overall footprint than its siblings. Wheel wells are pronounced, as the front and rear connect by a gently rising character line.

The Prius c weighs 542 pounds less than the current Prius Liftback, tipping the scale at 2,496 pounds. It is not only lighter, but smaller dimensionally as well. While adapting the Hybrid Synergy Drive to fit the diminutive Prius c platform, each of the system's major components were redesigned and re-engineered to effectively reduce weight and scale and to improve efficiency.

Despite its subcompact dimensions, the effective packaging strategy has positioned key drivetrain componentry within the chassis, while focusing on optimizing usable interior space -- along with maximizing handling characteristics. The gasoline engine, transaxle and power control unit are positioned in the Prius c to enhance weight distribution and to lower the center of gravity. 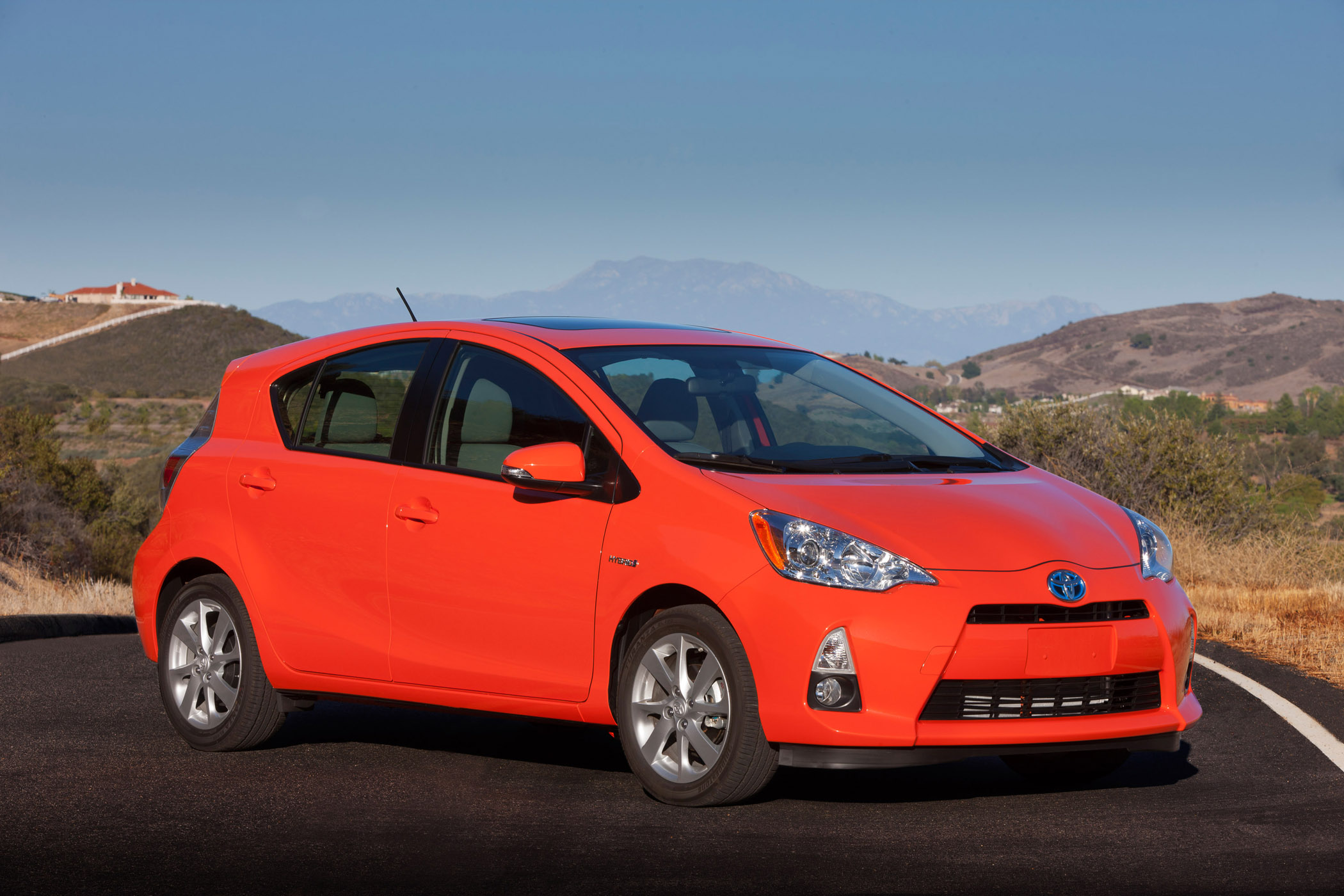 The fuel tank and 144-volt nickel-metal hybrid battery pack, which weighs 68 pounds and consists of 120 cells, are placed together beneath the rear seat, resulting in 104 cu.-ft. of interior volume (87.4 cu.-ft. passenger volume along with 17.1 cu.-ft. of cargo space).

During the national press launch, journalists were afforded the opportunity to test drive preproduction Prius c vehicles in varying grade levels. My driving partner started our test exercise in a very base grade Prius c One that sported an Absolutely Red exterior and featured a gray cloth interior with Charcoal trim elements, riding on 15-inch wheels and tires.

As usual, driving a Toyota Prius Hybrid model is much like piloting a conventional non-hybrid vehicle, except for the engine Stop/Start feature and regenerative braking, along with Eco and EV modes, which extend range.

The new Prius c lineup represents a more affordable way to get into ownership of a proven hybrid vehicle. It is actually fun to drive, despite the fact that the smaller gasoline engine has to work harder on steep uphill runs. The grades that are equipped with 16-inch alloy wheels and tires deliver more solid handling character characteristics than those grades with 15-inch donuts. The grades equipped with 16-inch rolling stock also enjoy a more precise steering feel and suspension enhancements for a really noticeable plus in sporty feedback. 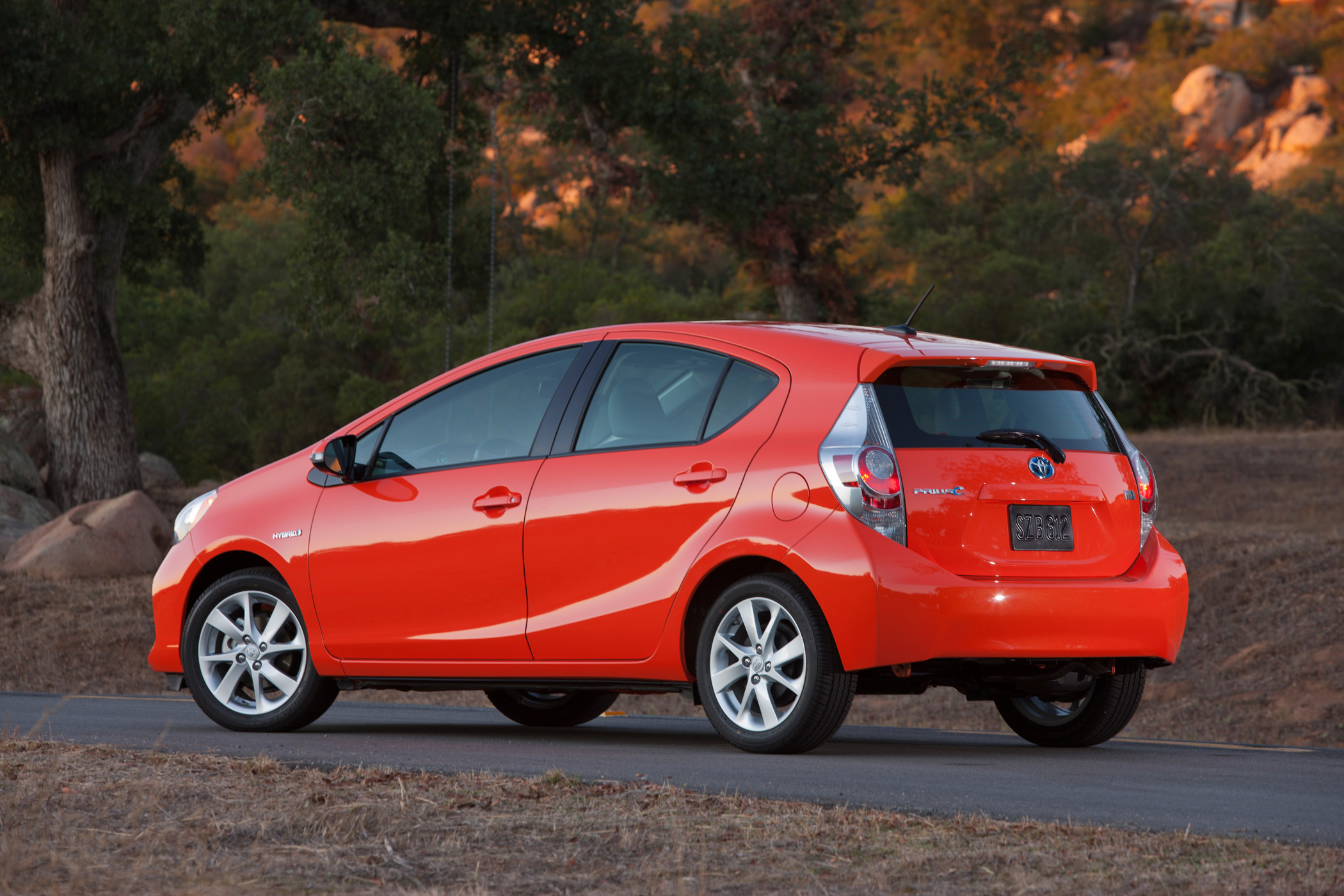 Whether the new 2012 Prius c will appeal to its primary target market of early 20's young adults remains to be seen, but bottom line, it is sure to have a strong appeal to consumers who desire to own an affordable entry level hybrid vehicle that's loaded with state-of-the-art technology and convenience features and equipment.