The original Beetle ranks as the most successful single platform car design ever. Then, when the "New" Beetle appeared on the scene in 1998, it was viewed by many to be a "chick" car -- and as a man I can say the New Beetle didn't register on the machismo scale. 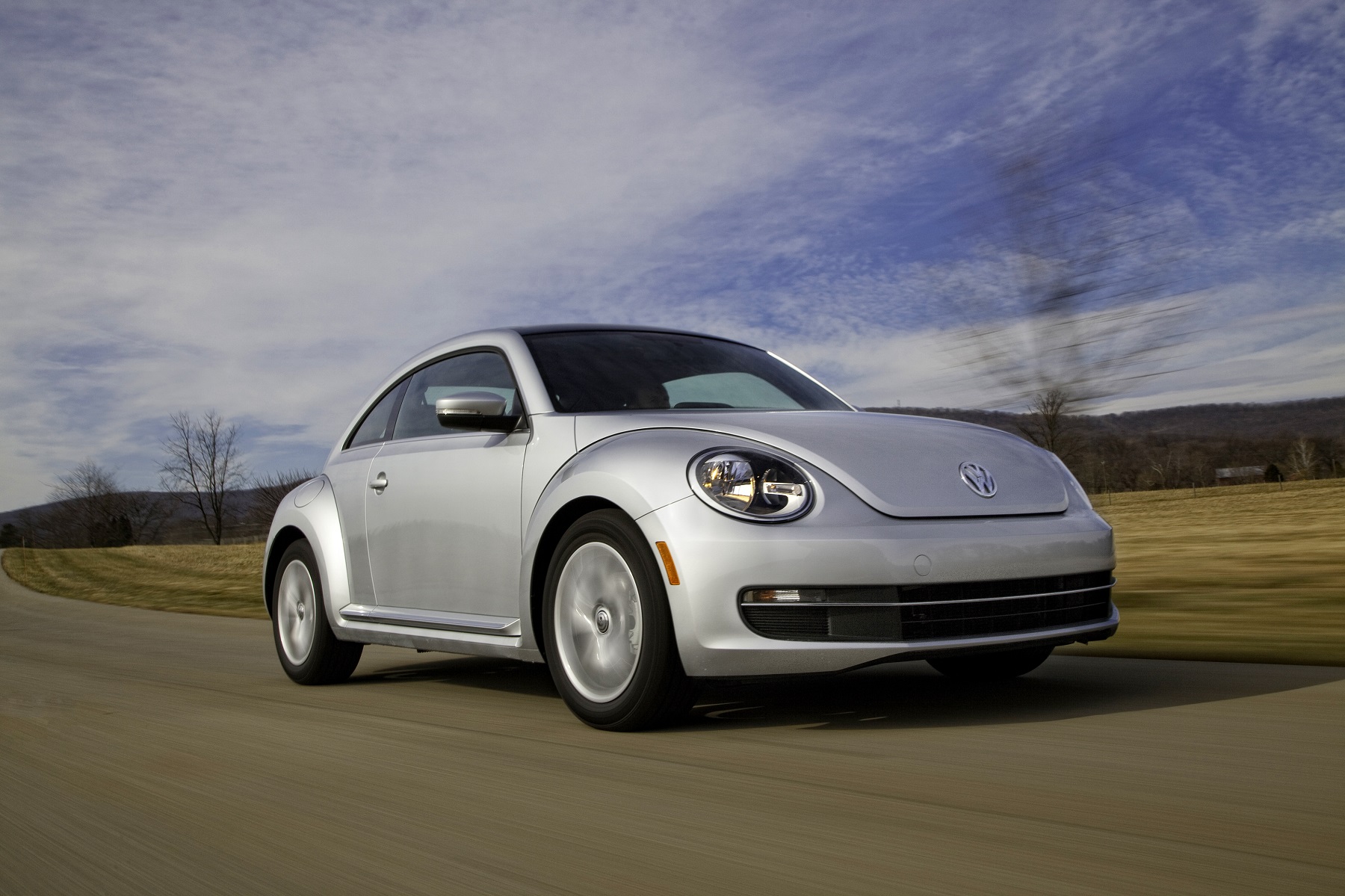 Manufacturer photo: The internationally beloved Beetle momentum continues into the 2013 model year with the launch of the frugal TDI Clean Diesel model.

This third-generation Beetle (launched last year) has now became an icon revisited, representing a modern interpretation of what has unquestionably become a classic automotive design.

The Beetle appears in a longer, lower (but still with plenty of head room) and wider form, with a noticeably sportier, and noticeably more masculine stance. In Hot Rod speak, it displays the image of having a chopped top and channeled body, yet delivering no compromise in its German engineering.

Inside, the interior design is as unique as it is unmistakable, and is very much a Beetle design, as is the exterior styling. The shape and use of color for the painted or carbon-look dashboards harkens back to the design of the first Beetle. Three round gauges are arranged in front of the driver (tachometer, speedometer, fuel gauge), delivering key information at a glance. A multifunction display is integrated into the speedometer, which is housed in the binnacle's central position. The steering wheel is designed with optional painted accents in the spokes depending on the equipment line.

The 2013 Volkswagen Beetle TDI Clean Diesel may well be the most frugal, fuel-efficient Beetle ever produced, with EPA estimated mileage of 28-mpg city and 41-mpg highway. The Turbo Beetle moves down the road powered by a 2.0-liter, turbocharged and intercooled, electronically fuel injected four-cylinder engine. The turbo delivers 200 horses at 5,100 rpm while generating 207 lb.-ft. of torque at 1,700 rpm. 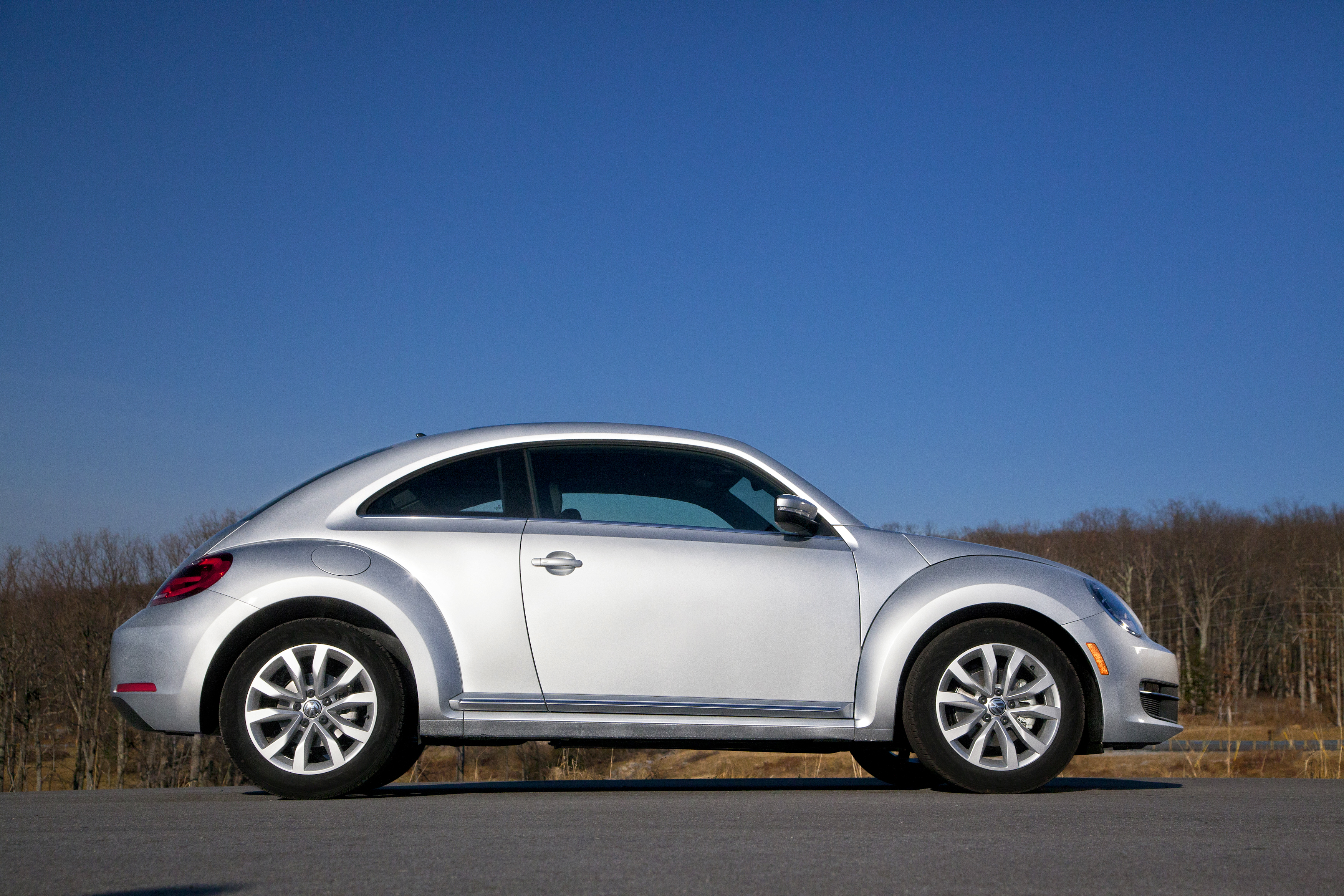 My test 2013 Volkswagen TDI Clean Diesel Coupe was equipped with the 6-speed manual gearbox and came with a base sticker of $23,295. The only extra charges were for the TDI Monster set of 4 mats, a heavy-duty trunk liner with CarGo Blocks, a First Aid Kit and the Destination charge, which combined to bump the final tally to $24,360.

My TDI coupe was certainly a joy to drive with its close ratio 6-speed manual gearbox, although with today's advancements in automatic transmission capabilities, I would personally opt for VW's DSG automatic with paddle shifters, which seems to offer the best of both worlds.

Acceleration off the line, with its turbocharged/intercooled Direct Injection four banger producing 236 torque, was impressive, effortlessly lighting up the front tires. The improved suspension delivers a flat, firm and stable ride quality, while remaining quite comfortable. Steering was positive, with a good on-center feel, and the responsiveness resulted in a nimble, athletic sensation overall.

The VW Beetle TDI Coupe is clearly a winner in its own right, but given my penchant for open vehicles, give me the Convertible version with the DSG automatic transmission for the ultimate Beetle.