Operating on a "to each their own" philosophy, Honda's best-selling Civic is a candy store in the compact car segment. Civic comes in two body styles, in six trims -- ranging from hybrid to high efficiency to sport performer models. 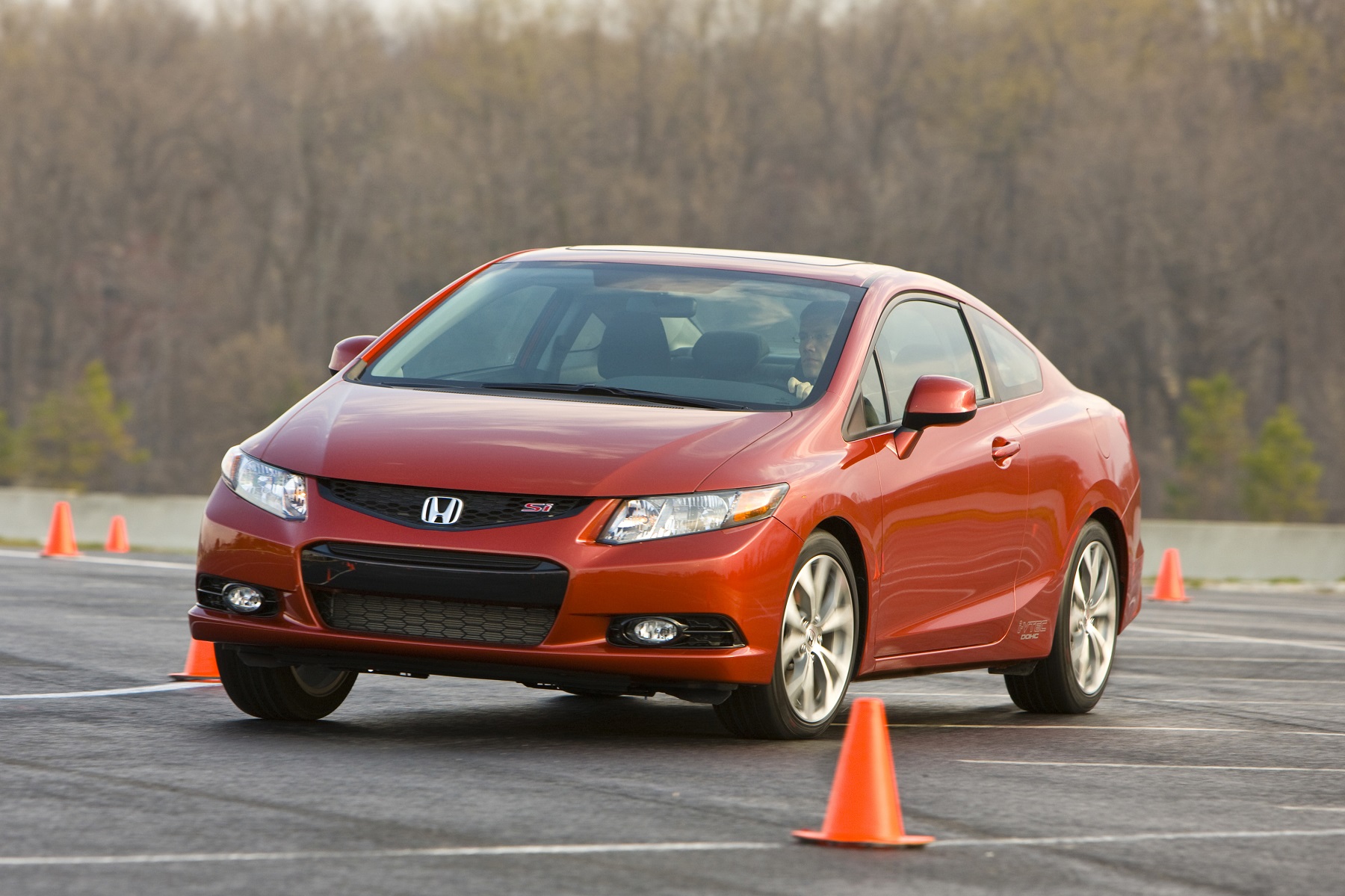 The Civic HF (High Fuel efficiency) and the Civic Hybrid each deliver more than 40 miles per gallon highway. Trims start at $17,965 with Civic LX, EX, EX-L, Si -- and there's even a Civic NG (Natural Gas).

The model that appeals to me the most -- because I thinks it's the best looking and best performing of the bunch -- is the Civic Si Coupe. I drove the manual gearbox model on an autocross course; a simulated road course and street drive with pleasing feedback (the automatic transmission is no longer available on the Si Coupe).

The Si features several exclusive parts over and above what is offered by Honda in the rest of the Civic stable. These things include an integrated rear spoiler; 17-inch performance tires mounted on specially styled, 5-V-spoke alloy wheels; unique front fog lamps with black painted garnishes; a high gloss black painted front upper and lower grille; a sport bumper treatment; special exhaust pipe finisher and a black painted rear diffuser. My recent test 2013 Civic Si Coupe had a base price set at $24,215.

The 2013 Civic Si with its 2.4-liter, 16-valve i-VTEC inline 4-cylinder is impressive in the delivery of its 201 horsepower at 7,000 rpm and generation of the 170 lb.-ft. of torque at 4,300 rpm. The acceleration rate is exhilarating, as moving through the gears of the close ratio six-speed manual gearbox prove smooth and precise. The transmission is specially optimized for the 2.4-liter engine, with the special i-VTEC indicator lighting up with the VTEC shift timing in each gear. Fuel economy is rated at 22 mpg city and 31 mpg highway. A "torque-full" sporty sound is terrific from both the engine and the exhaust. 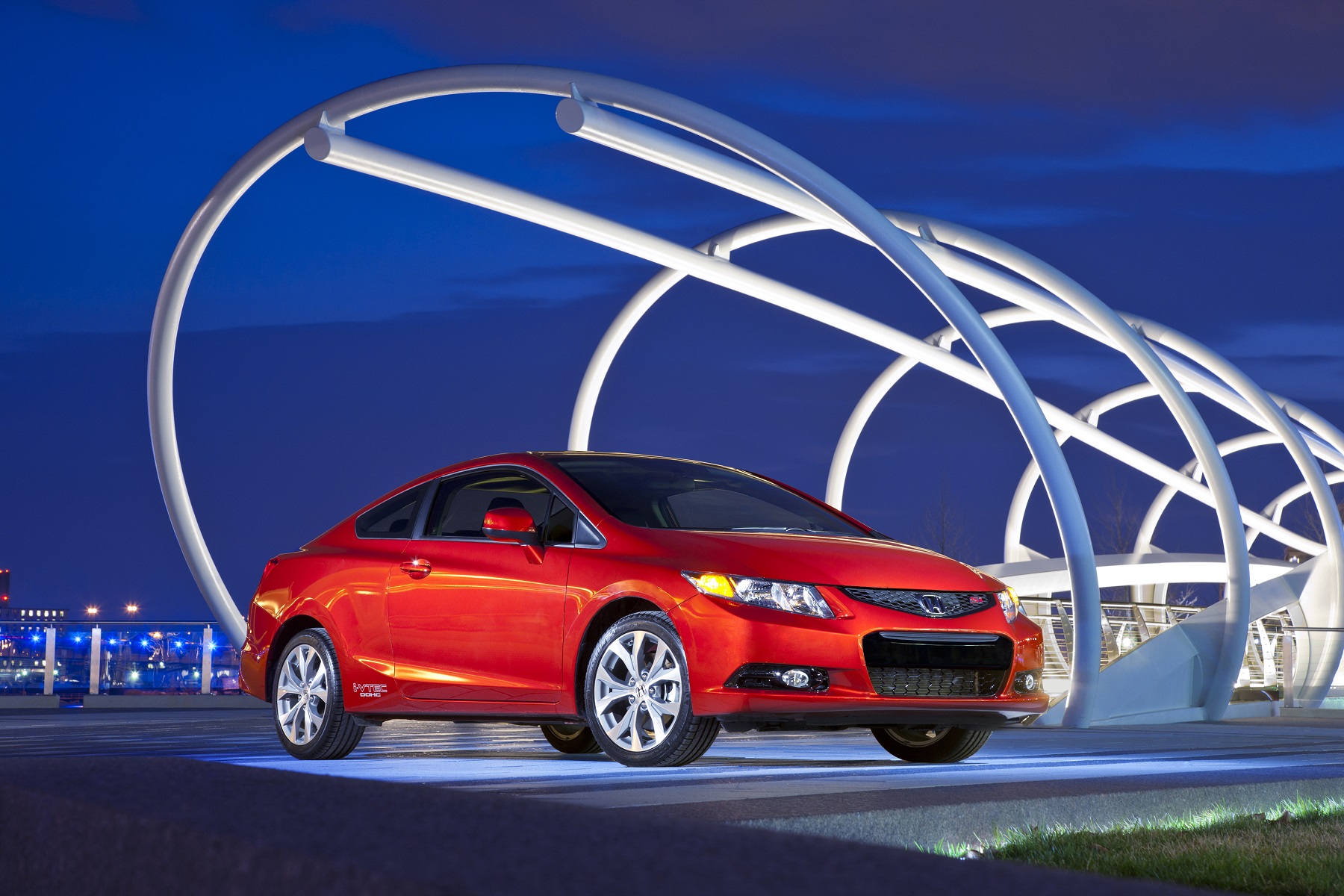 The Si Coupe is aerodynamically stable thanks to the exclusive aero parts that provide for superior lift and balance. Suspension settings are also exclusive for the Si model, resulting in the car's fine handling characteristics and comfortable ride quality. The motion adaptive Electric Power Steering is another contributing factor to both fuel economy and road manners.

In the event that one should grow tired of relishing the sweet engine and exhaust notes, the Premium audio system delivers high quality sound through its high power 360-watt, seven-speaker audio setup.

The Si Coupe appropriately sets itself apart from its other Civic siblings. Even the Intelligent Multi Info Display (I-MID) -- a really cool informational feature for all facets of the car's primary systems operation -- offers exclusive Si features, including the Power Monitor.

The Civic Si comes in a sedan version, too. It comes with most of the same exclusive features as the Si Coupe, however, it has two extra doors and I didn't fine it as sporty and attractive as a result.

The Civic Si Coupe looks is racier and more appealing than the rest of the Civic stable, presenting an overall image of sporty performance. The interior design direction showcases a sporty personal cockpit with visual devices that tend to generate a higher level of driving excitement and enjoyment. Features include an exclusive meter coloration and exclusive Si content such as an i-VTEC indicator Power Monitor, a Premium audio system, a sunroof and a 60/40-fold rear seat. Other standard fare includes: a leather-wrapped steering wheel with red stitching and an Si wheel emblem; metal, rubber-studded pedals; and an exclusive shift knob. The interior is executed in Black with an exclusive red-stitched, patterned seat fabric along with fabric covered door pads and faux carbon fiber trim accents.

The 2013 Civic Si Coupe, along with the rest of the Civic model offerings fulfills Honda's philosophy of "the will of the customer." If you're not able to find a Civic to suit your tastes and requirements in the compact segment, then you might just be impossible to please.