Find Your Credit Union
Saved Cars
0 n
Welcome Guest
RESOURCES > Stingray Convertible: For When It's Time to Move On

Stingray Convertible: For When It's Time to Move On

The all-new Corvette Stingray convertible is like three cars in one: It provides the comfort and functionality of a long-distance GT car, the connectedness and infotainment of a daily driver, and the acceleration, grip and braking of a capable track car. 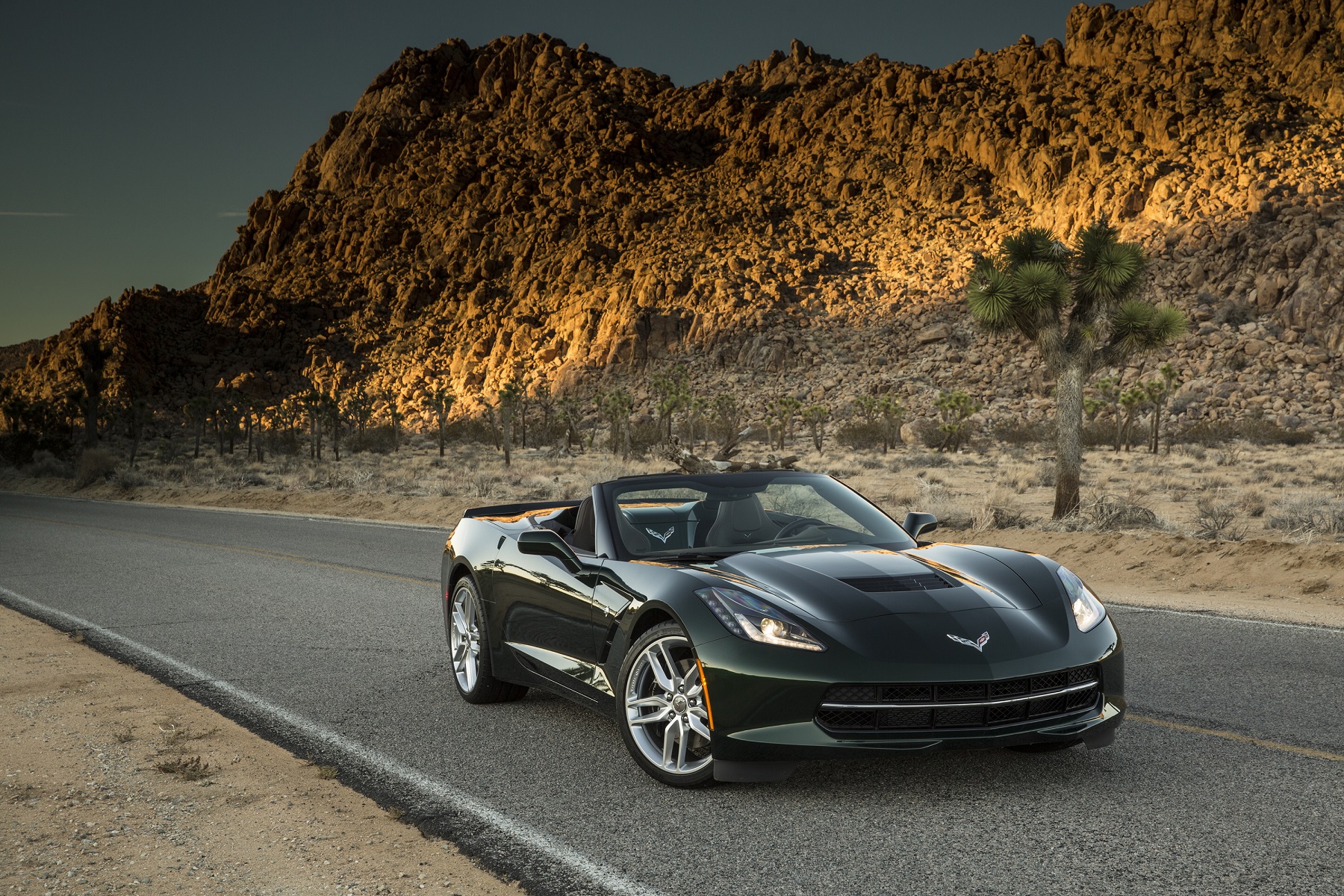 Nestled in an all-new aluminum frame is the most powerful and most efficient standard engine to be found in a Corvette to date. It is a 6.2-liter, 16-valve, pushrod V-8 with Direct Fuel Injection that produces 460 horsepower at 6,000 rpm, while developing 465 lb.-ft. of torque at 4,600 rpm with the available performance exhaust.

The engine sends its driving force to the rear wheels through either a new seven-speed manual gearbox with Active Rev Match technology via steering wheel mounted paddles, or via a six-speed automatic transmission with paddle shifters for manual gear changes. It is rated as the most efficient sports car on the market promising up to an EPA estimated 17 mpg city and 29 mpg highway. No other car offers more than 455 horsepower and greater than 29 mpg on the highway. Despite the efficient fuel economy, the Corvette Stingray is capable of rocketing from 0-60 mph in a mere 3.8 seconds.

I drove the Stingray convertible with the seven-speed manual transmission featuring Active Rev-matching in and around the mountains in Palm Springs, Calif. The base price of the Laguna Blue tint coat convertible with was set at $58,800 with the Z51 Performance Package.

Regardless of how it's topped, the 2014 Corvette Stingray is clearly the best production Corvette ever. Essentially, it is engineered to race, but is also built for on-road driving enjoyment, boasting a better power-to-weight ratio than the Audi R8 and Porsche 911 Carrera. 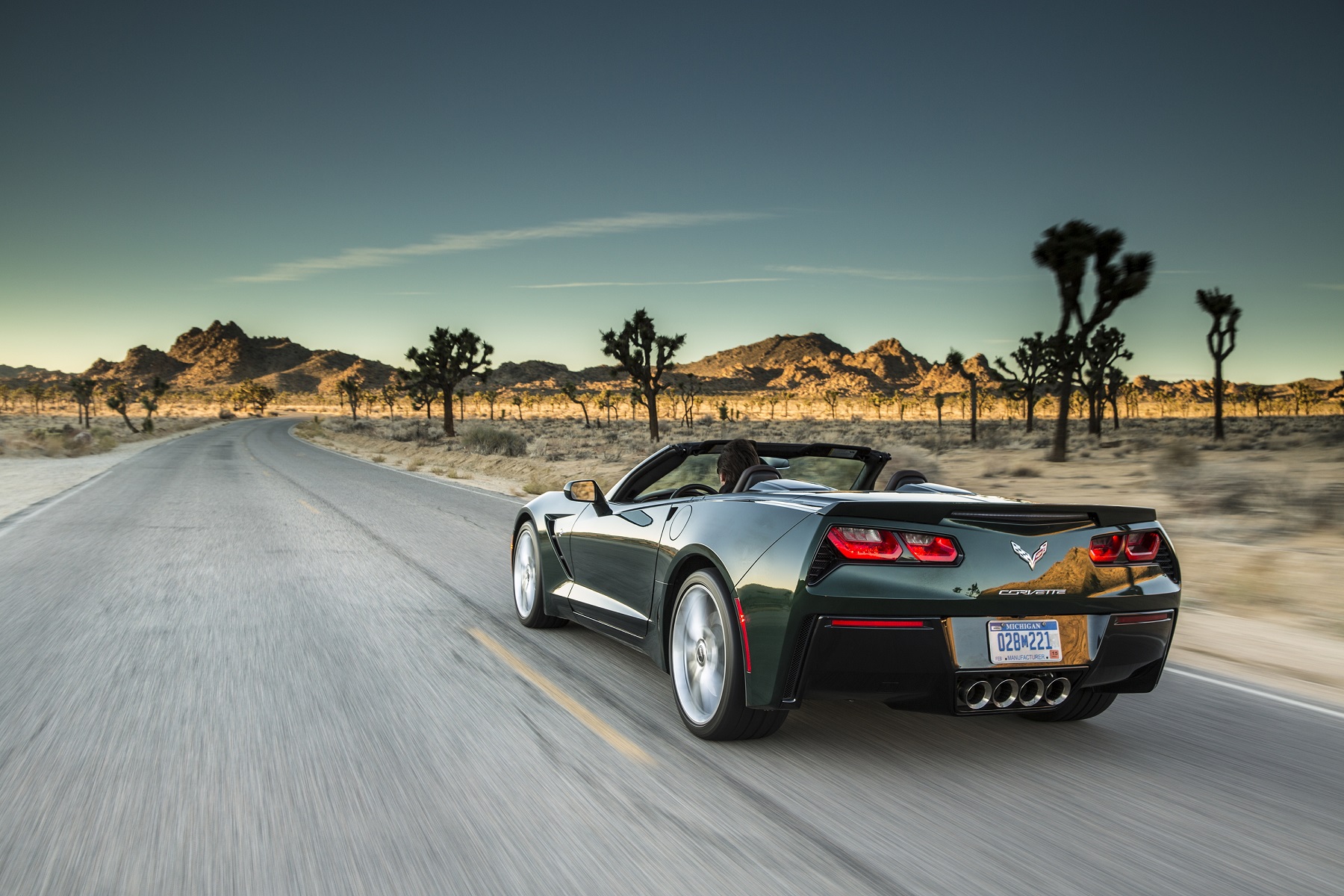 The new Stingray behaves in a docile and civilized manner under ordinary cruising, but can be quite the screamer when poked and prodded. It handles with both an athleticism and preciseness never before available in a Corvette. It rides comfortably when simply cruising, but may be firmed up for track exercises or more aggressive driving when the mood strikes.

Photographs do not do the Stingray justice -- it is not only a purposeful and functional design, but it is also stunningly gorgeous in either coupe or convertible form. Yes, there are some Corvette purists who feel that the new headlight and taillight treatment violates the heritage and purity of the iconic sports car, but I disagree.

Everything about this seventh-generation 'Vette represents a step up. I have my past favorites too, such as the 1953 model or the 1957 four-speed, fuel-injected model; another early favorite is the 1962 Corvette, but it's clearly time to move on.

The Corvette Stingray two-seat convertible is visually provocative and stimulating with styling that is not only elegant, but functional as well. Chevrolet's design goal was to make a bold statement, embracing the car's advanced technology, while enhancing its overall performance from the wind tunnel to the track. It breaks new ground, while remaining true to elements that define a Corvette as a Corvette.

No single detail has been repeated from previous generations, though the new 2014 Corvette Stingray retains its distinctive profile defined by a long dash-to-axle ratio -- a low, lean proportion that's emphasized even more on the convertible. The greenhouse suggests the canopy of a fighter jet with dual-element taillamps. Designers built on this foundation, a form vocabulary from two dissimilar sources: aerospace and nature.

The interior combines fine materials and craftsmanship with advanced technologies that contribute to a more connected and more engaging driving experience. Each of the interior's features and details are designed to enhance the driver's connection to the car, beginning with the fighter jet-inspired wraparound cockpit and continuing with the smaller (14.1-inch) diameter steering wheel, more supportive seats, and high-definition, configurable LED instrument panel.

The Stingray convertible features an indulgent interior, where all surfaces are covered with premium, soft-touch materials, including, depending on the trim level, Nappa leather, aluminum, carbon fiber, and micro-suede.