The popular commercial-use Transit Connect Wagon is what Ford affectionately dubs the "Unminivan." The new Ford Transit Connect drives like a car, features the flexibility and versatility of a crossover or SUV, and possesses the ability to haul the payload of a pickup truck.

The 2014 second-generation Ford Transit Connect Wagon comes in two forms: the utilitarian panel van, and the "Unminivan" wagon. We'll cover the wagon here, which is available in both a five-passenger Short Wheelbase (SWB) and seven-passenger Long Wheelbase (LWB) configuration with third-row seating. Both the second- and third-row seats fold flat. The LWB version adds 15.8 inches to both the wheelbase and overall length, with the extension (8.9 inches) appearing in the side door area. The LWB models outweigh the SWB models by 349 pounds.

The Transit Connect Wagon consists of three trim levels -- XL, a more upscale XLT model, and the top-of-the-line Titanium model -- all available with either a rear liftgate (non-power) or symmetrical, side-hinged double rear doors (with the exception of the Titanium models which only come with the liftgate).

Both engines mate to a six-speed automatic transmission with overdrive that push motive force to the front wheels. LWB models are only available with the 2.5-liter engine. Towing capacity is rated at 2,000 pounds when properly equipped with the $295 tow package. Maximum payload is 1,270 pounds. Suspension componentry consists of independent MacPherson strut with a stabilizer bar up front, and a twist-beam axle with a stabilizer bar in the rear. 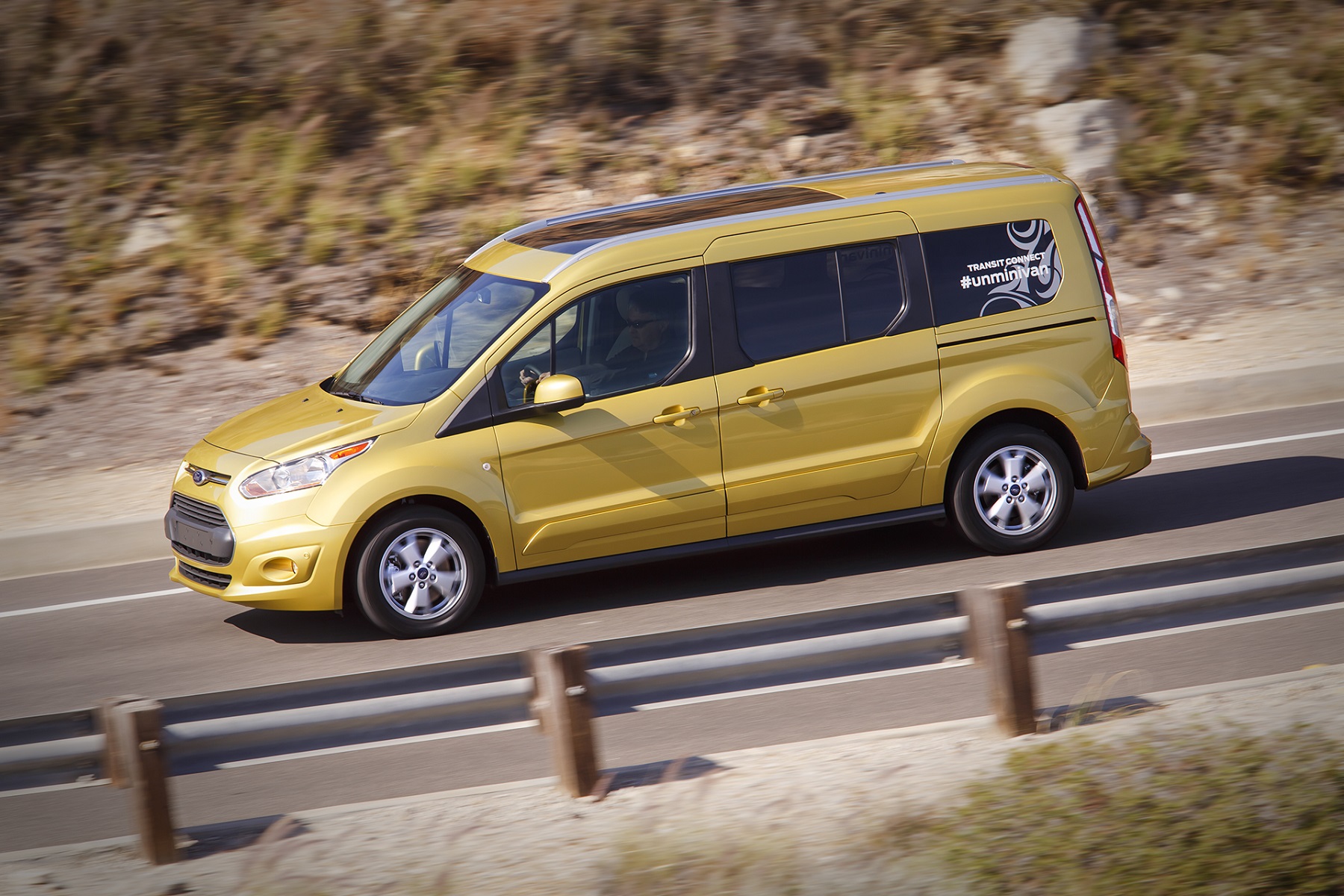 In terms of its visual appeal, the Ford Transit Connect Wagon serves up a completely new exterior styling that reflects Ford's current design DNA. It is long, low, and sleek with pronounced flared wheel wells and soft-edge character lines all around. Outward visibility is ideal thanks to a large open greenhouse glass area, featuring blacked-out B and C pillars for a floating roof effect.

During the press introduction, I was able to pilot Ford Transit Connect Wagons with both engine variants and both wheelbases. To begin with, I dove a Titanium model, 2.5-liter, four-cylinder-powered LWB wagon through downtown Los Angeles traffic, up Pacific Coast Highway and over Topanga Canyon Road. It wore a Silver Metallic exterior finish and came with a beige interior at $29,000.

For the return leg, I drove an XLT trim, short-wheelbase model powered by the turbocharged 1.6-liter. It sported a Burnished Glow exterior finish, which was complemented by a black and charcoal cloth interior, base priced at $24,525.

The 2014 Ford Transit Connect Wagon rides with the comfort of a car, with all the conveniences. It handles with the agility of a car as well, staying flat and stable over SoCal's twisty mountain roads. Potholes and ruts posed no problems either with the wagon's compliant ride quality.

The 2.5-liter four-cylinder did well with satisfactory response in handling the LWB Titanium model. The XLT with the 1.6-liter turbocharged EcoBoost engine did considerably better with its added power and responsiveness. It was more fun to drive, especially on the narrow, curvy Sunset Boulevard.

In addition to the outstanding outward visibility, the boxy shape of the Ford Transit Connect Wagon provides plenty of head and legroom -- even for a fellow 6'7" journalist attending the program. Headroom is 46.8 inches.

The Transit Connect Wagon is based on Ford's global C-1 platform, which is the basis for several other current Ford models. The Wagon's versatility and flexibility is most impressive, with the LWB models providing 105 cubic feet of cargo space with the second- and third-row seats folded flat.

This latest iteration of the Transit Connect is an ideal transport for both family adventures and commercial activity. My personal favorite is the SWB with the turbocharged, 1.6-liter EcoBoost engine, which provides a more responsive, fun-to drive quality without sacrificing any of the wagon's versatility.

As for it being an "Unminivan," its makeup and categorization is really in the eyes of the beholder. The traditional minivan sliding side doors and varied seating configurations pretty much qualify it for minivan credentials, even though its actual size and form, not to mention affordability, make it a desirable vehicle, whatever you choose to call it.