The smart fortwo is most commonly referred to as "cute," though I normally avoid describing any vehicle as such. There are even those who irreverently refer to the micro-car it as a "clown car." 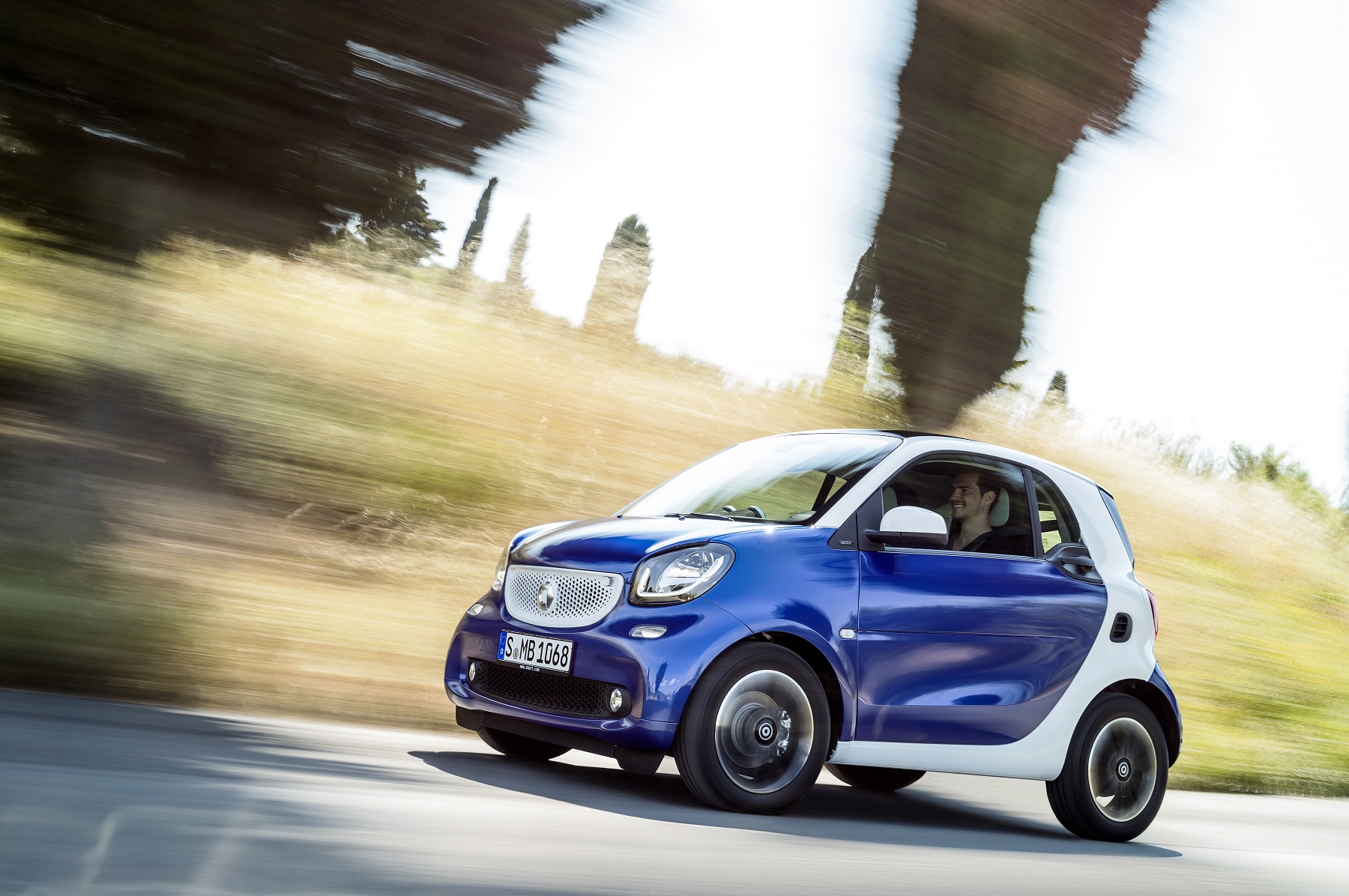 But, in truth, the smart fortwo displays a futuristic Jetson-like styling, and despite its reduced dimensions, is surprisingly big on interior space, as well as comfort and features. It is definitive proof that good things come in small packages.

The innovative two-material construction concept consists of a Tridion safety cell crafted from high-strength steel and colorful, interchangeable body panels made of premium, dent-resistant plastic. Projection headlamps with incorporated indicators add to the little car's futuristic look. The front, which appears as if it might house the engine, does not. Nor does it provide trunk space. Storage for one's personal gear is behind the seats.

All smart fortwo models are rear-wheel-drive, except the electric-drive version. There are now four levels of trim for smart fortwo: pure which starts at $14,650; passion, starting at $16,140; prime, beginning at $17,490; and the top-of-the-line proxy, with a starting price of $18,480. Add $990 to step up to the six-speed dual-clutch transmission and $750 for delivery and destination charge.

I've driven all examples of the smart fortwo -- Coupe and Cabriolet, gasoline- and electric-powered. My latest test vehicle was a smart fortwo pure coupe, powered by a 0.9-liter, 12-valve, turbocharged three-cylinder engine with electronic fuel injection coupled to a six-speed automated dual clutch "twinamic" transmission with steering-wheel-mounted paddle shifters. The new engine produces 89 horsepower along with 100 lb.-ft. of torque. 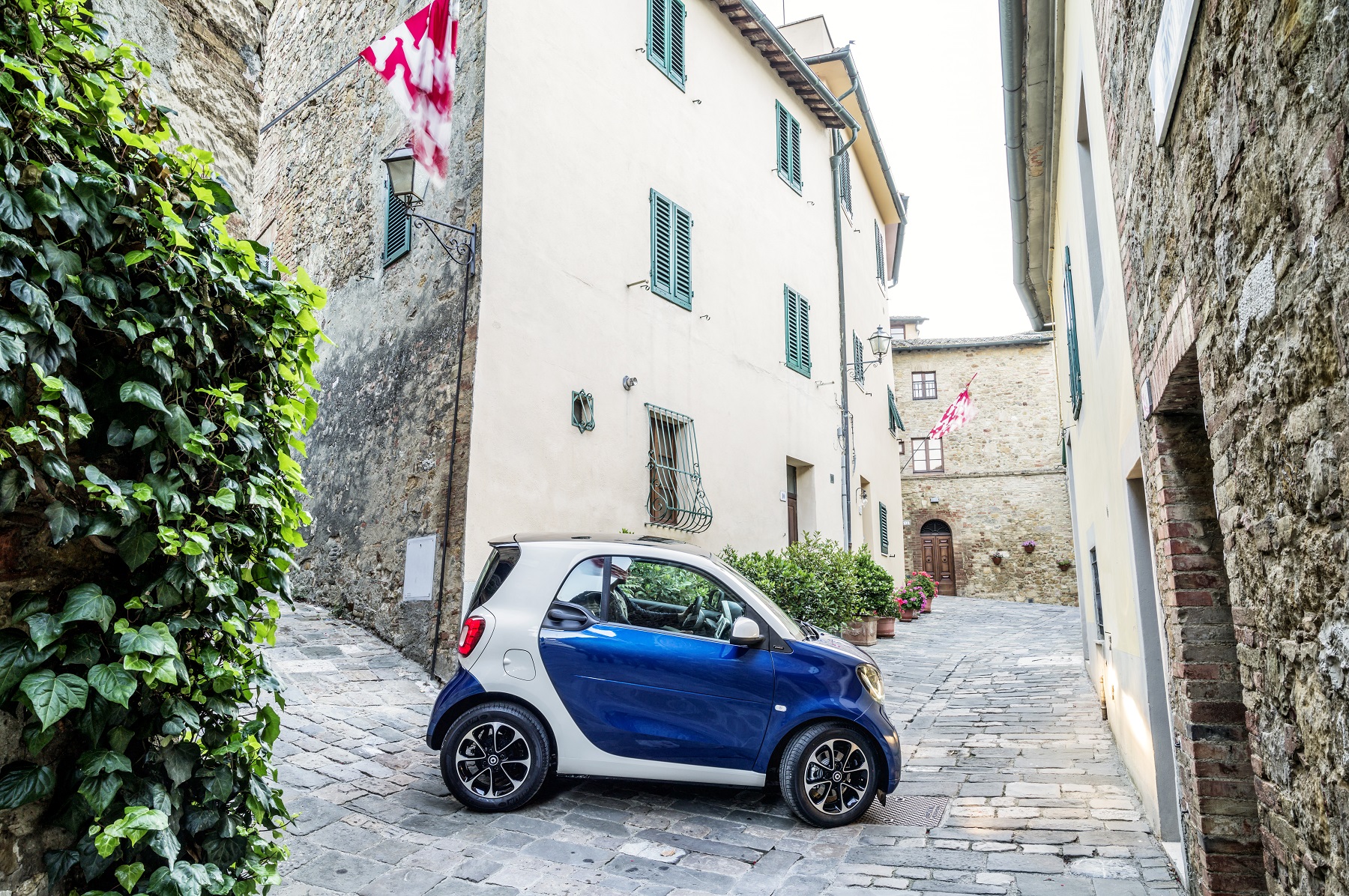 Its exterior was sprayed in Deep Gloss Black, with the interior done in black as well. The base price was set at $14,650, while the final total came to $19,830 after including the optional six-speed automated dual clutch transmission, P11 Prime equipment group; and Sport package with Sport suspension, 16-inch alloy wheels and paddle shifters; and the destination charge. Each trim level adds progressively more features and equipment.

The all-new 2016 Smart fortwo has a lot of things going for it: visually appealing to most observers, it's economical (with an EPA estimated 34 mpg city and 39 mpg highway), it's fun to drive, and it fits easily into minimal parking spaces (two will fit into a conventional parking space).

Acceleration is not blistering, of course. But while the earlier automated manual transmissions took some getting used to, being similar to BMW's SMG gearbox, with a bothersome lag between gear changes, this new six-speed version automatic is much smoother, with no negative issues. At maximum freeway speed, crosswinds can present cause for concern due to the car's squared profile and short wheelbase.

The interior space and amenities are surprisingly plentiful and user-friendly, and the ride quality is compliant enough, but potholes should be avoided if possible. Handling is responsive and positive. Parking, though requiring less space as mentioned earlier, requires closer attention, because the exterior planes are difficult to judge, lacking outward reference points.

Safety concerns are generally a major consideration given the size and construction, but after viewing footage of several crash and roll-over tests, the smart fortwo came through with flying colors, bolstering enough confidence to entertain purchasing one personally. Kudos for the playful, futuristic appearance and appeal and the surprising amount of functional interior space. The gasoline-powered smart fortwo in pure coupe configuration is less than half the price of the electric-drive version, making gas the logical choice.

The 2016 smart fortwo is now longer, has a wider track, but with a reduced turning circle (22.8 feet from curb-to-curb), is driven by a smaller engine that produces more power and torque, and it's faster. Design-wise, there's a new pronounced shoulder line and the twin-section tailgate is a highly popular feature.

In the final analysis, the smart fortwo delivers on fun, practicality, fun, economy, and once inside, one forgets how petite it really is, as it feels exceptionally roomy, not to mention more comfortable than earlier examples. Oh, and it's quite versatile and FUN-ctional.