The 2016 Toyota RAV4 represents a mid-cycle refresh and introduces a new SE grade, plus an available hybrid model on various trims or grades. 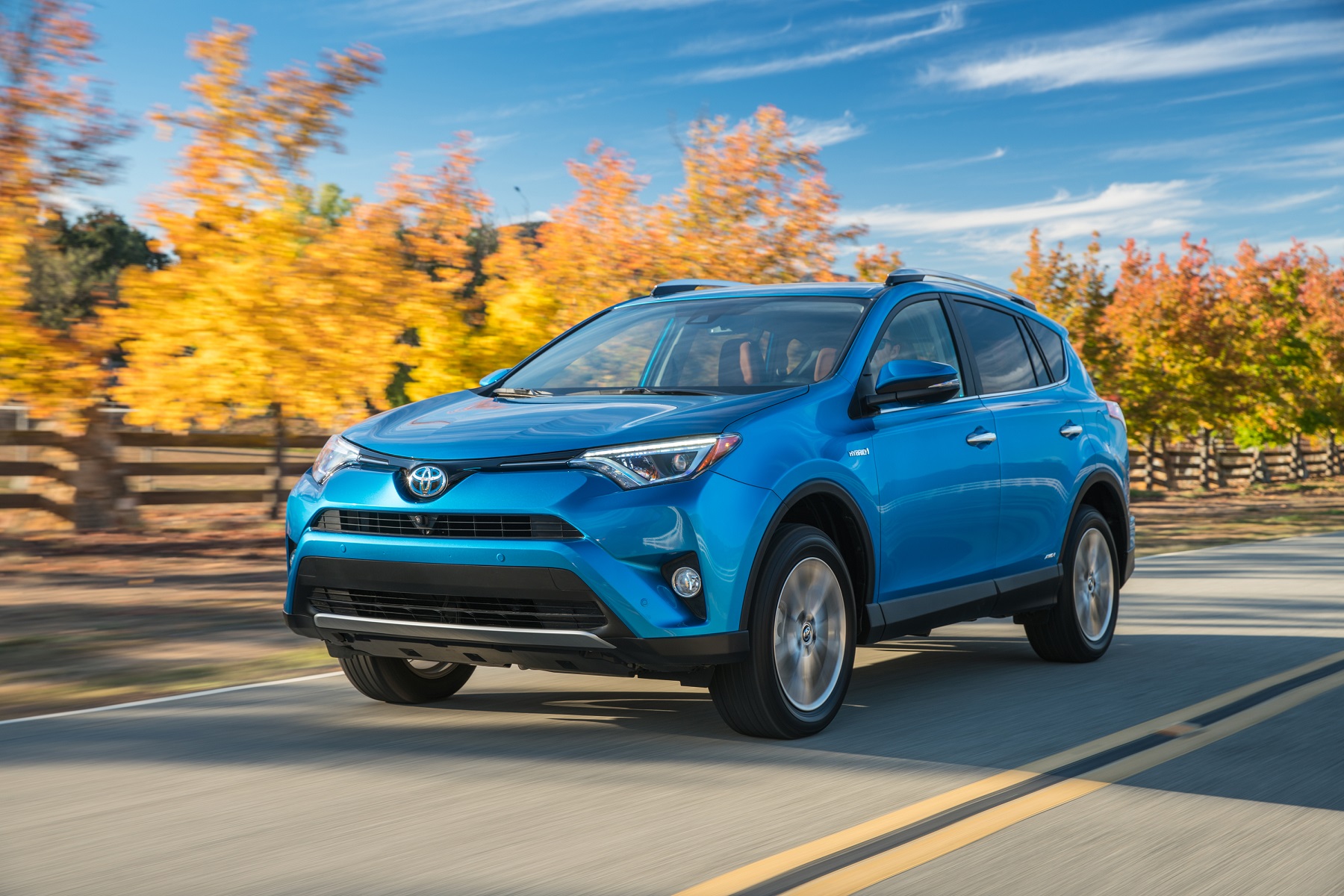 The 2016 RAV4 lineup displays a dynamic exterior featuring a sleek roofline, boldly aggressive character lines, and a streamlined silhouette. The form begins with Halogen projector beam headlights, a low sloping hood, and athletically sculpted front and rear fenders, while the arc of the roofline leads rearward to the prominently styled taillamps.

A functional roof spoiler not only extends the roofline, but also features a brilliant LED center brake light. The updated RAV4 promises to deliver balanced performance and capability, along with impressive fuel economy and class-leading cargo capacity in a strikingly designed form, along with an extensive inventory of standard features and amenities.

In a significant departure from the original RAV4's heritage, today's RAV4 has finally moved from its original side-hinged rear door to a more convenient roof-hinged lift gate; the rear door-mounted spare has been replaced by a space-saver spare that's stored beneath the rear cargo floor.

As on other recent Toyota vehicles, the engineering team concentrated on improving aerodynamics by incorporating small vortex generators molded into the taillight cases and near the A-pillar bases. Undertrays beneath the passenger cabin aid in smoothing and controlling underbody airflow.

The 2016 RAV4 Hybrid is available in three levels of trim: the base LE, a more upscale XLE, and the flagship Limited model. All Hybrid models are powered by a 2.5-liter DOHC, 16-valve inline four-cylinder gasoline engine with dual VVT-I and electronic Toyota Direct Ignition with sequential fuel injection. Additional power is created by three electric motor generators that charge the batteries, drive the front and rear wheels, and regenerate motive force during braking.

The engine develops 112 horsepower at 5,700 rpm, while generating 206 lb.-ft. of torque at 4,100 rpm; all together, the hybrid system generates 194 net horsepower. When needed, the Permanent Magnet AC Synchronous Electric Motor contributes an instantaneous 105 kW/50kW at 4,500 rpm, along with 199 lb.-ft. of torque.

Motive force is delivered to the all-wheel drive system with Dynamic Torque Control through an electronically controlled Continuously Variable Transmission with intelligence (CVT-i). The Hybrid system is supported by a sealed Nickel-Metal Hydride Battery Pack with a nominal voltage of 244.8 V (204 cells, 1.2V/cells) with a 6.5 ampere hour capacity and 650 volts of maximum system voltage.

The RAV4 Hybrid is tailored to meet the needs of the compact SUV or crossover market that it originally created. In addition to the hybrid system, it offers state-of-the art in-cabin technologies.

The RAV4 Hybrid's interior offers a premium appearance, showcasing soft-touch surfaces and accents along with driver-focused controls. The asymmetrical dash panel is driver-centric with both primary and secondary controls within easy reach. On the passenger side, a smoothly flowing, scalloped dash panel creates an airy feel to the cabin. 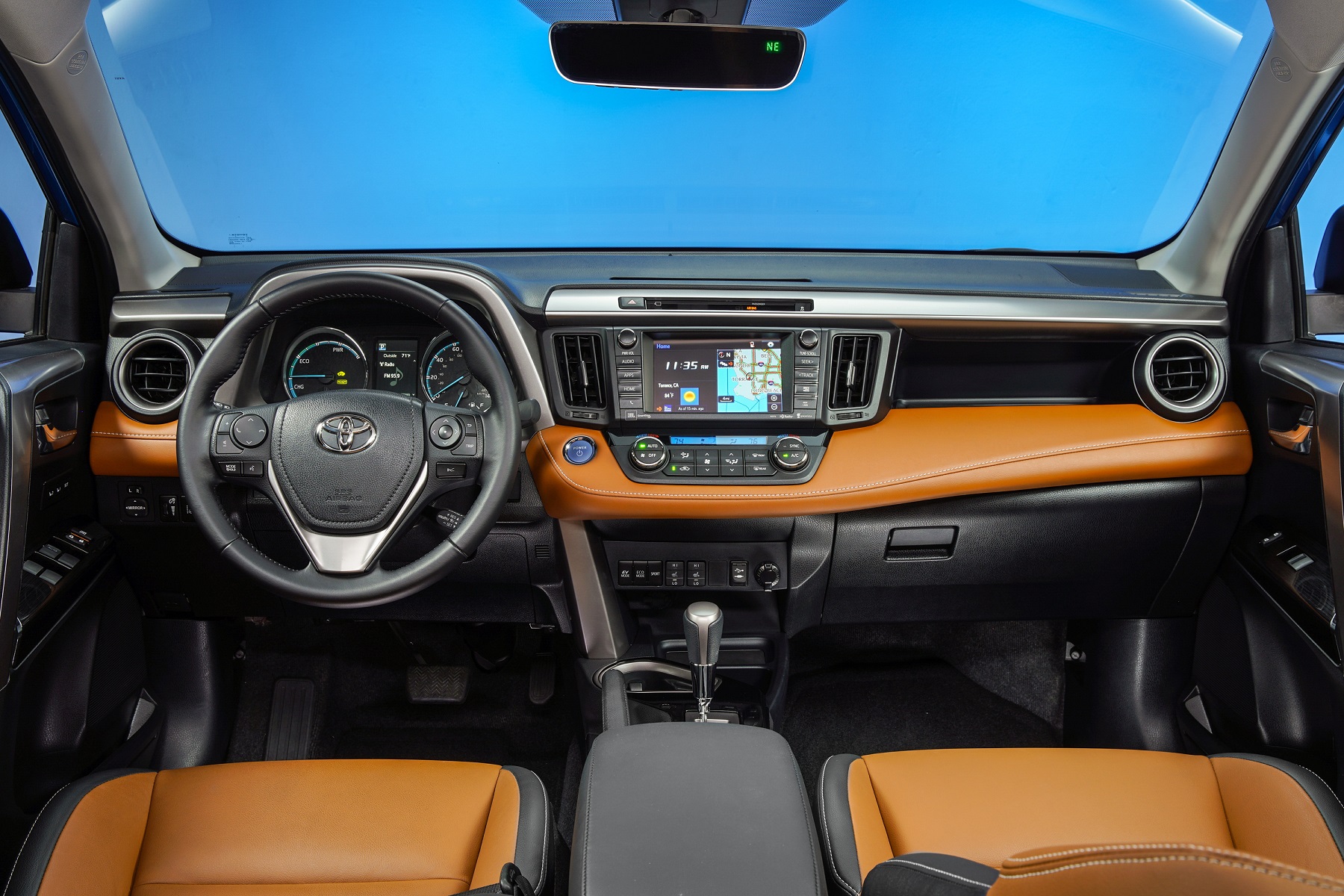 My test Toyota RAV4 came in hybrid Limited trim with a Blizzard Pearl exterior finish and a Charcoal interior; as configured with front-wheel drive, its base price started at $28,370. The final amount came to $29,120 after adding the destination charge.

The 2016 Toyota RAV4 Hybrid Limited, while remaining true to the original in terms of concept and purpose, is a vastly improved and much more attractive vehicle entering its fourth generation.

There are obviously those who will complain about the lack of a V-6 powerplant; in reality, the 2.5-liter four-banger delivers more than enough power, with the advantage of greater fuel economy. My FWD tester's EPA ratings are 34 miles per gallon city and 31 mpg highway. The ride quality is extremely stable and the handling characteristics lean to the sporty side of the equation.

This Toyota RAV4 Hybrid is a gem of a crossover that reflects the incorporation of customer input, resulting in a vastly improved vehicle over the original with the enhanced efficiency of a hybrid system.