The 2017 Kia Soul Turbo has upped its level of personality for the new model year, adding a 1.6-liter turbocharged engine to its lineup. The new Kia Soul Turbo isn't radically different in its design form, which some refer to as "cute."

Manufacturer photo: Kia adds a 201-horsepower turbocharged engine to one of its best-selling, beloved vehicles

The 2017 Soul is better looking and presents a new way to roll, with a modest freshening of its iconic design form. Several styling cues were taken from the two-door concept "Track'ster" vehicle that recently made the auto show circuit.

Its interior has been refined, and its cargo volume has been increased by up to 24.2 cubic feet. Ingress and egress has been improved along with reductions in noise, vibration, and harshness.

The 2017 Kia Soul continues to be offered in three levels of trim: Base; Plus (+), and Exclaim (!). All are available in a vibrant and playful color palette with names like Solar Yellow, Kale Green, and Inferno Red. Sporty new wheel designs also contribute to its dynamic, funky "boxy" car styling. 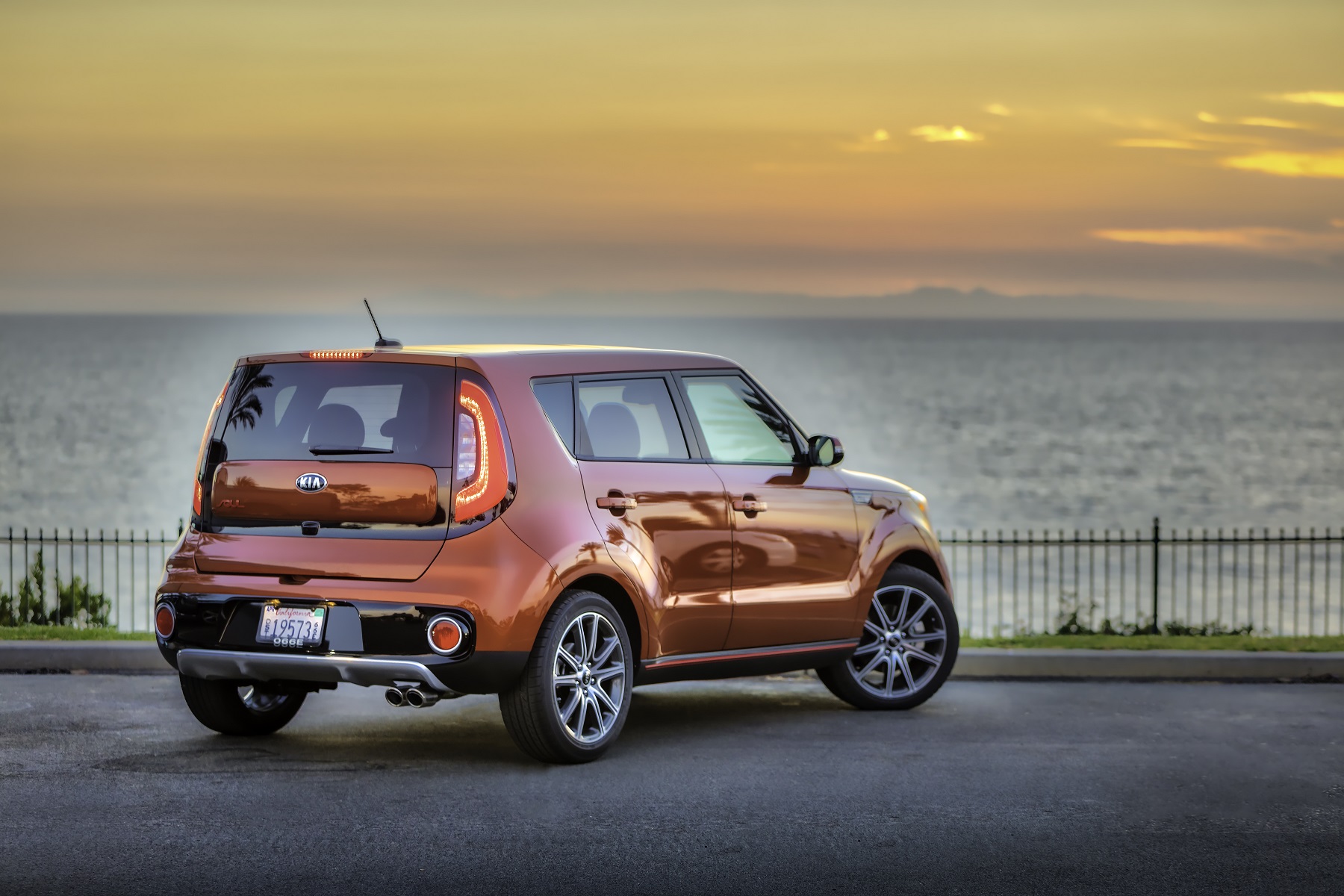 The instrument cluster sports deeply recessed gauges, matching sculpted circles in the door panels around the power windows and door locks. The center console features a round gearshift knob and push-button start (its location exclusive to Soul in the Kia lineup). The front-door-mounted speakers mirror the circular, high-mounted "floating" tweeters and utilize available LED-string light technology to create a ripple effect, with red-hued mood lighting.

The steering-wheel-mounted controls are housed in Soul-exclusive circular groupings along the lower spokes with the buttons for the audio system and trip computer falling readily to the thumbs, enabling the driver's hands to remain on the wheel at all times.

Soul's instrument panel offers an available 8-inch touch screen, as well as UVO eServices, Kia's second-generation infotainment and telematics system. Positioned side by side for the first time in a Kia vehicle, the audio/video and optional navigation controls are viewable on the home screen. Kia says combining the most-accessed ancillary controls on a single screen helps to reduce driver distraction and improves overall functionality and ease of use.

The 2017 Kia Soul is built on a stiffer chassis than before, and the location of the steering box results in an on-center feel. Shock absorbers on the torsion bar rear suspension are now turned vertically and positioned at an angle, allowing for better suspension travel, and enhanced ride comfort.

Powering the new Soul are now three transversely mounted front engine variants: the Base model receives a Gamma 1.6-liter, DOHC, 16-valve gasoline direct injection, inline four-cylinder that delivers 130 horsepower along with 118 lb.-ft. of torque; while the NU engine powering the Plus and Exclaim models is a 2.0-liter four-banger with horsepower rated at 164 and torque rated at 151 lb.-ft.

All engines are tuned to provide optimum low-end torque, and power reaches the front wheels with the base 1.6-liter engine mated to a six-speed manual transmission as standard, or to an optional six-speed automatic. The Plus and Exclaim models are available exclusively with the six-speed automatic transmission with sportmatic and active Eco, except in the case of the Turbo model, which changes gears through a seven-speed dual-clutch automatic.

My test 2017 Kia Soul was in Exclaim trim, powered by the 1.6-liter turbocharged engine mated to the seven-speed transmission. The exterior was sprayed Inferno Red metallic and came with a black and gray houndstooth cloth interior and piano black trim accents and orange double stitching. The base sticker read $22,650, while the final price climbed to $27,620 after adding for the panoramic sunroof, technology package, floor mats, and inland freight and handling charge.

The 2017 Kia Soul Turbo in Exclaim trim is a blast to drive while still providing practical transportation in a package that displays a whimsical, yet stylish flair. Acceleration is responsive with some noticeable turbo lag under load, but when the spirit kicks in, smiles are prone to erupt. And -- despite having 37 more horsepower than the 2.0-liter-powered model and 71 more horses than the base 1.6-liter model -- it beats them both in EPA fuel economy, promising 26 mpg city and 31 mpg highway.

Speed-variable electric power steering delivers good on-center feel over twisty backroads. The ride quality is comfortably compliant, but the boxy form offers a substantial target for 45- to 50-mph crosswinds when crossing a bridge like San Francisco's Golden Gate span. The seven-speed DCT automatic shifts nicely, and is a worthwhile replacement for the manual gearbox.

There are plenty of thoughtful storage nooks and crannies, along with cool, quirky features such as the audio speakers that flash mood lighting to match the bass notes. Rear-seat passengers will find sufficient space, even behind tall front-seat occupants. Android Auto and Apple CarPlay infotainment integration are standard on all cars with the 7.0-inch touchscreen. A larger 8.0-inch unit comes as part of an optional package that also includes two additional USB ports and navigation.

The Kia Soul is proof positive that it's cool to be square. Add the squarely good looks to the 10-year/100,000-mile limited powertrain warranty and 5-year/60,000 mile 24-hour roadside assistance program, and the Soul on any level provides a hip, value-packed compact ride.