Subaru's Impreza lineup for the 2017 model year is all-new, and has grown in stature, quality, and efficiency. The 2017 Subaru Impreza comes in two body configurations: a four-door sedan and a five-door hatch. 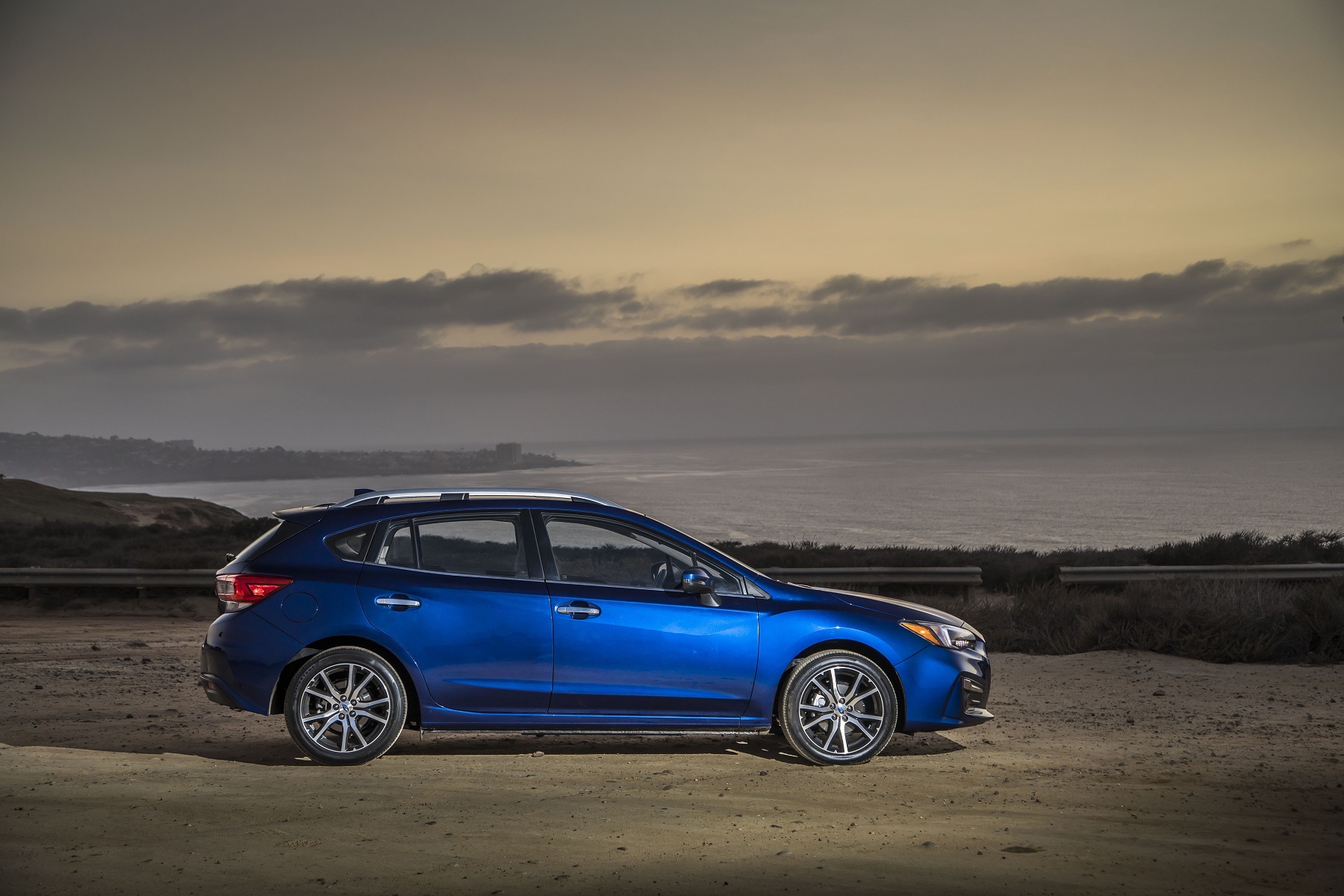 Both body forms represent the debut of Subaru's Global Platform architecture, featuring unitized body construction, which will underpin a variety of Subaru vehicles, including hybrids, to come in the future. Both body styles ride on a 1-inch-longer wheelbase (105.1) than the outgoing Impreza, and both are 1.6 inches longer overall (182.1 inches for the sedan and 175.6 inches for the five-door). The new platform increases the rigidity of the body structure by more than 70 percent, which provides a significant improvement in straight-line stability, agility, and ride comfort, while also reducing NVH.

All are powered by a 2.0-liter, 16-valve Boxer four-cylinder engine, delivering more horsepower than earlier versions -- 152 (vs. 148), while the torque produced remains the same -- 145 at 4,000 rpm, thanks in part to the implementation of direct injection. EPA estimated fuel economy is 28 mpg city and 37 mpg highway -- an improvement of 1 mpg for both city and highway ratings over the old engine.

Motive force is geared through a Lineartronic CVT with low shift mode for 2.0i base; or a seven-speed manual shift mode CVT with paddle shift control switches for Premium, Sport, and Limited models, and is delivered to all four wheels via Subaru's Symmetrical all-wheel drive -- an active AWD system, with an electronically controlled variable transfer clutch. 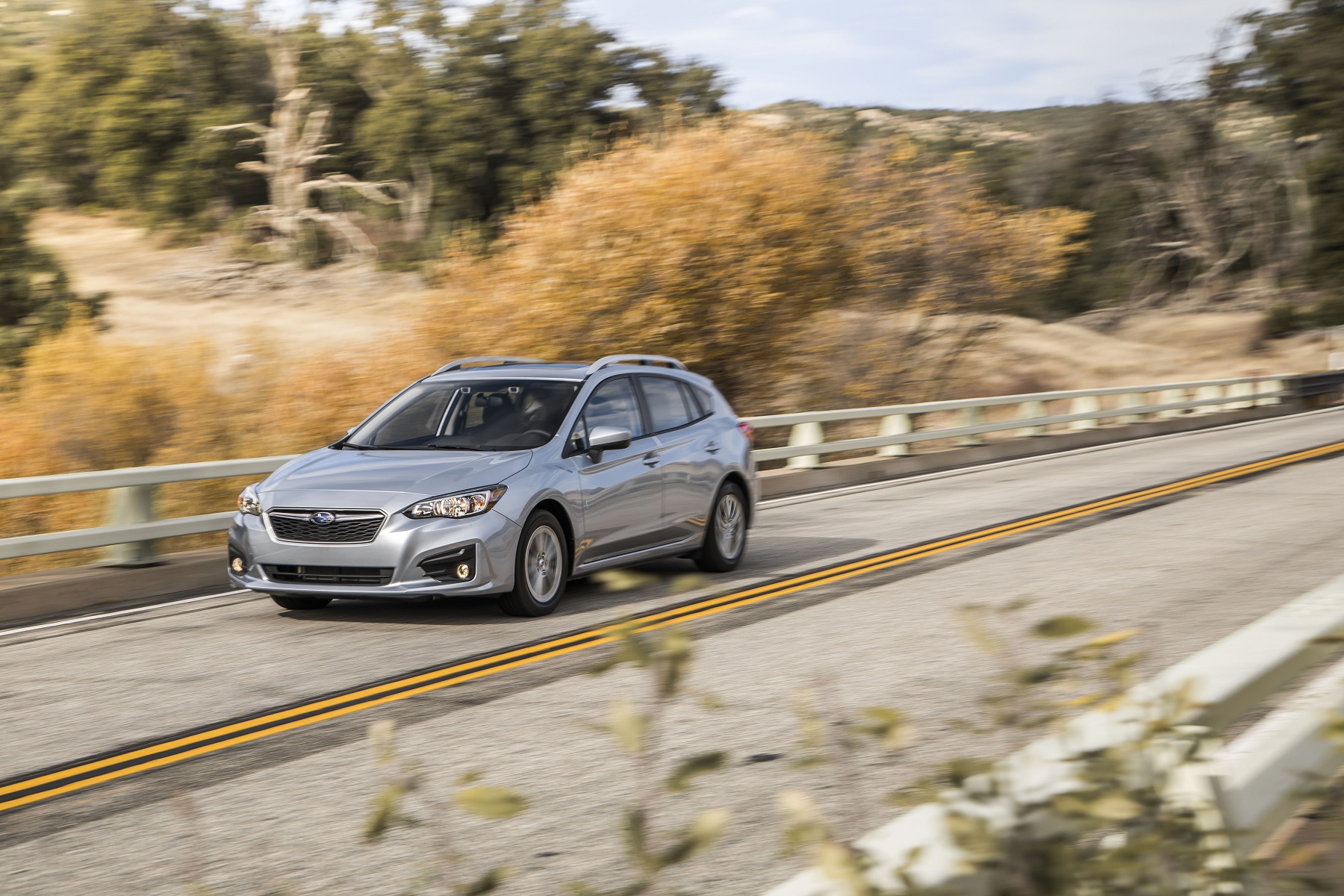 Visually, this fifth-generation Impreza debuts Subaru's new design language, featuring the marque's signature hexagonal grille and "hawk-eye" headlamps up front and a sculpturally more elegant body form. The greenhouse features a blacked-out "B" pillar for a coupe-like effect and the integrated decklid spoiler finishes off the rear with a no-nonsense hint at sportiness. To reduce the coefficient of drag (Cd) for the new Impreza, the structures of both models were optimized, contributing to the sharper front and rear end appearance, through uniform airflow.

The low center of gravity and revised suspension systems combine to provide a vast improvement in the car's performance evolution, and also to increase hazard-avoidance capability.

Moving to the interior, richer appointments and details abound, including soft-touch materials for the dashboard, door trim, and center console armrest. Larger door pockets accommodate plastic drink bottles and large maps. Numerous compartments located in and around the center console can hold a variety of personal items, such as smartphones, USB drives, and MP3 players. Controls and switchgear are positioned for optimum user-friendliness, such as the back-to-basic round knobs for channel selection and volume.

I was able to experience both a 2017 Subaru Impreza four-door sedan in Limited trim, with the Lineartronic continuously variable transmission with seven-speed manual mode and paddle shifters. I also spent time in the five-door wagon-like Impreza in Premium trim. Its base sticker read $21,695; factoring in a package that included Eyesight, a moonroof, steering-responsive fog lights, and destination and delivery charge brought the final tally to $24,910.

The 2017 Subaru Impreza sedan and five-door hatch are mechanically the same and incorporate the same improvements and enhancements that provide increased interior room, greater handling agility, and a higher level of refinement. New amenities, high-line trim levels, infotainment technology, and higher-grade interior materials all blend to deliver an enjoyable, heightened driving experience. The new engine is more responsive than the one it has replaced, especially when equipped with the new, seven-speed Lineartronic CVT that provides the response of a manual gearbox.

Acceleration is admirable, handling characteristics are sporty and responsive, while ride quality is compliant and comfortable, with a most pleasant interior ambience. Turbocharging would benefit the Impreza's performance, reducing its effort. When prodded with spirit, it definitely makes its presence known.

The 2017 Impreza sedan and five-door models offer impressive content and value for the price. The five-door happens to be my personal favorite, as it displays a sportier wagon look with enhanced versatility and functionality. Even in Limited trim, the new Impreza delivers a wealth of content without a wealth of monetary outlay.