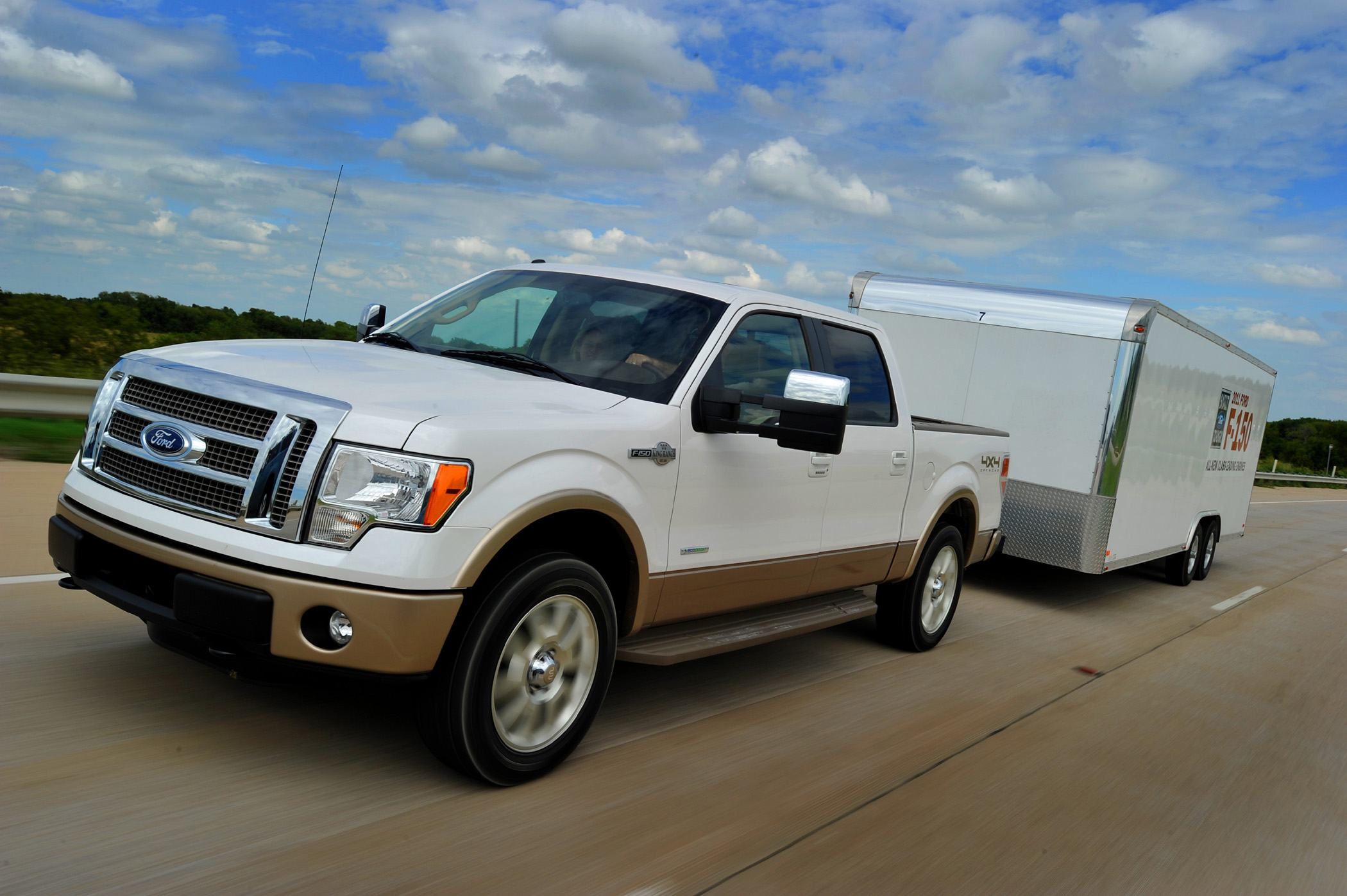 Along with belt buckle-sized badges on the fenders proclaiming its King Ranch pedigree, the pickup wears EcoBoost badging on the lower front doors. This indicates it's propelled by the new twin-turbocharged 3.5-liter EcoBoost V-6 -- a six with the muscle of a V-8 (in some cases more power) and the fuel economy of a V-6.

Estimated fuel economy with the 4x4 is 15 miles per gallon city and 21 mpg highway, and two-wheel-drive models have a 16/22-mpg edge.

"It's the future of truck engines -- the best combination of power, capability and fuel economy," said Mark Grueber, F-150 marketing manager, about the 3.5-liter EcoBoost V-6.

The EcoBoost powerplant fulfills Ford's mission for improved fuel economy with a reported 20 percent improvement over the 2010 F-150's 5.4-liter V-8. It moves the F-150 with 365 horsepower at 5,000 rpm, and burns regular-unleaded fuel. 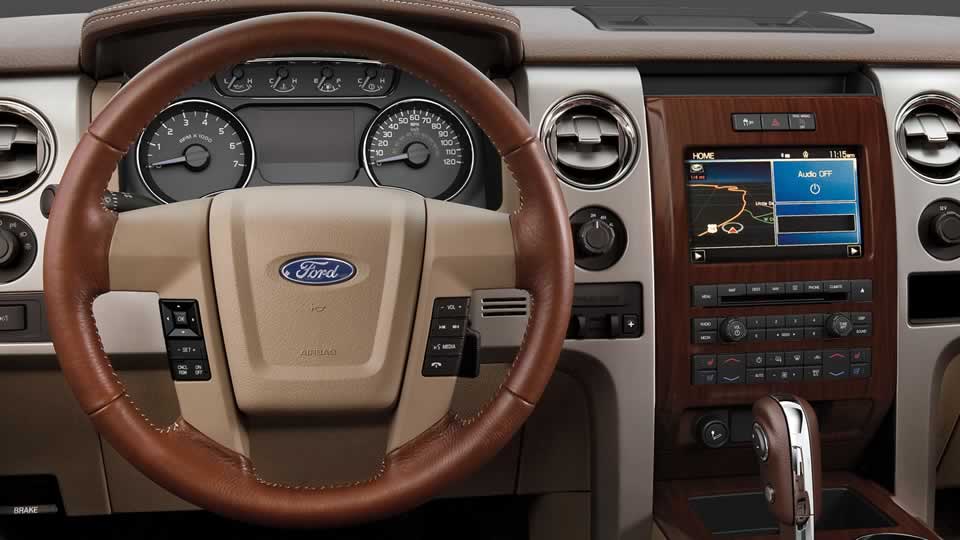 This healthy torque output allows the EcoBoost V-6-powered SuperCrew 4x4 with 6.5-foot-long bed to tow a maximum conventional trailer load of 11,200 pounds and tote a payload up to 1,890 pounds. The 4x2 version can tow up to 11,300 pounds and carry a 2,000-pound payload. A heavy-duty towing package with 3.73 rear-axle ratio (3.15 is standard) is required to achieve these figures.

Part of the formula for boosting engine performance and saving fuel is twin independent variable camshaft timing. Ti-VCT is engineered into the 3.5-liter EcoBoost V-6 to optimize fuel efficiency and performance via creating precise variable timing control of the intake and exhaust camshafts.

The V-6 is paired with a revised six-speed automatic transmission. The six-speed provides smooth acceleration and teams with the EcoBoost powerplant to deliver respectable fuel efficiency for a powertrain with such a high level of workhorse grunt.

When at a full stop, idling is so dead quiet that it gives the illusion the engine stops. Even with the engine revving, all is quiet within the King Ranch edition's luxurious, Western-themed cab. Seats are upholstered in Chaparral leather with driver and front passenger pampered with 10-way-power heated-and-cooled bucket seats. The steering wheel grip is clad in Chaparral leather and can be adjusted via power tilt/telescopic operation. 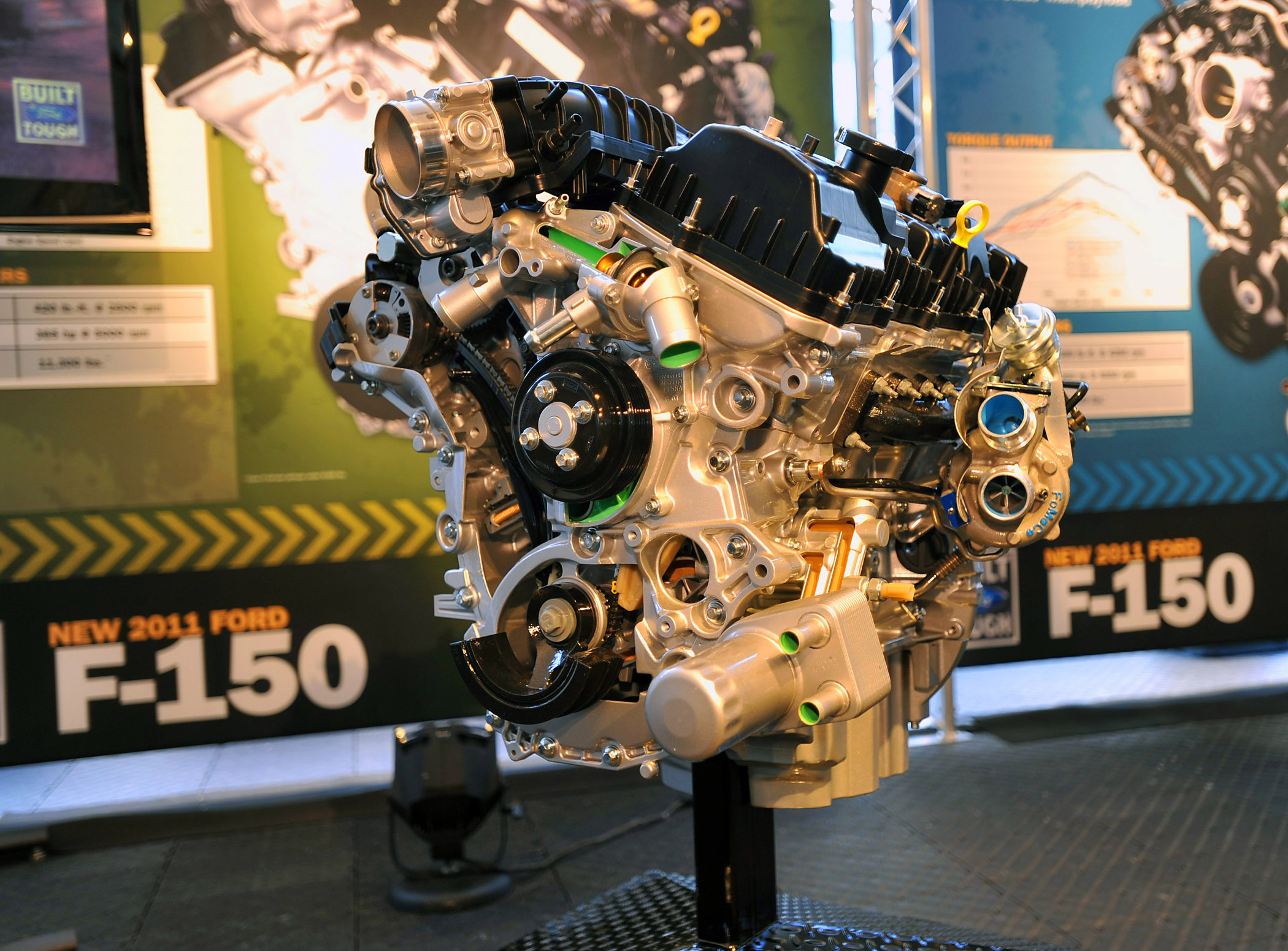 Passengers seated in the SuperCrew's spacious rear compartment sit on 60/40-split seats with a drop-down armrest and cushions that easily flip up to provide extra storage.

The test truck ups luxury and convenience with an optional $995 moonroof and $2,495 navigation system with premium Sony audio.

A polished look is given the King Ranch F-150 with a mesh-filled, chrome-framed grille, and distinctively styled wheels. Standard are seven-spoke, 18-inch aluminum alloys with King Ranch accents on the center caps. Eye-grabbing 20-inch machined-aluminum wheels with jewel gold-painted accents are a $595 option.

With 20-inch wheels and 4x4 clearance, the standard accent-colored platform running boards are much needed. Six-inch chrome angular running boards are a $695 option. Adding convenience when loading cargo over the bed sides, the test truck is fitted with retractable box-side steps that add $325 to the price tag.

Standard are a locking, removable tailgate, and a power-sliding rear window with a defroster and privacy tinting.

Along with boasting luxury and powertrain efficiency, Ford's 2011 Ford F-150 SuperCrew has been named an Insurance Institute for Highway Safety Top Safety Pick. 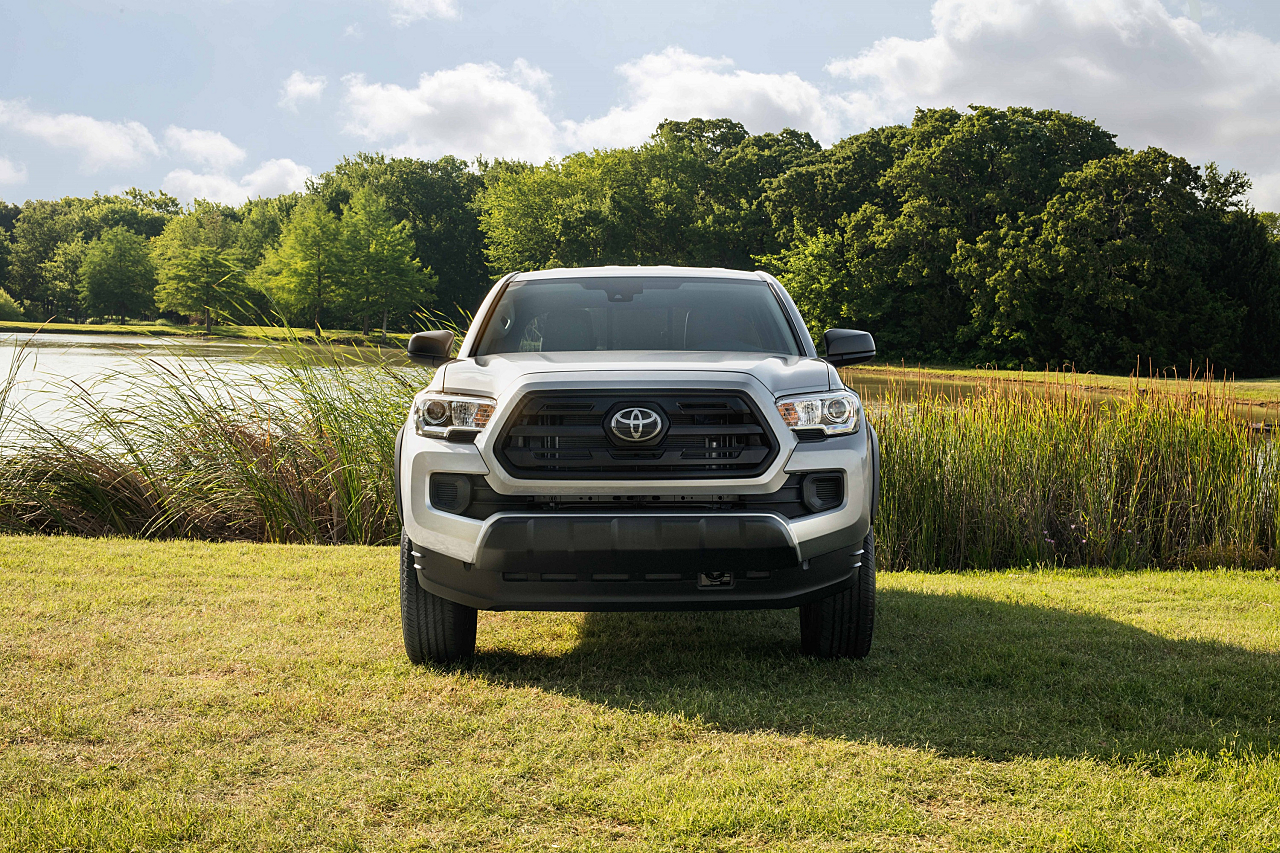 Despite the offering of aggressive-looking, off-road-tough models by all midsize pickup manufacturers, Toyota stands apart as having an entire Tacoma lineup that's skewed toward young male adventure seekers. 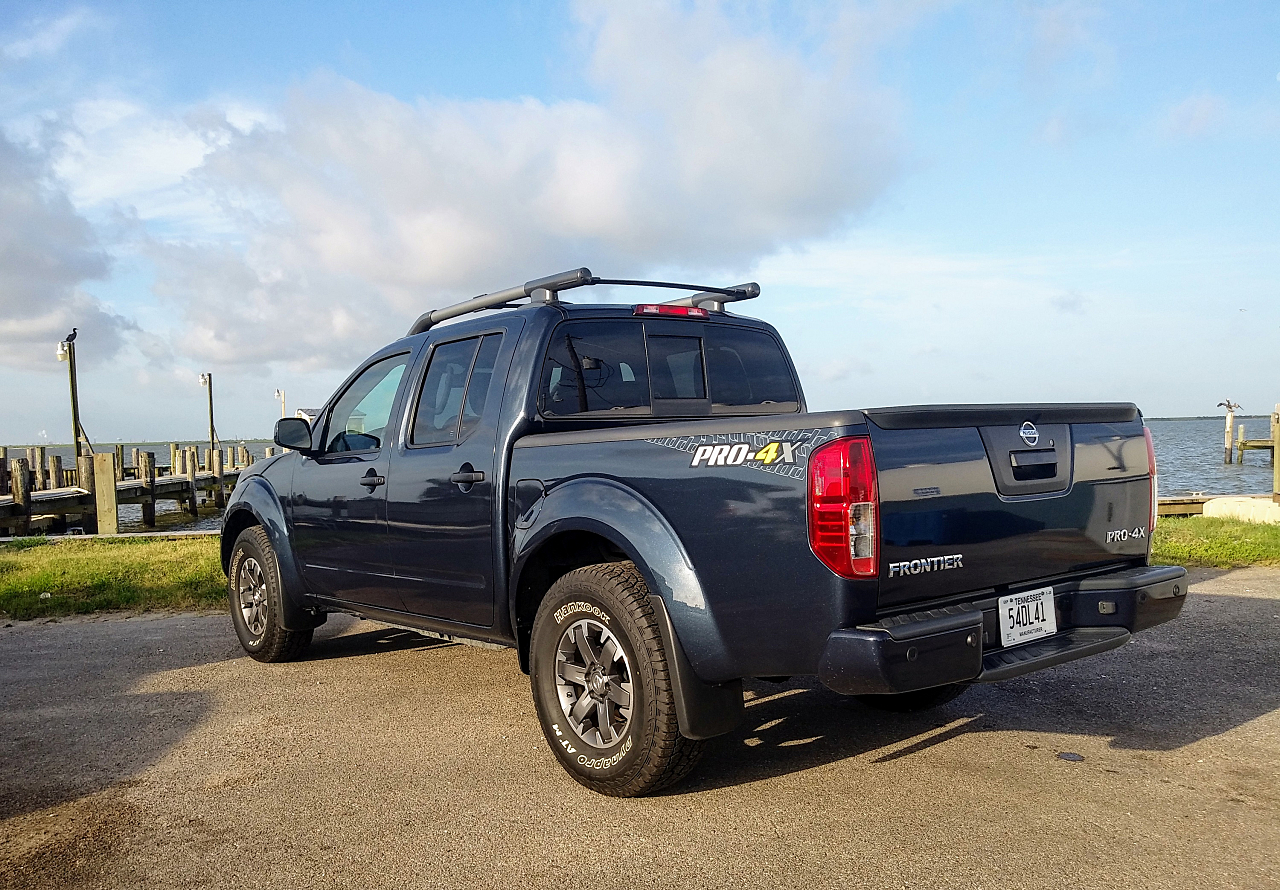 Nissan has a long history in the U.S. pickup market, and its Frontier is distinguished as a solid, consistent competitor. The 2019 Frontier is the oldest truck design on the market and remains the "standard bearer of Nissan truck heritage." Upgrades for the 2005 model provided the basis for the Frontier on sale today. 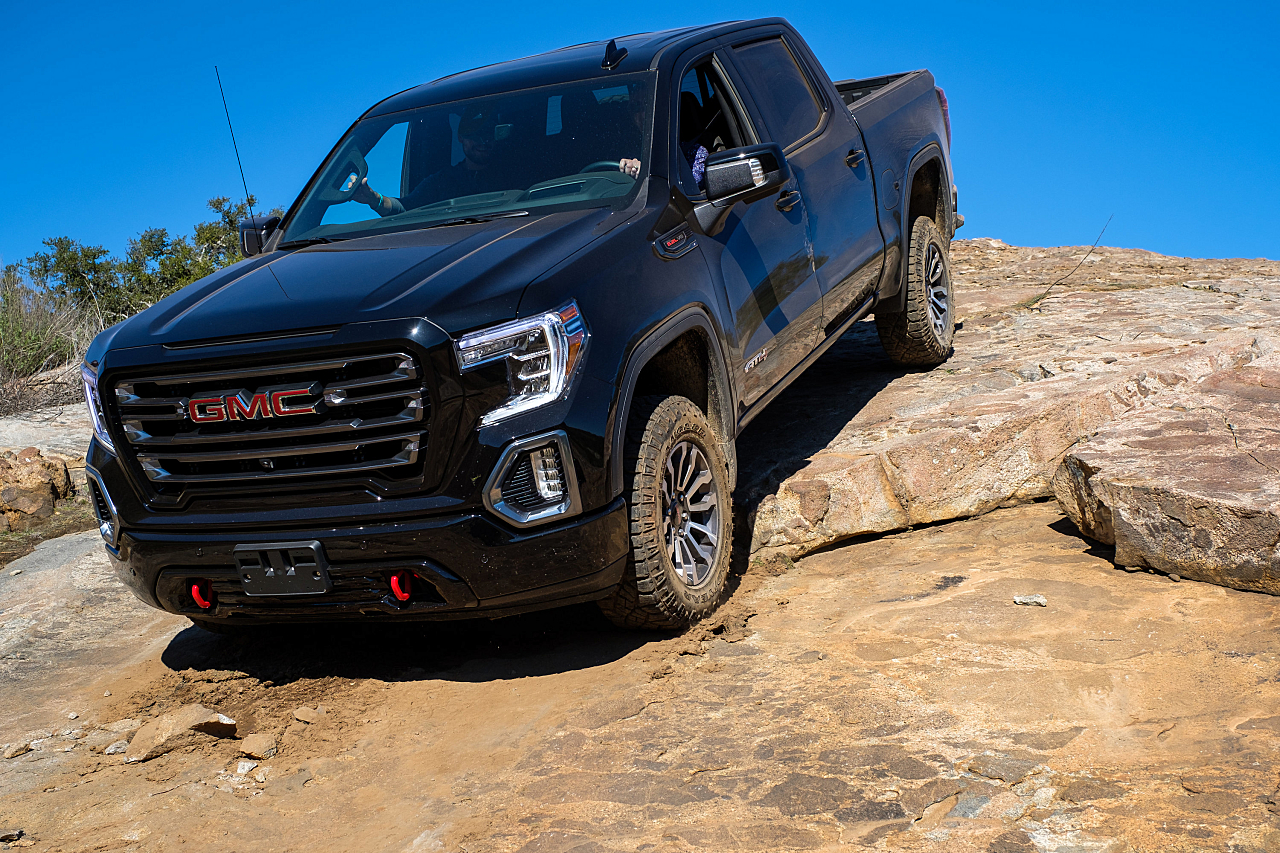 Premium trucks and those with exceptional off-road capability are in high demand. GMC addresses this demand with its 2019 Sierra AT4 1500.